i need someone to dress me

the hub managed to rally and get himself feeling back to normal in time for our planned date night. actually, it was a double date with one of his friends from the cigar lounge and his wife. it was a nice change to head out for an evening with another couple, and after a little deliberation, we ended up at this place on sunset boulevard: 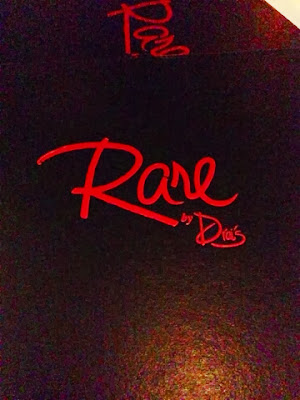 i hadn't heard of it before, but a little yelp research told me that it used to be the location of blt steakhouse and is a great spot for spotting celebs. except that saturday night doesn't tend to be a great time for stargazing, so i had zero expectations for any fun sightings.

i had had the teen help me figure out what to wear, with a lot of wisecracks on the side from the hub. this was no easy task, people. my closet is half full of workout gear, and the other half...well, i'm a stay-at-home-mom. there is nothing remotely sexy or trendy in there, and definitely not much worthy of a night out in hollywood. i ended up clad in a pair of skinny jeans (that don't really fit me right anymore and are baggier than they should be), a white tee, black fitted blazer, chunky necklace and an old pair of stiletto platforms. it sounds good types out, but trust - my ass was completely "mom" looking and dowdy as fuck. it was so bad that i have not even one picture of myself from the night.

since we're nobodies and were probably lucky to get a reservation at all, when we arrived the place was empty. literally. like, we were the only patrons in the whole joint. granted, we were eating like old people, arriving at 6:30. that's actually our normal dinnertime, but in west hollywood, that's practically 4 in the afternoon. heh. given the choice between the dining room and the enclosed patio, i opted for the latter. i figured there would at least be a little bit of peoplewatching from our table facing the street.

the menu offered all sorts of delicious sounding tidbits, and we decided to start off with some white shrimp sautéed with lemon and garlic, plus some lovely burrata with tomatoes. 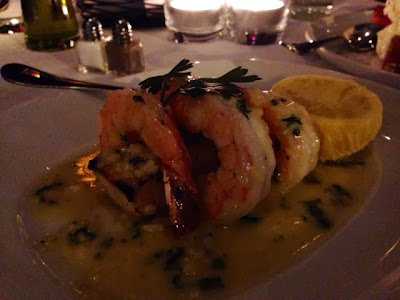 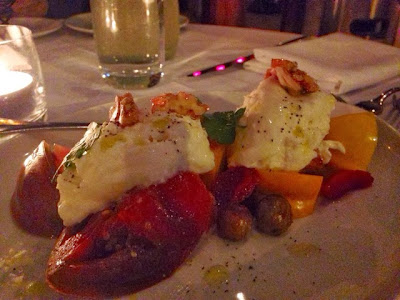 i'm pretty sure that my husband isn't really a fan of burrata, but orders it to make me happy. he's a keeper, that one.

because it happened to be national margarita day, i decided to celebrate. 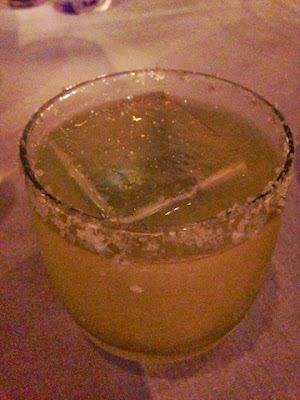 i liked the giant ice cube in the middle of my drink, and poked at the ice sphere served in the hub's scotch. 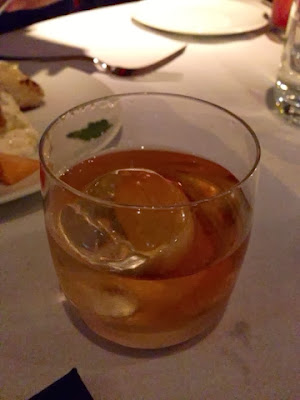 also, scotch. my husband drinks scotch, smokes cigars and wears sport coats. i'm seriously married to an 80-year-old man. and here i'd always thought i was the oldie in this relationship. newp.

as we sat and chatted about all sorts of things, we noticed a flash go off outside. a bentley had pulled up at the valet and a couple was walking briskly towards the door, with a photographer scurrying in front of them to get as many shots as he could snap off. i didn't recognize them at all, and our server hadn't seen them arrive. oh well. she said she thought it might be the maloofs, former owners of the sacramento kings and current owners of various vegas hotspots. oh, and i think some of them are on "real housewives of beverly hills." i don't watch that show, so i didn't really care much.

a few minutes later, though, we saw more flashes and this time, i had a better view of who it was. the big hair, trim figure, and the dog in her arms told me that it was another RHOBH cast member. although my us weekly studying failed me and i couldn't remember what her name was. 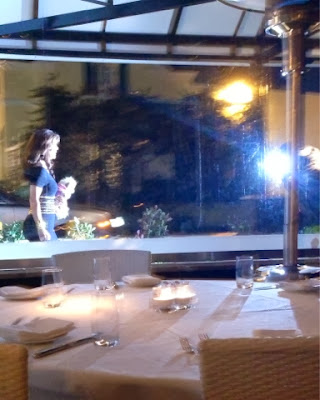 yes yes, i know now that it was lisa vanderpump. whatever. i really didn't care much since i'm not a fan of the show and besides...the food had just been served.

chilean sea bass for me: 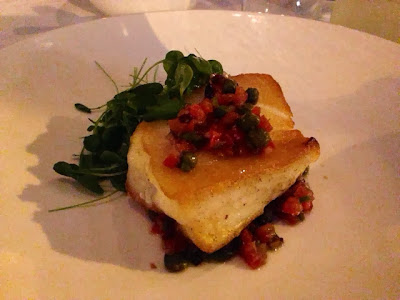 peppercorn filet for the hub. 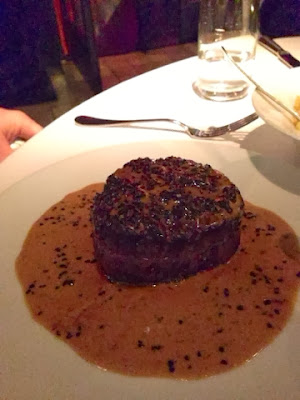 we'd ordered some asparagus and broccolini as sides, but those weren't anywhere near as delicious as these - lobster mac & cheese and truffled lobster mashed potatoes. damn. so good. 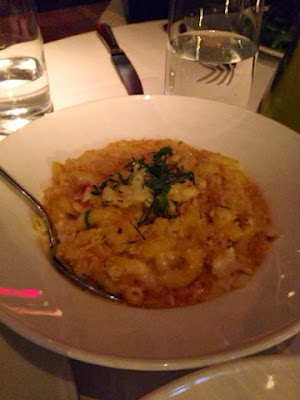 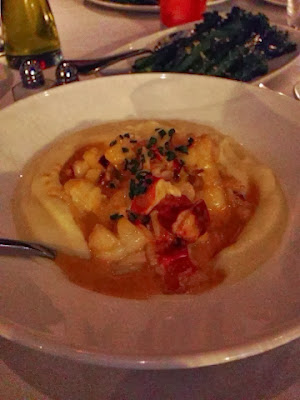 even though i stuffed myself silly, i couldn't pass up dessert. do i ever?  we ordered "milk and cookies": 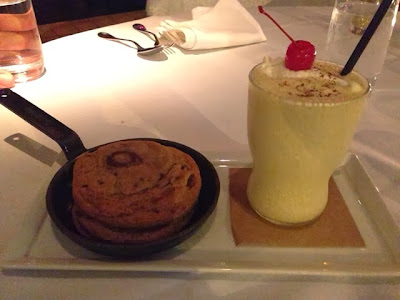 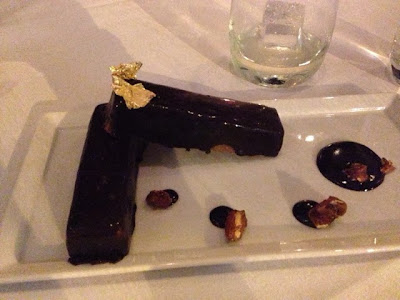 outside, we chatted up that paparazzo, who happily showed us the photos he'd taken. 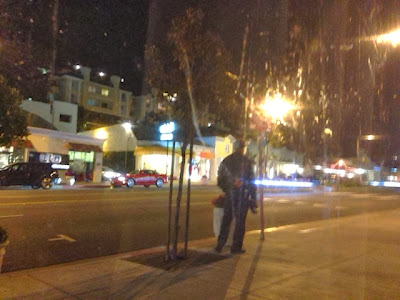 turns out the maloofs weren't there, but the couple we'd seem walk in was part of the "shahs of sunset" cast. yet another show i can't get it up for. i always thought i watched a lot of tv, but i guess my addiction isn't as bad as i thought.

we hung out at bar marmont for a little while before heading to a new-ish place called no vacancy. 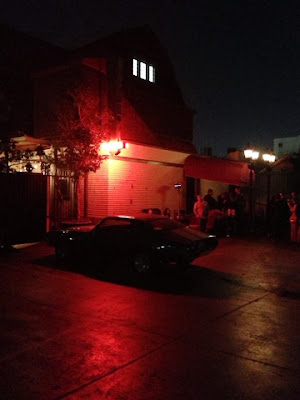 the hub had heard that this was a restaurant-slash-bar-slash-cigar lounge and wanted to check it out. but do you see that up there? yeah, there was a line to get in. and it was totally one of those shitty places where the bouncers look you up and down before deciding whether to let you in or make you wait. clearly, we didn't look cool enough for immediate entry.

after chatting it up with some dude who tried to make himself look important as he chatted busily on his phone and gestured to the bouncers, the hub learned that there were no cigars to be found inside after all.

and because we were a group of olds with kids who keep us on a schedule, we were all pooped and ready to head home.

Email ThisBlogThis!Share to TwitterShare to FacebookShare to Pinterest
Labels: date night was fun, dressing myself is hard