a whole other level of disney freakishness

still somewhat fresh from our visit to the walt disney family museum, i decided to take the old lady out for a dinner date, just the two of us.  dine l.a.'s restaurant week was going on, and there was a restaurant out in the atwater village area that i thought she might be interested in.

the tam o'shanter is one of the oldest restaurants in l.a., built in the 20s by a couple of guys who went on to start van de kamp bakeries and the lawry's chain of restaurants.  it also happens to be located down the street from walt disney's first studio, and where he dined on a pretty regular basis. 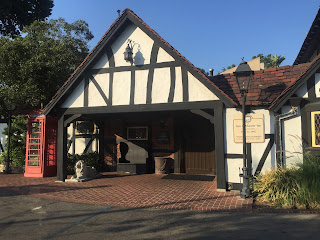 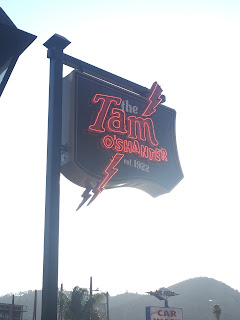 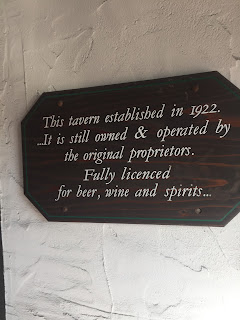 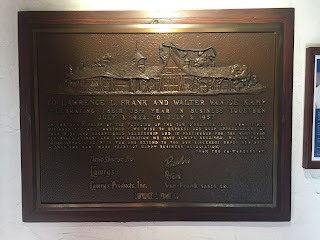 so because we are disnerds, i put in a request to be seated at table 31...which, of course, was old walt's regular spot.  and because we got there at a somewhat early-ish hour, the table was available for us when we arrived. 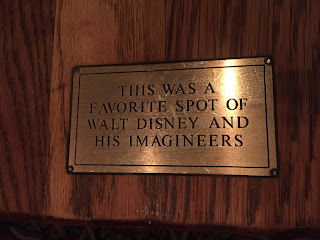 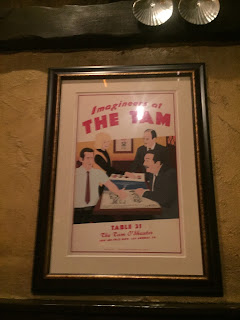 as you can imagine, the restaurant looks like an authentic scottish pub.  there's a collection of family tartans and other scottish and english decorations everywhere. 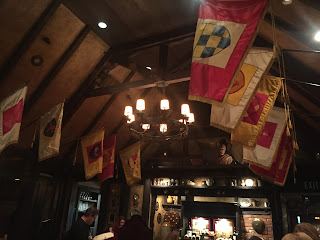 the menu gives you a little history lesson about the restaurant, which i always find interesting to read. 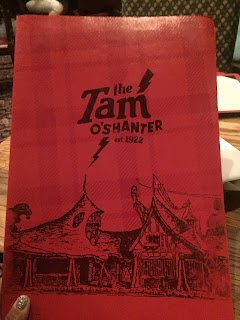 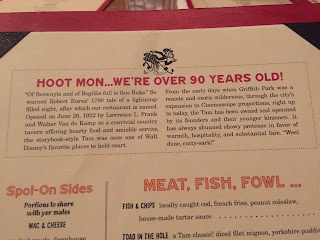 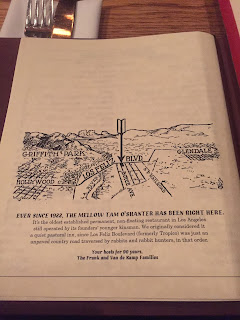 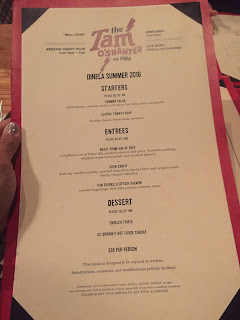 just like at any other lawny's-owned restaurant, their special seasoning is on the table. 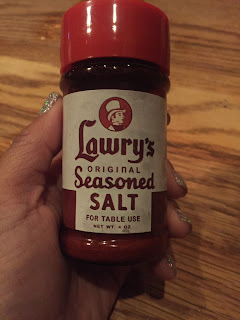 i ordered an adult beverage and sat in the very spot where walt used to hang out and peoplewatch as he chatted with his imagineers and planned his eventual world domination. 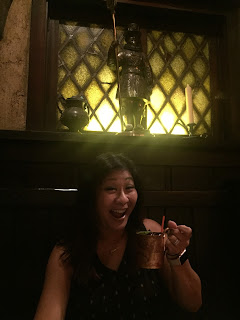 we decided to share a charcuterie plate, because meat and cheese.  duh. 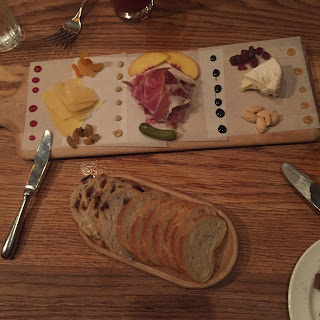 and my starter was the summer salad, because burrata. 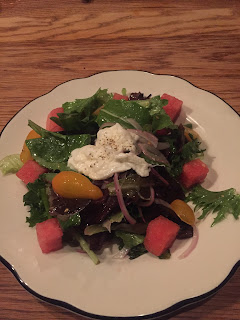 as we ate, we realized that the table was decorated with etchings that looked like cartoons and things. i asked our server about them and he said that because this was walt's favorite table, disney imagineers took it to the studio a few years back (who knows if this is 5, 10, or 50) and disney'ed it up.  other folks online have mused that these etchings were done by walt himself, but it seems that was not the case.  they don't photograph very well, especially with just an iPhone, but you get the gist.  otherwise, you should totally go to the tam o'shanter and request table 31 so you can see for yourself. 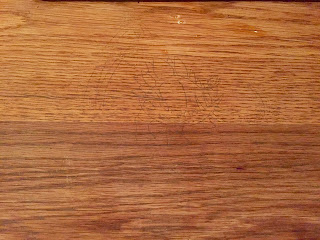 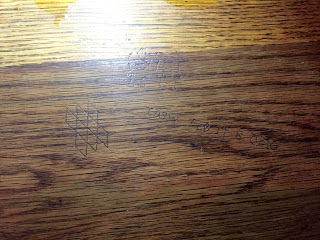 the prime rib was served with mashed potatoes, creamed spinach, and yorkshire pudding just like i'm used to seeing at the lawry's restaurant in beverly hills.  it's always delicious and filling.  i gotta say though, since they post a lot of their recipes online, it's pretty easy to recreate this at home. 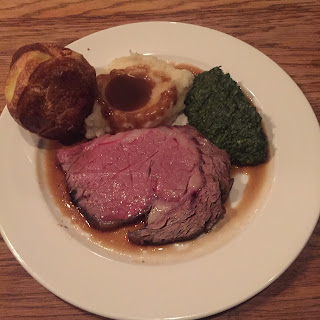 dessert was a c.c. brown's hot fudge sundae.  c.c. brown's was another old l.a. eatery that was known for its celebrity clientele, sweet location on hollywood boulevard, and apparently where the hot fudge sundae was invented.  this one was good, although nothing particularly special other than where we were eating it, i guess. 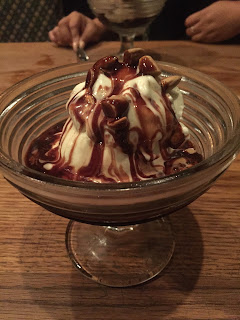 we saw this framed cartoon on the way out, given to the restaurant by disney studios when they celebrated their 75th anniversary. 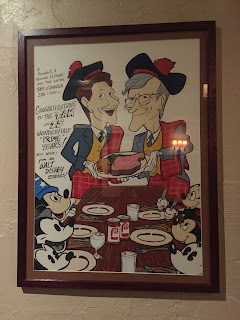 when walt came to l.a. back in the early 20s, he lived in a little garage in the los feliz area that belonged to his aunt and uncle.  he eventually started working on cartoons there, making short films and pretty much building his first "studio" in there.  the garage itself has since been relocated to a museum in garden grove, after the new owner of the house initially decided to demolish it.  and the property has changed hands a few times over the years, mostly used as a rental to young couples and college kids and such.  i'm betting that most of those renters had no idea as to the history of the place.  anyway, the home was recently purchased by a couple who put in an application for a permit to level the place so that they can build a new house on top of it.  it was actually declared eligible for the national register of historic places, but maybe it slipped through the cracks since it hasn't officially been deemed as such yet.  once the disney fans and conservation-type people got wind of it though, a 75-day hold on that demolition permit went into effect right away and now they're all trying to figure out what to do.

it was getting late when we found the house, so this is all we were able to see: 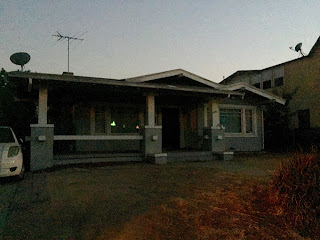 and then we decided to go see the location of disney's hyperion studio, where he opened his first actual studio outside of that garage.  it wasn't very far away and has since been turned into a grocery store.  i'd read that there was some sort of signage that would tell people what used to be there, but we walked around the entire interior and exterior of the place and found nothing. 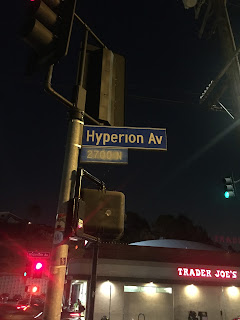 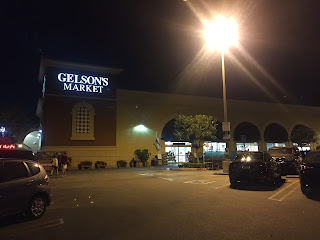 there are lots of other disney-related spots around town to see, like the side-by-side homes where he and roy moved with their wives and the barn where he tinkered with his toy trains.  his carolwood estate, where he and his wife lillian built their forever home, was demolished a year after lillian died, although we would totally still go just to see where it used to be.