hanging out with princess anna

i was hanging out at home minding my own business when i took a peek at my twitter feed and spied something that caught my eye: 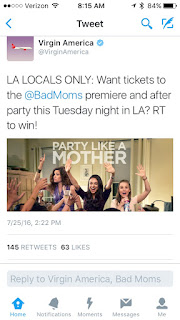 so, of course, i followed instructions and hit "retweet."  and then as i usually do, i promptly forgot all about it until i went back a little later to see if there was anything interesting going on.  a notification that said i had a direct message came up, and when i clicked on it i was super excited to find this: 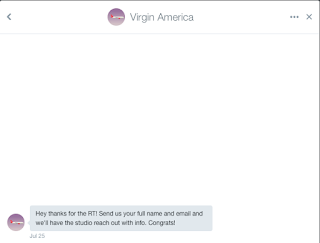 talk about great timing, man.  with the bean at grandma camp, i didn't even have to scramble for childcare, which can be really tricky with such short notice.  this was happening literally the very next day.  and the very first thing the old lady and i thought of was...what the hell were we going to wear to this thing?  it's not like we're regulars at things like hollywood premieres.

we made a beeline for the mall (maybe two malls) and although there wasn't really much that caught our eye, we managed to find something we thought might be suitable for the occasion.  you know how when you go shopping and don't really want or need to buy anything, the stores are jam packed with all sorts of awesome stuff you love?  and then when you desperately need something, you can't find a damn thing you like?  yeah, that.  ugh.

the premiere was in westwood, which is kind of insane to get to from our house.  especially on a weeknight, when the traffic is super intense and annoying.  we gave ourselves plenty of time (or so we thought), and with about half an hour till the time that we'd been given to arrive, we saw this: 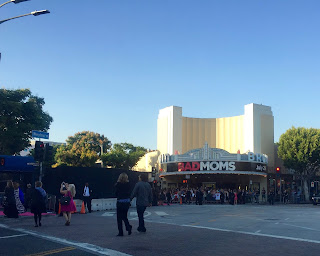 there were so many people out - paparazzi, lookyloos, people just trying to get from point a to point b.  finding parking at the lots we'd been told were available was miserable, because they were all full. we somehow managed to find an empty spot a couple of blocks and through a whole foods parking lot away, and made our way towards the will call desk we'd seen as we frantically drove by in search of a place to leave the car. 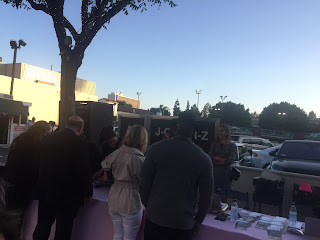 there was this fun photo op, but we didn't have time to stop. 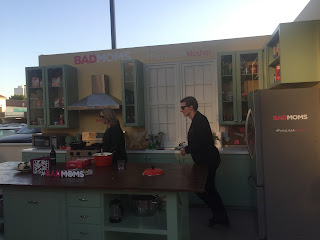 yay for getting our tickets in time! 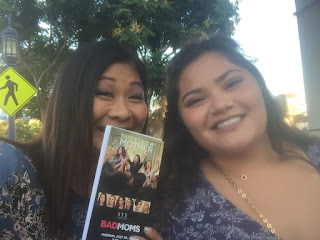 finally, we were there.  on the pink carpet.  alas, not with any of the celebs in attendance, but that's okay.  it was cool just to be there. 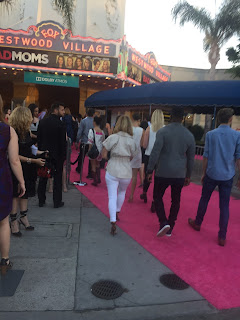 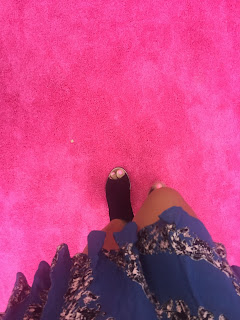 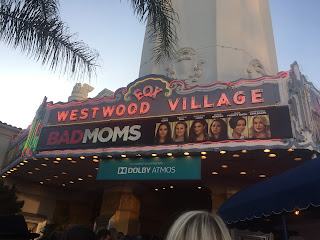 if you look in the middle of this picture, you'll see a tall dude with his head down wearing a gray hat. see him?  it's dax shepard! 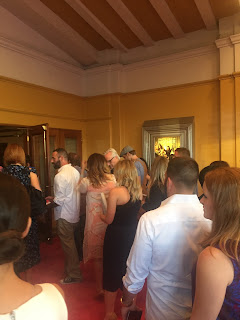 on our way into the theater, we grabbed our free popcorn and soda.  we were both really hungry and hadn't had time to stop anywhere for dinner first. 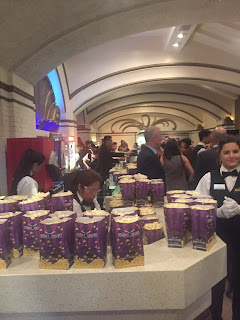 finding a seat wasn't too hard, although since we'd arrived so late we were stuck off to the side way up front. 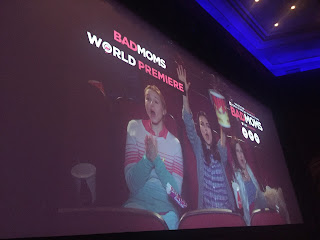 the old lady had spotted one of her favorite comedians, chris d'elia, as we were making our way to our seats.  she was so excited and had to call her special friend to tell him who she'd just walked past. 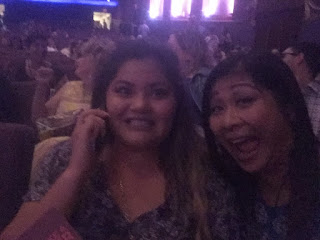 oh, did i mention?  we were also invited to the afterparty.  you know, no big deal. 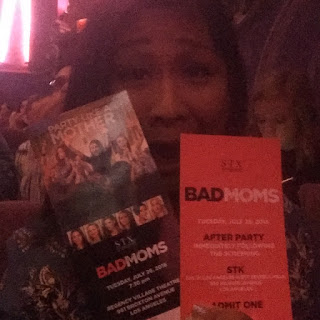 from inside the theater, we got to see what was going on outside with the stars of the movie out on the real red carpet. 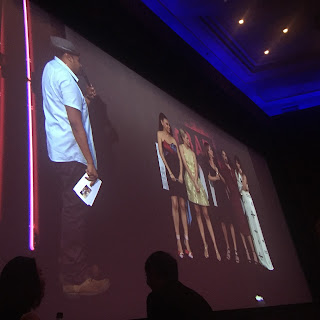 and then they all came inside and stood at the front while their director came out and said a few words about the movie. 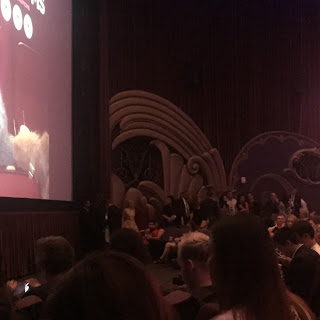 see that shadowy figure in the middle?  that's twitch from "so you think you can dance" and the ellen degeneres show. 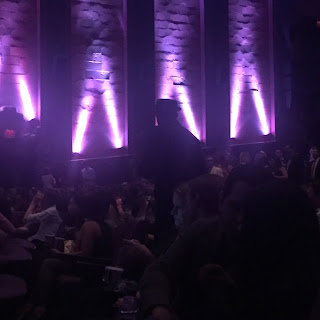 and then taking a seat behind us was kendra wilkinson. 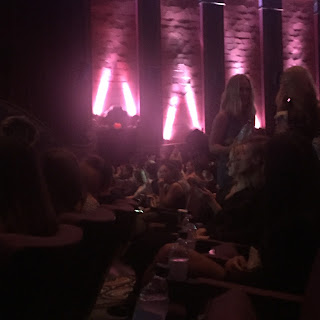 the cast came up to speak to the audience too - mila kunis, kristen bell, kathryn hahn, and christina applegate.  i guess jada pinkett smith wasn't available. 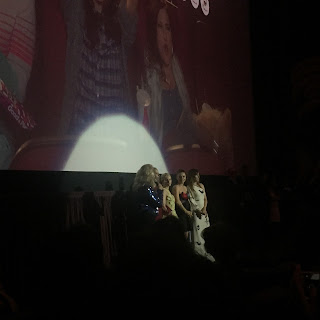 you probably know by now that the movie is hilarious.  the old lady and i gigglesnorted pretty much all the way through it.  and when it was over, we made our way back out to find the car and get to the W for that afterparty.  there were still tons of people outside, waiting to catch a glimpse of the celebs. 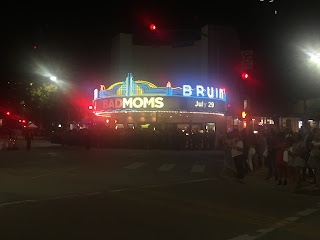 the W was just a mile or so away, and it only took a few minutes to get there.  they took our tickets at the entrance and then we were in.  with our growly stomachs, we made a beeline for the buffet. 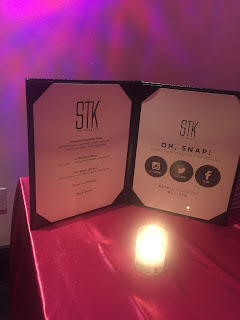 and then we managed to find a seat with a great vantage point of everyone walking in and milling about.  it was already pretty packed in there with folks who looked like they might have been part of the crew, some who looked like administrative/office-types, others who were really trying to be part of the hollywood scene, and a random table full of older asian ladies.  well, and then there was us.  ha. 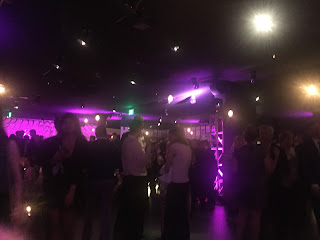 that guy in the white shirt and baseball cap is russell simmons.  he's the only recognizable face we saw the entire time we were there. 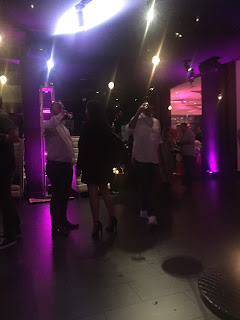 when we decided that we were tired and ready to go, we headed towards the back to see what was there.  that's when we realized why we hadn't seen any other celebs...they were protected behind the rope. 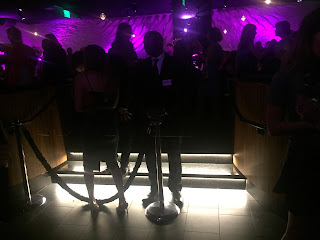 we never did make it to the bar, either.  losers. 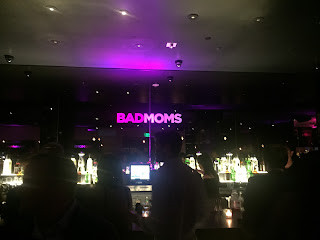 one last look around: 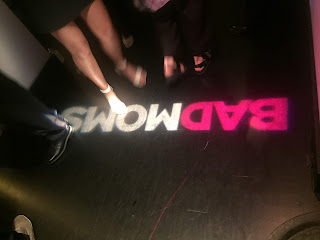 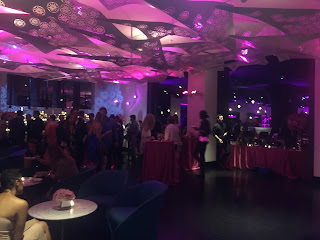 and that was that.  not a bad way to spend a tuesday evening, huh?  thank you, virgin america!  it was pretty fantastic!
at August 18, 2016

Email ThisBlogThis!Share to TwitterShare to FacebookShare to Pinterest
Labels: contest winners, going to the movies, partying with "celebs"