one of my most favorite local runs is the awesome 80s 5K, put on by the same folks who organize the hollywood half.  it's at the rose bowl in pasadena, which is a pretty familiar venue for me since i often make the trek out there to do my last long run before a half.  it's so easy - each loop is exactly 3.11 miles, which makes it foolproof when it comes to figuring out a training run.

the only snafu this year was the "sand fire," which had started really far away in the santa clarita area, but whose resulting smoke and ash had managed to drive way east in our direction.  the air quality was pretty horrible, and even though i probably shouldn't have, i headed out for the run anyway. 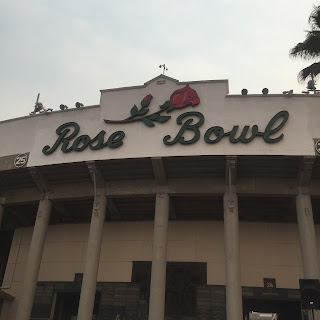 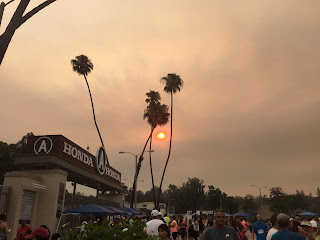 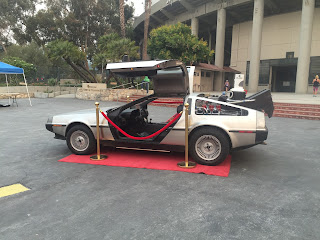 pretty gross, huh?  but you can also see by the crowds that there were a ton of other crazies like me who'd decided to take it on anyway.

you know i never turn down a chance to dress up for a themed run.  i'd actually had a little trouble deciding between four separate tees to wear: 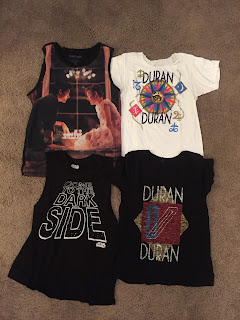 i posted that picture on social media asking for votes, and an overwhelming number of folks picked the "sixteen candles" one.  and so i busted out my fingerless fishnet gloves and threw my hair up into a side ponytail with a scrunchie.  as i walked from my car to the start line, i realized how much of a pain in the ass it might be to run with my hair like that. 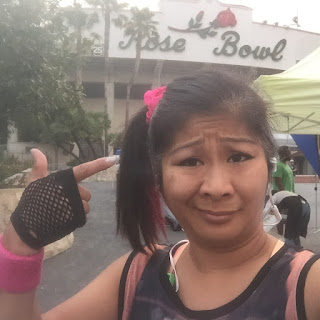 i was early, so i walked around checking out the various vendor booths and stuff.  and with no line at the delorean, i took advantage of the photo op that i knew would be super popular later on. 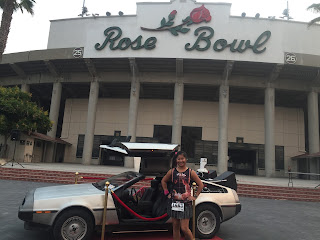 and i made a mental note to come back here for a post-run treat: 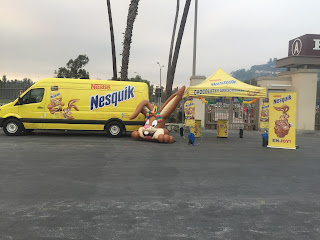 there were tons of great costumes out there - leg warmers, scrunchies and neon colors as far as the eye could see.  these guys took the cake, though: 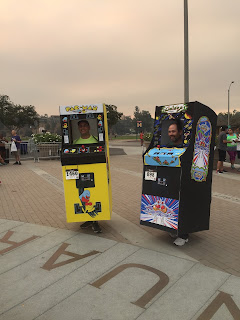 i found one of my buddies near the start line.  i was thinking back and realized that i don't even remember how we first met, heh. but i've done cookies for her, we've both done the stella & dot thing, and she does a lot of local races like these too. 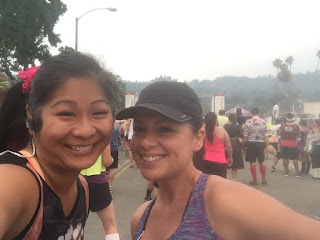 time to get this party started. 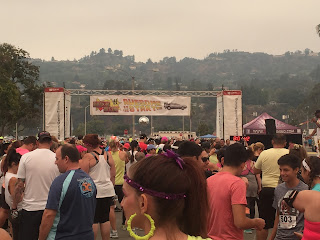 after a warm-up by my friend mark and a few quick announcements by our race director - you may also recognize him as the "free hugs guy" - we were off. 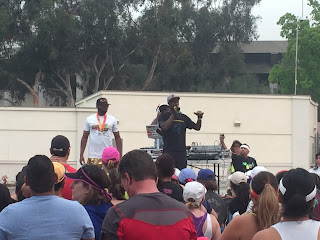 there's not really much to show you at the rose bowl loop.  it's literally just a loop around the grounds, the golf course area and the parking lots.  here's a couple of mile markers instead: 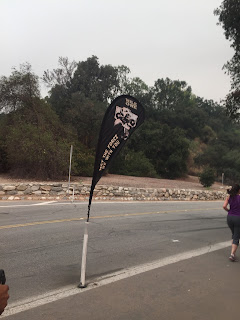 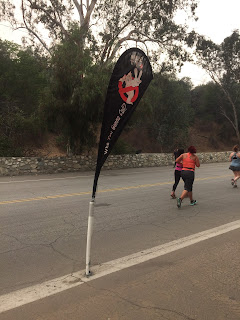 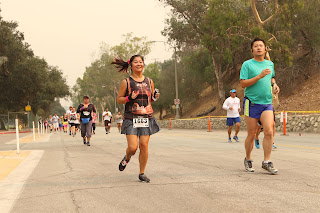 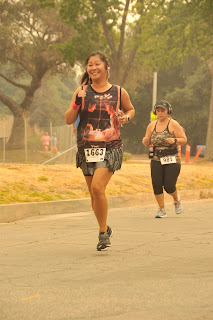 the air really was pretty terrible, so i tried my best to just get through it and not die.  i stopped to walk a lot of it though, so it took me a lot longer to finish than i normally would.  and i was extra happy to get to the finish line. 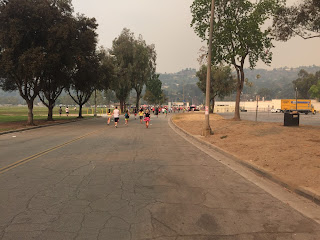 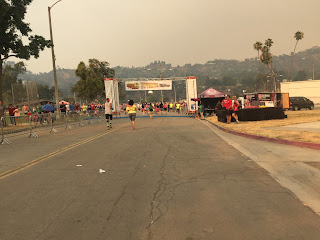 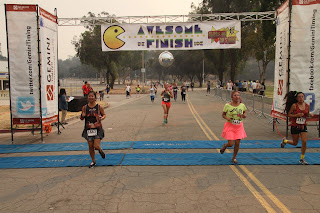 i joined the line for post-race snacks: 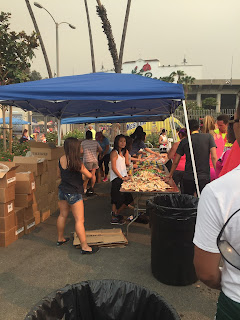 it really annoys me when i see people who clearly didn't participate in the race loading up on free shit at the finish.  jerks like this bring giant tote bags and head right for the stuff that's been provided for the runners and grab handfuls of stuff that doesn't belong to them.  and so there are lots of times when i'll read reviews later on by runners complaining that by the time they got to the finish, all of the snacks and water bottles and such were all gone.  that sucks.  i did say something to her, but she just looked at me and walked away with her full bag.  i. hate. her. 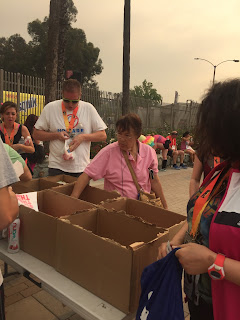 i got my chocolate milk, though. 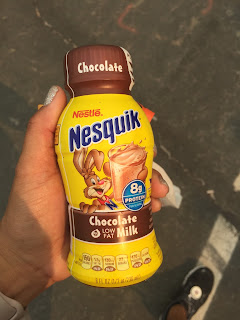 and my sweet ass bling. 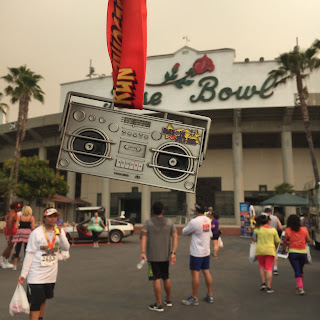 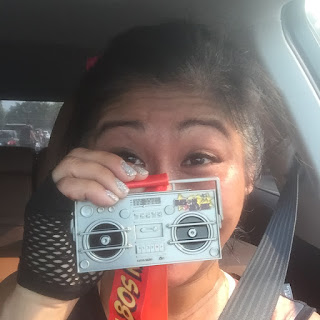 when i got home, i had just enough time to clean up and get ready to take the bean and MIL to the airport for their now-annual "grandma camp."  i was dreading having a full nine days without hugs and kisses from this love bug: 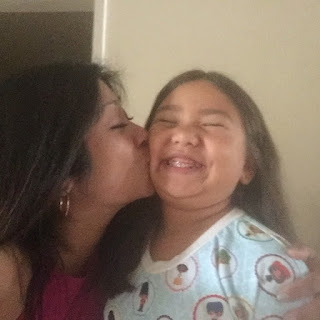 and got one last hug and selfie at the airport curb. 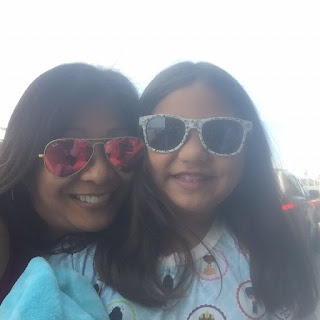 i did well this time, though.  last year i sobbed all the way home...but this time i managed to stop crying way before that.  maybe next year i can go tear-free completely!

Email ThisBlogThis!Share to TwitterShare to FacebookShare to Pinterest
Labels: running my ass off, the bean goes on vacay