my co-leader started a nonprofit organization a few years ago that took her couponing habit and turned it into helping mothers and families by providing basic daily necessities.  you know, stuff like toiletries, household goods, etc.  they just finished a back-to-school drive where they provided backpacks stuffed with school supplies for 500 kids, and they're gearing up for the holidays, where they'll hand out gifts for families who may not be able to afford them otherwise.  the old lady has been working as her assistant for the last few months, and i think she's learned a lot of valuable skills she'll be able to use in whatever career she chooses in the future.

i've helped them out before with local fundraisers that they participate in that funnel donations that help purchase their supplies and fund their events.  they hooked up recently with a company that provides staffers for concession stands at the rose bowl for their various events.  so basically, you get people to volunteer to work with you at a beer stand or a churro cart or something and your organization receives a percentage of the sales during that event.  one of those opportunities came up while the bean was at grandma camp, so i decided to join them and help out for the evening.  the event?  a soccer game, pitting manchester vs. chelsea.  i know zip about soccer, by the way, other than what the bean does with a bunch of other 8-year-olds.  heh.

the old lady and i arrived early and parked with the rest of the vendors on a stretch of the golf course that surrounds the rose bowl.  it was a typically hot southern california summer day, but we were required to wear long black pants and closed-toe shoes.  because we were fairly early, we managed to score a pretty decent parking spot not too far from where we had to check in. 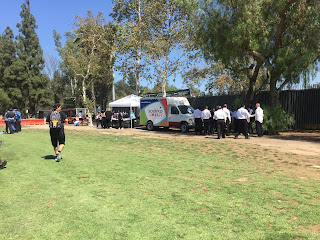 honda is the major sponsor for the rose bowl, and all of the concession stand staffers are handed a blue polo shirt and cap to wear during their shift.  check us out: 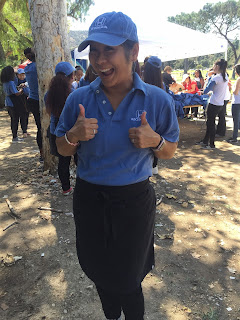 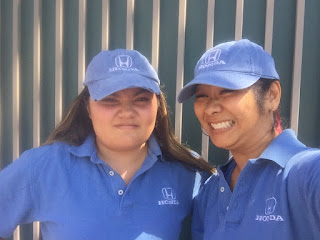 yup.  i got to dress up as a "helpful honda guy."  i found this hilarious, although as the night wore on and i kept having to field stupid comments like "hey, since you're the helpful honda guy, can i have my beer for free?"  pfffft.

we were assigned to beer trailer number 5. 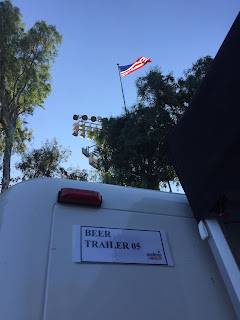 this is what we were serving: 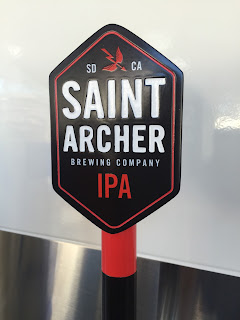 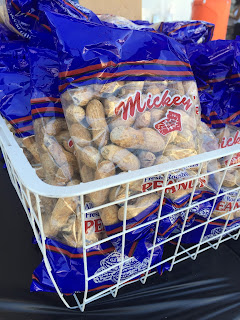 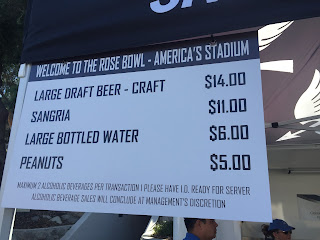 i know nothing about craft beer, guys.  and neither did any of my cohorts.  we totally looked up that beer online so that we'd know exactly what it was we were serving.  heh.

perks of volunteering - two free food items from the permanent concession stands and all the soda you can drink.  thank goodness they're a coke venue, because pepsi is the nastiest shit on the planet. 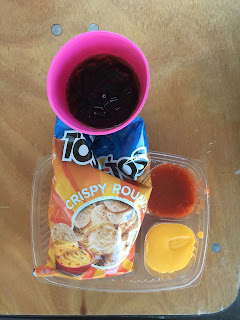 we even scored one of the free t-shirts they were handing out at the gate.  i didn't want to take one at first, because those are supposed to be for paying attendees, but they insisted that they had more shirts than ticket holders.  so, yeah, okay. 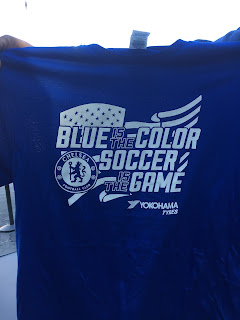 this was our view for the night: 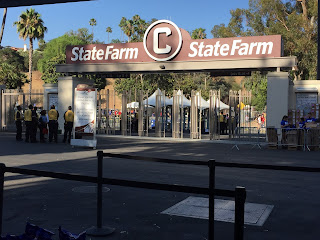 and then at 6:30, the doors opened and people started flooding in. 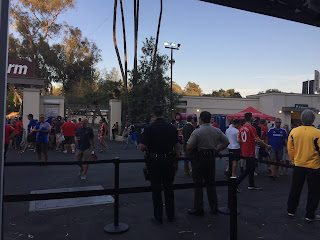 it got busy really fast.  soccer fans are pretty rabid, and they sure love to drink.  half of them didn't even know what we were serving, but as long as it had some sort of alcoholic content they didn't really care.  the old lady and two other volunteers worked at the taps, pouring the beer as fast as they could, while i cashiered and served those cups of beer along with three others.  i splashed beer all over my hands and a little by my feet and was sticky for most of the night, and we ran out of beer out of all three taps at least twice during the 3.5 hours we served it.  and those soccer fans were generous with their tips, by the way.  we were tossing dollar bills into a cardboard box that we counted out and split at the end of the night. 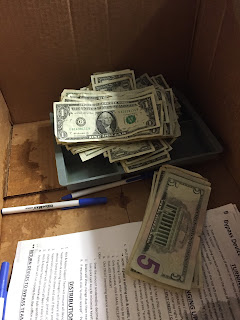 it was quite the process to shut down.  we had to count every remaining cup, water bottle and bag of peanuts to make sure our inventory matched our money.  it took a while to get the money all counted and turned in with the all clear, and we managed to come out even (which apparently isn't always the case).  we turned in our hats and shirts and got the hell outta dodge. 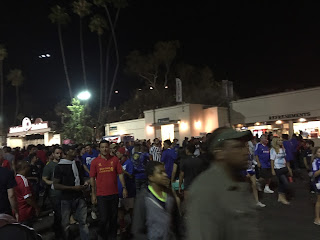 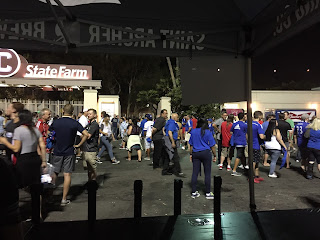 all in all, i think we took in almost $12K in sales.  i'm not sure how much the nonprofit receives from that, but hopefully enough to make a difference.