the bean did her very last run disney kids' race this weekend.  she's officially aged right out of the oldest category, and so now if she ever wants to do another run disney event she'll have to suck it up and run a 5K.  those are billed as "family fun runs" though, which means it's not a timed race and it's totally laid back.  maybe one day.

although we ended up doing a little circling as i stupidly thought i could park at downtown disney, which i couldn't.  and there was an assload of traffic on the street trying to get back to the parking structure, which is where i should've gone to begin with.  it was already past 8:30 by then, and even though i knew there was plenty of time since the kids are in the last group to run, i was panicking a little about being late.  i HATE being late to stuff.

of course, we made it in plenty of time.  we met up with our friends at the entrance to the corral and gave mini cee her bb8 dress.  lilcee and i had worked on it together a few weeks ago using my die cutter and heat press, and it turned out really cute: 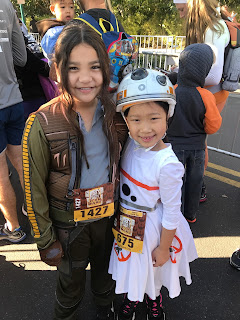 as expected, there was plenty of time to kill standing around waiting for the 100-meter and then 200-meter races to finish up.  our kids were doing the 400-meter for the first time, which we'd avoided in the past but they've grown up so much that they wouldn't have gotten away with the younger group this year. 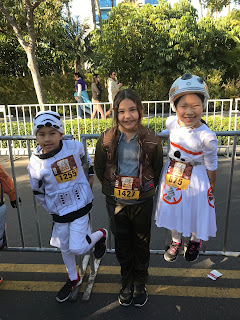 i managed to get at least one shot with my little runner. 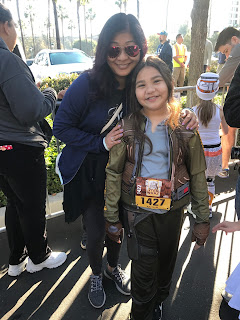 we spotted this guy running around with this crazy looking camera that looked like it was straight out of "back to the future."  or maybe like he had a dyson strapped to his back. 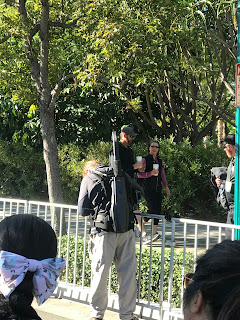 and then finally it was our turn to head up to the start line for the race. 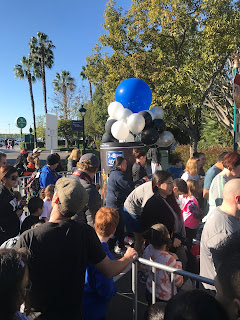 we warned the kids to start out slow and pace themselves so they wouldn't poop out halfway through the course.  i was grateful that the bean heeded the advice, because she's more of a sprinter and always leaves me choking on her dust. 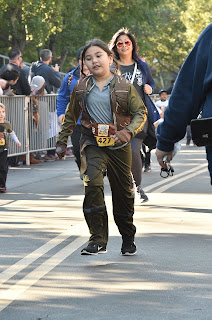 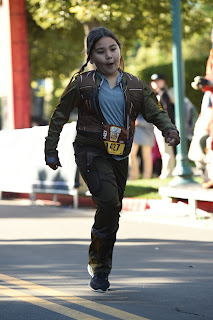 i'm not gonna lie, guys.  remember how i said i was totally untrained for this half?  yeah...i was totally winded running 400 meters at the kids' race.  yikes.  but i finally caught up to her at the 200-meter mark and we ran the rest of the course together. 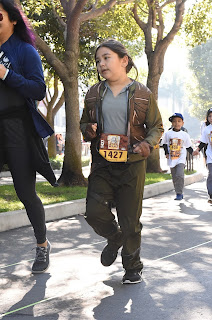 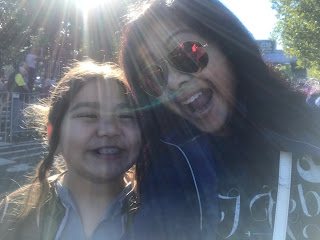 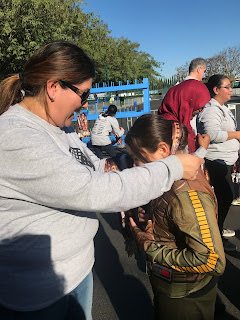 and took her finisher's photo.  i was relying on the photographer to get a great shot for me, but as i searched for these along with the other official race photos, they never showed up.  so this is the best i got: 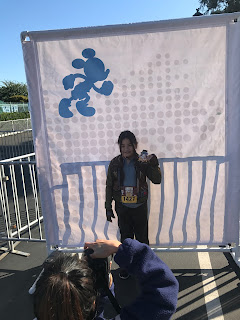 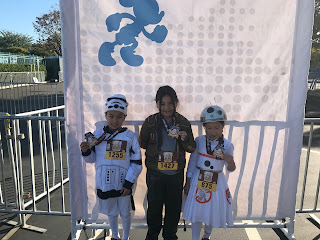 there were some pretty fun photo ops set up beyond that, and so while lilcee got in line the kids decided to do a little hula hooping. 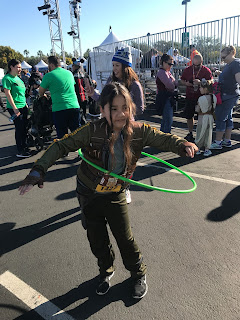 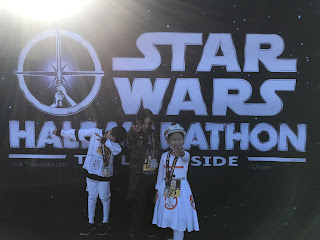 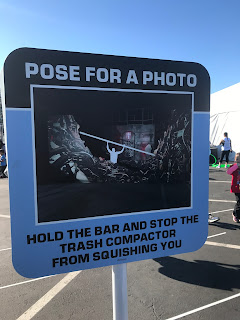 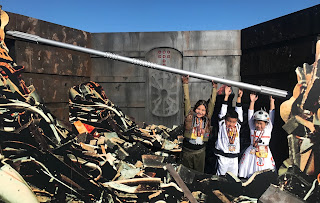 we'd seen on social media that there was a tent for annual passholders to take photos and grab an exclusive cinch backpack, so we headed over to get ours.  on our way, i noticed something that i'd never seen before - a snack bar where you could grab drinks, popcorn, or even a death star balloon.  disney, man.  always looking out for the hustle. 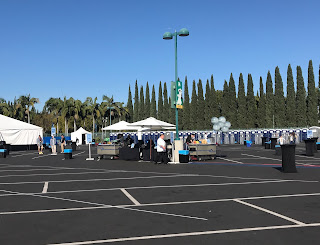 the photos we got inside the AP tent haven't shown up yet, either.  boo. 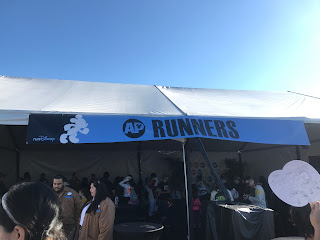 before we left, the bean asked to get a picture in front of the giant jyn erso backdrop.  she was a little irritated that so many people had mistaken her for other star wars characters...but then brushed it off with "i guess they haven't seen the movie yet."  heh. 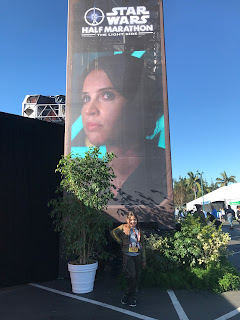 and one last shot with her BFF: 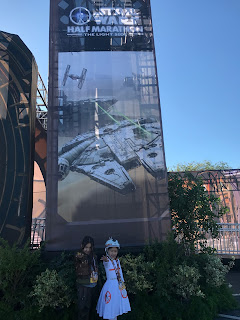 she had a birthday party to attend back home, so we raced up the freeway to get there on time.  i'd stupidly thought we'd have time to go home and change, but you know what happens when you assume.  luckily, i'd had her put on a pair of leggings under her costume and i'd worn a star wars tee layered over a long sleeve.  so she stripped off the costume, i gave her my t-shirt (which fit her perfectly aside from being a little long, holy crap), and then she was good to go. 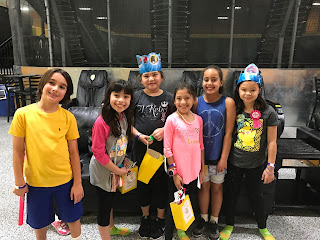 that's right - she ran the 400m (without stopping, did i mention that?) and then headed straight over to a party where she got to jump around on the trampolines for an hour.  it was a good exercise day.

much later, we headed back down to anaheim with the old lady to check in at the hyatt house hotel.  lilcee had found this hotel months ago and booked a room. but when we realized that it might be a little cramped with just one bathroom for eight people, we thought it might be a better idea to get a second room.  it was really nice, and only a few months old.  look - it had a little living room area, dining room and even a full kitchen: 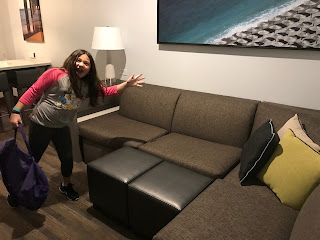 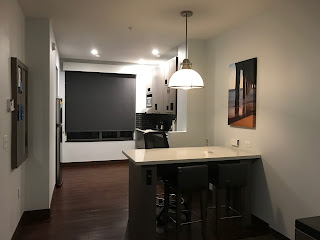 there was a whole list of things you could borrow if you'd forgotten something important: 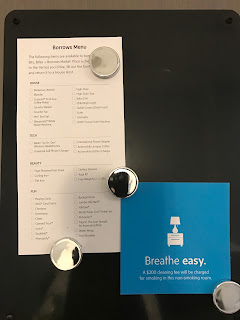 and both the bedroom and bathroom were really spacious and comfortable. 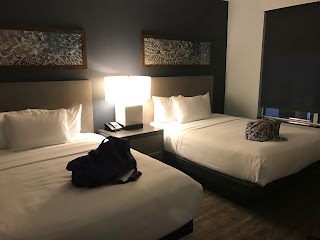 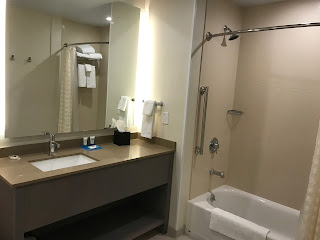 after enjoying a delicious korean bbq dinner with the gang, we all headed back and got ourselves ready for the next day.  i'd originally planned on dressing as jyn erso, like the bean had, but after we mourned the loss of carrie fisher i felt compelled to honor her in a small way.  and so here's my flat runner, complete with my mini hoth leia to wear on my shoulder: 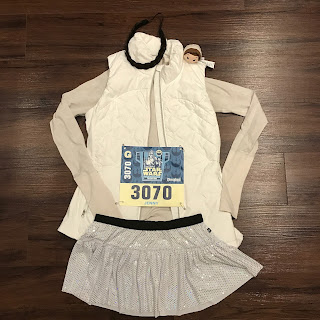 Email ThisBlogThis!Share to TwitterShare to FacebookShare to Pinterest
Labels: friends make everything better, run disney, the bean runs too