half day at school = disneyland

since parent-teacher conferences started last week, the bean's school operated on a half-day schedule on thursday.  and with a birthday party to attend this weekend, we decided to head out and do a little shopping for a gift.  she already knew what she wanted to buy, and the sanrio store at ontario mills was the place to go. 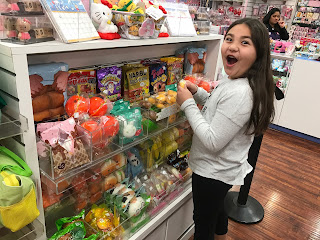 after we grabbed lunch and relaxed at home for a bit, it was time for her weekly piano lesson.  it just so happens to fit right into the schedule for her sister to pick her up on her way home from work, and then as soon as they got home i grabbed a few things and got in the car.  no school on friday gave us a great opportunity to head to our favorite place for a few hours: 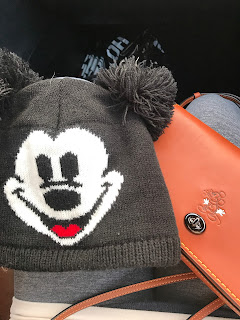 the main street electrical parade just returned to disneyland a week or so ago, and we wanted to see it.  i thought that maybe a thursday evening might be a good time to go - random weeknight, chilly weather, work and school night for most.  and of course i was proven totally wrong as we arrived and found ourselves waiting in some pretty long lines just to get into the parking structure.  guess everyone else had the same idea.  oh well.

as we made our way up main street and through fantasyland the sidewalks were fully lined with people who'd staked out a great spot to watch the parade.  i'd checked the app earlier in the day and found that wait times were really short for pretty much everything, but as the afternoon turned into evening and people got home from work and school they all streamed into the park. we headed over towards small world, where the parade begins, and found a spot on some stairs leading up to a platform where the overflow line is usually set up.  it wasn't the best spot and there were tons of people in front of us, but at least we were elevated a little and would get a somewhat decent view of the parade.

i remember watching this when i was about the bean's age.  it's bounced back and forth between disneyland and disney world in florida quite a bit since then, even making a brief appearance across the esplanade at california adventure for awhile.  since it left disneyland in 1996, the old lady's memories of it are only from the handful of times we've seen it at disney world, and the bean had never seen it at all.  when the familiar music started up, the nostalgia hit hard and i felt like i was a little kid again. 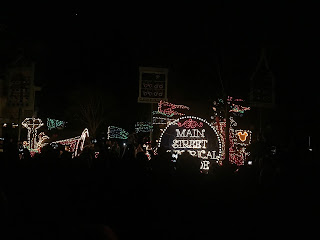 the parade hasn't changed a ton from what i remember.  they use a lot of classic characters like alice in wonderland, peter pan and tinkerbell. 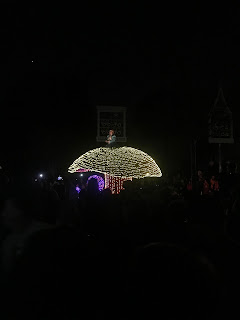 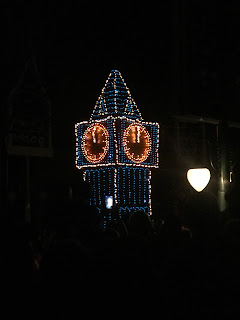 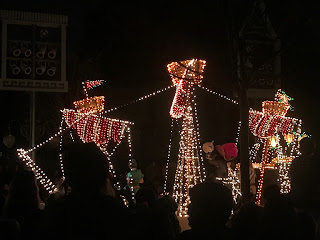 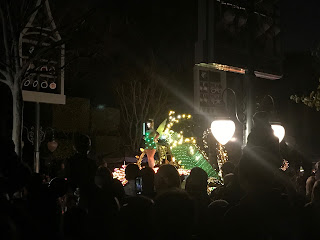 elliot from "pete's dragon" was always my favorite float.  vintage, so adorable. 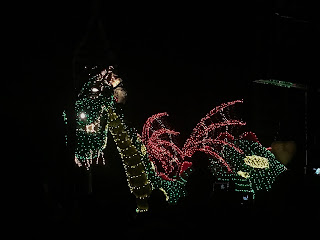 the patriotic float was always the closer. 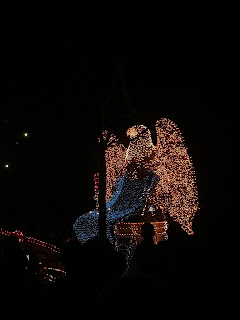 the bean and i decided to share a turkey leg, while the old lady opted for a corn dog on main street.  i threw in a cream cheese-filled pretzel, which was surprisingly good, and that was dinner.  heh.  and despite the chilly temperatures, the girls talked me into getting them a couple of scoops at the gibson girl ice cream parlor. 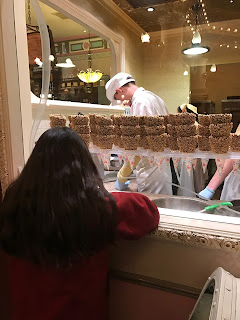 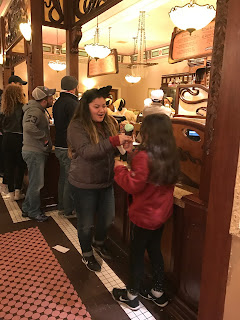 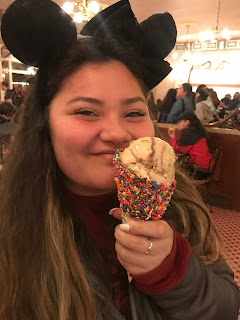 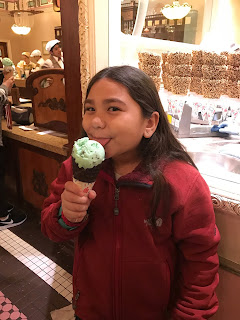 being a thursday, the park closed at 9:00 that night.  it was kind of fun to hear the closing announcement over the loudspeaker as we headed towards the exit, since we don't often stay till they kick us outta there.

the main street electrical parade is at disneyland through june, so maybe we'll go back and stake out a good spot so we can have a better view of it one of these days.  that'll require a lot of patience and sitting on the ground for a couple of hours, but i'm thinking that snacks will make the time go by fast.

snacks always make everything better, don't they?
at January 30, 2017

Email ThisBlogThis!Share to TwitterShare to FacebookShare to Pinterest
Labels: disneyland, parades are fun