do you give up, or are ya thirsty for more?

back at the hotel, it was kind of a mad rush to get ready.  the girls were hanging out with the gang in the other room, and as i got out of the shower i heard them when they came back.  i got myself dressed and found the bean and mini cee watching youtube videos on her iPad and the old lady hanging out in the kitchen with a plate of food they'd brought back for me from the hotel breakfast downstairs.  as i munched on it, i took a peek at my stats from the morning: 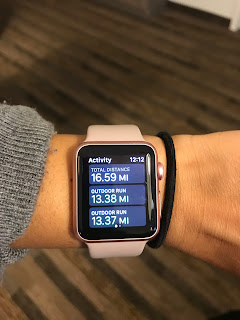 as we were packing up i pulled out my run disney snack box, and we decided to open it up and see what kinds of goodies there were in there.  no gross processed cheese in this year's box: 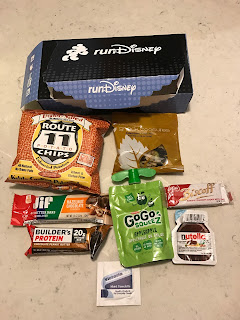 oh, and here's that annual passholder exclusive backpack we got from the AP tent: 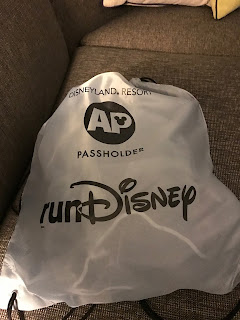 after meeting up with the group at the elevator and then parting ways in the parking garage, we headed off to the parks.  yeah, i was a little tired and we knew it would be crowded due to the runners and the fact that it was a holiday weekend.  but we were already down there, our passes weren't blocked off, and we figured we could just go and have some lunch, walk around a little, maybe catch a show or even a ride, and then head home.  since the bean didn't have school the next day we weren't working with any time restrictions.  and besides, i wanted to take a bunch of pictures in all the fun spots with my medal.  it's all about the photos, guys.  this is not news.  ha!

my first chance came as soon as we got through the turnstiles. 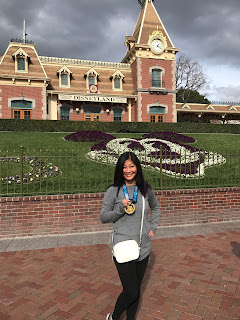 after grabbing some delicious pizza, pasta and salad at the pizza port in tomorrowland, we decided to go into the star wars launch bay to look at the movie memorabilia and see which characters were there for photo ops.  chewbacca and darth vader were both there, but the line for darth was really long and i'd already posed with chewie earlier that day.  so i settled for this: 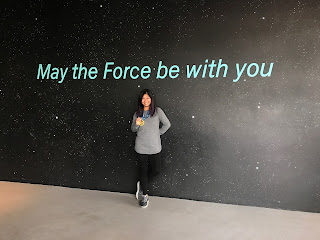 with all of the ride lines super long and tons of people to wade through, we headed over towards the fantasyland theater to catch a showing of "mickey and the magical map."  a little sugar was in order, and when the bean pointed to the kiosk selling grape-flavored cotton candy, we were sold. 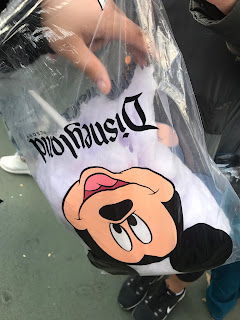 the bean was delighted to find that the cotton candy made her tongue purple. 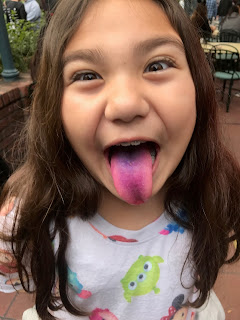 as always, it was a great show and we'd managed to score some pretty good seats.  the bean had a blast decorating her sister's head with the streamers that shot out at the end of the performance. 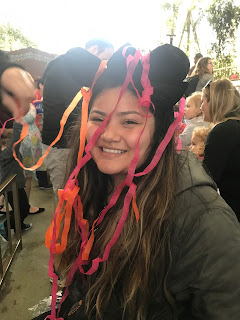 did i happen to mention that in the days leading up to this weekend, i was dealing with a bunch of different issues - i was catching a head cold, i'd bruised the inside of my cheek from biting it not once, but twice in the very same spot, it was that time of the month (sorry, TMI), i somehow ended up with a case of pink eye in my right eye (who gets pink eye at my age?!?) and on top of that, i lost my voice.  i was a hot ass mess, man.  but the latter was pretty entertaining for me as i attempted to serenade the girls with the songs from the show as we walked out of the theater.  they were appropriately mortified, and the amount of amusement i got from that kept my mind off of my still-sore calves.

i took one last bling shot in front of the castle.  super cheese, amirite? 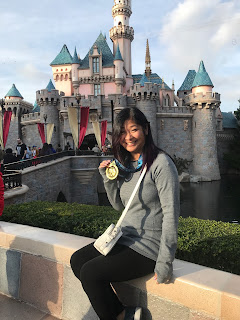 the bean asked to take a picture with me, and i wasn't gonna say no. 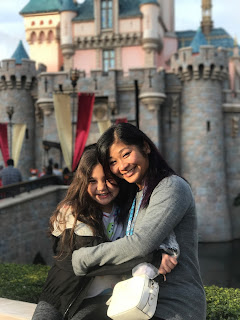 but i didn't want the old lady to be left out, so we took a quick selfie before hopping off of that bench so someone else could get their shot. 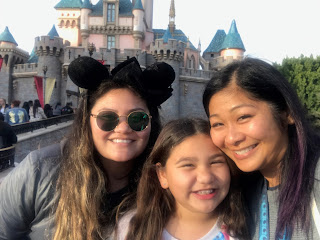 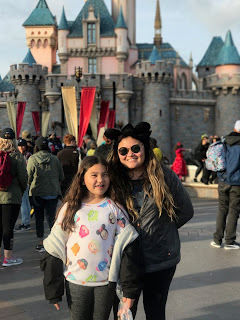 one last snack before we headed outta there, because beignets shaped like mickey are a must-eat. 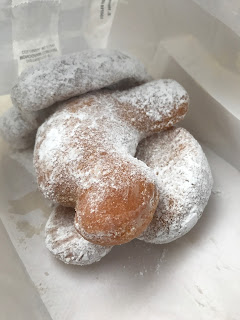 the final tally after my disney-filled day: 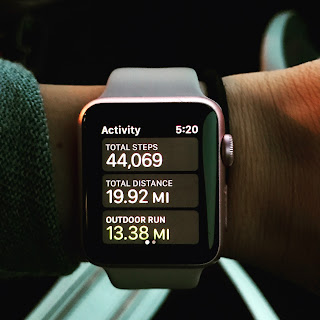 i'm pretty sure that was a record-setting day, at least since i started wearing the apple watch.  that's enough steps for, like, four days!  you better believe i slept like a freaking log that night.
at January 19, 2017