it's kind of crazy that the bean has already been back to school for a whole month.  i mean, it feels like we were just in the throes of summer madness, and now we're already fully in the swing of things in the fourth grade.  nuts.

and now the first big project of the year is already behind us.  part of their science lesson these days is all about california and the different land forms you can find within the state.  the teachers came up with this super fun way to learn more about all of that in what i think is probably the most genius way ever...with cookies.  talk about something that's right up my alley, amirite?

last week, the kids brought home a template and instructions for exactly what they were to do to prepare for their california cookie project.  the shape of our state was printed on a legal size piece of paper that they could cut out and use as a template for the cookie.  and then after the basic shape was cut out, they were to press down to make an indentation in the middle of it to represent the central valley.  the instructions also said to use extra dough to form the mountain ranges, but the bean assured me that they didn't have to do that because they'd be using chocolate chips and hershey's kisses instead.  sounded like a good idea to me. 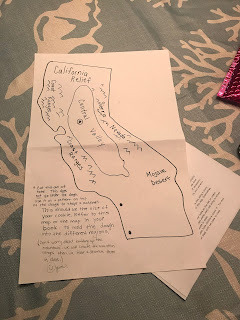 and because homework is always better when you do it with friends, i invited two of her BFFs and their moms to come over after math tutoring on the day before they were to bring the cookies into class.  the instructions suggested buying premade refrigerated sugar cookie dough, but we all know i can whip up a batch of sugar cookie dough in no time.  and i already had all of the ingredients at home.  the kids are supposed to do the majority of the work with minimal assistance from their parents, but i figured it was okay for me to go ahead and make the dough and roll it out for them so that they could focus on cutting and pressing. 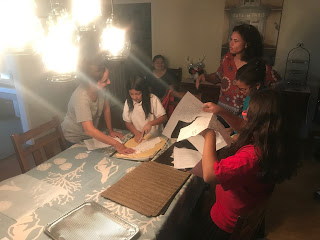 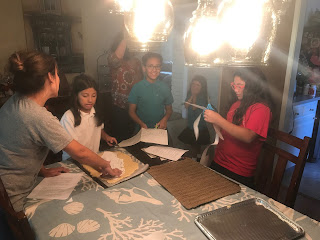 after each girl had cut their template out, i handed out paring knives that i'd picked up at the dollar store and showed them how to hold the template down while cutting the dough out.  the bean has seen me do this a bazillion times when i need to make a specific cookie shape that i don't have a cutter for, so she knew how to get this done. 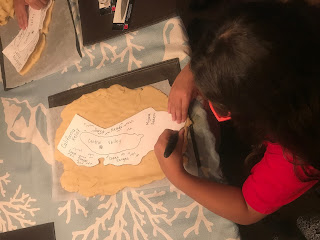 it was a pretty easy task, and when they were satisfied with how their cookies looked into the oven they went.  because the dough was thicker than my usual cookies, we baked them for a few minutes longer.  when they came out they were still a little soft in the middle, but golden brown along some of the edges.  and since the teacher had said that having them a little underbaked was a good thing (so they wouldn't be hard and brittle and easily breakable), it worked out perfectly.

parents were welcome to come to class while they did their cookie decorating.  and so i headed over to school to watch, take pictures and help out wherever needed.  when i got there, their desks had been pushed together to form two long tables, covered in plastic and all of the decorating goodies laid out for them to use. 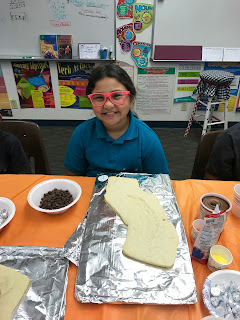 it was frosting, sprinkles and chocolate galore.  some of the kids even used some swedish fish along the coast, which was super cute.  the bean opted out of the swedish fish and stuck with the basics instead. 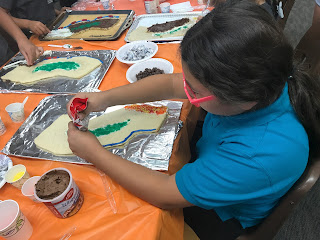 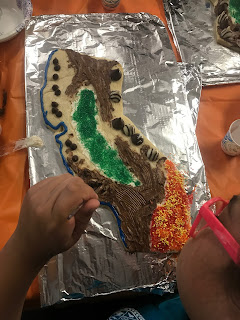 because she's such a perfectionist, she was one of the last to finish her project.  and also maybe because more than one piece of chocolate found its way into her mouth rather than on her cookie.  heh.  here's her completed creation: 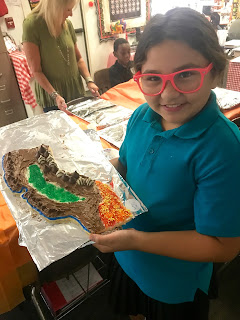 the kids were all super proud of their artwork and excited to take the cookies home to show their families and dig in.  the bean's, of course, is sitting on the table untouched and uneaten because of course, since they're always around nobody in this house ever wants to eat my sugar cookies anymore.  but every time i sit down i catch a whiff of that chocolate frosting, and it smells pretty darn good.

and then today was the first of many spirit days at school.  today's theme was "mismatched," and you know we're always all in for dress-up days.  we put together the most ridiculous outfit we could find in her closet that still somewhat adhered to dress code, threw together a crazy hairstyle and voila: 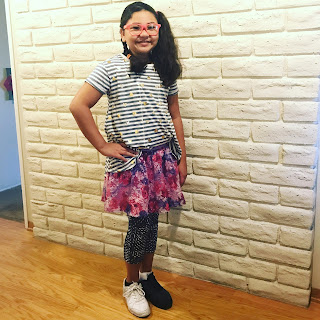 fourth grade is definitely off to a fun start.
at September 14, 2017