ladies and gentlemen, elvis has left the building

it's been weeks of listening to the bean pluck out "love me tender" on her ukulele in the back seat, in the living room, in the bathroom, in the - well, you get it.  all that plucking earned her a spot in this year's school talent show, and she was equal parts stoked and terrified despite having already performed some sort of act the last two years.

we'd originally planned to have her in one of her hula skirts and a flower in her hair, but as i was driving home after dropping her off at school one morning i had the best idea ever:  find her an elvis costume to wear instead.  come on, that's genius, right?  and so when she got home i asked her if she would be game for it and sure enough, she said yes.  a couple of clicks on amazon and we were set, and you saw the sneak preview in a post last week.

she had a full dress rehearsal the day before the show, and because she had cheer right afterwards i had her just wear her practice gear under the costume.  but still...this is awesome, is it not? 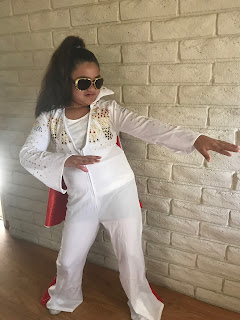 her confidence faltered a little as we got to school and a few kids came up to her to comment on her costume - nothing bad, and they all knew exactly who she was dressed up as.  i think she was just feeling a little self-conscious, but i just kept encouraging her and we made our way into the gym for the rehearsal. 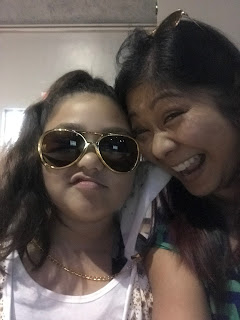 i sat off to one side when her turn came up and figured i might as well take some pictures and video. 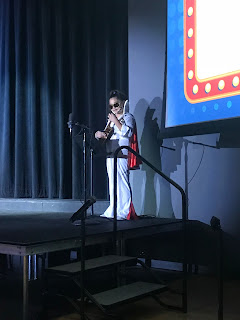 if you want to hear (almost) the whole song, it's here.  and as it turns out, this was a much better view than what we ended up with for the actual show.  it's just over a minute long, which was just the right amount of time.


as expected, the gym was pretty full when showtime came around.  there were tons of friends and family present for all of the performers, and my mom came out to watch with us.  i took this before the hub arrived: 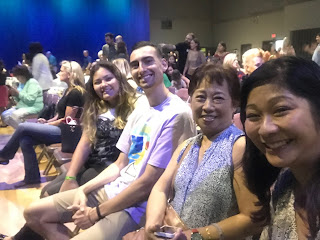 we didn't know at which point in the show she was scheduled to perform, and then about halfway through we finally saw her take the stage.  "she likes to draw, and she's been a cheerleader for five years.  here she is with an homage to elvis!" 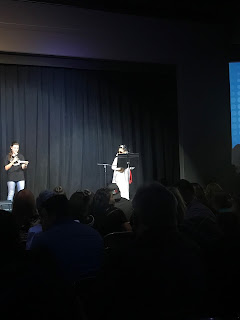 the music stand almost completely covered her up, so i was extra grateful that i'd captured it on video during the dress rehearsal.  but you still should watch this (much shorter) video clip and be sure to pay attention at the end, because her exit stage left is - well, it's epic.  and it was her own idea, which made it even better:


the video cuts off just before the emcee hops back onstage and announces "ladies and gentlemen, elvis has left the building."  that was FIL's idea, as he lamented the fact that they'd miss being at the talent show to see it live.  i was glad that the drama director was totally on board with it and added it to the script without hesitation when i emailed her with the idea.

i think this might be my most favorite of her three talent show performances thus far - even more than last year's puppet show or when she did the hula.  and although it hasn't even been a day since this one ended, we're already thinking ahead to what might come next year.

Email ThisBlogThis!Share to TwitterShare to FacebookShare to Pinterest
Labels: bean's got talent