as soon as we got home from our beverly hills powerpuff girls extravaganza, we grabbed a gift bag and ran back out the door to head to a birthday party scavenger hunt at the mall.  l.a. traffic had thrown us a little off schedule, and i'd already texted the birthday girl's mom to let her know we were running about half an hour late.

have i ever mentioned how much i despise being late for stuff?  i would so much rather be a few minutes early and wait a bit than to roll in late.  it's also probably because i'm guilty of succumbing to FOMO in a big way and hate the idea of missing anything fun.  heh.

when we arrived, the girls had already been split up into two teams and were working on their first challenge inside barnes & noble.  the bean found her team and jumped right in, and while i never did figure out what they were supposed to accomplish they definitely looked like they had fun doing it. 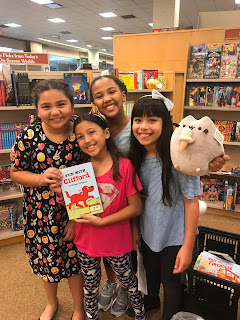 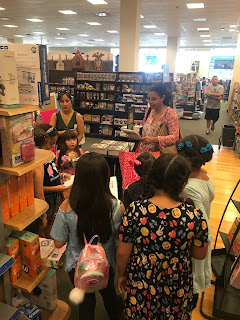 this was her team name, by the way.  how appropriate. 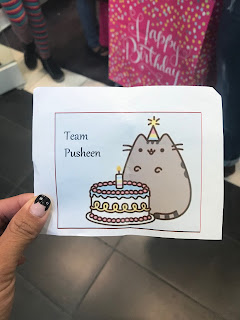 the next stop was claire's, where they were tasked with finding something that fit the parameters of:

i help you stay organized.
i am not with you at all times.
i am soft.
i have a handle.
i am soft.
i am partly pink.
i am quiet as a "mouse."

the bean tried to convince her team that this is what they wanted to pick out: 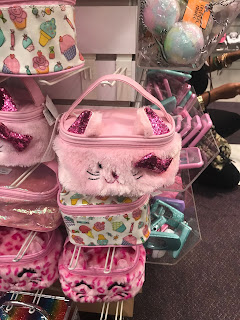 but they all had other ideas, and vetoed her choice.  i could tell she wasn't pleased with being brushed off, but as i watched her team work and interact with each other i realized that every single girl she was teamed up with has leadership tendencies.  and you know what happens when there are too many cooks in one kitchen...

let's just say, it was challenging and frustrating and maddening for each of them at some point in time during the scavenger hunt.  and with one of the rules being that they had to all agree on the item they were choosing for the three shopping challenges, it was a little tough to referee them.  luckily, another rule said that they were expected to work it all out together without trying to corral a parent to help, and so we just stood back and watched them try and get it together.

after that challenge was complete (during which they found out that the item they were supposed to buy was exactly what the bean had chosen, only in a different color), they moved on to a list of tasks that they were given 15 minutes to accomplish.  there were more than 15 items on the list and they weren't expected to get them all done, and it was a photo scavenger hunt.  you know, stuff like "find a mannequin wearing a hat and take a group photo next to it." 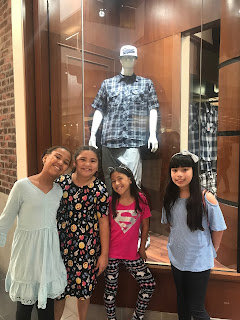 here, too, they ran into a little difficulty.  they had the entire lower level of the mall to work with, and it was a little hard to read and retain all of the items on the list.  i think that maybe they just got a little overwhelmed at how many different scenarios they had to choose from and it got a little crazy.  and so the other mom and i stepped in to give them a little bit of direction.  this seemed to help, and they were checking items off the list in no time.

find a sports shoe store and take a picture of the largest size they sell?  check. 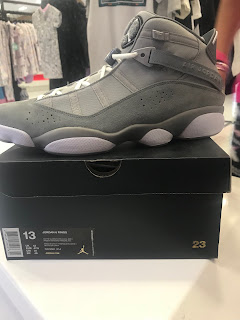 take a picture of a red shoe?  okay. 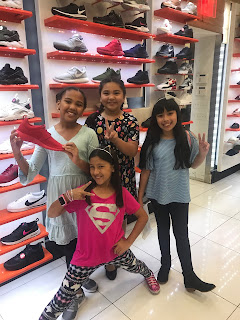 how about a picture of something that would be impossible for the team to carry?  sure! 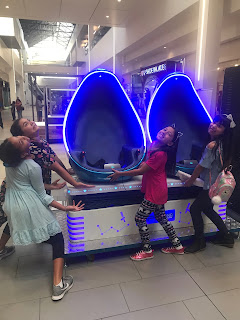 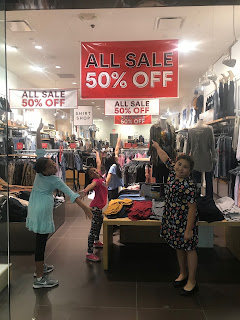 grab a copy of the mall map, or take a picture next to one.  boom. 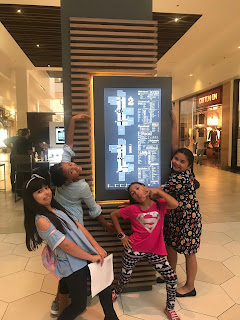 at the end of the allotted time period, the two teams met up again in front of the japanese lifestyle shop, where they received instructions for their third and final shopping challenge. 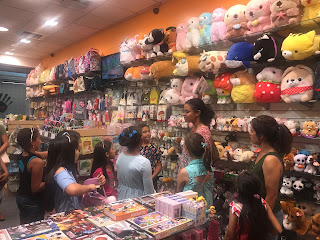 the original plan was to head across the parking lot and have a big group dinner at olive garden (the bean was stoked for this part), but when we arrived and checked in at the front desk we were told that the wait for a table to hold a group of our size would be over two hours.  NOPE NOPE NOPE.  and so although we still had to wait awhile, we ended up here: 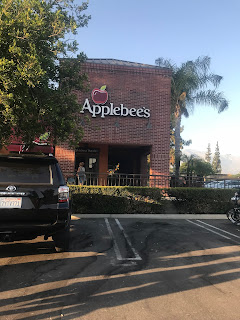 we passed the time with the tallying of points, handing out prizes to the winning team (not the bean's), playing a trivia game about the birthday girl, and just spending some good quality time together.  i really like this group of parents, so everyone had a great time.

the scavenger hunt idea was really fun, and a super unique way to do a birthday party with a small group of friends.  that group happened to be the same size as our girl scout troop, so i'm definitely considering creating one of our own and heading out to the mall to give it a go.  stay tuned.
at October 19, 2017