showing off those cheer skillz

just a week after the vegas cheer competition extravaganza, the bean and her team assembled at nearby sierra vista high school in baldwin park for another competition.  after their triumphant win at jamz nationals, the girls had continued with practice as usual during the following week to make sure their routine stayed sharp and clean.  and saturday morning found us up bright and early and ready for a nice, early call time, performance and awards. 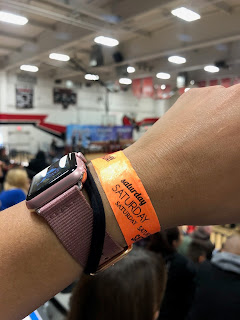 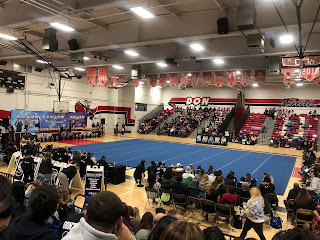 we'd managed to get into the morning session, which was a nice change even though it was a little tough to get up and out there.  but it was totally worth it when the girls got up and headed out to do their stretches and warm-ups somewhere around 9am. 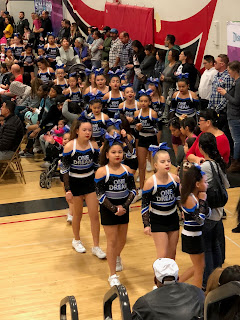 somehow, despite a 20-minute delay at the start, they managed to keep things rolling and the girls hit the mat pretty close to the time they were scheduled to perform. 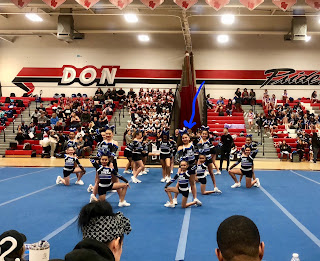 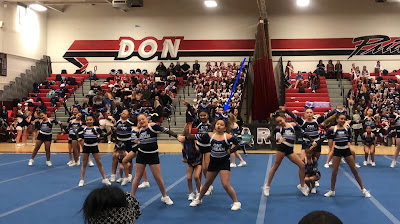 they killed it as always, and luckily we didn't have to sit around and wait for too long before the rest of the teams got their time on the mats.  then while the judges deliberated and filled out the forms for each team, girls competed against each other on an individual basis for things like jumps and tumbling and fun stuff like that.  they ended up starting the awards right on time, and we were excited to hear our girls' teams called out as first place winners in their divisions.  and then it got a little confusing as they announced the grand champions for the session and it sounded like our team had taken it, but there was a flurry of activity and chaos and so we never really did figure out exactly what we'd won.  but as we headed down to the gym floor and reunited with the bean, we followed one of our coaches who was toting this gigantic trophy that was taller than a good number of the girls. 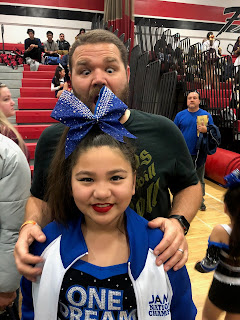 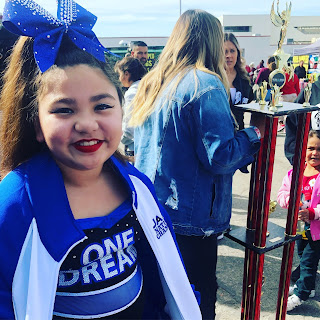 after taking a group photo, the girls were released and i trudged along behind the hub and the bean as he teased her about something - probably her makeup or her big ol' cheer bow or something like that. 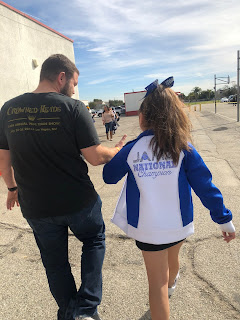 oh!  and now that the team has just one minor competition left to perform in, we've finally been given the green light from the coaches to post video of the girls' routine.  it's about 2.5 minutes long, and if you look at the picture i posted up there with the arrow pointing to the bean, you can kind of follow along and see where she is throughout the routine.  she starts out in front, moves back for awhile, is the base (on your right side) for the stunt group in the middle, acts as a backspot for a bit and eventually moves up to the front again during the dance sequence.  this is from the competition in vegas:


i seriously still tear up with pride when i watch that.  when i consider where she was when she started practicing with this team and then watch her perform - well, she's really just improved so much under the guidance of her coaches.  it's also nice to see her flourish and learn how to work her ass off with coaches who are tough on her and are out of the safe little bubble she's usually in at school.  she used to be such a sensitive sally who couldn't take criticism or handle what she calls "yelling."  and to my surprise, she's decided that she does want to return to this team again for next season.

looks like we'll be heading to vegas again for more cheer next year!  whee!
at February 05, 2018