the old lady and i have found a new fitness obsession!

a lot of my friends have been raving about orangetheory fitness for a long time.  there are OTF studios all over the country, but for a long time the closest ones to us were either in rancho cucamonga or pasadena.  i don't love working out enough to drive my happy ass all the way out to either of those locations on the regular and i was plenty happy with my barre classes anyway, so there you go.

and then last summer the news came that an OTF studio was going to open in glendora, in a newly revamped shopping center that was under construction.  word was that they were hoping to open in october, and so i was super excited and added myself to the wait list for updated information

october came and went, and then it was supposed to open in december.  well, december came and went and while they were still posting teasers on social media no one was getting any updates on when it might actually open.  the old lady and i happened to be in the area one day in early february, so we strolled by and saw some progress: 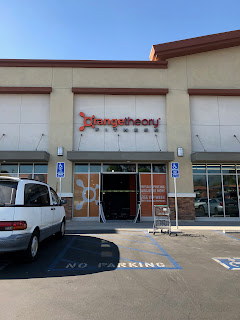 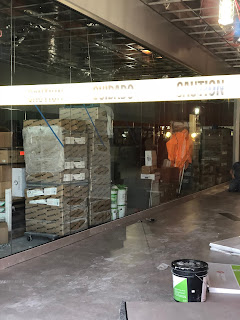 it still looked a long way away from actually opening though, so we were pretty surprised when we got an email just after valentine's day that said "we're finally opening soon!  VIP week is coming february 22nd!"  that's the "free" week for those who signed up for memberships pre-opening, securing the lowest rates and giving those of us who are newbies a chance to try the workout for a week before we're committed to the membership.

mind you, neither the old lady nor i really knew what to expect from this workout.  but i really don't know a single person who has done it and doesn't love it.  even my friends who don't love to work out at all rave about it.  good enough for me.  we went in on the first day the studio was open for tours to pick up our heart rate monitors and check it out: 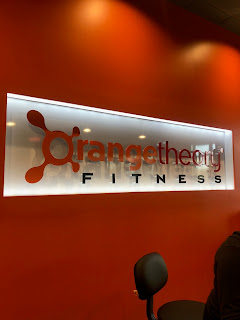 and then the next morning, we went in for our first class.  this one happened to be one of their "endurance" sessions, and i'm not gonna lie - i was miserable.  that shit was HARD.  and for some reason, one of the instructor's assistants kept coming over to me to pick on my form on the rowing machine.  and i'm not making it up - even the old lady was like "damn, he's not leaving you alone!"  i'm pretty sure he came over to make a comment like four separate times.  it was kind of annoying.

we came out of there drenched in sweat but happy to have gotten our first session done (she's going to kill me for posting this again, since i posted it on instagram that morning): 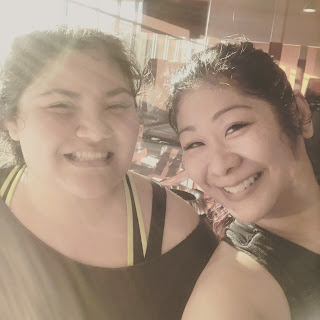 and because i was still participating in a 30-classes-in-45-days challenge at xtend, i went straight from there to a barre class. 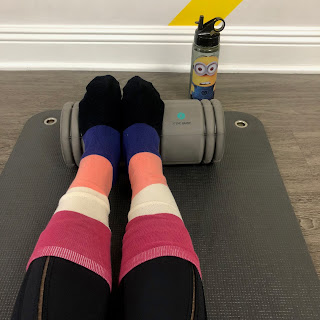 luckily, it was one of their roll & release classes which actually helped get me all stretched out and loosened up after the intense workout at OTF that morning.

we went back for our second class on monday, and found that we had the same instructor but no extra assistants during class.  still, i was pretty apprehensive since he'd killed us during the last class. 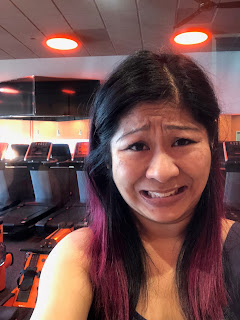 but this time, the class was a mixture of endurance, speed and power - so while it was no piece o'cake, it was just the right amount of challenging for us.  this time, we left pretty encouraged and excited to continue on with our OTF journey. 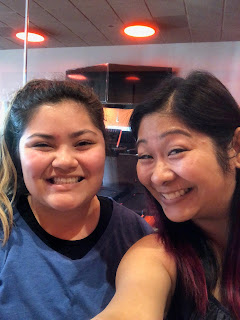 this morning, the heart rate monitor software in the studio was finally set up and we were able to glance up at the screens periodically to see how we were doing.  there are color codes to tell you how much effort you're putting in, with blue and green being kind of a warm-up zone and orange and red for the higher levels.  and as soon as the workout was over, i had this in my email to tell me how i'd done: 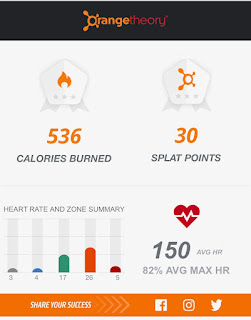 when i asked on twitter WTF those "splat points" were for, one of my friends said it was how many minutes i'd spent in the orange and red zones.  interesting.  i'd been hoping it was some sort of rewards program and i could do some shopping, since i'd seen that there was some fun OTF-branded gear for sale on a table in the lobby.  heh.  no such luck.

in any case, the old lady and i are pretty excited to continue with our classes and build up our strength and endurance.  when we're on the treadmills i'm still "power walker" mode because i haven't done any running in months.  we're both signed up for a membership plan that gets us 8 classes per month, which will work out perfectly with my barre schedule.