the girls and i had every intention of heading down to the 'land yesterday afternoon, but when the old lady got home and we were just kind of hanging out, the thought of driving down to anaheim (likely in traffic, and most definitely to a park full of families finally out of school for the summer) just didn't appeal anymore.  not to mention, the bean was happily snoozing away on the couch and looking really comfy.

when she woke up, we tried to come up with something else fun to do - her cheer team was having a fundraiser at a local mexican restaurant.  but it didn't sound good to any of us, and that idea was vetoed pretty quickly.  we revisited the idea of going to disneyland even just to grab some fun treats and maybe watch fireworks, but the laziness won out.  and then as i was perusing the showtimes for the local movie theater, i found it:  an incredibles doubleheader on the IMAX screen.  there were still a handful of seats available, so i bought our tickets using the app and that was that.  even better, the IMAX shows always have assigned seats.  i hate having to find seats when we're walking in at the last minute.

we had just enough time to feed the dog, grab some mcdonald's grub so we wouldn't be hungry, and walked in just as the first movie started.  apparently when it's a special event like that, they don't prolong it with a bunch of previews, and i was glad that we had all seen the first incredibles movie plenty of times so we hadn't missed a thing.

it was fun to see the movie up on the big screen again, and i hadn't realized that the first one was 14 years ago.  that's a long time to wait for a sequel.  when it came to an end, the girls headed out to grab something to drink and a small popcorn for us to share while i stayed in my seat and waited for the next movie to start.  the intermission wasn't very long, and i was a little alarmed when the theater went dark again and the girls weren't back yet. 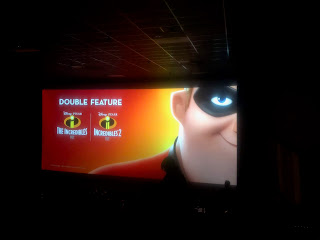 the writer and director of the movie appeared onscreen to introduce the movie, along with some commentary by the cast. 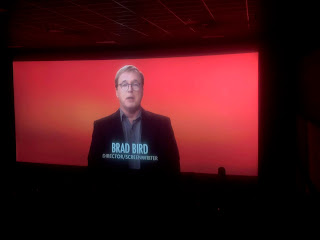 i'd forgotten about the adorable-looking short that we'd see before the movie started, and the girls still weren't back.  yikes. 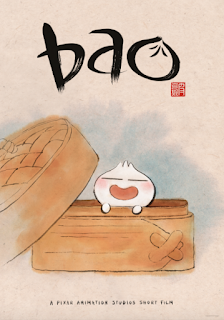 they finally returned to their seats a couple of minutes into the short, and i was finally able to relax and enjoy.  i won't spoil it for you, but i will tell you that i definitely cried at the end.  heh. 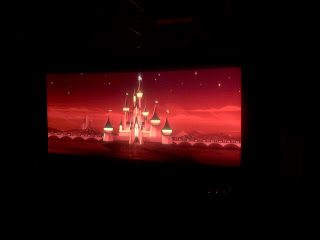 i really liked this one.  they picked up right where the first one left off, and even though it was a little longer than a lot of animated movies (almost 2 full hours!), i was completely entertained through the whole thing.  the bean said she really liked it too, although the old lady wasn't sure if she liked it or not.  but since she'll get another chance to make a final decision about it when she takes her special friend to see it.

Email ThisBlogThis!Share to TwitterShare to FacebookShare to Pinterest
Labels: going to the movies