are you tired of my disneyland posts yet?  because guess what...it's time to renew our passes and you KNOW we aren't letting that shit expire.  heheheheheh.

one of the bean's favorite team bonding outings with her cheer squad is the scavenger hunt at downtown disney.  last year it was a little awkward in the beginning since she only knew a couple of the girls on the team, but this year i lost her to her cheer BFFs as soon as we arrived at the meeting spot.  she gave me the eyes when coach asked a parent to walk with each group of girls, and so instead of participating in the parents' version of the hunt i had to chase them around with the help of one other mom.

a list of things to find and places to go was sent via text message to all of the parents, and off we went.  the first one told us to find a yellow wall and take a group photo, which we found at the lego store. 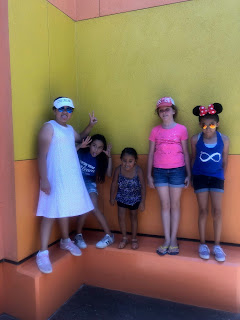 there were about 8 or so tasks to complete, and we scurried around the downtown disney area from one end to the other a few different times to get to them all.  the girls were successfully thrown off by another team during the last challenge, making us the last group to get to the end despite having been in the lead for a good majority of the time.  oh well. 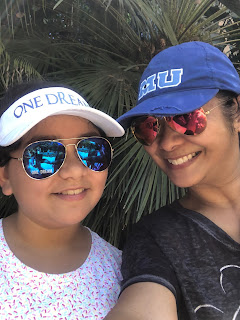 we got together for one big group photo before everyone went their separate ways. 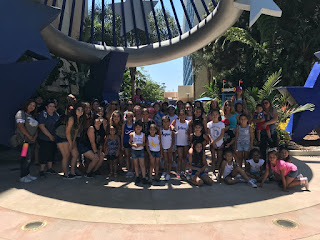 you know we weren't going to be all the way down there without going into the parks if even for just a little while.  not to mention, we were hungry after all that running around.  being a saturday afternoon, it was pretty busy at disneyland, and we ended up at the hungry bear restaurant after using the app to place our food order as we made our way through the crowds.  i decided to try their new cold brew coffee to wash down my (very dry and rather tasteless) burger: 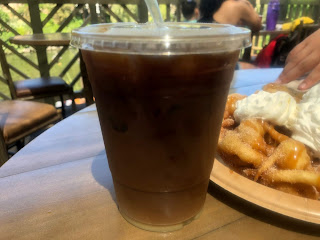 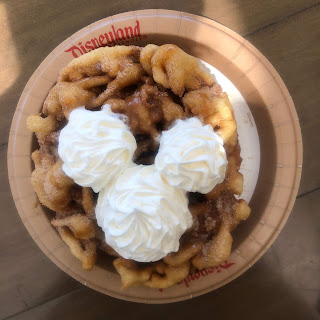 since we were back there in critter country, which is an area we don't typically visit, we decided to visit winnie the pooh and friends (the 5-minute wait didn't hurt). 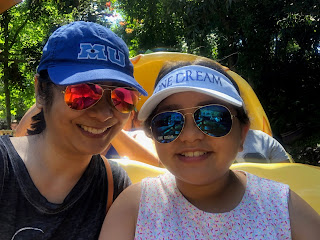 you may have heard about the updates to pirates of the caribbean - with "redd" the redhead being switched over from one of the brides up for auction to one of the pirates.  there was a lot of uproar over this, with people who don't like to see change in the parks complaining about the "sensitive snowflakes" who didn't love the auction scene to begin with.  i mean, i don't know...i've never been a huge fan of that scene either.  i used to wonder when i was little why the women had to stand there like cattle while the gross dirty pirates got to sit there and "buy" them, and i always thought it was just icky.

anyway, despite the 45-minute quoted wait time on the app when i checked while we were eating, we found that the line wasn't all that long when we got there.  and so we went for it, moving through it pretty quickly and looking forward to getting inside where the air conditioning was blaring.  as we went through the line we noticed this elevator off to one side and wondered where it went. 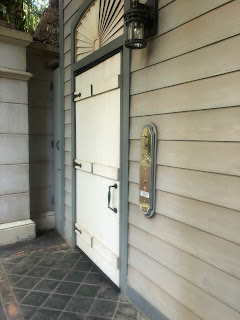 by the time we were seated on a boat, we'd only had to wait for about 25 minutes.  not too bad for opening weekend of the refurbished ride, and on a saturday afternoon to boot.  i'd heard that there were a few other changes, but this guy was the only major one i noticed as we rode through: 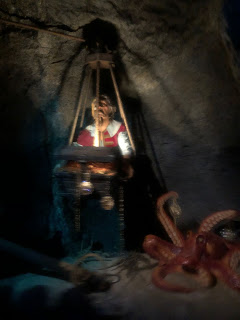 and then we rounded a corner and came upon the new auction scene, with redd right in the middle. 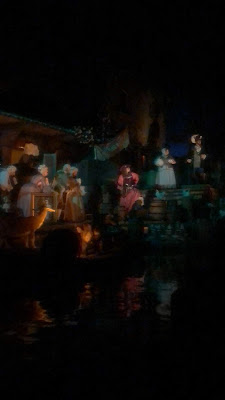 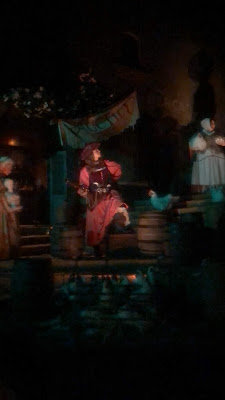 so it is a little different.  redd is right in the middle, and you actually get to hear her speak every now and then.  they still have the women lined up for an auction, only now instead of being auctioned off as brides for the pirates they're holding livestock for sale.  if you'd never been before, or hadn't listened to all of the chatter about the changes, you probably wouldn't even really notice much of a difference.  either way, it's still a fun ride and a great way to cool off for a good ten-plus minutes on a hot summer day.

and outside, we got to meet redd in the flesh.  she spoke with a delightful irish accent (which is probably fake, but she pulled it off really well). 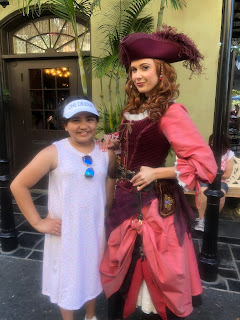 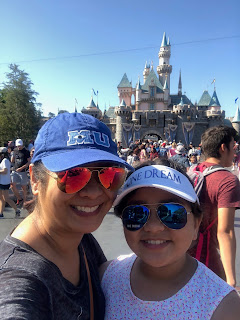 we decided to suck up even more a/c with a stop in the theater in tomorrowland, which had finally switched over from a recap of the star wars storyline to a preview of a new marvel movie coming this summer. 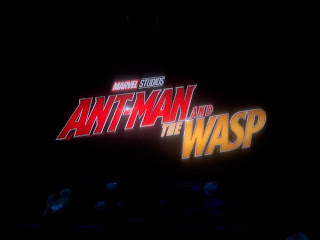 another one of our favorite things to do when the lines for the rides are super long is to hop onto the disneyland railroad.  it's a nice leisurely ride around the park, and a great place for a quick catnap. 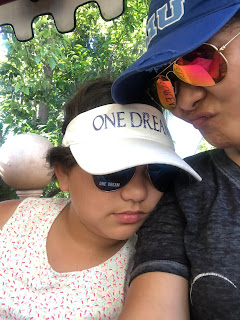 when we hopped off the train at the main street station, our intention was to walk right on out of the park and head home.  but when we realized that the pixar play parade was starting in just a few minutes and there was a prime spot open and waiting for us, we decided to stay and watch.  while i held our spot, the bean walked across the street to pick up a box of popcorn for us to snack on. 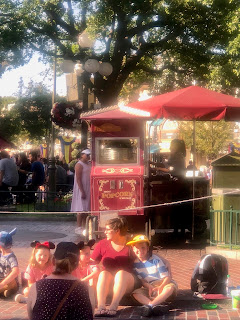 while we munched on our popcorn, the parade began.  it kicked off with dancers, a giant pixar ball and the pixar lamp. 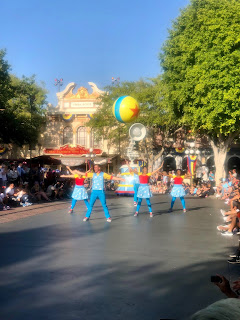 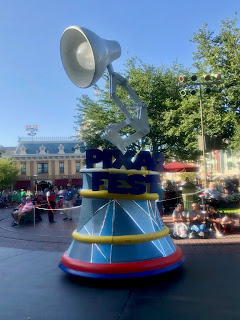 roz from "monsters inc." and "monsters university" came slinking past.  the bean used to think she looked like one of her great-great-grandmas.  ha! 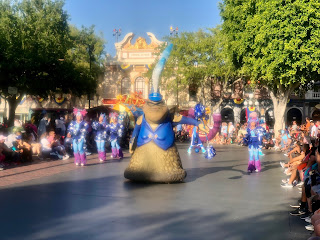 we managed to snag this great selfie with russell and kevin from "up" in the background: 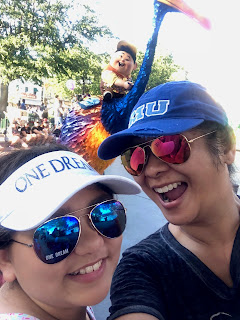 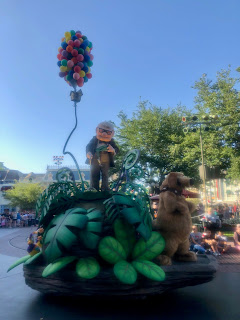 the characters from "toy story" are my favorites. 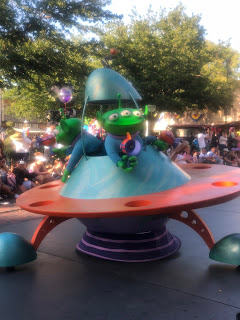 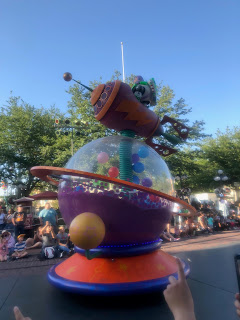 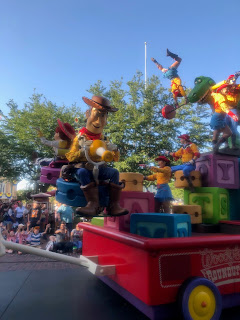 i think mr. potato head might have forgotten to look in the mirror before coming out, because his eyes were a little...off. 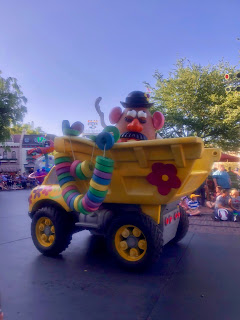 slinky dog brought up the rear. 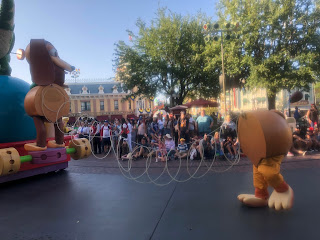 and since we were leaving at a weird time, we had no problems catching the tram back to the parking structure.  so much fun, and it just never gets old.  can't wait till we can go again!
at June 13, 2018