part of a live studio audience

if you're around the same age as me, you'll most likely remember a tv show on nickelodeon from waaaaay back in the day called "double dare."  i thought it looked like so much fun, and i would have loved to be a contestant to get to that awesome obstacle course round.  alas, i was too old for it and wouldn't have had any idea how to go about trying to audition for it anyway, and so i settled for watching it on tv whenever it came on.

it seems that all things 90s are getting a reboot and are cool again these days.  everything always seems to come back at some point, doesn't it?  and "double dare" was no exception.  i was super excited when they announced that they were going to bring it back, and while marc summers wasn't going to be the host anymore he'd still be a part of it.  the new host would be liza koshy, who is apparently youtube-famous, but because i'm an old fogey who doesn't do much youtube i'd never heard of her. 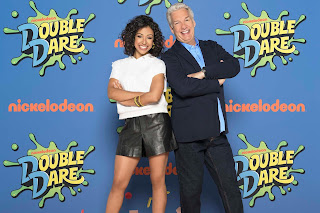 and then i was even more excited when i got an email offering tickets to watch the taping of the first round of "double dare" shows.  with the minimum age set at 8 and a taping scheduled for a monday morning, both my girls were able to come and so i went ahead and requested four seats (in case the hub was interested, which he wasn't).

traffic on a monday morning heading out to the west side is always pretty miserable, so we allowed ourselves tons of time to arrive on time.  the taping was at CBS studios in studio city, and luckily we managed to get through the traffic even with a stop at starbucks for some sustenance, pulling into the parking structure with about ten minutes to spare.  the ticket had instructed us to wear brightly colored clothing and that phones and cameras would not be allowed in the studio, so this is literally the only picture i took yesterday during our double dare extravaganza. 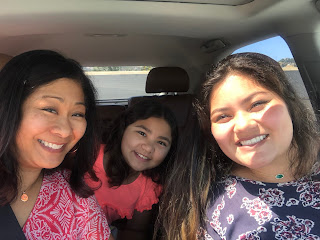 of course, as we checked in we noticed that everyone had their phones with them and weren't being instructed to leave them in the car.  ugh.  sometimes i wish i weren't such a rule follower.  although the girl who was taking our ticket did make it a point to thank us for not bringing ours in, so i guess rule followers are a little appreciated.  heh.

we stood in line for a little while waiting for everyone to get checked in, and then we were walked through the lot to the soundstage where the taping would take place.  it was such a cool set and looked just like i remembered it from the old days.  as we followed the staffers towards the seating area, we walked right past some of the pieces used in the obstacle course, like the giant pancakes and tacos and the best obstacle of all...pick it.  remember this (i borrowed this from my friend google)? 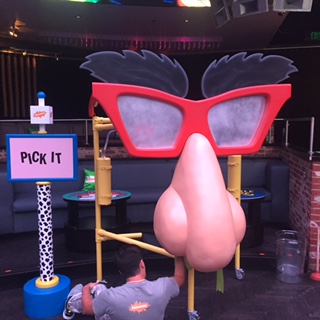 so because the old lady looks about 12 years old she was counted as a "kid" when we were checking in, which we both found immensely amusing.  and then it was even funnier when the PAs had her sit with the other kids while i was directed to sit in the very back row with the rest of the moms.  she turned around and giggled at me, and i won't lie, i was a little bummed to be out of camera range.  ha!

as the crew got the stage all set up and ready for the first physical challenge that would kick off the show, marc summers himself strolled out on stage and came over to say hello to the audience.  i'm pretty sure all of the adults were way more excited than the kids at this point.  and even funnier, he totally reminded me of my stepdad.  he was friendly and personable, and i had to wonder if he really did like being back considering that after the original "double dare" wrapped we learned that he had OCD and really struggled with the messy parts of the show.  he didn't seem bothered by anything as the taping continued, so i'm guessing all is well for the most part.

it was really fun to watch the show as the kids did their best to answer the trivia questions and play the games during the physical challenges.  the longest part of the taping was having to wait as the stage was cleaned up after each of those, because of course everything was gooey and whipped cream-y and super messy.  that was the part that took the longest, but the announcer who was there to entertain everyone and give us all instructions on when to applaud and stuff was always there to keep everyone occupied and happy.

i was pretty impressed with how well they kept things rolling and stayed right on time.  these things always seem to take forever, but maybe they figured that because it was not just a game show played by kids but also had an audience full of kids in a wide variety of ages, they had to be strict about staying on schedule.  we'd been told that the taping would run until about 2:00 that afternoon, and as the obstacle course part wrapped up and we'd given all of the applause and cheering they wanted, i checked my watch and it was exactly that time.  the production staff had done quite a nice job indeed.

the episode we were watching is the third of this new season with the first episode scheduled to air on june 25th.  if you happen to catch the episode pitting the "kickin' cousins" vs. the "[some last name that starts with S] slayers", keep an eye out for the bean and her sister sitting next to each other in the second row during the game part and then again standing behind obstacles 5-6 and me right behind obstacle 8.  ha!  and let me know if you spot us!

oh - and if you want pictures of the new set and obstacles, buzzfeed got to visit the set and take pictures.  i was a little WOMP WOMP when i spotted a few moms taking quick selfies with their kids with the set in the background on our way out, but that's okay.

alright, fine.  i'm totally bummed that i didn't get a single picture in there.  dang it.

Email ThisBlogThis!Share to TwitterShare to FacebookShare to Pinterest
Labels: as seen on tv, walk down memory lane