the hub hasn't attended one of his company christmas parties in i don't even know how long.  no particular reason really...december is just usually such a busy time for us and the party is usually somewhere that's a good distance away.  this ends up turning into an overnight getaway, typically involving a stay at whatever hotel the party is being held at.  overnight dates aren't usually something that we can pull off easily, which is another reason to skip out on it.

he'd heard that the party was a blast last year, and so he asked me if there was any way we could pull off attending this time around.  i hit up my mom to see if she might be willing to come up and spend the night with the bean, and when she said she'd be happy to do it, we RSVPd to the party and made a reservation for a room at the monarch beach resort.

and then through a handful of turns of events, we somehow ended up with a second hotel room available for us to use and so instead of making my mom drive up for the night, the old lady and her special friend ended up hanging out with the bean and sharing that extra hotel room.  since the old lady had to work that day, we drove down with the bean to get us all checked in and wait for them to arrive before heading out to attend the party.

we pulled into the resort with a couple of hours to hang out and relax in the room before party time. 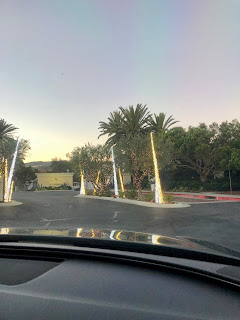 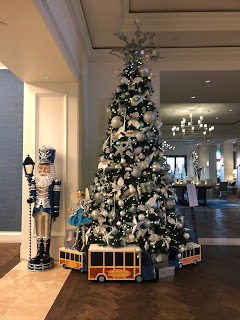 and the room was lovely.  huge bathroom, comfortable bed, balcony overlooking nothing special. 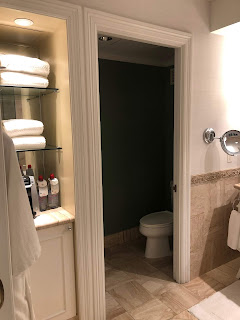 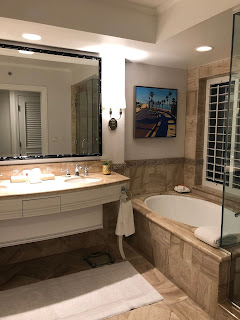 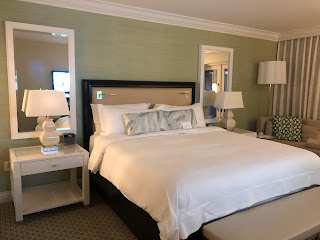 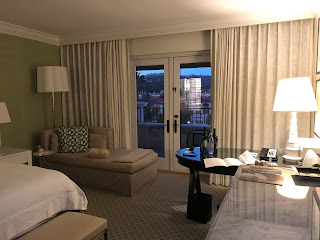 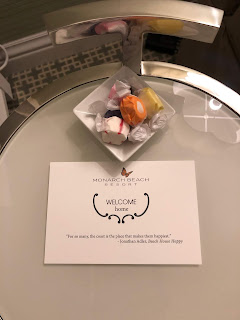 and chocolates on the pillow with turndown service. 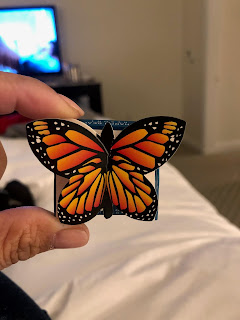 when the old lady and her special friend arrived, they stopped at our room to say hello and scoop up the bean before heading down the hall to their own room.  we had just enough time to get ourselves dressed and ready for the party, and after busting out the curling iron to make my hair pretty and putting on a full face of makeup, i threw on the dress i'd sewn up for myself that very afternoon. 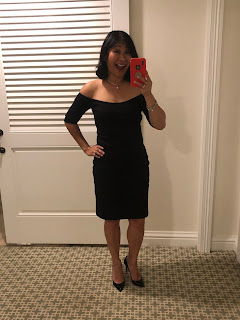 while we were getting ready, the hub discovered that his cigar case was missing.  unsure if he'd left it down in the lobby or even in the car, we headed down and retraced our steps from when we arrived at the resort.  the valet had placed it on the luggage cart, which sat in the lobby near the door while we checked in and then was brought up to us about ten minutes after we got to our room.  the case didn't materialize at the front desk, and so the hub headed outside to the valet to have the car brought up so he could take a look and see if maybe he'd left it in the back seat after all. 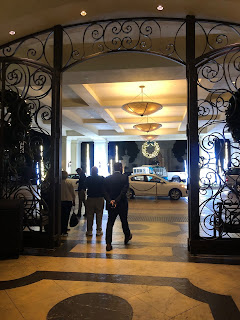 what else do you do while you're waiting and have nothing else to do?  take a selfie and send it to your kid to show her the fun jacket you picked up during a black friday sale. 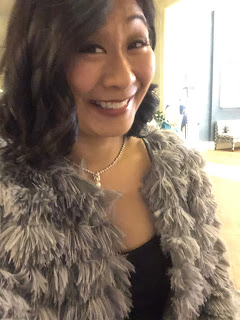 unfortunately, the cigar case was nowhere to be found.  the hub was visibly upset and annoyed, and while the manager came out to apologize profusely for the situation, it put a damper on our entire evening.  we walked into the party, where we said hello to all of the key people in the room and noticed that there wasn't enough seating for everyone present.  we stood in the long line for the buffet for a few minutes before deciding to get out of there and have a nice dinner together at michael mina's bourbon steak, which just happened to be down the hall.

there weren't any tables available, but we found seats at the bar where i ordered the "bee's knees."  it was sweet and delicious. 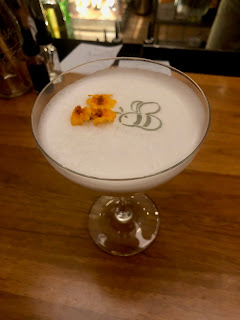 while the hub enjoyed a wedge salad, i happily dug into our gift from the chef - duck fat fries with three dipping sauces (green goddess, parmesan pesto and spiced ketchup).  they were delicious. 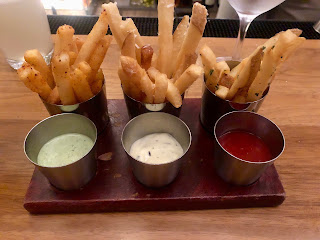 we'd opted to share the ribeye steak, which the chef sliced for us for easy portioning.  brussels sprouts and black truffle mac & cheese served as our sides, and everything was super delicious. 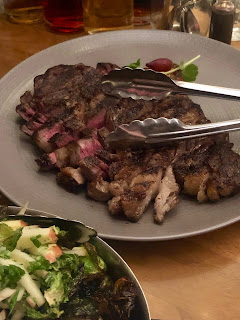 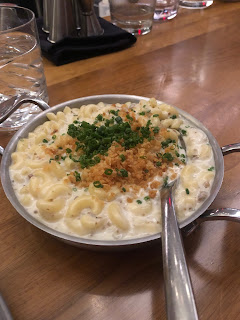 even though i was pretty full, i couldn't resist an order of fresh beignets served with a creme brûlée on the side.  there were four on the plate, so i ate one and took the rest upstairs to the kids. 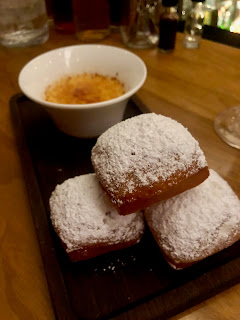 and if that weren't enough, we received a final treat:  house made sea salt caramels. 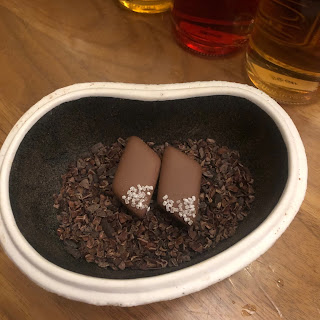 after we brought the dessert upstairs, the hub opted to head back downstairs to see if he could find some of his buddies to hang out with at the bar.  i wasted no time putting my sweats on and hung out with the kids for a while before going back to the room and falling asleep.

the next morning, we woke up and headed downstairs to the little market to pick up grab & go breakfast sandwiches and starbucks drinks, which we took outside to enjoy the view. 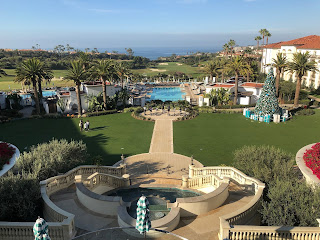 we were joined by this little guy, who sat on the edge of the chair and stared at us for a minute before taking off to join his friends. 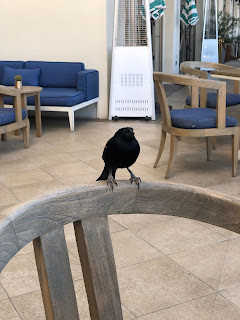 the security team at the resort had spent some time reviewing security footage from when we checked in, zooming in on the luggage cart and confirming that yes, the cigar case had been on it at one point. and then as it turned out, they recognized someone they called a "repeat offender" who snatched it right off the cart and walked away.

while the case itself was already a sucky loss, what made it even worse was that the hub had filled it with some special cigars that he'd intended on enjoying with a few of his friends out on the patio.  and then after the manager offered to let him choose one or two from their selection, he took it out to the patio where the bar manager informed him that he couldn't smoke it there and would need to go outside to the valet area.

we didn't stay much longer after we'd eaten breakfast.  bye, monarch beach resort.  thanks a lot. 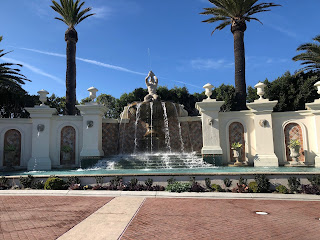 we took the long way back to the freeway, taking in views like this: 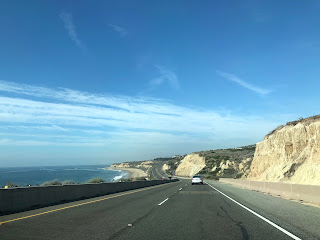 so now the hub is dealing with the resort's insurance company to be reimbursed for his loss.  they offered a measly $100 credit to our stay, apologizing but not exactly taking responsibility for the incident that was through no fault of the hub's in any way.  i know he's really annoyed by the whole thing, and i'm just appalled at how the resort handled it.

guess we can cross that place off of our list for future staycations.
at December 19, 2018