on our anniversary, the hub had been invited to a rather important client's holiday gathering down in orange county. in a fit of PMS, i'd thrown a fit when i found out and pretty much bullied him into opting out of attending so that we could go out on an anniversary date night.

but after the hormones were back under control i sheepishly brought it up again and told him that we could celebrate our anniversary another night so that he could go to the party and put in some face time.  he, of course, wouldn't hear of it, suggesting instead that i drive down with him, drop him off at the club and head out to do some shopping at fashion island for a couple of hours.  we could do a late dinner after i picked him up, which sounded like a pretty great idea to me.

before we left the house, you know i had to put the dress on.  i was kind of hesitant about it, remembering how i hadn't been able to zip it all the way up last year and wondering how it would go this time around. but as it turns out, 10 months of going to orangetheory fitness twice a week interspersed with barre classes paid off as the hub zipped it up without a hitch, even remarking that there was a little room to spare.  yay! 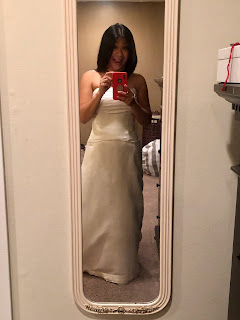 since he's been on this keto diet, he's lost a significant amount of weight.  in fact, he weighs less now than he did on our wedding day.  i think i picked up at least half of what he dropped, heh.  and so when i talked him into putting his wedding tux on he ended up looking somewhat like a little boy playing dress-up in his daddy's clothes.  and even better, i got him to do a twirl for me!


as for me, i settled for a simple boomerang.  i mean, it's not like you haven't seen me do this before.

we got the old lady to take a couple of pictures for us before we changed into going-out clothes and heading out for the evening.  she made sure to get our hibiscus watercolor in the background - the one we used as our wedding logo that the hub's grandma painted for us. 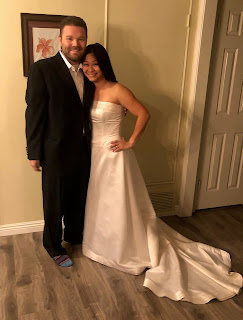 by the time we got through traffic and dropped him off at his party, i really only had about an hour and a half to screw around.  i decided to head over to sprinkles and picked up some treats to take home to the kids before making my way to fashion island to check out their lululemon store.  look at how gigantic it is: 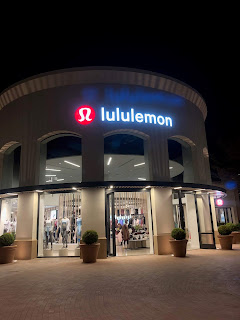 in fact, the girl at the register told me that it's the second largest store in the country - second only to the one in NYC, and even then only by just a few square feet located in their storage room.  heh.

i got back to pick up the hub right when he'd asked me to get back, giving us enough time to drive over to our dinner destination.  ruth's chris is where we had our wedding dinner on maui, and we like to have our anniversary celebration here every now and then. 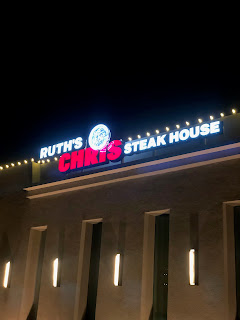 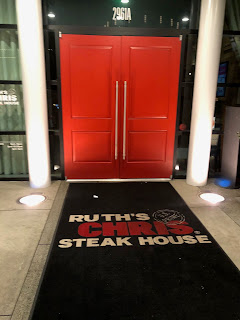 we were led to a table that was decorated with some fun confetti for the occasion, and handed special menus with an anniversary greeting. 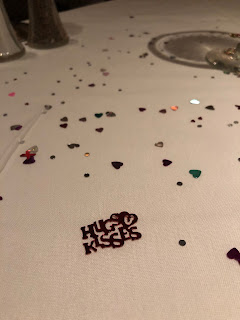 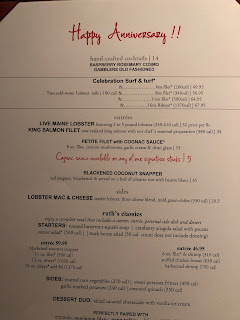 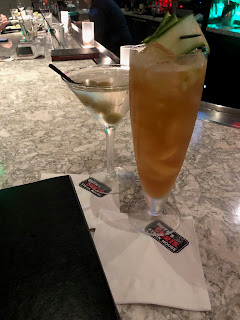 we kicked things off with the lump crab cakes and barbecued shrimp. 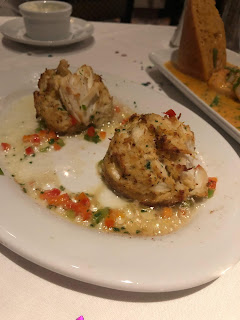 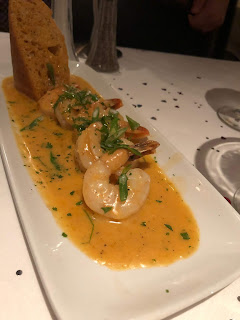 and then we decided to share the surf & turf entree with some asparagus and brussels sprouts on the side. super delicious. 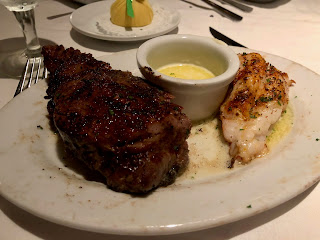 our server brought us a fun dessert to cap things off - a mini caramel cheesecake served with a scoop of vanilla ice cream. 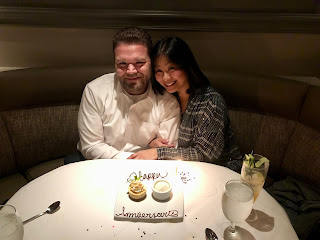 one last selfie before getting back in the car and heading home: 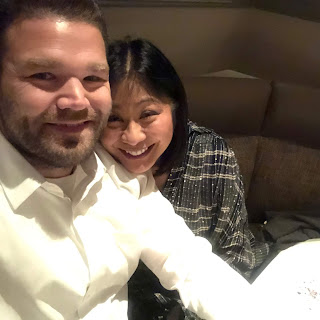