the bean spent her last day of school before christmas break with all of her friends at the 5th grade class party.  because there are only 34 kids in the whole class, it's easy to combine the two homerooms to celebrate things all together.

one of my mom besties is also my fellow room parent (which has been the case ever since TK!), and between the two of us we managed to cobble together a decent party for the kids. we ordered breakfast from the school's caterer, and they made some great looking platters full of pancakes and breakfast burritos that were stuffed full of eggs, cheese, hash browns and bacon.  the kids were pretty excited to sit together with their friends in the two classrooms and enjoy some food while they laughed and chatted. 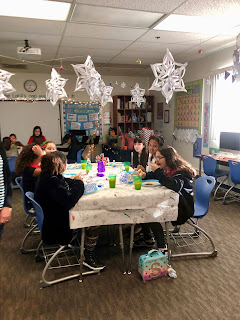 i've worn this same tee to her class christmas parties for the last four years in a row.  it's become my own little private joke. 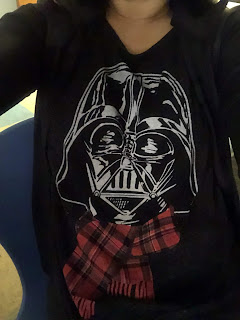 unfortunately, the bean's guy bestie was out sick and had to miss all of the festivities.  i had to cackle a little when i saw that the gift wrap he'd used for his contribution to the book exchange was the same exact one as the bean's.  and then his mom took his place in the circle so that he would still have a book to unwrap and read over christmas break. 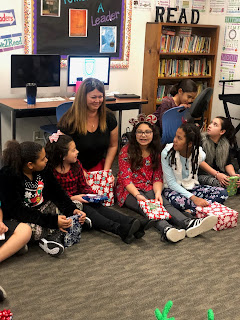 the bean ended up with the latest installment of the "diary of a wimpy kid" series...which she already has, read and took a reading counts test on.  but there were a handful of kids who hadn't read it yet and hit her up to trade.  she ended up choosing one of the kids who'd ended up with the shittiest book in the entire exchange - the book was clearly pulled out of someone's adult book collection, without any thought put into the fact that it was for a 5th grade class party where a 10-11 year old kid would be the recipient.  it was an old paperback, creased and dogeared, and when you flipped through the pages you caught a whiff of that weird old smell that you notice in thrift stores and library basements.  i knew she had taken pity on the kid who'd received it, and i told her later on that i appreciated her thoughtfulness and kindness in choosing him to trade with when i knew she would have been much happier had she ended up with a book like this: 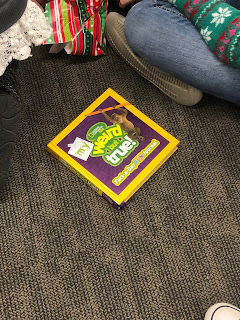 after we played a couple of games, we put out some sweet snacks and started a movie ("the christmas chronicles" on netflix, which we didn't get to finish but will have to watch at home because it looked really cute).  she must have been restless, because she didn't want to sit for it. 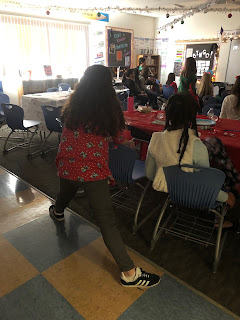 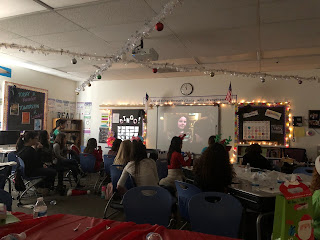 i got her to take a quick selfie with me before it was time to pack up and go home. 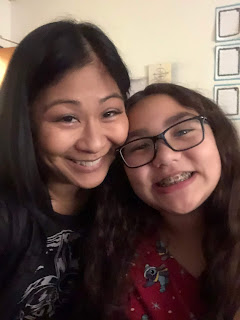 and now we're free for two whole weeks!  no homework, no figuring out lunches, no getting up at any specific time, no strict bedtime.  glorious.
at December 21, 2018

Email ThisBlogThis!Share to TwitterShare to FacebookShare to Pinterest
Labels: christmas is coming, the bean is a party animal