i've been such a slacker over the last couple of weeks with the blog posts!  man...i've been so busy trying to get ready for that christmas boutique (which is over now, by the way, and i'll recap it a little later).  and last week - oh, last week was such a mess.

so the bean had her second cheer competition last weekend up in bakersfield, which is about 2.5 hours away from home.  she'd been feeling a little under the weather with a weird stomach bug earlier in the week that came out of nowhere and made her barf, which is unusual for her.  she's never been a barfy kid, and i can count on one hand the number of times she's thrown up in her whole life.  but by friday, she seemed to be back to normal and we hopped into the car after school and made our way up to the bakersfield marriott.

after we checked in, we decided to head out for some dinner and found this place via yelp: 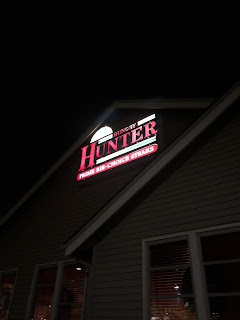 and that's where things started to go south.  as we sat at our table, laughing and chatting away, i started feeling off.  exhaustion hit me like a ton of bricks, and when the food came i just wasn't in the mood to eat any of it.  and as you know, that's very unlike me.

before we went back to the hotel, we made a stop at cvs to pick up some pepto for the bean, who was still feeling a little unsettled.  i was really feeling like crap by then and sat in the car while the two of them went inside and loaded up on meds and snacks and water.  and when they got back and we started to make our way out of the parking lot, i knew things were about to go down and i asked the hub to stop the car so i could get out.  i opened the door and sat there for about five seconds and then realized that it was coming...so i jumped out of the car and barfed all over the parking lot.  lovely.

i thought i was feeling better, and made it all the way back to the hotel where the hub dropped us off at the door before finding a parking spot.  the bean and i headed into the elevator, and as we got out and started walking down the hall i felt that awful feeling again, and i pretty much shoved my poor kid out of the way as i ran into our room and got up close and personal with the toilet.  it was just horrible, and i was aching from head to toe.  the bean, that poor thing, sat on the bed with wide eyes waiting for me to come back out, asking me if i was okay, telling me how sorry she was that i was feeling so sick.

the hub came into the room then, armed with the bag of medication and bottles of water, and after making sure that we were okay decided to head downstairs to grab a drink and enjoy a cigar after the long drive up.  and while he was gone - well, let's just say that my body wasn't quite through yet,  ugh.

he was gone for a couple of hours and when he finally came back it turned out that his quiet time downstairs hadn't exactly gone as planned.  most of his time was spent in the restroom, as he somehow got hit with the same thing that plagued me.  we went to bed and tried our hardest to get some sleep, but neither of us really slept much that night.

the next morning, i felt like i'd been run over by a semi.  the hub was feeling just as terrible, and it was all i could do to pull myself together enough to do the bean's hair and makeup and help her get dressed and ready for competition.  i walked her down to meet up with her team, and with a few hours between their call time and her first performance i sent her off with one of the team moms to join the rest of the girls while i headed back upstairs in an effort to try and get some rest.

unfortunately for us, we were so wiped out by this thing that we both ended up missing the entire competition.  my mom bestie tried her hardest to go live on instagram when it was time for her to perform with both teams, but the reception was terrible in the arena and i sat there in bed crying miserably at having missed my kid perform in a competition for the first time.  it sucked.

we stayed in bed trying to gather up enough strength to get packed up and outta there, lingering in the room so long that housekeeping was trying to get in to clean the room for the next occupants. it was a good two hours past checkout time before we finally got out of the room, apologizing to the desk staff and explaining why we hadn't left when we were supposed to.  they were sympathetic and sent up a staffer with a cart to help us bring our bags down, and we circled the arena a couple of times looking for a spot to park and wait for the bean to come out.  and when she finally did, i got out of the car to thank the coaches and my friend for keeping an eye on her for us.  but the bright side:  the bean's team took first place in the competition!  yay!

i felt terrible that the hub drove us all the way home feeling as terrible as he did.  i tried to get him to let me drive even part of the way, but he waved me off, saying that we were both feeling awful and it didn't matter which one of us did the driving.  and i tried my hardest to stay awake, but i was sitting in the back so that i could help the bean take her hairpiece out and clean off her makeup and when she passed out cold, so did i.  we were all grateful when we finally pulled up at home, where the old lady, her special friend and stevie the dog were waiting for us.  they'd taken care of molly for us while we were gone, and made a quick exit not long afterwards.  the old lady had also been hit by this stomach bug earlier in the week, and for some reason even molly had barfed a couple of times.

we're all back to normal now, thank god.  but all i can say is BEWARE.  this crap comes out of nowhere and hits HARD.  i wouldn't wish it on my worst enemy.  bleh.
at December 10, 2018