i am most definitely not a quilter

oof, i've been quite a slacker this week.  with the bean out of school for christmas break and the holidays and a whirlwind trip to texas and back and then me not feeling 100%...well, it's been a little crazy around here.  and i swear i've been thinking about what to blog about because there's so much to share, but of course i've been either sitting on the couch zoning out in front of the tv or trying to achieve that always-just-a-little-out-of-reach goal of emptying the laundry hampers. blah.

the old lady has been after me for a solid five years to make her a t-shirt quilt with a stack of souvenir shirts she'd been collecting forever.  i'd been putting her off because i just didn't know if i was up to tackling that project again, but then the little shit put it right at the top of her christmas wish list and then i knew i was completely on the hook.  now i'd been slowly prepping for it, pulling out all of the shirts, stacking them up and sifting through them to choose the ones i wanted to use, even getting a head start on cutting a few of them out using my handy dandy 12"x12" template. 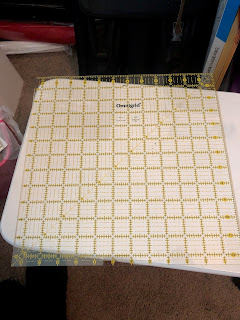 i vowed to get started on it for real once that boutique was over and done with, and on that monday i did just that.  i holed myself up in the sewing room again and went through those shirts again, cutting them all up and arranging them in an order i liked best.  i'd tried to select shirts that would be meaningful to her, from vacations and events and fun times in her life.  and i had so many jonas brothers t-shirts that i set them aside to hopefully make a separate blanket out of. 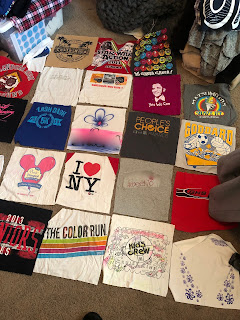 to be sure i was doing everything right, i pulled up the blog post i'd written so long ago that detailed the process of the first quilt i'd done.  i was so glad i'd had the forethought to link the tutorial i'd used for the binding part of the quilt - i was pretty sure i'd be able to get it right, but it's always nice to have a source to double check with.  and this time around, i was able to skip the interfacing step because i have better sewing equipment than i did before.  i got started on sewing the shirts together: 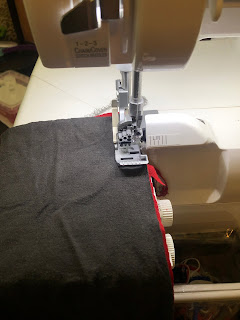 and in what seemed like no time at all, i had the top layer done. 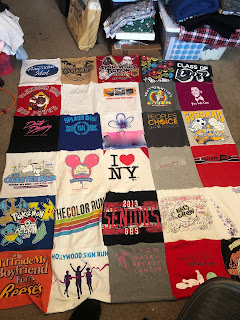 putting the rest of it together was a bit of a pain in the ass.  i'd bought a way-too-big layer of batting that would go between the shirts and the fleece bottom, and it was a little tricky to maneuver it all because for some reason i decided not to trim it first.  dummy.  and like the last time, i had two fleece blankets i'd picked up at IKEA that i sewed together to make the bottom layer.  those things are like $3 apiece, which is way cheaper than buying the yardage at joann's even with a coupon.  but i spread it all out, attached the layers together using a shitton of straight pins, spilled a little coffee on one corner, spit out a ton of curse words, stuck myself about a bazillion times with those pins, and did almost all of the quilting along all of the shirt lines until it was time to leave to pick up the bean from school.  i rolled up the quilt, stashed it in a corner of my bedroom that i knew the old lady wouldn't just stumble across, and there it sat for almost two weeks while the holiday season sashayed on by.

when it got down to the friday before christmas, i knew i'd put it off as long as i possibly could.  but i also knew that it was pretty much 90% done, and i was feeling pretty confident that i could finish it off in about an hour or so.  i even had time to stitch up a present for our mail carrier to go with the gift card we'd bought for her - how cute is this hand sanitizer holder?  i hope she liked it. 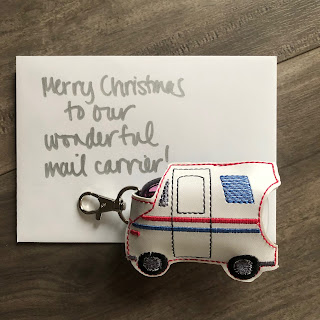 and then i sat down and unrolled that quilt, sticking myself with those pins a few more times in the process, muttering a bunch more curse words under my breath (because the bean was home), making a few mistakes that required some seam ripping, but still managing to get it done in just over an hour. and voila: 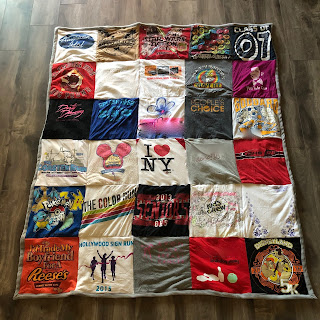 there are tons of mistakes in it, but i think it turned out okay.  and the hardest part during this process was not sending pictures of it to the old lady, because she's usually one of the first people i share this kind of stuff with.  i did send it to my co-leader because she's my sewing buddy and i knew she would share in my joy (and she didn't disappoint).

i guess i better get started on that second quilt soon though, because if i wait much longer i know i'll forget all about the things i learned to do (and not to do) along the way.  not to mention, there's a nice stack of shirts in the corner of the bean's closet just waiting for me to tackle too.