q is for quilt.

for months, the most ridiculous stack of race t-shirts from all of the runs i've done over the last couple of years was hanging out in a corner of our bedroom.  i don't have a whole lot of drawer space, let alone closet space, and so i just kind of kept adding to the pile every time i came home with another shirt.

finally i decided that it was time to do something with them.  but i didn't want to give them away (every one of those things was hard-won, dammit), nor did i really feel the need to keep them even to sleep in.  after giving it a little thought, i decided that maybe it was time to pop my quilting cherry.  so i turned to the google, which rewarded me with a bazillion different blogs and tutorials on how to make a t-shirt quilt.  i perused a good handful of them, hemmed and hawed over it a little longer, and then figured i'd just go for it.  why not, right?

the first order of business was sorting through the shirts to pick out the ones i wanted to use.  i don't know why i didn't take a picture of the original pile, but here's the stack of the ones i decided to keep: 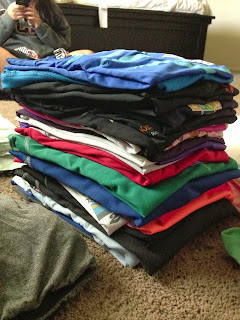 yeah.  that's the KEEP pile.  most of them are made out of that dri-fit/tech-type material, which i actually do wear for runs and other workouts.  plus, the plain ol' cotton ones are just softer anyway.

then it was time to start chopping 'em up.  i don't know why the first cut made me so nervous, but i'm a dork, so there's that.  off went the sleeves and the neck from each shirt. 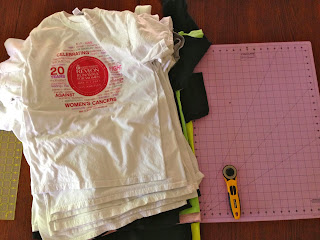 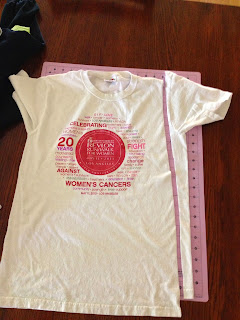 step one, check.  now not only did i have a neat stack of cut-up shirts, but a gigantic pile of excess fabric.  and there was t-shirt dust everywhere that made me sneeze about a bajillion times. 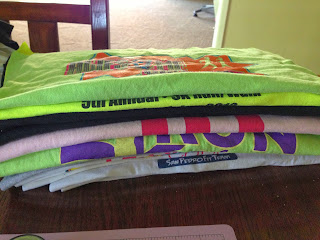 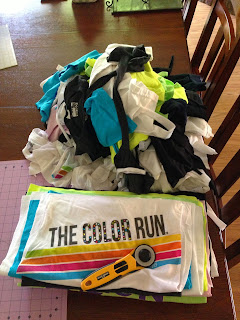 i'd picked up this handy-dandy quilting square at joann's, and it proved to be my BFF during this part of the process.  i went back through the pile one by one, trimming them down into a perfect 12" x 12" square. 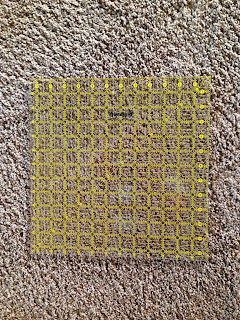 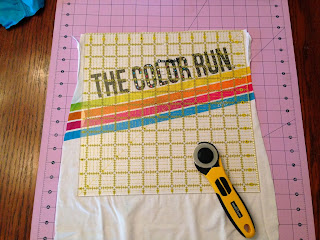 when i was done, my pile of leftover fabric was even bigger. 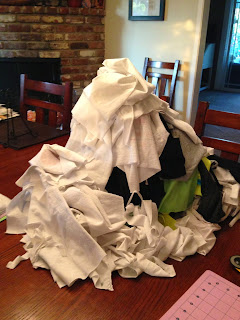 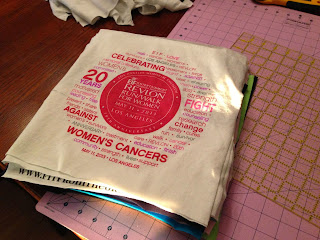 the next step was to adhere some light interfacing to the back of each piece.  because t-shirt fabric is so squirrely, it helps to stabilize it a little to make it easier to work with.  i ironed it on carefully and then trimmed away the extra from each side. 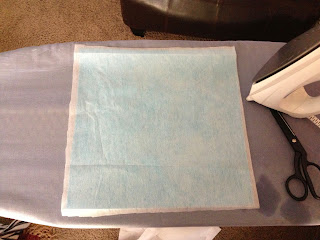 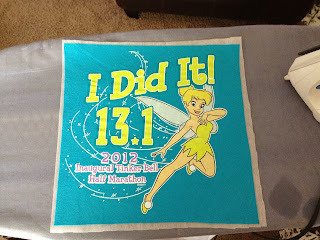 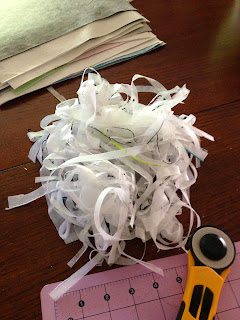 now it was time to lay them all out and figure out what order to sew them in.  i tried to space them out so that the colors were all evenly distributed, and i think i did a fairly decent job.  molly seemed to think so, anyway. 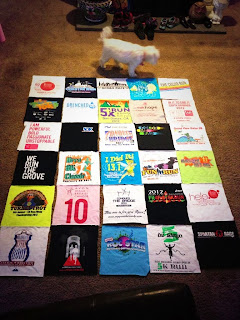 sewing the rows together was pretty easy.  i was pretty proud of myself for not having to bust out the seam ripper even once during this part. 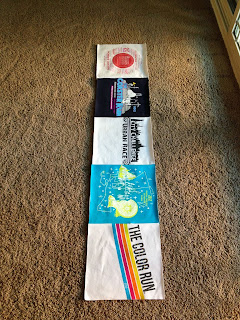 i'm usually pretty breezy about pinning stuff together.  like, i always think i can just hold it together as i sew.  and for the most part, that works out for me.  but i wanted to be careful with this so that i didn't have to go back and fix mistakes.  out came the pins to make sure the fabric didn't wiggle around: 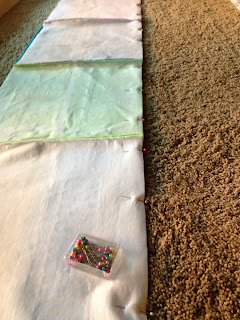 with the front of my quilt finally done, i hit up joann's again to find some batting to use in my quilt.  this should be pretty easy, right?  i mean, how difficult could it be?  and then i got there and was stupefied at the sheer number of different types of batting to pick from.  and this was just one side of the aisle!  good gracious. 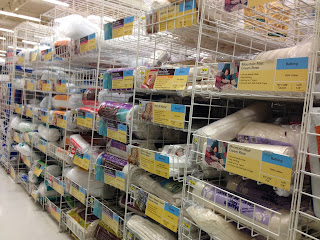 i ended up going with this: 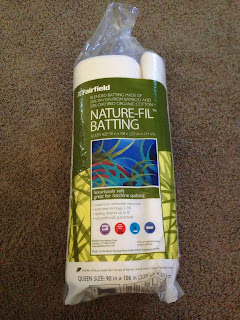 back at home, i laid it out and placed my shirts on top.  clearly, i overestimated how big my project was going to be.  that's okay, though - better too much than not enough.  also, i don't know how i managed to jack up the alignment of the bottom row, but by that point i just didn't give a shit anymore.  i'm not trying to win a prize or anything with this thing, ya dig? 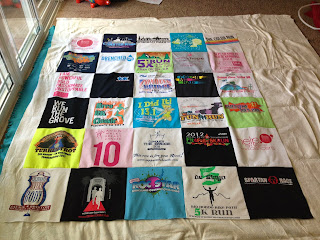 the bottom layer was comprised of two fleece throws i'd bought at ikea for like $3 apiece.  i knew that would be way cheaper than buying yardage at the fabric store, and the color worked just fine.  see, i can be thrifty when i want to be.

i pinned everything together, folded it all up, and put it down in a corner of the office.  and then it stayed there…for two months.  maybe three.  i lost track.  i was a little intimidated by the quilting process, and although i'd already bought a walking foot attachment for my sewing machine, i wasn't in the mood to figure out how to put it on.  not to mention that it was hot as hell, and making a blanket - not exactly high on the priority list.

until this weekend, when it was cold and rainy and wonderful.  i took out that walking foot, looked at the thickness of the stuff i was sewing together, and figured i'd give it a try first without attaching it.  and lo and behold, it worked out just fine.  that walking foot will just have to wait for something else.

i sewed the two blue fleece throws together, laid everything out, chopped off the sides, pinned it all together, and got to work.  the first order of business was to do the quilting part - most people will sew some sort of decorative pattern through each square to bind it all together.  i suppose you could just sew all the sides together and call it a day, but quilting keeps it all in place so that the layers of material don't move around and get all jacked up.  anyway, i decided to keep it simple and opted instead to just sew down all the lines around each square.  the back of the quilt ended up looking like this: 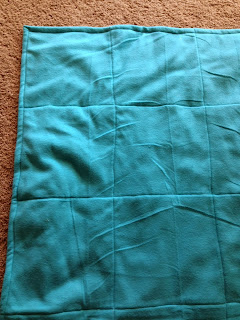 when that was all done, i spread it out on the floor again and trimmed the edges a little more to leave about an inch or so of the bottom layer to do a "cheater binding." 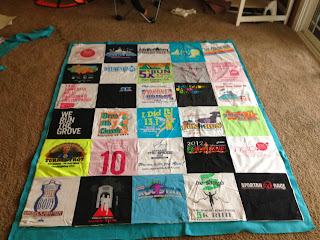 folks who know their shit usually make or buy actual binding - long strips of fabric that you wrap around the edges of a quilt and sew down.  but because i'm a lazy ass who wasn't in the mood to add any more work to this thing, i did it this way.  i folded the fabric over, pinned it in place, and sewed it down.  at the end, i folded the corner down and then worked on the next side, and over and over until all four sides were all done. 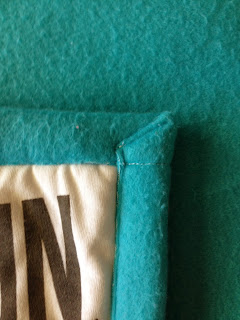 because the edges were all jagged and uneven, i picked up my tiny trimming scissors and cleaned it up a little.  i snipped off all of the remaining loose threads, and then i totally patted myself on the back for finally finishing this damn thing.  the bean was happy to take a picture of my triumphant finish. 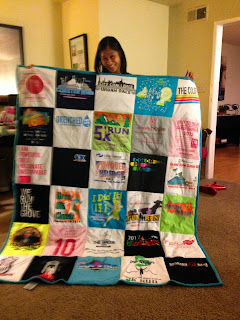 and then she wanted a turn too. 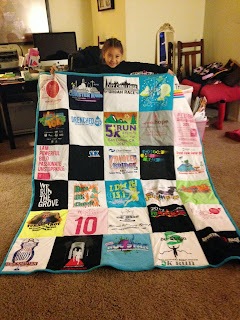 again, this thing is FAR from perfect.  there's all sorts of stitching that really shouldn't be visible, and the uneven lines on the bottom row really bug the hell out of me whenever i look at it.  but i'm pretty proud of my very first (and last.  i ain't doing this shit again, such a pain in the ass) quilt.  and the timing is perfect too, because the last few nights have been kind of chilly, and this thing is probably the warmest blanket in the house.  the bean and i are digging snuggling in the couch in it. 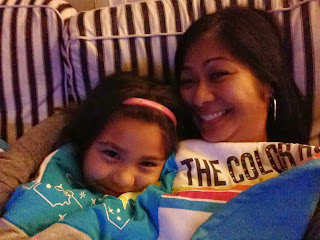