all i want for christmas is…renewal

with the expiration date on our disneyland annual passes looming ever so near, we decided to cram in as many visits as we could get away with during the final week.

i know. it's tragic. wan, aren't you gonna renew, you ask? well, yeah...but not till well after the holidays. this is pretty much the worst time of year to lay out that kinda dough, know what i mean? of course, the teen and i died a little more as the days passed and our time at the happiest place on earth grew shorter and shorter.

as luck would have it, the bean had a half day at school on the last friday before d-day. we picked her up at 11:30 and headed right down to anaheim for some disney fun. because of the odd hour, we scored on a great spot in the parking structure and helped her into the cinderella dress she'd asked us to bring for her before hopping onto the tram. 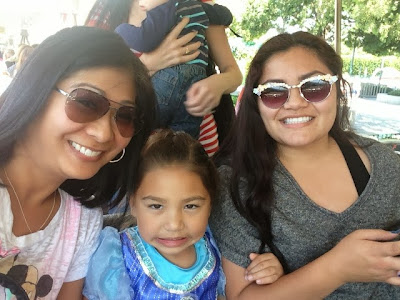 they were setting up stages and lighting and stuff to tape the annual christmas day parade that weekend. 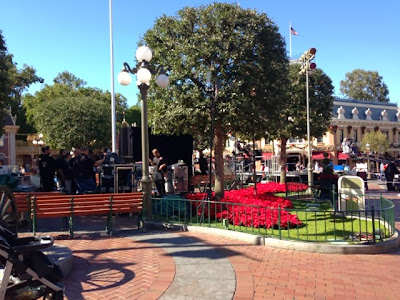 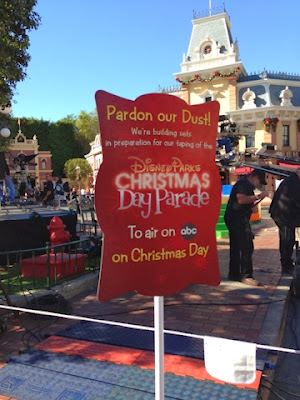 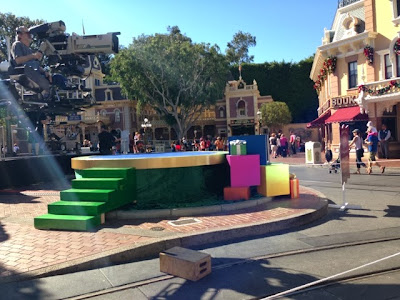 annual passholders often get random opportunities to experience a little extra magic, and that evening's offering was this: 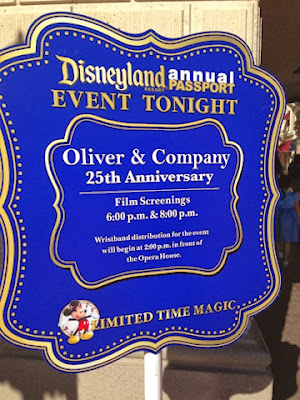 not wanting to waste precious park time, we opted not to get wristbands and instead focused on having as much fun as we could squeeze in. since none of us had had lunch, we headed to cafe orleans to have some mint juleps and share a monte cristo sandwich.

i would kill for a chance to return here for a fabulous, exclusive meal. 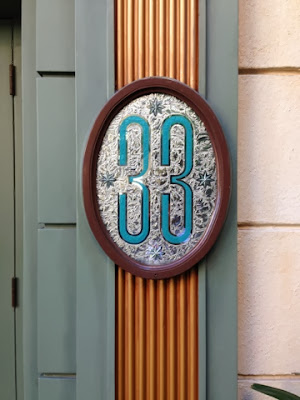 as we waited for a table, i spied this lovely little drinking fountain that i swear i've never noticed before. 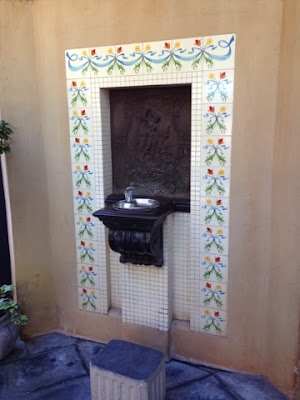 cheers to a fun afternoon and evening! 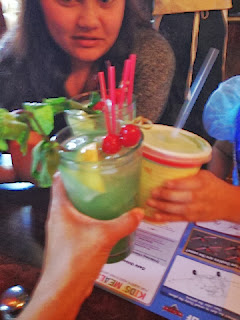 the teen and i shared this gut bomb and enjoyed every bite of it. 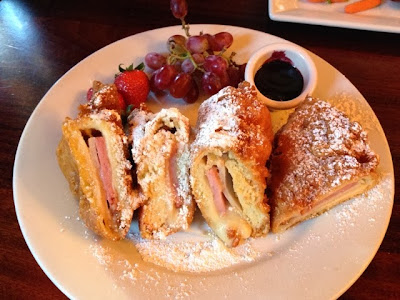 the seasonal gingerbread beignets sounded fabulous, but after what we'd just eaten...not a great idea. 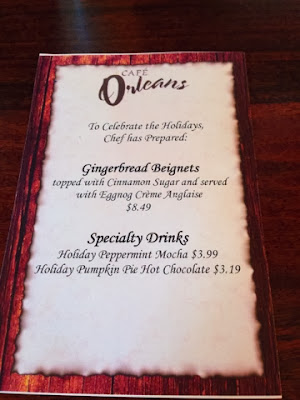 we managed to talk the bean into trying something new - the haunted mansion, which is currently decorated for the holidays, "nightmare before christmas" style. she's scared pretty easily, so we've never really pushed this ride very hard. after being reassured a bazillion times that it was a slow ride with no drops, she reluctantly got in line.

think she liked it? 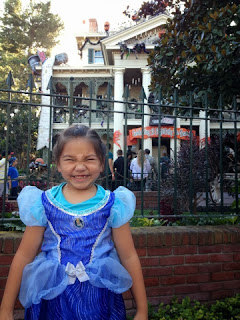 despite the fact that it was still very early november, the whole park was pretty much fully decked out for the holidays. the actual launch date for full-on disneyland christmas wasn't till a few days later, but this was already in full swing: 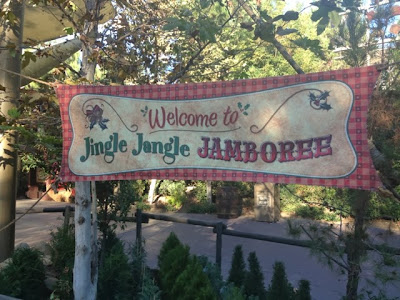 i didn't want to do it, i swear. but there was no line...and that's hard to resist. 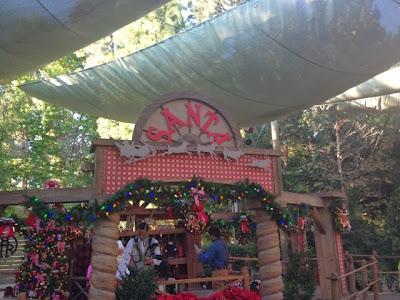 still, i was a bit incredulous. 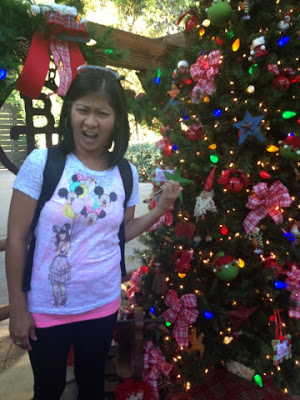 while we waited for our turn with the big guy, we were treated to a visit with the missus. 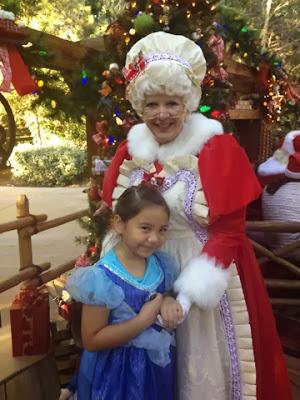 so yeah, this happened. 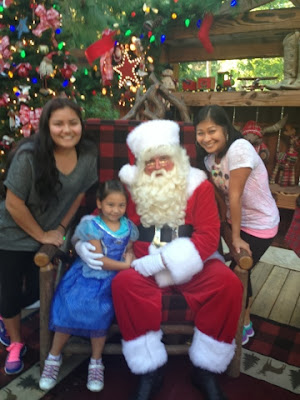 the nice thing about being able to check out this little area so early in the season, before a lot of people realize it's even there, is that the character meet & greet lines are practically nonexistent. we walked right up to mickey, who took the bean by the hand and went on a little walk across the floor. it was adorable. 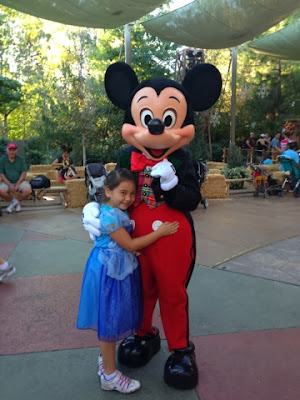 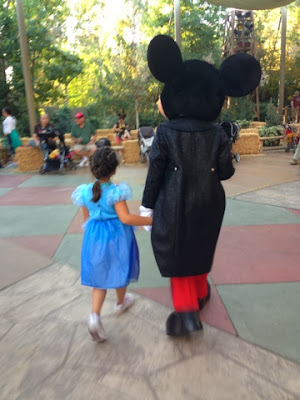 we sat down to grab a drink and munch on our first candy canes of the season, given to us by one of santa's elves. 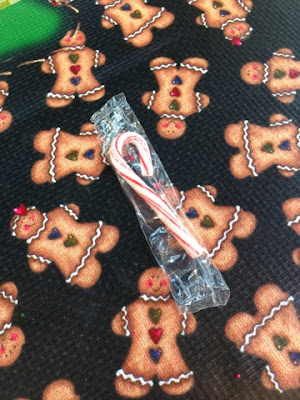 mrs. claus happened to walk by and stopped to talk to the girls again. 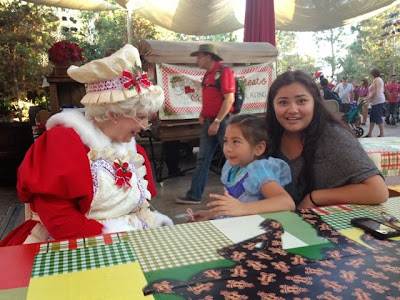 next we hit up a showing of "mickey and the magical map." we've seen this show a number of times, but it's really fun to watch. plus, i always get a kick out of this guy, who looks just like my beloved cousin 420. 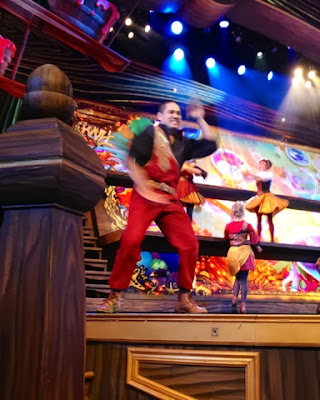 the holiday version of "it's a small world" is always a favorite. plus, you aren't stuck listening to THAT song the whole time. instead, it's "jingle bells," which is much less annoying.

we got out of there in time to find a spot for the christmas parade. 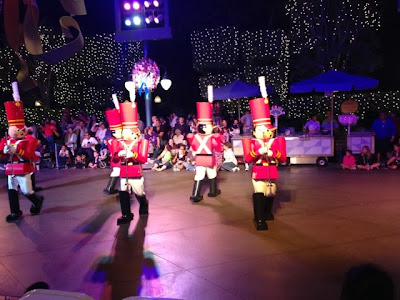 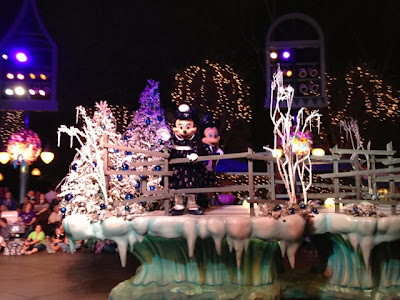 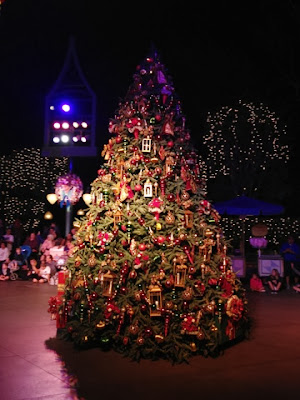 the hub came down to join us for dinner, and the bean was so pooped from the activity of the day that she passed out cold right there at the table. we were really hoping she'd last until the fireworks show, but it was not to be. and so he picked her up, handed us the keys to his car, and took her home while the teen and i went back inside the park.

man, disneyland does fireworks right. the only bummer was that the staging for the christmas day parade taping blocked us off from some of the best viewing spots. 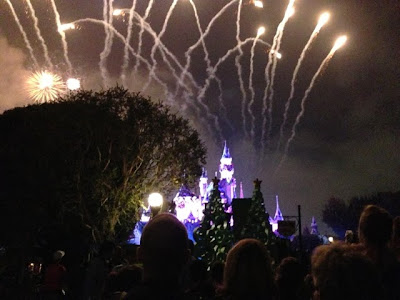 but we were in the right place for the "snow." 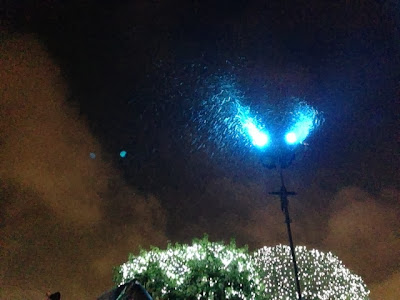 it's hard not to embrace the holidays when they're covered in disney magic.
at November 21, 2013