i am INCREDIBLY photogenic.

i finally got a couple of my biggest fears behind me: being out completely under and having my bottom (majorly impacted) wisdom teeth removed.

two things pushed me to get it done - one being the dental appointment for a checkup and cleaning that i ended up postponing because i was supposed to have had this done over the summer. the other was the fact that MIL was at the tail end of her visit and she'd volunteered to come with me, be my driver and take care of me through the whole thing. how awesome is she?

when i called to make my appointment, i found out that i could either split it up into two visits: one for the x-rays and consultation and then another for the actual surgery. or i could simply do both in one appointment and just get it all over with in one shot. well, duh. as much as i dreaded it, i went with option B.

the office was in a nondescript business park in diamond bar. 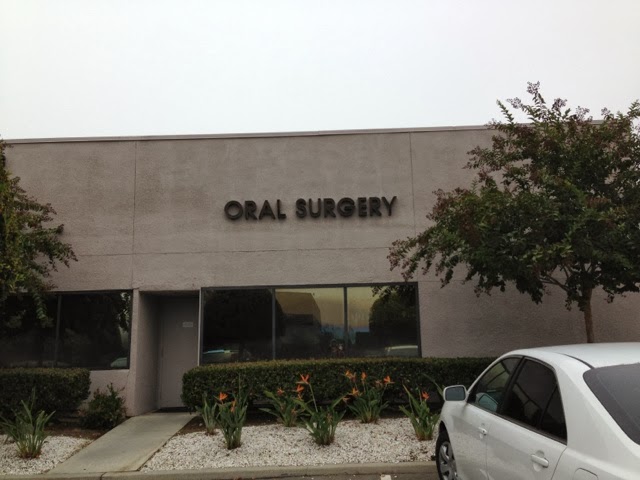 i tried to joke around and laugh it all off, but in truth i was pretty petrified. my anxiety was at an all-time high, i'd had to fast in preparation for the anesthesia, and i'm truly terrified of needles. i kept thinking of how the bean had endured being put under at the dentist's office when she was so tiny, and i just kept telling myself that if she could do it, so could i.

the first part was easy. the x-ray machine was giant and i had to bite down on a plastic stick and hold still while the machine rotated around me and took the x-rays. the image was already up on a monitor when i came in and sat in the chair. 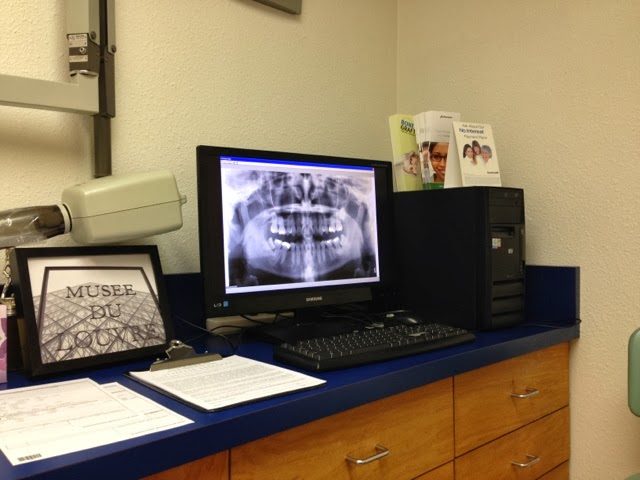 can you say "freaking out silently"? 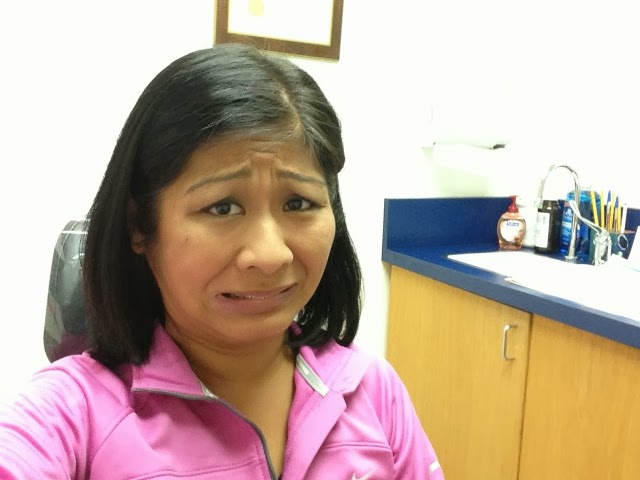 the oral surgeon came in, briefly discussed what would be happening next, and then i was filling out a plethora of forms and signing a bunch of acknowledgments. the next thing i knew, i was being shown into another room where nurses were busily prepping for my procedure.

i had one monitor stuck to my belly, on on either side of my chest and my arms were strapped down. the nurse knew that i was stressed over the needle and the anesthesia, and she assured me that they used a small gauge needle...the kind they use on little kids. that made me feel a lot better, and it showed in my blood pressure. they'd had to check it three times because it was higher than normal due to my anxiety.

the doctor strode in, got a quick briefing on my stats and wasted no time in sticking me with the needle and inserting the IV. it stung just a little, and with the worst (to me) part over with, i relaxed considerably. he was pretty breezy and asked me about my kids, and the last thing i remember is telling the room how old my girls are.

so...i don't even remember taking these. 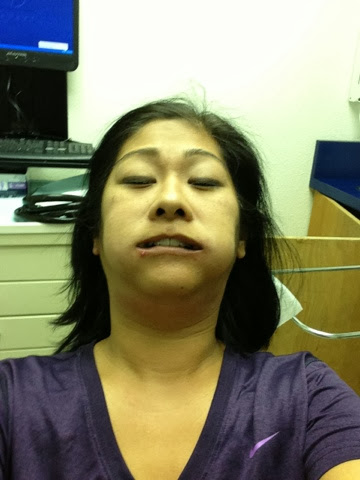 clearly, the needle poking was still fresh on my (foggy as hell) mind. 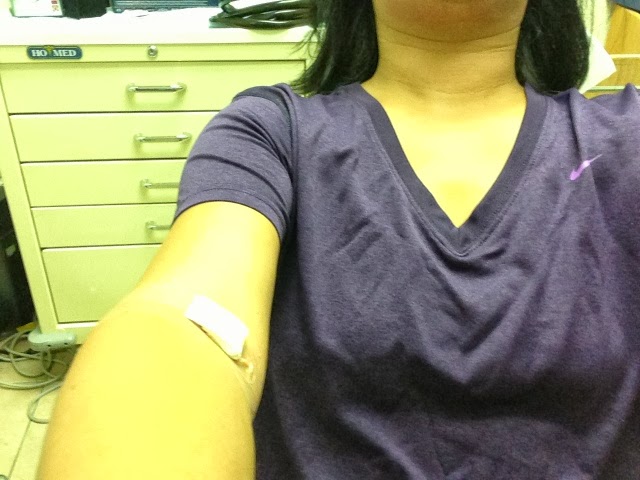 i vaguely remember snapping these as i was moved to the recovery room. i'm not quite sure why my pose of choice was a thumbs-up, but there you go. 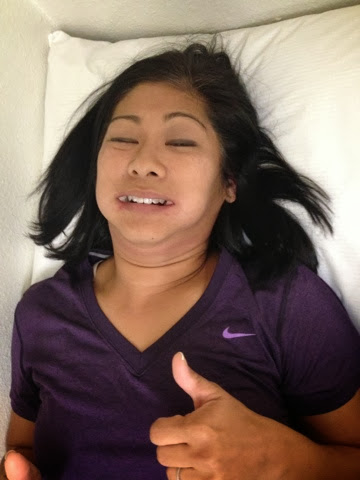 yo, i am friggin' adorable. 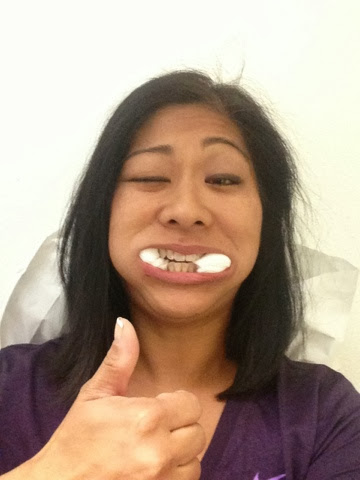 i'm not sure how long i was lying there before the nurse helped me up and out towards the car where MIL was waiting for me, right outside the door. but wait...here's a couple of gems MIL snapped for posterity. she later said she'd contemplated taping a video, and i'm so sad she didn't. that shit would've been comedic GOLD. 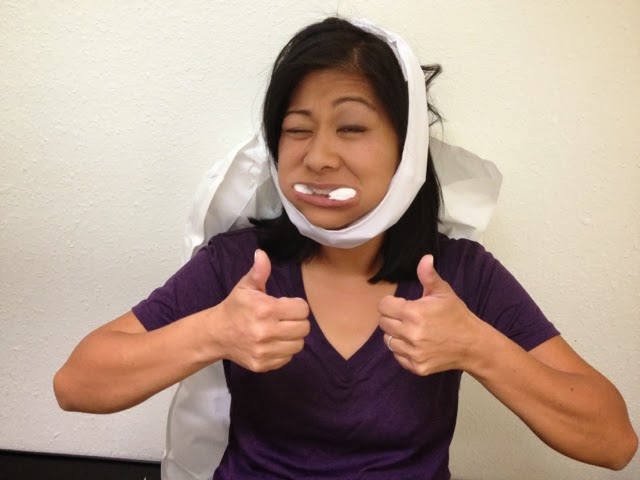 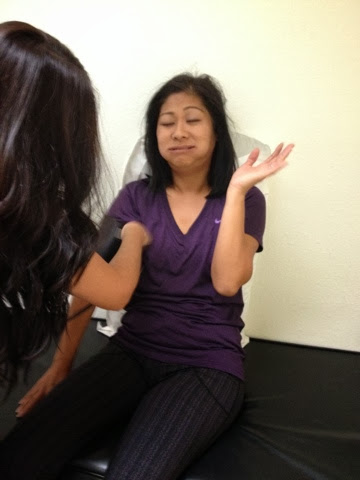 in the car, i apparently thought it was important to continue the selfies as MIL stopped at target to get my meds and some other necessities. 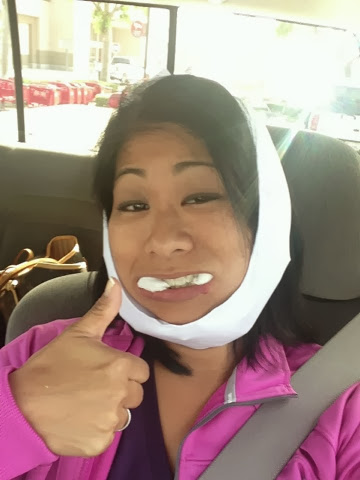 something else i seemed to think was a great idea was to hop onto twitter. hey, at least i was entertaining. plus, this answered the burning question posed by the surgeon: am i a happy drunk or a surly, sad one? 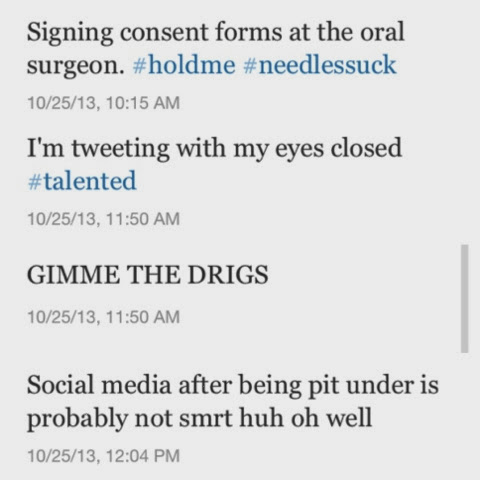 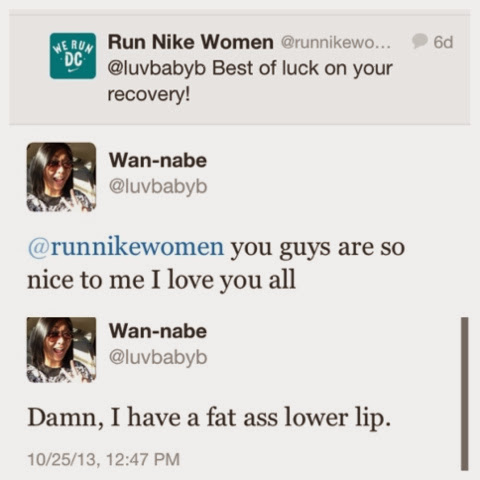 we won't even address some of the craziness i put on facebook, let alone the handful of emails i found later. again, i'm oh so happy that I was able to entertain some of you.

thanks to MIL paying closer attention to the post-op instructions than i possibly could, i got these for soaking up the ickies instead of nasty ol' gauze pads. 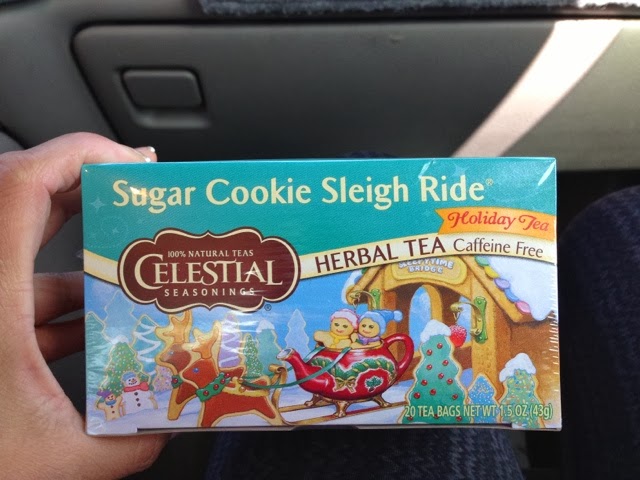 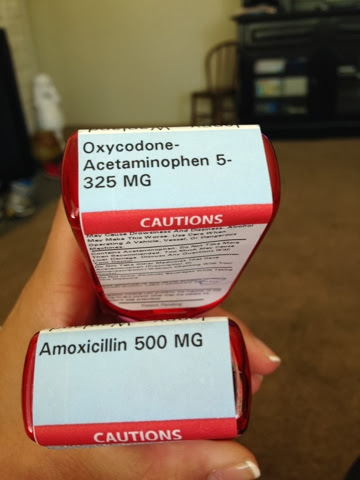 lastly, knowing i'd been fasting since the night before, she picked up some nice, soft mashed potatoes and gravy for me. honestly, my MIL is the best. 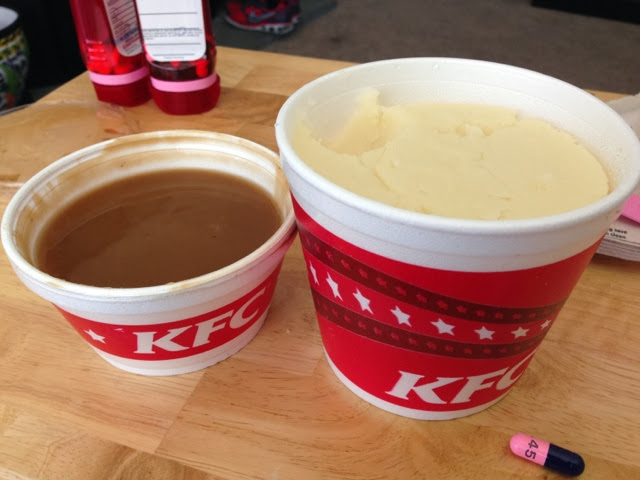 much of the rest of that day was spent on the couch in my stretchy pants, snuggled in a soft blanket and dozing on and off (mostly on).  the next morning at the bean's soccer practice, i threw on that sexy ice pack and sat my ass in a chair. 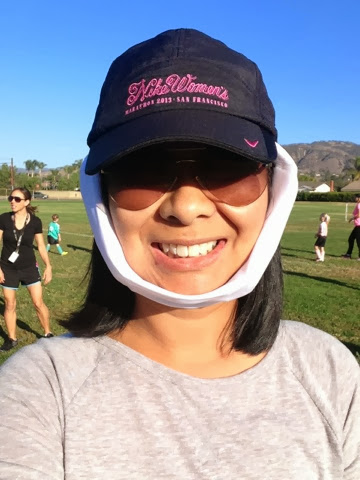 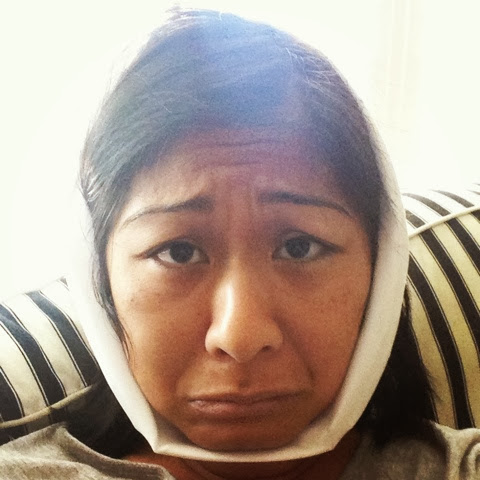 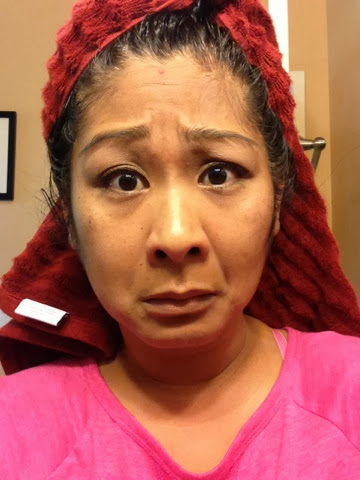 day four was more of the same. 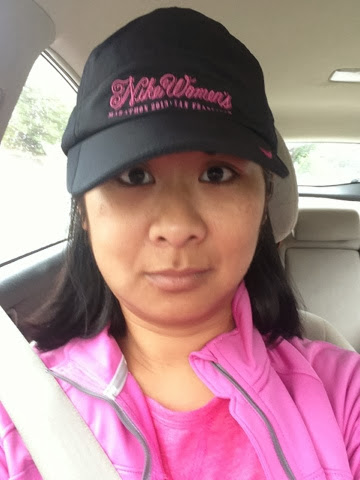 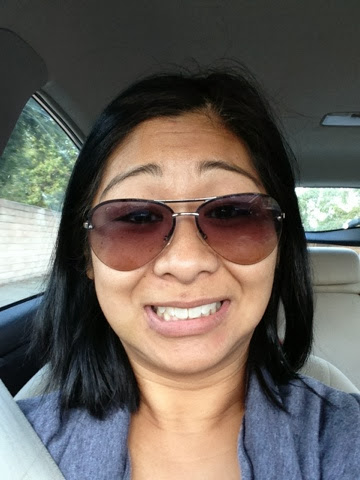 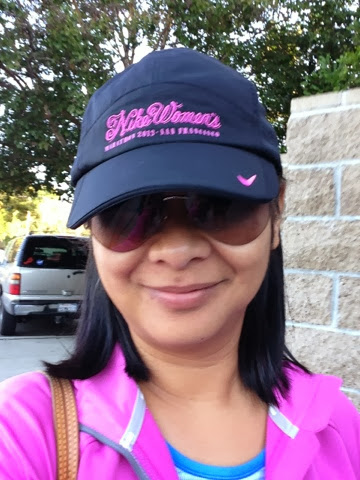 and today, i head back to the surgeon's office for a checkup to make sure all is well. the swelling is right around 97% gone, the pain has lessened to a dull ache on the left side, and i'm able to eat most of what's in my typical diet.

i'm still holding out some hope that the weight i gained back from my bronchitis loss will have gone away again with the wisdom teeth extraction, but we'll see. i was banned from any sort of exercise for the last week, and i'd already taken it easy the week before since coming home from the nike half. i'm feeling über flabby, ugh.

good thing i have a 5K tomorrow! unless i get told otherwise, i'm gonna hit it hard again starting this week. after all, i've got tinkerbell half in january.

Email ThisBlogThis!Share to TwitterShare to FacebookShare to Pinterest
Labels: dentists aren't so scary after all, nablopomo, needles suck, the most ridiculous pictures ever