when i realized that the bean was going to be home all week for thanksgiving break, i scrambled a little to think of things for us to do. i didn't want to be stuck at home the whole time, but our usual go-to activity wasn't available to us anymore - our disneyland annual passes have expired. waaaaaaah!

but then i got an email advertising discounted tickets for select screenings of the new disney flick "frozen" at the fabulous el capitan theater. we love going there for movies, and this was even more awesome because "frozen" doesn't even come out until later in the week. discount + fun movie + exclusive pre-release showing? uh, yes!

i selected an early time so that we could be headed back home before afternoon traffic started, although that didn't mean we didn't hit any going out to hollywood. even on a holiday-light week, the freeways were crowded. 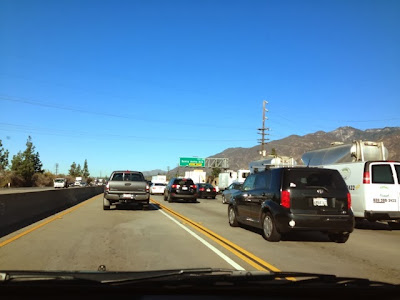 still, we managed to arrive on time. 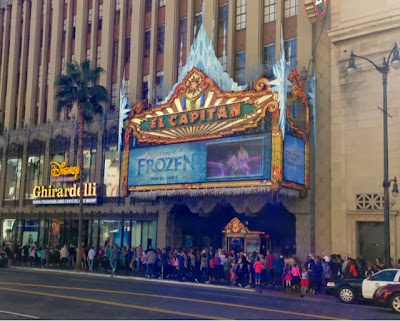 (i actually took that afterwards - hence the crazy crowds outside)

inside, there were lots of themed decorations. 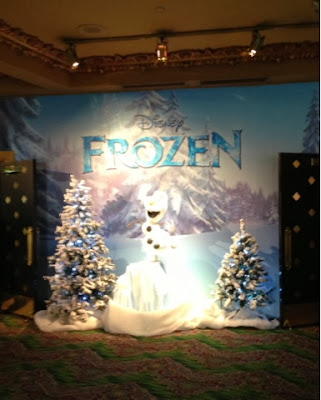 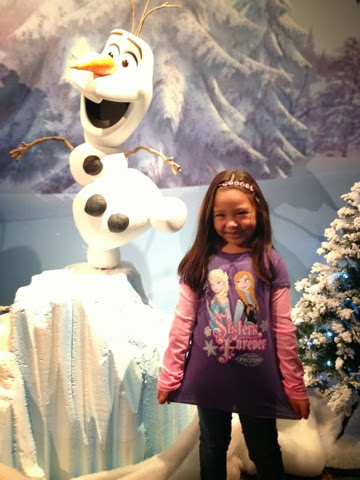 and because of the pre-release, warning signs were posted throughout the theater. 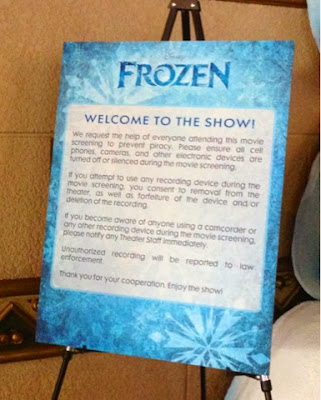 my strategy seemed to have worked out well, because it was pretty easy to find good seats. the bean chose to sit upstairs in the balcony, and she and the teen listened to the live organ music while i ran out to grab some popcorn. 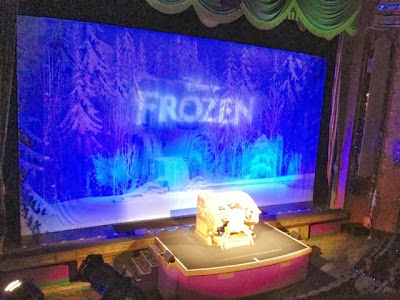 not long after i returned with snacks, the organ disappeared into the floor and the curtain opened to start the preshow. the announcer came out to introduce the movie and invited us to take as many photographs as we wanted.  we sat through a few movie trailers before the screen lifted to reveal two women, a couple of large blocks of ice, and chainsaws. 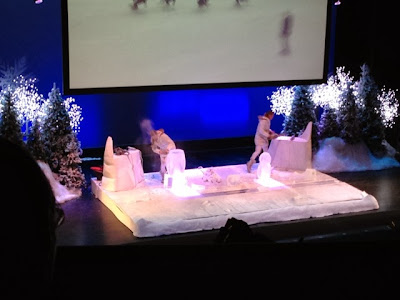 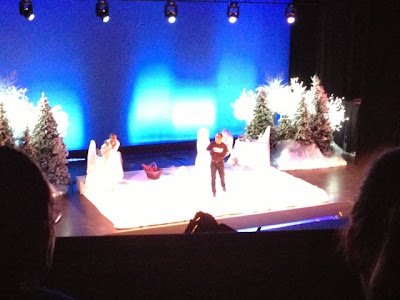 when they were done, this is what was left: 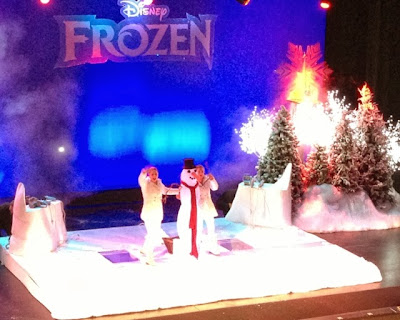 the stars of the movie, anna and elsa, came out to say hello. 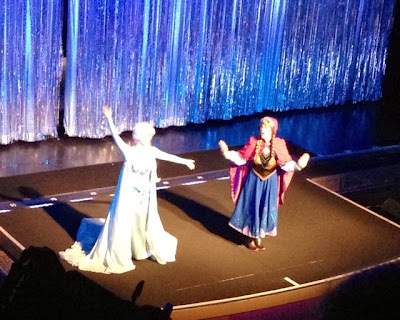 and as they twirled, preened and waved...it started to snow. 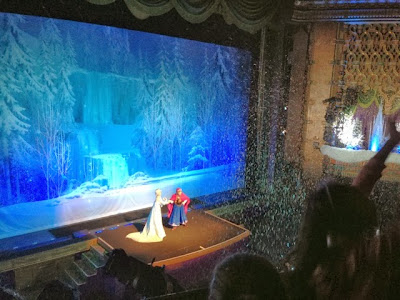 they ran offstage as the lights went down and we were treated to an old-timey mickey mouse short...in 3D. 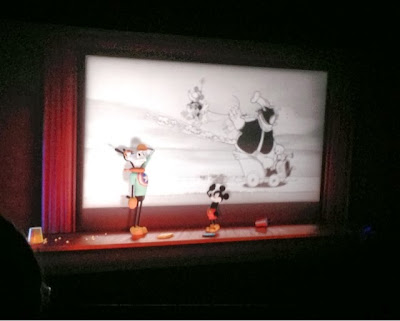 it was right after i snapped that photo that i was approached by an usher who told me in a loud whisper to put my phone away. hmph. so much for "take as many pictures as you like."

but i'm a rule follower, and so in my purse the phone stayed till the movie was over. and i gotta say, for a number of reasons, this is now one of my favorite disney movies. i won't spoil it, but just know that it's really good and YOU MUST SEE IT. also, sit through the credits for a cute little bonus scene. i'll leave it at that.

as we filed out of the theater, we paused to check out the photos that lined the walls of star-studded movie premieres that took place here. 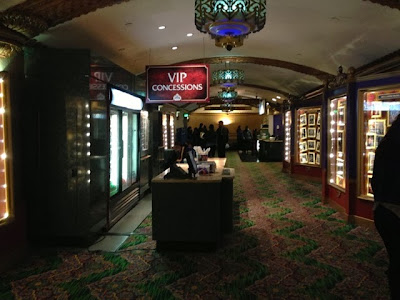 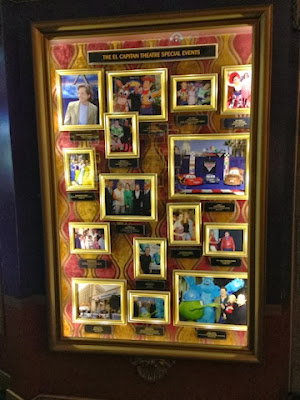 and hey, how convenient. exiting through this door led you right into the adjacent disney studio store/ghirardelli ice cream parlor... 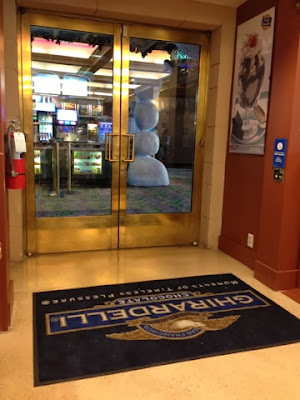 ...where the very first thing you encounter after accepting a complimentary piece of chocolate is this table of movie-themed merchandise. 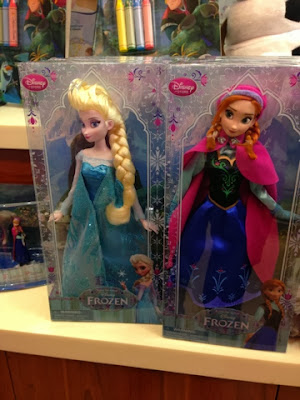 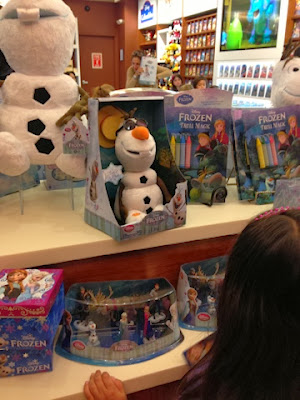 along the back wall is a dazzling display of disney movies on dvd. 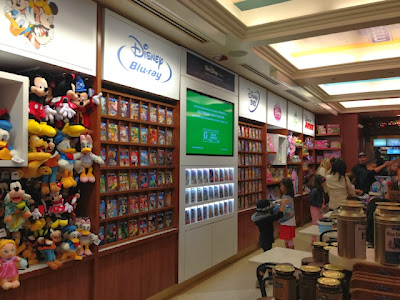 i was a little bummed to see that the soda fountain/restaurant had changed quite a bit since our last visit, now with only ice cream available. this wouldn't normally be an issue, but it was lunchtime and we wanted food. 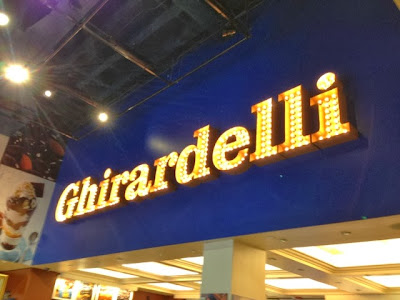 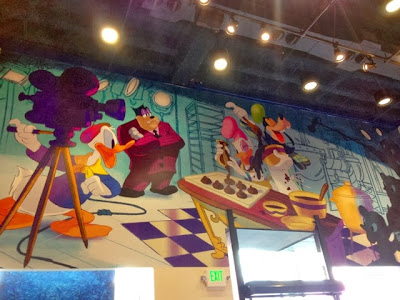 of course, there were lots of treats to buy and take home. this display offered pretty much every kind of ghirardelli chocolate square you can imagine. 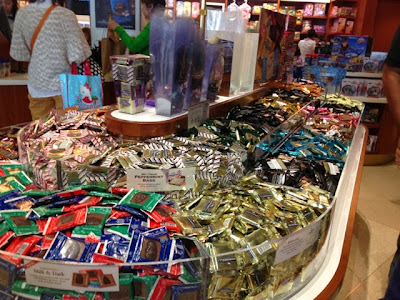 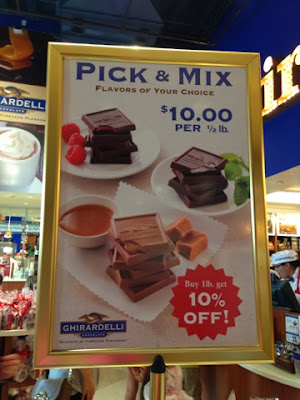 and just outside the front door was this. 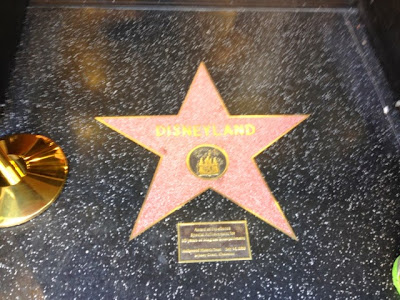 across the street at hollywood & highland, on our way back to the parking structure, we stopped in at crumbs bake shop. while the teen declined a treat, the bean selected a fun-looking birthday cake pop. 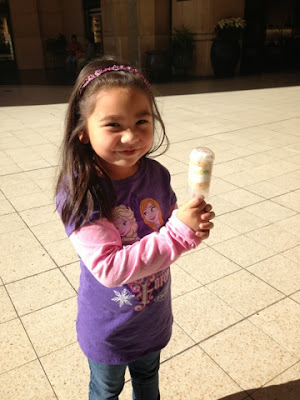 and as for me - well, a poster advertising the crumbs version of a "cronut" had caught my attention. this is a crumbnut: part croissant, part donut, filled with bavarian cream, drizzled with chocolate and ALLLLL delicious. 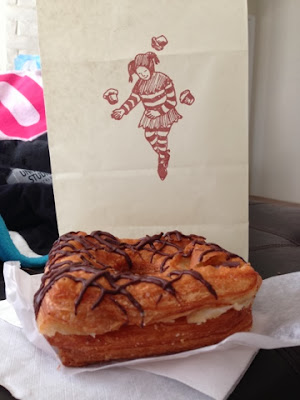