a couple of months ago, i saw a post on social media about a traveling celebration of barbie's 60th anniversary.  the "barbie truck throwback tour" kicked off at the grove with a really cool looking interactive exhibit with all sorts of fun activities and merchandise.  the second i saw the announcement i sent the link to the old lady, who was a huge barbie fan back in the day.  i knew it was something she'd totally love to check out, but she had to work that day and we ended up having to miss it.  so bummed.

and then last week i saw another post that said that the truck was returning to make a stop at the glendale galleria on saturday.  i didn't really know exactly what they were going to have, but i shared the post with the old lady and while it was again on a day she had to work we decided to head on out to glendale after her shift was over and check it out.

it took us a few minutes to figure out exactly where the truck was parked, but we finally found it parked on the sidewalk in front of the galleria, across the street from the americana.  we were able to find a parking spot pretty easily and made our way to the truck, which was largely being ignored by the crowds of shoppers walking by. 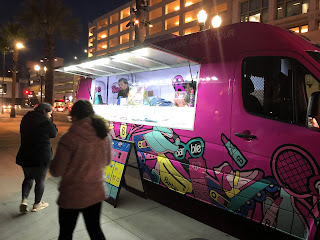 we were a little disappointed to find that the truck was literally just parked there to sell merchandise.  there were no fun activities, no airbrush artist to order custom items from, no nothing aside from two bored-looking staffers inside the truck.  and there was a guy standing right next to the truck with a microphone in hand screaming at the top of his lungs about jesus and how consumerism is evil and shopping is evil and we're all sinners and yadda yadda yadda.  he was super annoying and i definitely wanted to kick him a little.

there actually wasn't much there, but we tried to make the most of our visit and spent a little time looking at what there was to see. 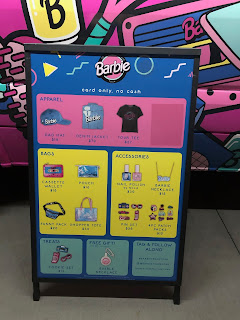 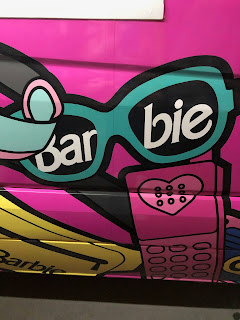 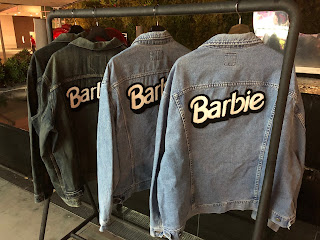 all of the goodies available for sale were displayed in a little window:

i had the old lady pick out a couple of things she liked and then we headed on outta there. 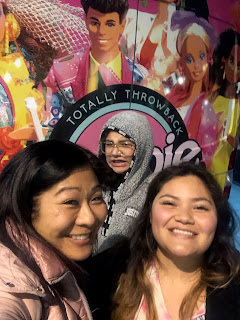 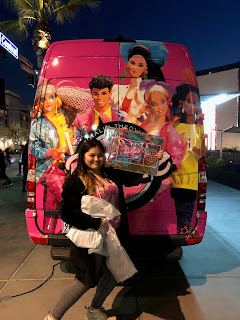 the dude with the microphone was still at it as we went to cross the street and browse through the shops at the americana. 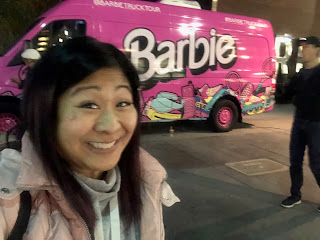 we'd originally planned to go to disneyland for our first visit of 2020, but reports on twitter told us that it was really crowded that evening and so we decided to skip it and just walk around the americana and find something for dinner.  it didn't end up being the evening we'd thought we'd have, but we still had fun and went home with a box of sprinkles cupcakes and cookies for dessert.  and along with that cute tote the old lady modeled in the picture she also picked up a commemorative tee and a matching pouch that i know she'll use for her makeup. 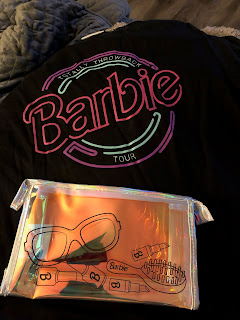 it amuses me that the bean is the exact opposite of her sister, who adored barbie and bratz and american girl dolls.  the bean has never been interested in any of that, which was a little bit of a bummer for me since she was my last chance at bringing home a barbie dream house.  i loved barbie just as much as the old lady had, but i never got the dream house and when the old lady was little i was too broke to afford it.

the only shot i've got left is grandchildren.

Email ThisBlogThis!Share to TwitterShare to FacebookShare to Pinterest
Labels: americana at brand, barbie