a handful of the SFAMily managed to get together over the weekend for a very abbreviated version of our once-annual holiday hoorah.  it was a pretty small group that included a few members of SFAM 2.0 as well, and while we didn't do any gift exchanges like we used to, it was still fun to see each other and share a meal together.  of course, we somehow managed to completely forget to take any group photos and so it's almost like it didn't happen.  but it did!  i swear!

and then afterwards we met up at nearby mitsuwa market to grab some treats that are usually only available in hawaii - mochi donuts by modo. 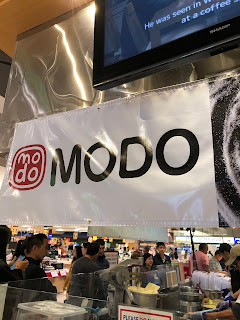 they're doing a temporary pop-up shop here that started a few months ago and i think it was actually supposed to finish up at the end of 2019, but lucky for us they extended their stay.  they're really popular and there was already a line when we arrived.  this was totally okay though, because it gave us more time to chat as we waited.

we were all amused at this sign, which was apparently quite a thorn in mitsuwa's side. 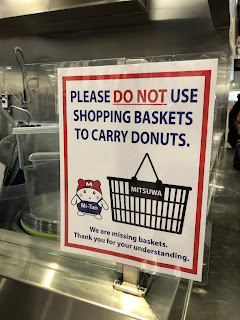 i mean...it's not easy to juggle two dozen fresh donuts (which is the per-person limit) in open containers while still trying to do some grocery shopping. 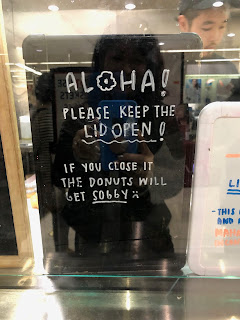 it was pretty mesmerizing to watch the guy pour the dough into this contraption that he then used to dispense perfect little rings of dough bubbles into the hot oil.


because they were selling these things as fast as they could make them, they were even more fresh and delicious here than they were in waikiki. 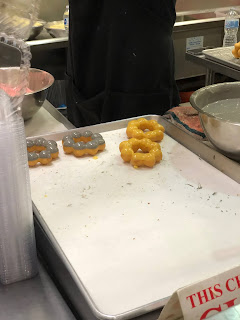 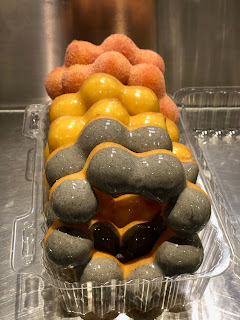 we exercised some restraint and went with just half a dozen - two of each flavor, which for that day were black sesame, mango and strawberry sugar.  the bean loved the mango ones, while i was pretty partial to the strawberry.  and we were pretty neutral on the black sesame - it wasn't our favorite flavor, but it was still pretty tasty.  and the texture of that mochi donut...oh, so yummy.  let's just say that by the time we got home only one donut had survived the trip.  heh.

and then yesterday i met up with dailygluttony and lilcee to cash in a groupon we'd bought together, for spa access and a massage at the langham hotel in pasadena.  when i pulled in, i noticed a whole lot of security milling about and as i left the car with the valet and headed towards the lobby i realized why: 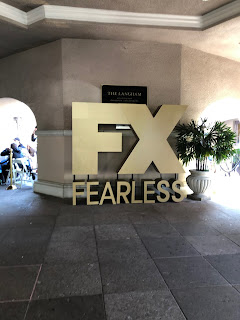 the television critics association was holding their winter press tour at the hotel, and it turned out that we'd just missed ABC's turn by a day.  bummer.  still, we were all excited at the prospect of possibly seeing some celebrities at some point during our day at the langham. 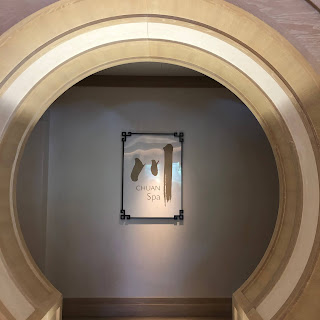 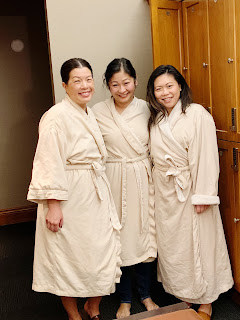 that hour goes by SO fast.  man.  but my massage tech was particularly good and while i kind of wanted to cry from parts of my treatment, i felt great afterwards.  she'd commented on how tight my muscles were and that she was finding lots of knots in my back and shoulders, and even though i was scheduled for a swedish massage - light and relaxing - i ended up with more of a deep tissue massage that helped loosen a lot of that tension.  she'd also gotten me to throw in a 10-minute reflexology upgrade, which was pretty fabulous.

we decided to stay at the hotel for lunch, knowing that finding parking somewhere else in the pasadena area would likely be difficult, and as we made our way to the restaurant lilcee whispered "i just spotted nick offerman!"  i'm going to go ahead and admit that i likely saw him but hadn't recognized him because i've not seen anything he's been in, but i did at least know that he's married to megan mullally from "will and grace."

it was a lovely afternoon, and i'm hoping that maybe i can snag a couple more of those groupons and take the old lady on one of her mondays off.  after all, neither of us has ever been known to turn down a spa day.  duh.
at January 10, 2020

Email ThisBlogThis!Share to TwitterShare to FacebookShare to Pinterest
Labels: donuts are good, dreaming of hawaii, food is better with friends, wan is a spa whore