counting down the last few days of 2019

the bean goes back to school today after a little more than two weeks off.  it's kind of a bummer because it's been lovely to be able to sleep in/stay up late, not worry about the routine, driving from one activity to the next, yada yada yada.  but like i reminded her, the sooner she goes back the closer we get to the next break.

we managed to squeeze in a dim sum date with some of my cousins after christmas, which is always a good time.  along with all of the usual dim sum treats i was excited to find what my friend weezermonkey dubbed the "smurf house" a long time ago - a little cup of almond milk tea topped with a lovely layer of puff pastry. 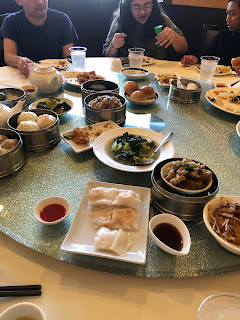 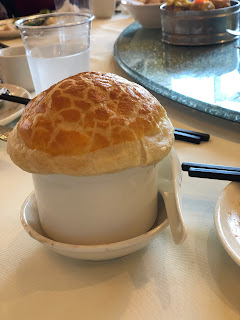 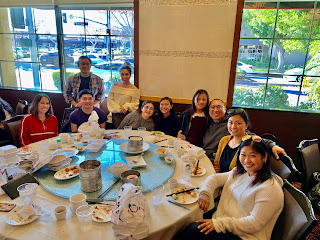 and afterwards a few of us headed over to a local boba shop to satisfy the bean's craving. 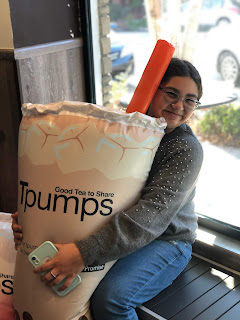 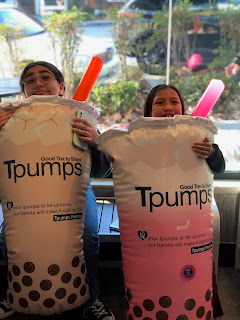 while we were enjoying cousin time (and the old lady was slaving away at work), the boys headed up to the mountains for some snowboarding fun. 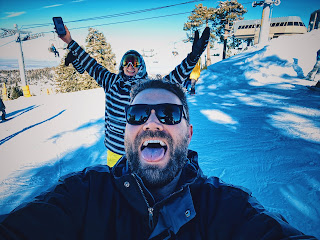 with a new year's eve party to throw, we decided to pack up the christmas decor a little earlier than usual.  it's always a bummer to put it all away, but we did have it up for a good amount of time and besides, christmas was over anyway.  still...bleh. 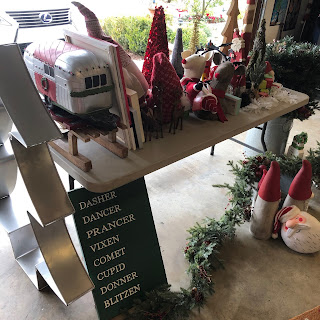 and look!  our family christmas ornament collection.  it was while we were putting up the tree that i realized that we'd skipped buying one in 2009.  lucky for me, i found it on eBay and i'll just have to pull out a picture from that year's family photos to put in it one of these days. 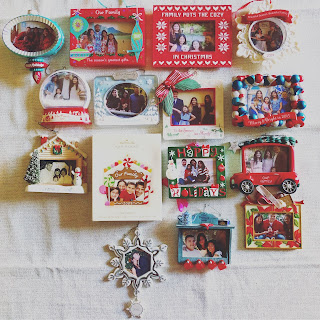 the only good part about putting christmas away was finally being able to put out the new welcome mat i'd been saving for weeks: 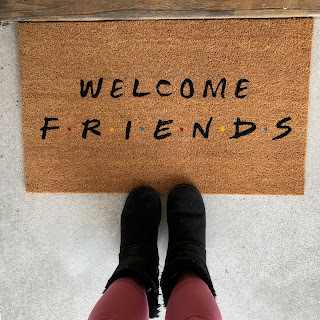 the old lady's BFF gifted us with this cute set of wine glasses that go with that welcome mat pretty well. 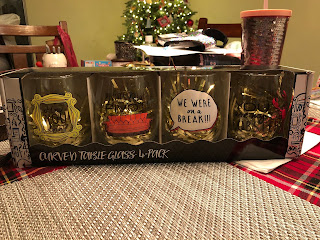 so the only actual schoolwork that the bean was required to do over the break was to finish up a book report that she'd been dragging her feet over.  and to her credit, she'd actually completed it well before christmas day.  except that rather than placing it safely in her backpack and zipping it closed like i'd suggested, she...didn't.  and teddy being teddy (crazy chewing puppy mode that i can't wait to see end), he got ahold of the ziploc baggie she'd put it in and dragged it into the back yard to destroy.  the report was in the form of a giant jigsaw puzzle made out of poster board with her hand-drawn illustrations and report text on the pieces, and while she attempted to repair the pieces that had the most damage, she ended up having to just suck it up and redo the entire thing.  and because teddy is a lunatic, he still managed to get ahold of a few of the new pieces she'd done.  so when she finally buckled down and put all of her focus on just powering through and getting it all done, the hub created a workspace for her that teddy couldn't get into: 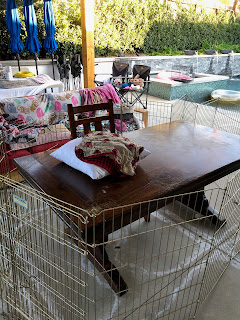 she finished it just in time for us to start getting ready for the party.  we were having her two BFFs and their families over - the same group we'd done friendsgiving with just the month before.  the hub had gone to costco to grab a couple of tower heaters to use in the backyard to make sure that we'd all stay warm while enjoying dinner and waiting for the ball to drop.  i'd ordered some fun (hopefully non-cheesy) decorations and party favors, which everyone helped me put up. 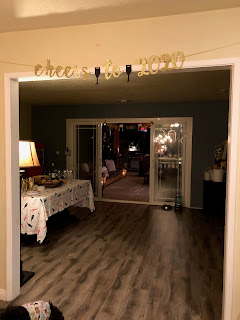 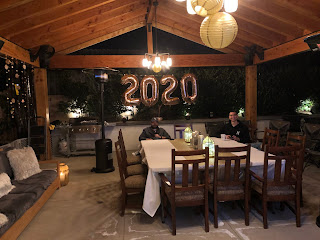 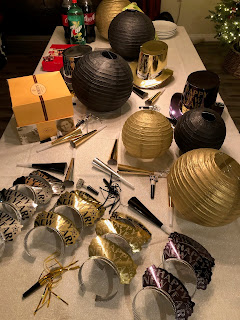 teddy and cocoa both had festive outfits for the occasion: 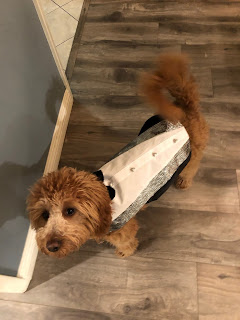 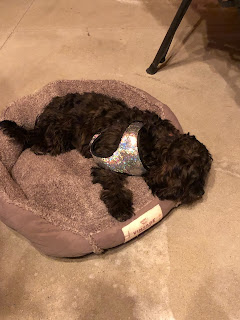 i put together another one of those charcuterie boards: 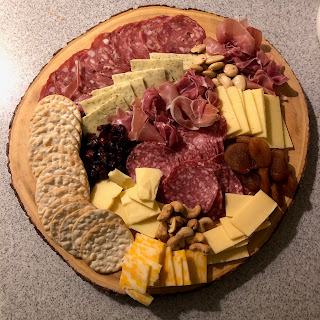 and the hub fired up the barbecue to grill up some steaks, salmon and veggies. 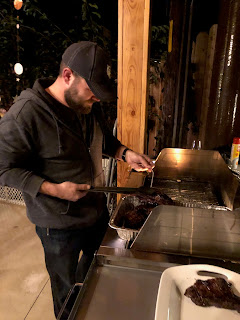 one of our many desserts was this whole tres leches cake from porto's: 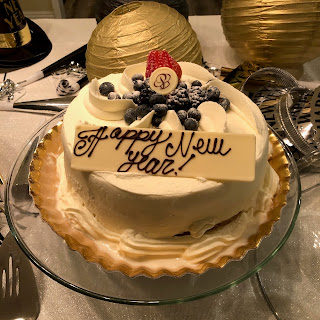 and it was a fun and laid back evening of food, wine, chatter and laughter. 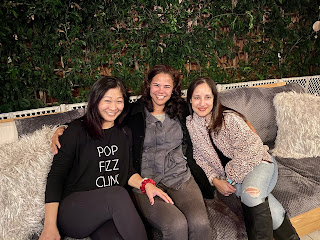 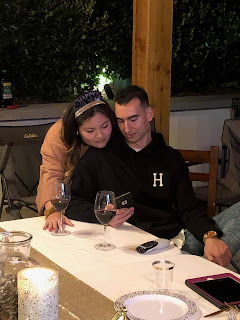 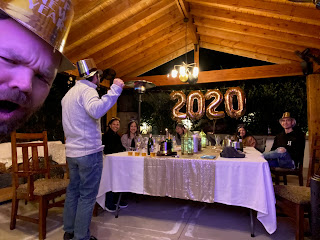 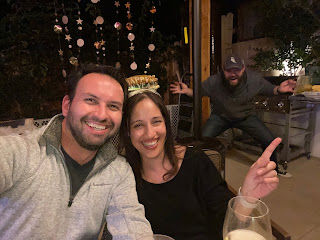 we gathered everyone together for group photos that we'd forgotten to do at friendsgiving: 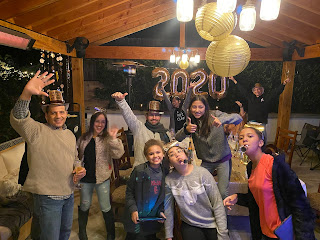 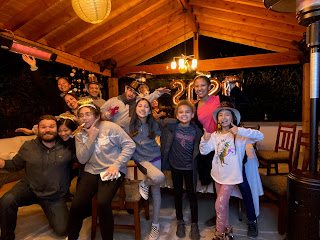 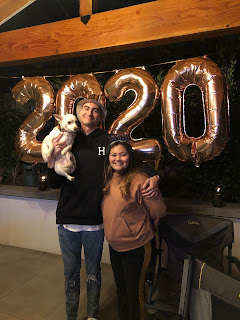 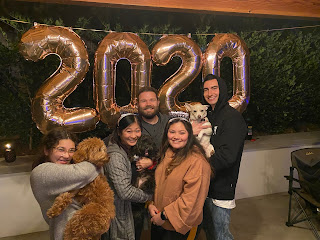 the old lady had been doing her best to finish binge watching "friends" before netflix took it out of their rotation, which was scheduled for january 1st.  she finished the last few episodes well before midnight, and then out of curiosity after we finished those group photos i tried to pull it up on my phone and found this:

it was like 12:10.  netflix was not playing around when they said the episodes would be gone.  man.