the word "scrunchie" has lost all meaning

i love that scrunchies are a thing again.  although let's face it...were they ever really NOT a thing?

well, yeah, okay, i guess there was a pretty big chunk of time when it was definitely not cool to wear a scrunchie unless you were in a costume or something.  heh.  and nowadays the kids are wearing them on their wrists more than in their hair and there are different meanings and they've turned it into something all weird and possibly pearl-clutchy and blah blah blah.  whatever.

and so there are all sorts of tutorials out there to show you how to DIY your own scrunchies using fabric scraps and regular sewing elastic.  i've made a few of them, because i'm a friggin' lemming like that.  but i don't really like the stretch factor of regular elastic in scrunchies and really wanted to figure out how to use an actual hair tie instead.  there are a couple of tutorials out there, but i didn't really like the process used and figured there had to be another way.

there's a youtube video circulating amongst the facebook sewing groups that features an easy way to sew up the fabric part of the scrunchie using a technique called the "burrito roll."  i learned how to burrito roll awhile ago while making lined tank-style dresses, and it's pretty easy once you get the hang of it.  and in one of those facebook pages someone mentioned that after some trial and error, they'd figured out how to combine both the hair tie and the burrito roll method to create their scrunchies.  she posted a couple of videos, but for some reason the page's admin deleted them before i had time to watch them and so i ended up having to figure it out for myself.

to be perfectly honest, i'm really posting this for myself because once i got it to work i was afraid i would forget how to do it.  heh.  i took step-by-step pictures as best as i could with my own two hands, and so if you're interested in making your own scrunchies here's my process (but make sure that you watch that video first because none of this will make sense if you don't):

these are the hair ties i like best.  they're nice and stretchy and they're made from a continuous piece of fabric so they're seamless and there isn't a spot that two ends have been glued together.  this way i know it won't ever snap apart inside the scrunchie, rendering it completely useless unless you want to pick the seam open and insert a new hair tie. 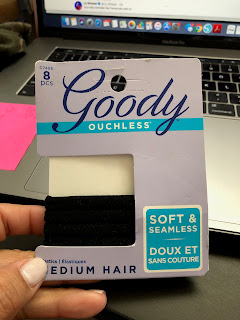 i'd found some really cute "friends" themed fabric at joann's, but most of it is cotton woven which i don't typically use for clothing.  i'm also thinking it'll make for a cute little zipper pouch, one of these days.  anyway, the piece i use for scrunchies measures 5" x 20". 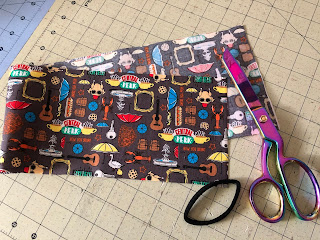 with right sides facing, sew up the short end to create a loop. 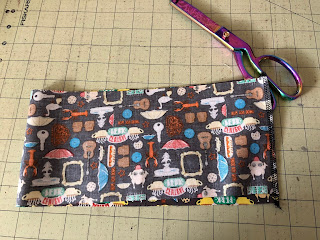 here's where the burrito roll comes in - pick up the top layer of the loop and fold it together to meet in the middle. 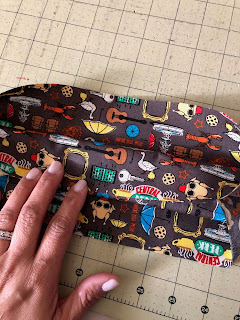 then you pick up that middle "burrito filling" and stick your hair tie in it, like this: 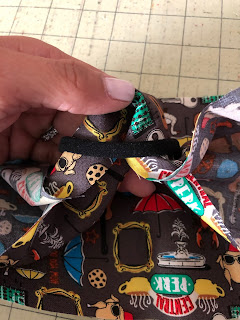 now you're going to put the outer "tortilla" layer together, still with right sides facing, but you want to make sure half of your hair tie stays outside of the burrito. 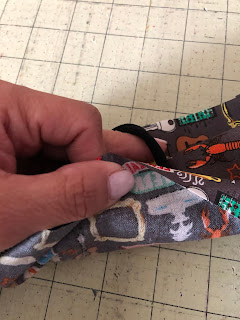 see how i'm holding the tortilla together, inside the hair tie?  that's where you want to do your sewing. 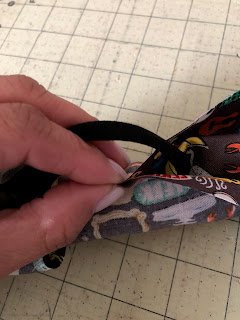 take the burrito to your machine and place that section of the tortilla that's inside the hair tie under your needle.  make sure that you keep the burrito filling layer far away from the needle so that it doesn't get sewn in with the tortilla.  again - if you haven't watched that video this isn't going to make a lick of sense, so go back and watch it a couple more times if you need to! 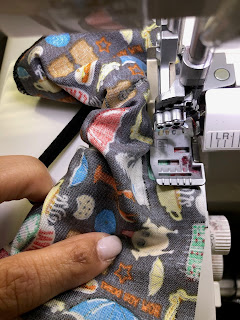 this looks like a hot mess, but i swear it makes sense while you're doing it.  i also found that i could pull the hair tie to the other side to make it easier to sew without catching it under the needle.  anyway, you want to sew down that raw edge, pulling the burrito filling out as you go, all the way down, still making sure to keep it inside so that it also doesn't get caught under the needle. 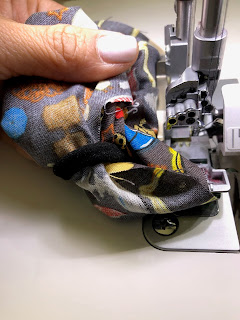 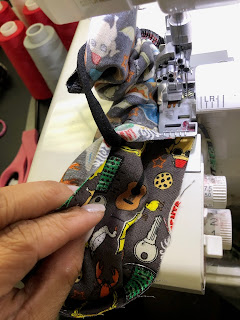 once you get all the way down to where you started sewing, make sure to leave about an inch or so open so that you have room for turning it inside out. 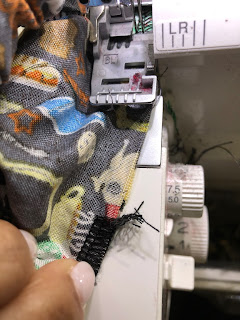 this is what it'll look like when you take it off of the machine. 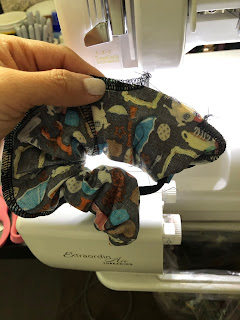 now you want to reach inside and grab the burrito filling and pull it out, basically turning the whole thing inside out.  you can use your fingers, but i have this fun little tool that looks like pliers that works perfectly for this sort of task. 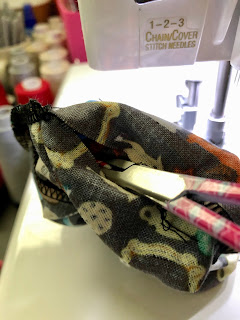 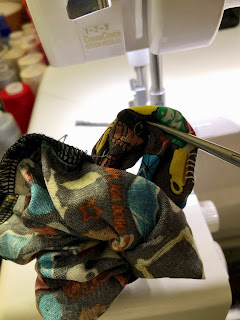 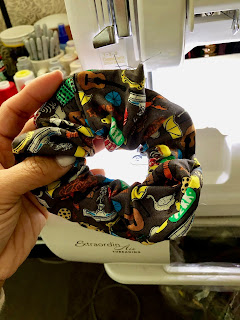 you're not completely done yet though, because you want to close up that hole that you left for turning. 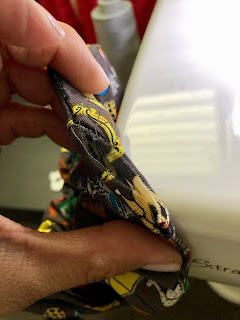 some people like to tuck in the raw edge and use their sewing machine to topstitch it closed, some like to hand sew it, and others will use a little dab of fabric glue to close it up.  use whatever method you like best.  and now you have fun new scrunchies with a "good" hair tie inside to hold that ponytail that won't snap if you pull it too hard! 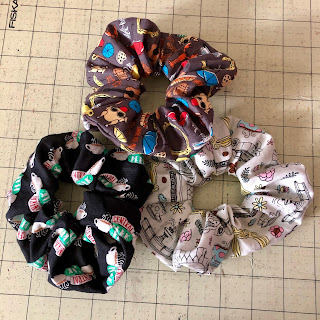