working on her (dance) fitness

at the bean's school, junior high kids have several options for earning their PE credits each year.  they can either take a regular PE class, join one of the school's sports teams, play a sport outside of school that has regular practices and games, or be part of the show choir.  girls also have the option of taking a "dance fitness" class - which i think is stupid because there are tons of boys who like to dance and they should be able to do this too, but christian school.  sigh.

the show choir director is also the drama coach, who runs the annual junior high musical.  the bean was in show choir for the first trimester, but because cheer practices and competitions conflicted with rehearsals for the musical she ended up moving into the dance fitness class for the rest of the school year.  because a lot of her friends were in it and told her it was a lot of fun, she was totally okay with the change.  snd when she found out that the group performs at halftime during a clippers game, she was super excited.  once we got the details about the performance, the hub snagged tickets for us and the old lady and her special friend so we could see her on the floor at staples center and enjoy a fun night out in the process.

the kids got to leave school right after lunchtime to get down to staples center for a mandatory rehearsal, and booked a party bus for the excursion.  then they were to have dinner somewhere at l.a. live before returning to the venue to take their seats and wait for their performance time.  as for the rest of us, we made a pre-game dinner reservation at shaquille's and headed down together in the hub's truck. 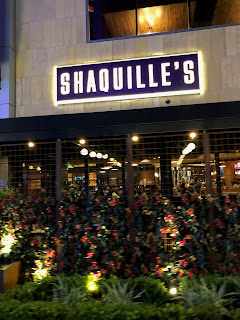 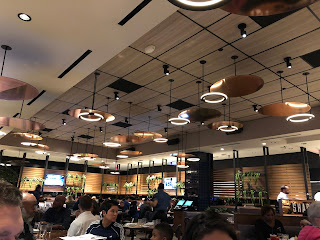 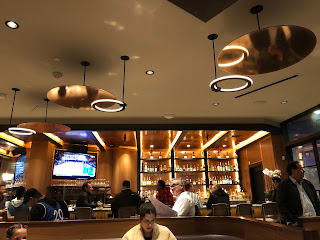 the restaurant was full of clippers fans, relaxing and enjoying the southern-influenced menu and doing some pre-gaming at the bar.  we were seated at a table right in the middle of all the action, and checked out the menu once we were settled in. 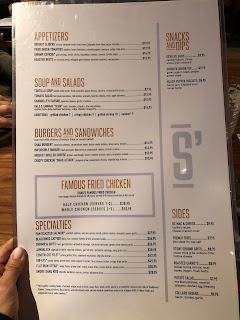 i decided to have a cocktail, because why not?  i chose the "celebration" - prosecco, cucumber, st. germain's and fresh lemon juice.  very tasty. 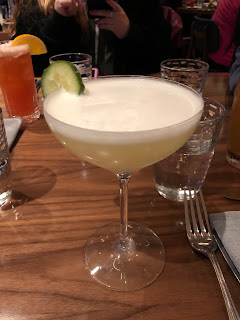 the guys shared the deviled eggs for their appetizer, while the old lady and i happily slathered our black pepper biscuits with bacon jam and honey butter. 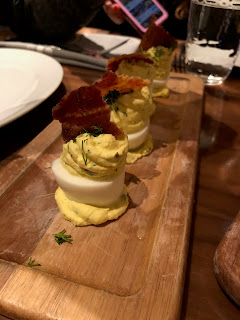 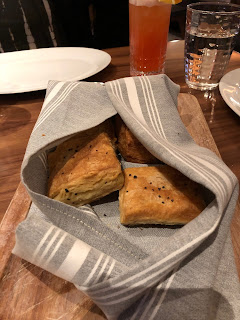 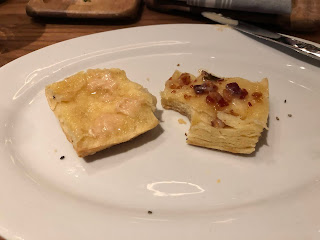 the fried chicken was the star of the show, although the hub said the jambalaya was pretty good too. 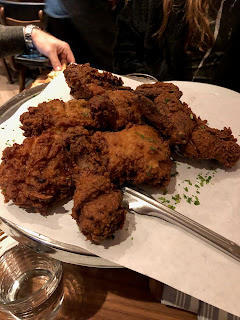 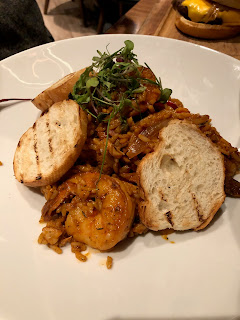 by the time we were done it was time to head across the street into staples center. 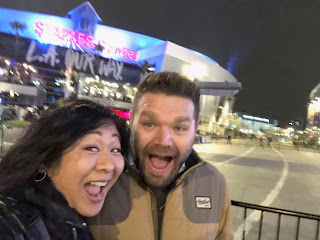 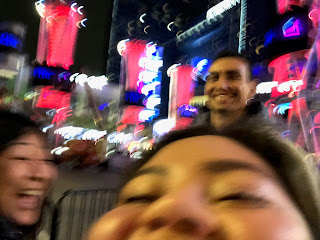 the hub had secured some really good seats for us, right behind the visiting team's bench. 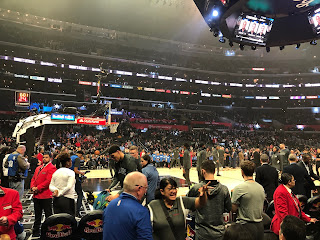 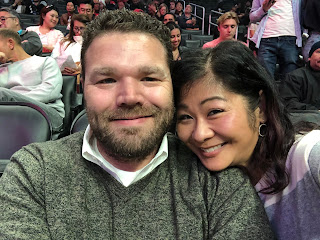 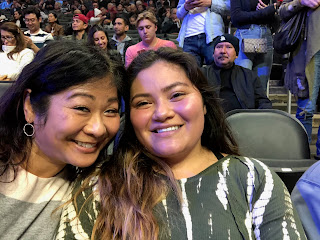 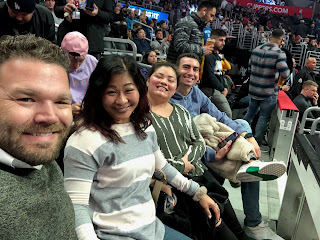 i'd asked the bean where they were sitting, and when we were in our seats we looked up to see if we could find her.  she was up there in section 328: 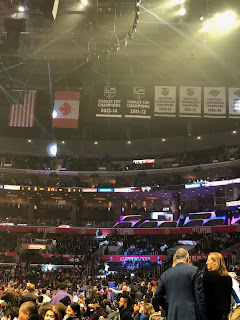 and it was right after that when i got a text from the bean:  "did you see me perform?  they changed us from halftime to preshow."  GAH.  we'd likely missed them by mere minutes, as we sat across the street just chilling, with no idea that they'd been bumped.  we were so bummed, because after all that was the whole reason we were even there in the first place.  ugh.

luckily, i remembered that one of my mom friends was at the game as well because her daughter is in dance fitness too.  i texted her to see if she might have grabbed video of their performance and was really relieved when she said "yes."  she'd filmed the big screen and it turns out that the kids were amongst a bigger group of zumba enthusiasts who were made up of mostly much older folks.  they'd all learned the same routine and worked it on the floor all together, and i managed to catch a glimpse of the bean a couple of times throughout the video.  she's at the top right corner of the screen here:

as we sat and watched the teams warm up, i noticed that there was a lot of k-pop music being played and the old lady nudged me and said "mom...it's korean heritage night."  i knew the bean was loving hearing all of her favorite songs, especially her beloved BTS. 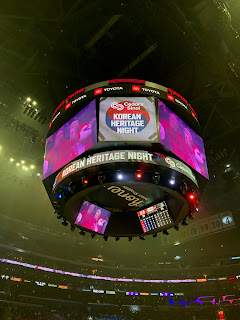 the national anthem was sung by a korean actress, the teams were introduced and then the game started. 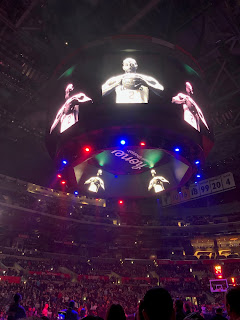 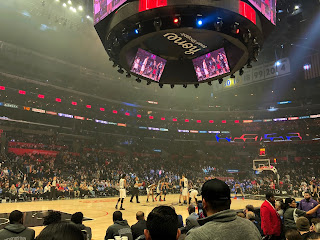 it was fun to be in those seats, alternating between watching the game and the fantastic peoplewatching around us.  the clippers were playing the orlando magic, who the hub said wasn't playing too well this season and which also explained why the venue wasn't full, nor were there any celebrities to gawk at.  well, we did have one minor sighting - tracey ullman, who was seated right in front of us. 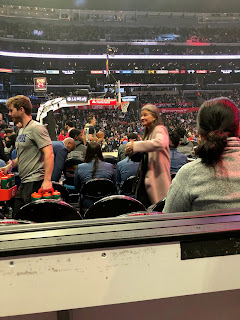 and we realized that the girls had been bumped out of their halftime slot in favor of this k-pop dude whose name i don't even remember. 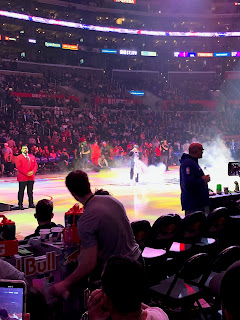 the kids enjoyed a drink while he performed. 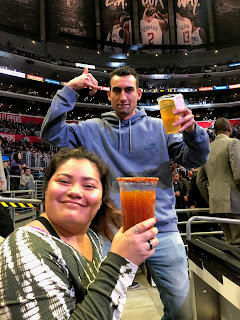 and the clippers' mascot came over to wave at us and heckle one of the servers for the section in front of us. 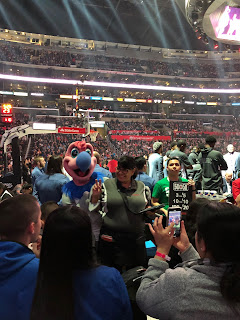 we hung out through the third quarter, and then we bounced outta there.  we couldn't take the bean with us because she had to ride back on the party bus with her group, not to mention her backpack was locked up in the gym and we couldn't get in there without the coach anyway. 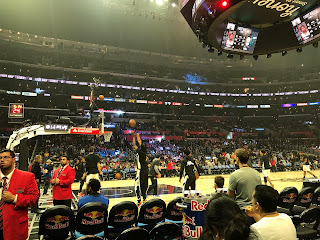 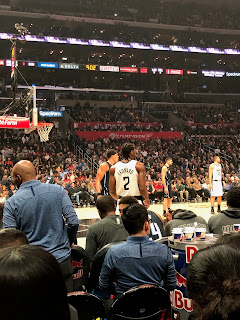 it was an easy drive home despite the rain that had rolled in while we were inside staples center, and the hub headed back out to school to pick up the bean when they got back about an hour after we'd gotten home.  she was pretty wiped out and went straight to bed.  thank goodness they have a teacher inservice day today and she gets to sleep in, especially since the cold she's been fighting off seems to have caught a second wind amongst all of yesterday's excitement.

next up...vegas for cheer competition next week!  the fun never stops.

Email ThisBlogThis!Share to TwitterShare to FacebookShare to Pinterest
Labels: clippers, staples center, the bean is a dancer