a little rest and relaxation

the next morning, the hub and i decided to take a quick walk to the little general store to pick up some provisions for the next couple of days. it was actually really well stocked, with groceries and fishing and camping gear plus a full liquor section and even some colorado souvenirs.  i thought i took more pictures inside, but this is the only one i found on my camera roll.  oops. 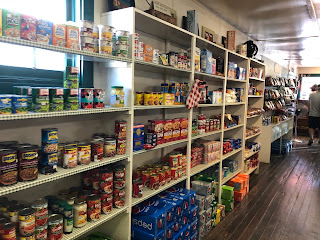 after we got back and unpacked the bags we'd brought back, the bean was up and ready for some lunch.  while the burritos we'd gotten from that breakfast basket were actually fairly decent for frozen grub, there was a little cafe just across the street from the general store.  and so we took another quick little walk to the bla bla blah cafe. 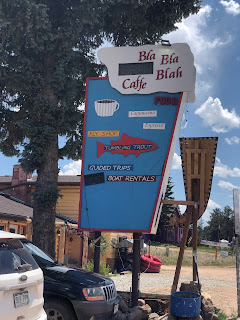 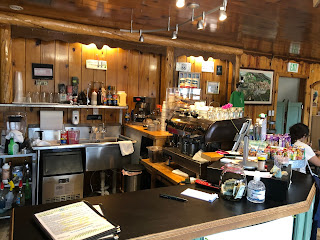 the food was nothing special, but it was decent and fairly priced.  we were the only ones there, so we were done pretty quickly and then we were on our way back to the cabin.  it was a perfect day, just warm enough and really pretty out. 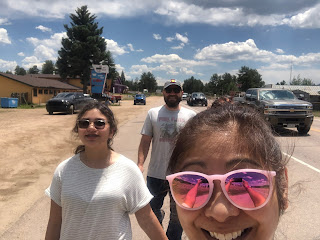 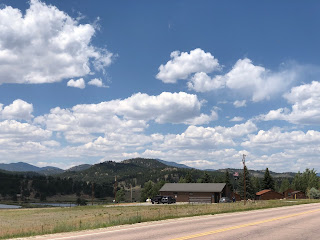 the hub decided to head out to do a little fly fishing while the bean and i hung out in the cabin with the dogs, who didn't seem to want to let him go. 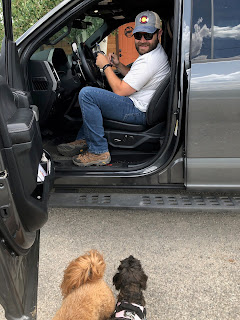 while he was gone, we walked a few loops around the property with the dogs - it was the tail end of the step challenge we were in with the old lady and her special friend, and we needed to get as many steps in as we could.  having crossed into mountain time, we'd lost an hour of the day, giving them a great advantage.  i was already pacing back and forth inside the cabin at night clear till midnight, getting my number as high as i could but the special friend always managed to beat me with that extra hour he had.  ugh.  anyway, we eyed the cute outdoor barbecue area that we pretty much had to ourselves since we were the only guests at the time. 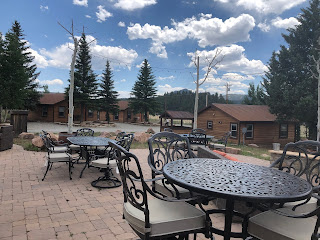 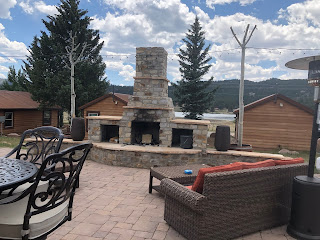 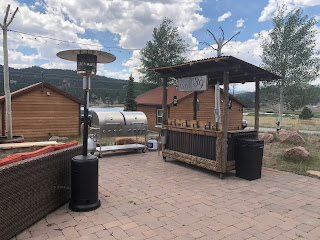 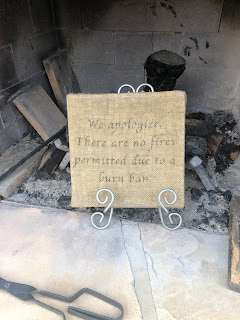 and so we decided to head back out to woodland park to hit up the supermarket for supplies to make dinner that night on the grill.  on our way back we swung into the drive thru at sonic for some treats, where the bean went big and ordered up a big ass chocolate shake. 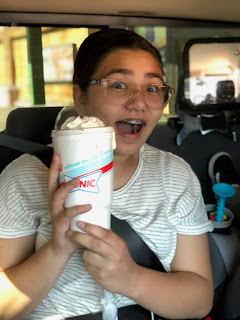 while at the store, i was pretty stoked to find some yeast and bread flour.  figures that i'd have to go all the way to colorado to find this stuff.  it's like gold, man. 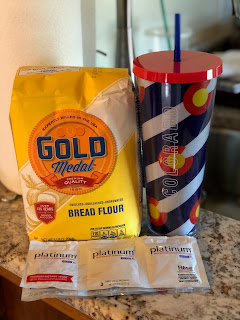 dinner was delicious - grilled steaks with asparagus on the side, which is kind of our default meal when we can't think of anything else and need something simple.  and when we got back to the cabin after cleaning up, the lady from the front office delivered our evening cookie plate.  this time they were chocolate chip, still warm from the oven which made the cabin smell really good. 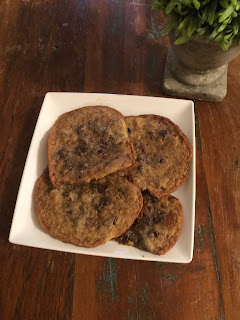 it was a nice way to end the day.  we only had one full day left before it was time to pack up and head home, and the hub was pretty excited for the next day during which he'd booked a fly fishing guide to take him to a great spot along the 11-mile canyon.  i mean, it's definitely not my thing, but he really enjoys it and i'm glad he was able to carve out some time for himself.

besides, i had one more day of the step challenge left and i wanted to get an early start and get as many steps as i could.  i was running about 4,000 steps behind the special friend and i knew the chances of me winning were pretty low...but i wasn't going down without a fight.  if he was gonna win the grand prize, i was gonna make him work for it.

Email ThisBlogThis!Share to TwitterShare to FacebookShare to Pinterest
Labels: colorado