taking the dogs out to lunch

as we made our way down the mountain after our pike's peak outing, we decided to try a spot that was recommended by our resort for lunch.  with a name like pub dog, we knew it would be perfect for us since we had teddy and cocoa with us. 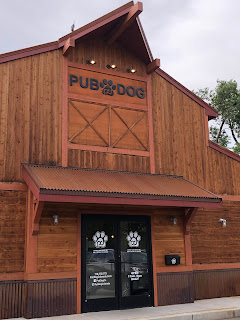 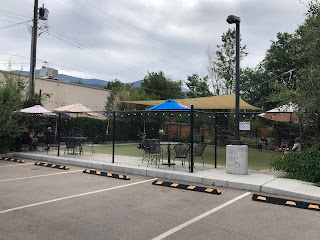 according to their website, during non-covid times it's one of the few places you can actually dine inside with your pets.  and they even offer housemade dog food on their menu. 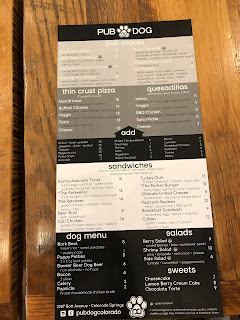 while i finished ordering food (both dog and human), the hub and the bean headed outside to take the dogs to the off-leash fenced in play area.  she was so sad to see that she wasn't old enough to go inside. 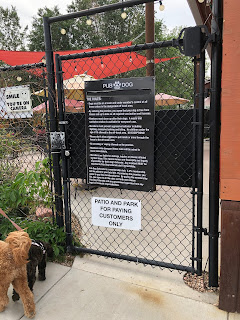 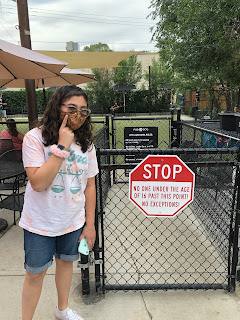 it's funny - normally, cocoa is a feisty little thing...fearless, brave, ready to jump into action.  and teddy is typically a little more cautious, hesitant - pretty much the opposite.  but when they're at a dog park, they switch personalities.  teddy is excited, friendly, happy to play with the other dogs while cocoa tends to keep to herself, sniffing along the perimeter and preferring to say hello to the humans present rather than her new canine companions. 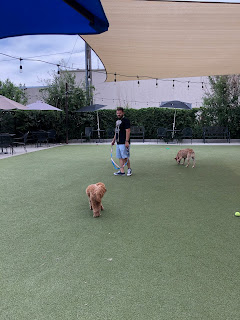 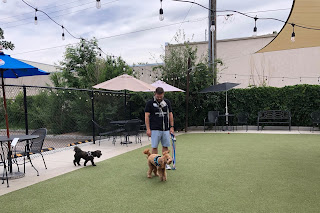 still, they had a good time with their brief period of freedom.  they scampered around the area, tails wagging, burning off excess energy.  and then when the food came, they happily came over to check it out.  this was good, because for some reason whenever we're away from home neither of them is really very interested in eating.  teddy in particular seems to go on a hunger strike, eating only if i hand feed him and even then, not a lot.  and so i hoped that their "bark bowl," topped with a "puppy patty" would be enticing enough to get them to eat.  it was brown rice with cooked sweet potato topped with an all beef patty. 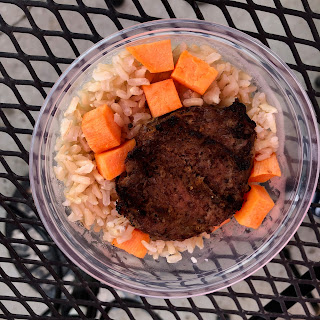 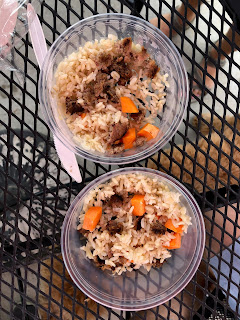 as i'd expected, they gobbled down the pieces of that patty and sniffed at the rest.  i think they both tried some of the rice and a piece of sweet potato, but it wasn't interesting enough for them to finish off. 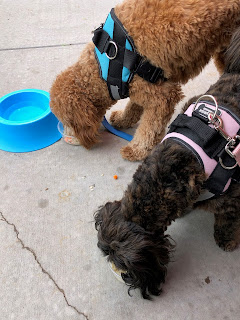 they had a little more playtime before we packed it up and headed back to the resort.  while teddy happily curled up in the backseat with the bean, cocoa hopped into the hub's lap and enjoyed the feeling of the wind rushing past her face as she poked her head out of the window. 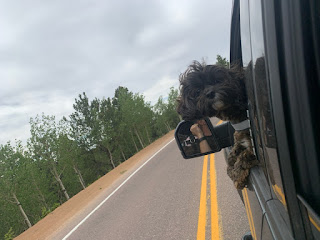 i don't speak dog (as much as i wish i did), but i'd be willing to bet that if we asked them what their favorite part of the whole trip was, it would be this outing.  and as i settled the bill on our way out, i picked up a fun zip-up hoodie to take back home to stevie.  i wish there was a place like this at home. it would totally be a regular outing for us.
at July 13, 2020