sing us a song, you're the piano man

when i met nanette oh-so-many years ago, i knew instantly that she was the kind of person i'd count as one of my friends forever.  she's cheerful, hilarious, genuinely kind and thoughtful - plus, she's half-filipina so we're probably related in some way down the line somewhere.  it's always a good time when nanette is around, and so when she invited me to join in her birthday celebration for her 45th i was happy to attend.

the invitation mentioned a "virtual piano bar," which was interesting.  i was definitely intrigued, and i had to laugh when i saw it because although i wasn't 100% sure what we were in for, it was just so very nanette - something new and creative, a fun novelty, and definitely bound to be a good time.  plus she mentioned mexican food and sweets...and you just can't go wrong with those.

lilcee and i carpooled down to the party, and of course even though it was the dead of summer it happened to be one of those rare chilly evenings.  this meant that i wasn't going to be able to bust out one of my cute little dresses but instead wore jeans for the first time in months.  oh well.

because of the recent surge in covid cases at the time, she had decided to keep the party outside in her back yard.  it was super cute and cozy back there, and we made ourselves plates of tacos and rice and grabbed a seat at the table to enjoy our food together.  she'd brought in food from local favorite tito's tacos, and i must've been really hungry because i don't have any pictures to share with you - but trust me, they were delish.

she had the tv set up outside and connected to her laptop, and when we'd gotten our fill of those tacos we rearranged our chairs and got ourselves ready for the virtual piano bar.  once justin appeared onscreen, there were lots of whispered jokes about strippers and ripping t-shirts off and schoolgirl giggling, but it was a PG-rated party and all clothing stayed in place.  heh. 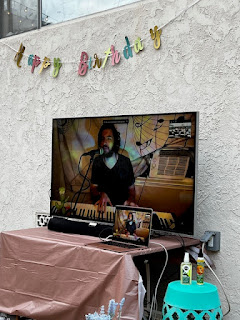 he had a list of songs for us to pick from, and there were lots of 90s/2000s hits with some harry styles and elton john and beatles mixed in.  everyone took turns requesting songs, and he would play them and we would sing along and i'm going to go ahead and admit that i wasn't totally sold on it when we started, but by the end of the hour i realized that i'd been thoroughly entertained and had a great time.

we all sang the birthday song to nanette - yes, justin too - and there were cake pops for everyone. 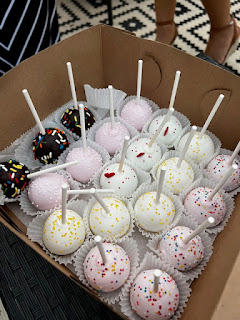 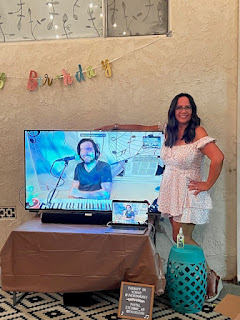 it was a really fun night spent with old friends and a few new (to us) ones, and i was so glad i was able to go. 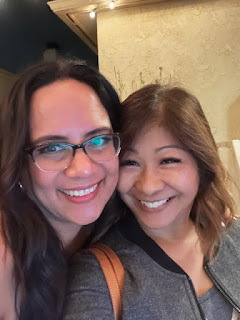 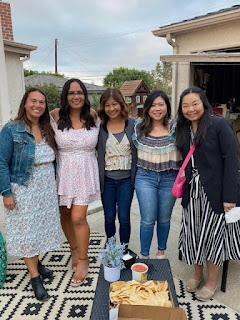