makin' treats for the teen

i didn't tell my friend 10yt this, but for last week's baby shower i'd had every intention of surprising the group with some yummy red velvet cake balls. but then i was distracted with god-knows-what, and the box of red velvet cake mix sat on the counter, untouched.

the teen caught sight of it and said "ooooh, are you making these?" and when i told her i'd wanted to make them for the shower but ran out of time, she beamed and said "well, you know what next monday is, riiiiiiight?"

and that is how i put myself on the hook to churn out a batch of those delicious little treats. we were going to celebrate her birthday along with mother's day, since she'd be around despite it being her week with her dad, so i figured it would make a nice addition to the dessert line-up. not to mention, each batch yields close to 50 freaking cake balls, so we'd be needing some help gobbling them up. tough job, huh?

since it was a special birthday treat, i thought i'd dress 'em up a bit. i decided to give bakerella's cupcake bites a shot - which i'd wanted to try for quite a while, and already had the candy mold on hand. i considered making them "pops," since i also had a bag of lollipop sticks, but figured it would be a pain in the ass to display/serve them.

look at the gorgeous (although i could swear i read somewhere that red food dye comes from beetle pee, or some gross shit like that) color of the cake batter: 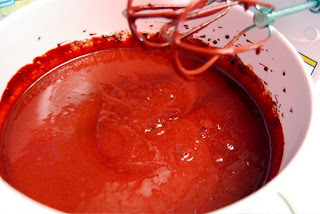 it baked up quickly and easily, and i set it out to cool completely. 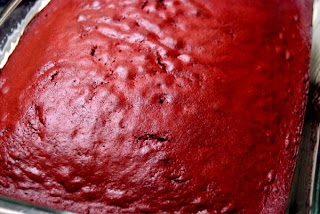 i crumbled it all up, giving myself a devilish looking manicure in the process, and ended up with a big bowl of what almost looked like ground beef. ew. 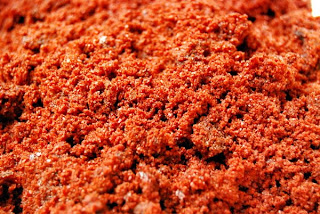 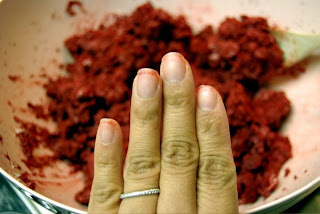 i scooped out the frosting and dropped it in, and got to work on mixing it all up. still pretty ground beef-ish, huh? 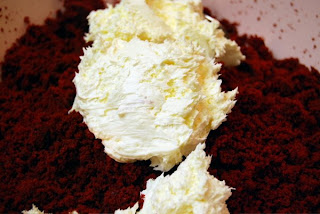 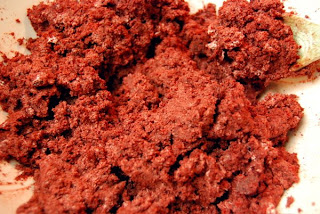 it was getting pretty late by then, so i scooped out the balls, rolled them by hand, and set them on a cookie sheet in the fridge to chill overnight. 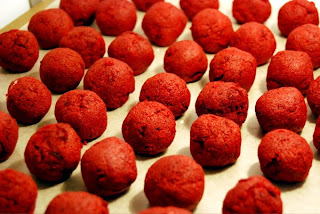 i somehow woke up super early on sunday morning - like 6:30-early. i laid there for about ten minutes before i realized i wasn't going to fall back asleep, so i got up and decided to proceed with the final steps of operation cupcake bite.

since i don't have a double boiler, i just use my soup pot and a medium-sized pyrex bowl that magically fits perfectly inside. i poured in a couple of inches of water and turned it on to simmer, put my candy melts in the bowl, and set it in the pot. 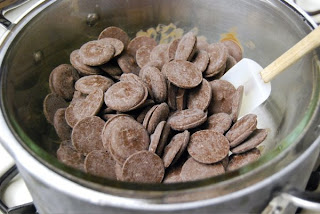 i stirred and stirred... 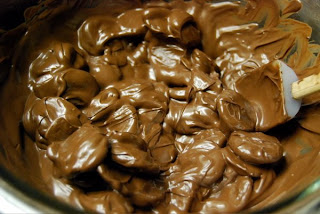 and finally, the chocolate was all melty and gooey and ready to go. 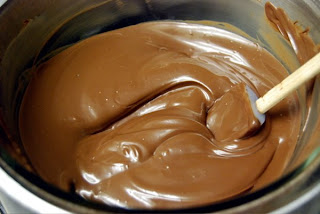 i was a little apprehensive about the dipping and decorating part, because past experience has taught me that i'm really not good at this kind of stuff. i always wanted to dabble in cake decorating and candymaking, but my talents apparently only lie in the actual cooking/baking. let's just say that wan will never be a food stylist and leave it at that.

but i followed bakerella's instructions carefully, spooned a bit of chocolate into my candy mold, and pushed a cake ball in, making sure to press down hard enough to make the chocolate come up along the sides of the mold. 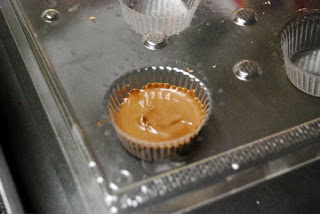 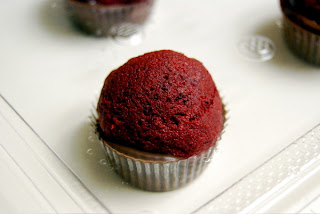 so far, so good. and it was pretty easy, although i ended up getting a little too generous with the chocolate in a few of the molds. oops. 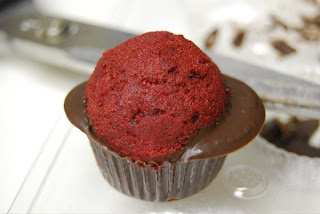 the tray only had 8 spots, so after i'd done the first batch, i put it in the freezer to harden, sat down at the computer, did a little tweeting, and caught up on my google reader. luckily, it only takes a few minutes for the chocolate to firm up, so i didn't have to wait long. and i was happy to see that the cupcakes popped out really easily - no nonstick spray or anything needed. although those overly-coated pieces required me actually taking my trusty kitchen scissors and trimming off the extra chocolate. too much chocolate! well, i never. 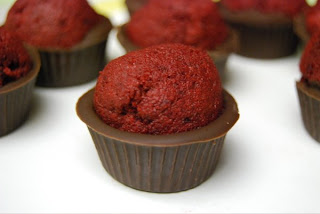 as i got to the last of the cake balls, i found that my generosity with the chocolate came back to bite me in the ass. i had about seven left to make, and only this much candy to work with: 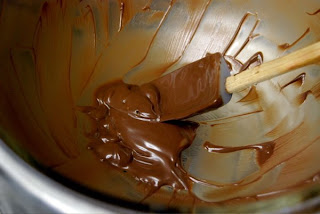 oh, well. i cranked out two more and called it a day. i washed the bowl out, dried it carefully (you can't get any water in with the candy, because that just fucks it all up), and poured in the second bag of candy melts - pink this time, for the "cupcake" tops. 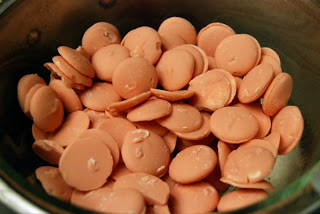 as i waited for the chips to melt, i inspected my container of decorative sprinkles, which was actually a valentine's day set. heh. i liked the sprinkles, but there were little red candy "lips" in there, so i poured some out and picked out the offending pieces. 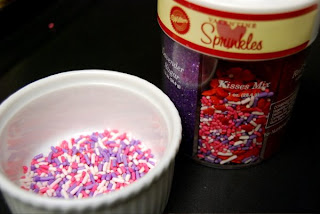 and because it required both hands to do this part, i don't have any pictures of the dipping process. but i was stoked to see that it was easy peasy - i just pulled a few of the cupcakes out of the fridge at a time, leaving the rest to stay nice and chilled. working quickly, i plucked a bite from the tray, held it by the chocolate "paper cup" part, and dipped and twirled into the pink candy. i sprinkled some of the colorful decorations on top, set it down, and repeated the process until all of the cupcakes were dressed and ready to chill until the BBQ later that day. 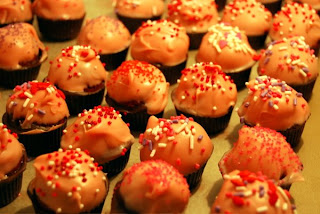 i took a picture on the iPhone and sent it to the teen (still at her dad's until noon), and laughed at her excited response: "those are AMAZING! are those mini sprinkles cupcakes??" heh. no, love, these are so way better. 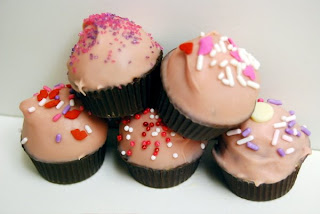 all in all, with the dipping/decorating taking a solid two hours to complete, i figure i spent about 3.5 hours on this project. but it was worth it - the teen loved 'em, i had fun making them, and they sure are delish. yay!