it seems like ages and ages ago that i talked the teen into signing up for a 5K with me that had a silly twist to it - participants were encouraged to wear their pajamas for this run that would take us down a path along the ocean in long beach.  since we're both suckers for fun themes like that, it wasn't hard to get her to commit.  and because it was via one of those deal-a-day sites, i talked my friends kelley, mr. lilcee, and mr. winnie into joining us too.

unfortunately, kelley ended up having to back out at the last minute due to a family emergency.  but rather than let the entry go to waste, she let me pick up her bib along with mine and the teen's and give it to lilcee.  and since the bean had decided that she really wanted to come along too, the teen decided to walk the route with her in the stroller.  this gave lilcee the chance to bring mini cee and do the same thing.

we timed our arrival to allow for traffic and parking, and headed on out towards the expo and start line. 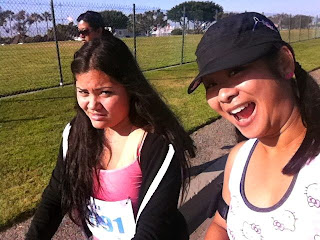 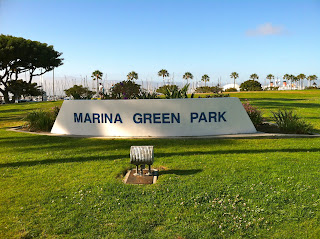 since we already had our bibs in hand, we had time for a leisurely stroll through the tents to see what there was to see.  there were a few cars on display - the local fiat and toyota dealers were sponsors of the run along with lots of different food and snacks. 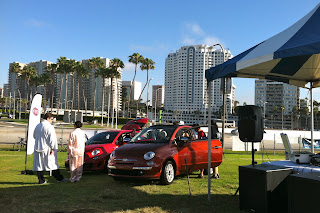 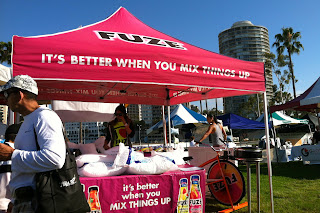 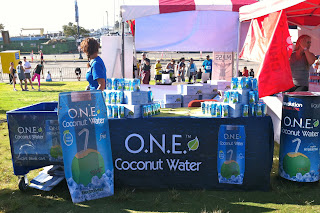 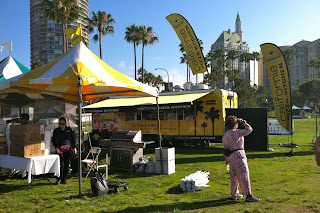 it was just after 8am, but it was already shaping up to be quite a warm, sunny day. 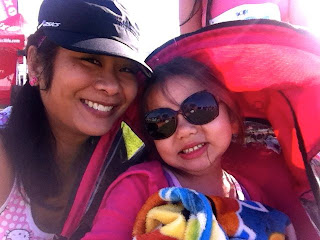 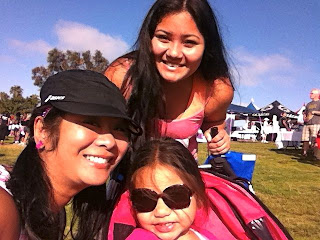 as luck would have it, we happened to be standing right next to the same group i'd run that wack ass cinch de mayo 5K with.  not wanting to look like weirdo creepers, we settled for taking a picture of "me" instead, with them in the background.  muahahahahaha.  do you love my hello kitty nightgown, by the way?  it's super comfy. 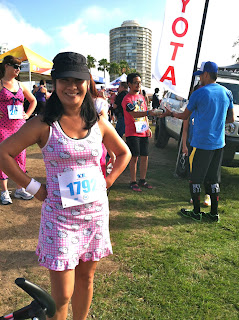 as the group warm-up and stretching began, the bean decided to join in from the comfort of her stroller. 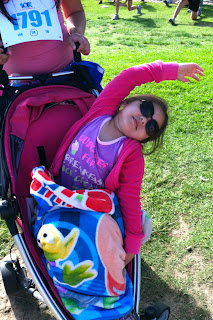 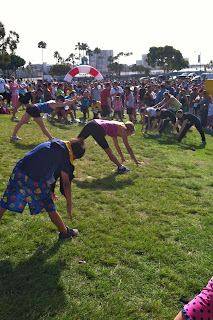 not long after we connected with the cee family and mr. winnie, the run began.  and since we hadn't been given any timing chips, we took our time and let a good chunk of the crowd get ahead of us before heading down to get started.  the path was a narrow one, and it was going to be quite the madhouse. 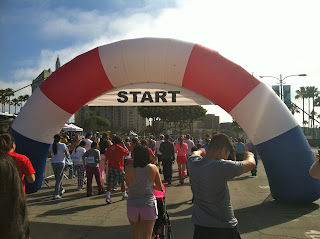 sure enough, it was tough to maneuver through the crowds.  since we'd hung back a bit, we were amongst walkers and strollers and kids and others who wanted to sashay down the path all in a row (one of my biggest pet peeves during these things).  the guys ended up separating from the pack a bit and heading down towards the water to run alongside the path until we'd passed most of the walkers and caught up with the faster folks.  i managed to keep up pretty well and found myself continuing to plod along without a walk break for a good majority of the 5K.  pretty soon, i was here: 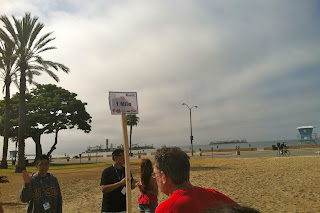 i was using my c25k app to track my pace and mileage, and found that the distances were slightly off.  the app chimed in to give me my mile marker a good while before i got here.  but it seems like most races are off a bit, so no biggie.  and before i knew it, i was at the halfway point and turning around, while the guys continued on (they were doing the 10K). 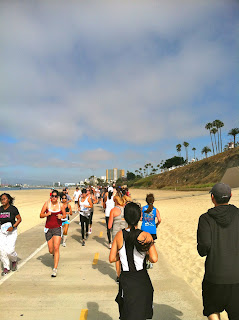 as i kept going with surprisingly few walk breaks (i only stopped twice!) and the sun beaming down on me, i came upon this chick.  i couldn't even imagine wearing that hot ass costume for any stretch of time.  it'd have been like a damn sauna up in there. 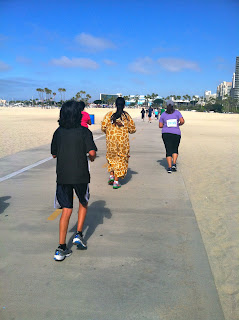 i made my way around the final curve and as i sprinted towards the finish line, i caught a glimpse of the teen, the bean, lilcee and mini cee waving and cheering me on.  i waved back and saw the teen snap a photo.  too bad i was just too damn speedy for her to catch me in action.  heh. 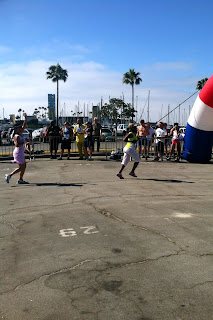 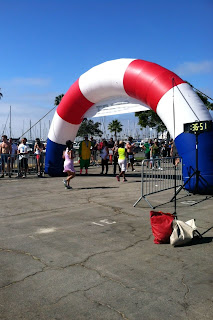 there was a pretty long line for our finisher's medal, but i like my hardware. 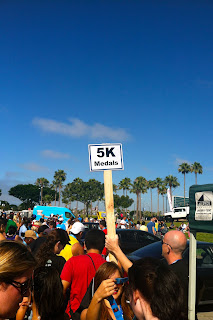 kind of weird - instead of water, there were little bottles of orange and tangerine and strawberry juice.  i grabbed a couple anyway and then headed off to join my peeps. 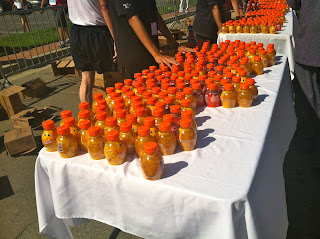 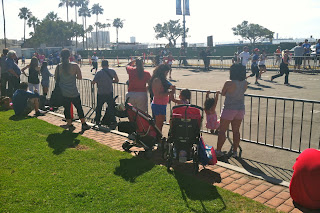 turns out they'd decided to cut their walk short by a bit and made a u-turn as they got to the 1-mile mark.  but that's a good amount of walking too, so i say she totally earned this. 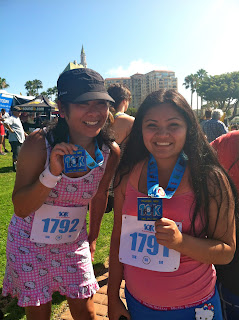 plus, the teen took this of the bean as she got out of the stroller and ran to the finish.  i love it. 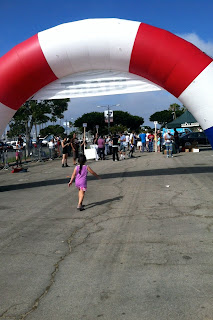 after a slightly hellish exit from the parking lot (with about a bazillion other people), i decided to introduce the teen to my new favorite obsession:  iced sea salt coffee from 85 degrees bakery.  so yum. 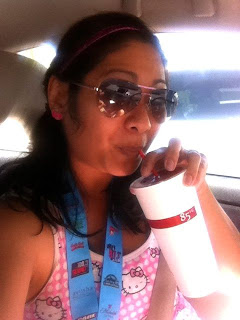 all that sun and excitement really wore the bean out.  having gotten up at 6:30, she was down for the count at 11. 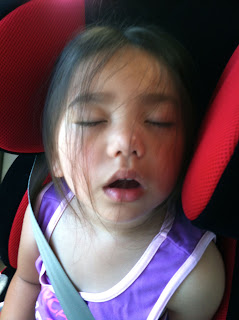 you'd think that would've been enough fun for one day, right?  but...uh, no.  leaving the bean to bond with her daddy, the teen and i took off for the local movie theater for a bit of female bonding.  oh boy, did we. 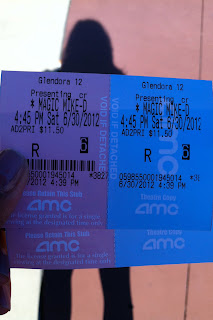 i'd managed to earn some concessions cash with the theater's rewards program, so i scooped up these snacks without a penny outta my pocket - with another $5 left to spend during our next outing. 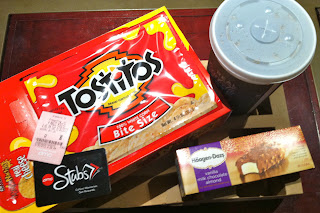 from the moment the movie started, we were captivated.  mind you, i despise actual male strippers.  they're always all greasy and cheesy and gross.  but this - this was different.  this was a bunch of hot ass hollywood movie stars.  although i must say, i was pretty damn skeeved out by matthew mcconnaughey in this flick.  he did a good job of portraying the super smarmy 40+-year-old stripper. 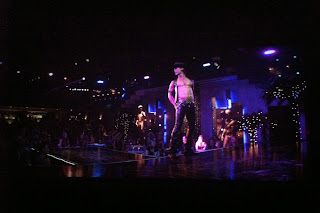 if your'e at work or something while you read this, you'll want to scroll past the next picture pretty quickly.  it's not terrible, but not exactly "work safe." don't say i didn't warn you.

now admittedly, it was a little awkward sitting next to my daughter as i indulged in some good old-fashioned ogling, especially when hottie mchotterson (otherwise known as channing tatum, aka the only reason i wanted to see this movie) appeared onscreen in his birthday suit. 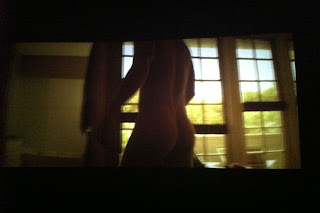 but as the movie played on and the good stuff started - the DANCING! channing is a damn good dancer! - she and i muttered "oh, helllll-o" in unison, along with every other woman in the theater. 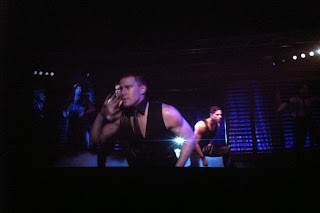 Email ThisBlogThis!Share to TwitterShare to FacebookShare to Pinterest
Labels: magic mike, running my ass off, the teen can walk