waste not, want not

okay, so i have a confession to make:  although we were less than impressed by our recent trip to legoland, we, uh...went back.  and why?

because i am a cheapskate who cannot bear the thought of wasting a perfectly good ticket that cost a pretty penny.  times four.  ha!

if you recall, we scored on some resort hopper passes via the legoland website for our trip on the 4th of july that also included a free second day.  and upon closer inspection, i figured out that if we didn't use that additional day's admission within nine days of our first trip, it expired.  so yes, we totally made the drive down to carlsbad a second time within about a week to use those tickets.

the ILs are in town for a lovely extended visit, although FIL does have to go into the office on a regular basis.  so since the hub was hard at work that day, MIL happily took his place.  and although the teen was with her dad for the week, she was able to come home a day early to join us for the fun.  it was quite a happy group - we always have a great time on adventures together.

my original thought was to hit up the water park this time around.  since the weather was ridiculously  hot at home, i figured that the temperatures down south had to be at least a bit more conducive to waterplay, right?

as we pulled into the parking lot, it was cloudy and overcast, with temperatures hovering in the low 70s.  boo.  the bean, however, was thrilled to return to the aquarium and show us all around to her most favorite spots.  that kid is all about the silver lining, thank goodness.  after taking a trip down the slide in the first room we entered, she led the way and gave us our very own personal tour of sea life aquarium. 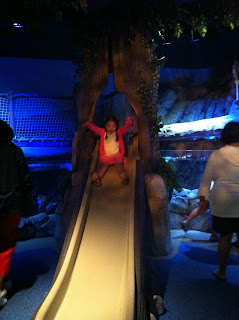 she'd obviously spent some time at this exhibit, where she went through a little door just her size and climbed underneath the fish tank to stick her head into this glass bubble. 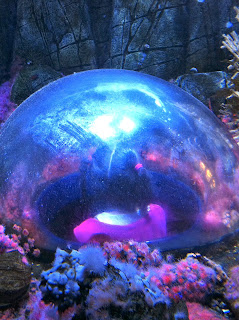 this sight renewed the teen's old desire to have her very own pet starfish.  too bad she still isn't getting one (sorry, babe). 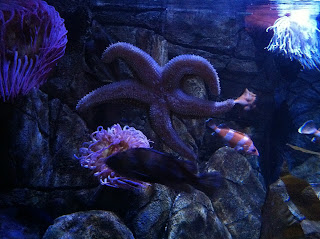 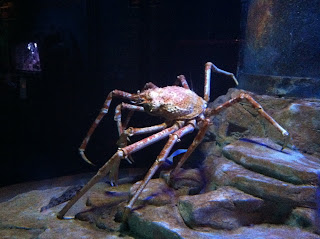 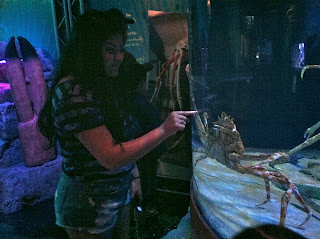 and this lobster...he was enormous. 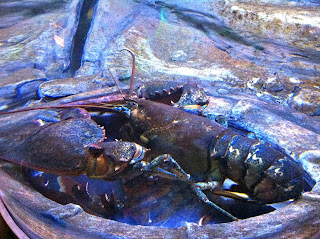 she is definitely soaking up every moment of grandma time. 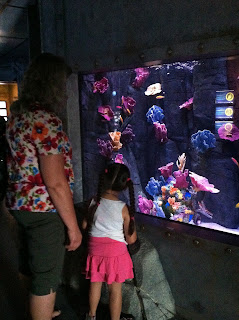 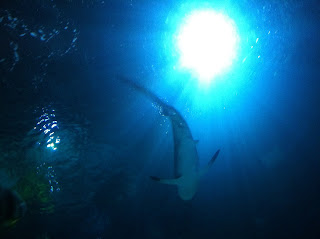 lest you forget where you are, little lego reminders are everywhere. 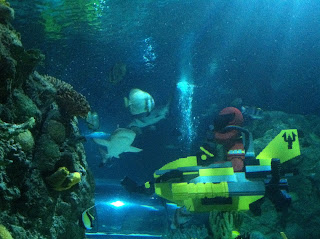 she learned about how sea animals are electronically tagged and tracked in the ocean. 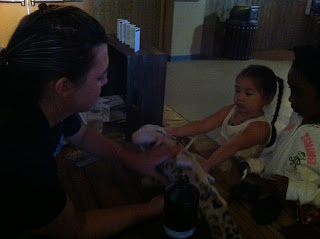 at the end of the tour, guests are conveniently dumped into the cafe. 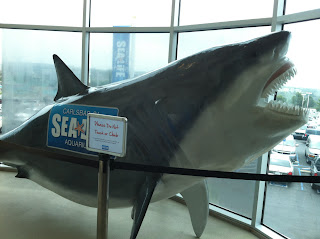 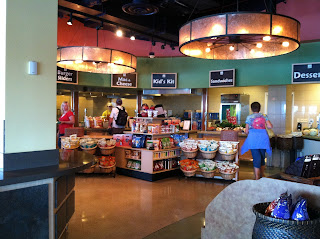 we did go into legoland, too.  this time, we strolled through a section we hadn't seen last time: 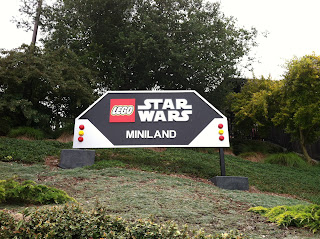 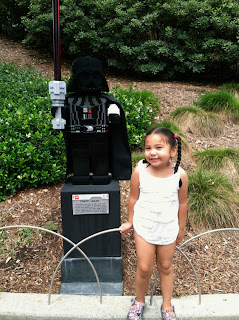 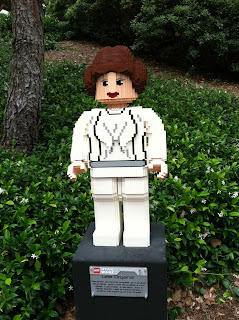 i'm not a huge star wars fan, but these little scenes from each movie are super detailed and really cool. 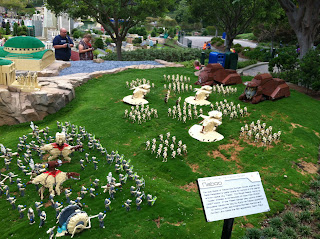 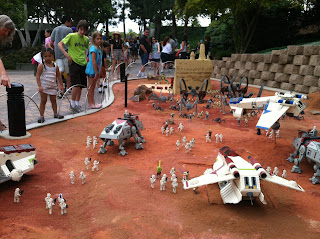 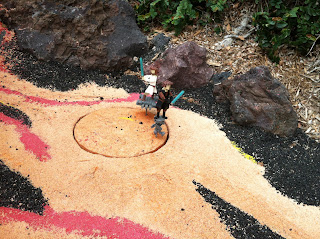 i liked their version of the hollywood bowl and mann's chinese theater, too. 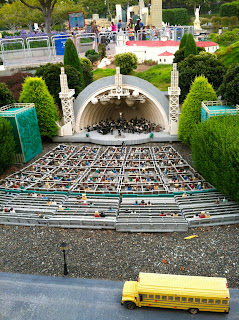 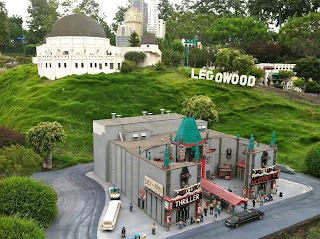 it actually did warm up a bit, so when we got to the little kiddie water playgrounds, the bean happily stripped down to her suit and played in the fountains. 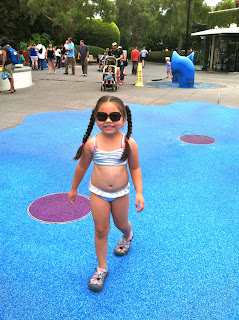 we made our way around to the "pirate reef" area, which we'd also previously skipped as it consists mostly of water rides and attractions.  we rode one ride all together, which the teen hated (she doesn't love getting wet and then walking around in soggy clothing), and then i took the bean through the kiddie water park.  it was lots of fun, and then we took advantage of this weird-looking thing: 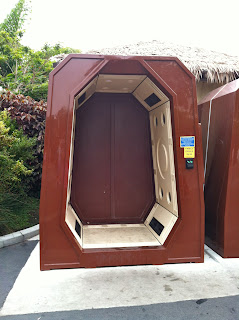 what the hell is that, you ask?  well, for $5 you can cram a group of wet people in there and stand under heat lamps and numerous vents and get all dried off.  see? 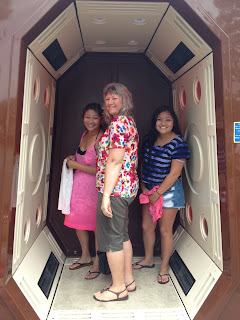 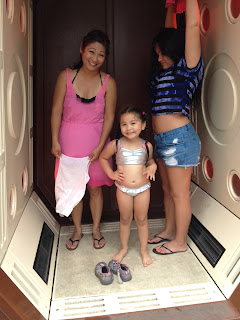 it was pretty hilarious.

by then we'd worked up a pretty good appetite, and instead of staying in the park for burgers or pizza we headed back to that aquarium cafe for some better options.  there were lots of healthy snacks, baked chips, sandwiches, salads, and other good stuff - like the teen's mac & cheese with grilled chicken: 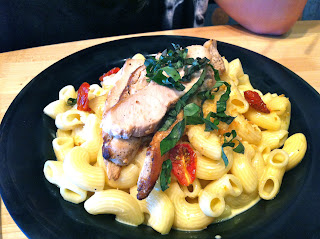 when we were all stuffed silly and hit the potty and were all ready to head back home, the bean found a friend to pose next to for one last picture. 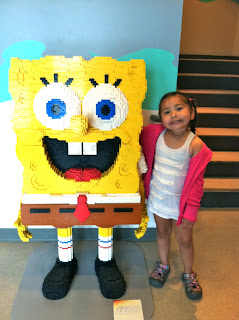 believe it or not, we still made it back home in plenty of time for swim lessons.  all in all, it was a pretty darn good day.
at July 17, 2012

Email ThisBlogThis!Share to TwitterShare to FacebookShare to Pinterest
Labels: legoland, wan is a tightwad