i actually did do a little bit of cooking last week, despite the craziness of our schedules.  honestly, i despise cooking when it's hot, but with the frequency of our eating out lately i knew i needed to suck it up and get into the kitchen.

while on our impromptu drive down to malibu, i flipped through the current issue of food network magazine and mentally filed away a shopping list to make a few of the recipes i'd found.  one of them was a simple sounding fettuccine dish with prosciutto and asparagus, and although i didn't get any pictures of it, i can report that it's really yummy.  i tried to pare down the fat and calories by cutting the cream in half and subbing some fat-free half and half, and found the noodles in a whole-wheat version with flaxseed and chia seeds in it.  it all cooked up really quickly, and the longest part of the whole process was getting the water to boil.  i highly recommend this one - really tasty and easy.

the next day, when i looked through the index to find the other recipe i wanted to try, i was stumped.  it wasn't anywhere in the table of contents, but i knew i'd seen it in there somewhere.  i had to resort to flipping through the whole damn magazine page by page to find it, and it ended up being part of an advertisement for pork.  bah!  but it was totally worth the search - bacon-wrapped pork chops with a BBQ glaze.  that's a whole lotta goodness all tied up in one pretty little package.

i was happy to see that it was also a super easy one to make, and the hub was more than happy to finish off the beer i had to crack open for the glaze.  i served it with some wild rice, topped it with extra sauce, and voila: 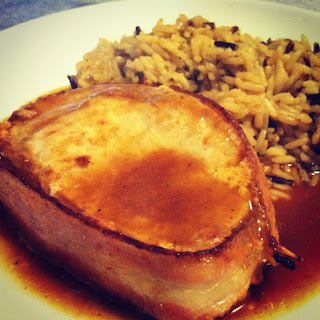 i don't know what came over me, but i was hit with a craving for a red velvet cupcake like whoa.  i've used recipes for "cupcakes for two" before with great success, and i figured i could just take a vanilla one and doctor it up to give it that lovely cocoa/buttermilk flavor.  but my friend google came through when i decided to take a stab in the dark and see if maybe i didn't have to treat it as an experiment.  wouldn't you know it - as i typed in "red velvet cupcakes for two" the very first result was exactly what i wanted.  i always end up with more than two, though, and in half an hour this is what i had: 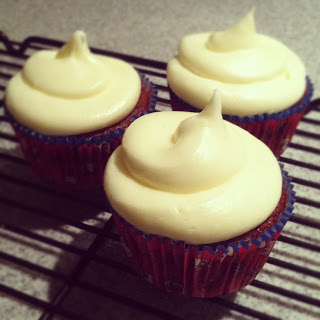 Email ThisBlogThis!Share to TwitterShare to FacebookShare to Pinterest
Labels: adventures in cooking, bacon, red velvet anything is good