last year, i totally dropped the ball and ended up putting the bean in swim lessons right at the end of the season.  it wasn't super effective, since she didn't get to practice much, and so i made sure to get her signed up for her first session nice and early this time around.

while she's still very much a beginner, i didn't go with the "parent and me" class - i didn't think it would benefit her at all, and in fact felt like having me in the water with her would just make it harder.  i was a little afraid of how she would handle it all, since she's like me and absolutely despises getting her face wet and being underwater.  but i bit the bullet and put her in the level 1 class, which required zero water  skills and goes for just half an hour every weekday for two weeks.

she was fairly excited to go on the first day, especially after being bribed with a brand new swimsuit. 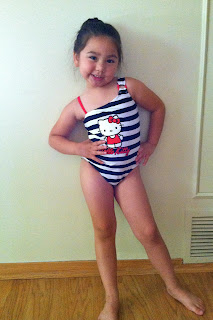 but as predicted, she hated it.  in the first five minutes, she'd been dunked underwater at least twice, and the teen and i cringed as we heard her crying all the way across the pool.  those teachers were hardasses - if the kids didn't want to do as they were asked, they basically made them do it anyway.  i felt awful, but i knew it had to be done, and greeted her with a smile and a nice dry towel when it was all over.  she bawled for a few minutes in my arms, and i absolutely dreaded taking her back the next day.

the mere mention of swim lessons brought out the pouty lip and puppydog eyes, even as i tried to get her excited about it.  she damn near refused to put her suit on for day two, but i joked and tickled and giggled until she relented and let me get her dressed.  the whole way to the pool, she said "mommy, i don't wanna go to swim lessons.  i don't want to be a mermaid."  and yet as i walked her to the entrance (they don't allow parents on deck, and the instructors are all trained to deal with reluctant and/or wailing kids), she went willingly and got right into the water.  she surprised the hell out of me as she did everything that was asked of her, didn't shed a single tear, and was even smiling and laughing by the end of class.  phew.

every day has been a little easier, and while she still says she doesn't want to go, by the time we arrive she's all in.  i finally remembered to bring the camera with the zoom lens, and got some fun shots.

here, she's taking on the challenge of going all the way into the water at least five times in a row. 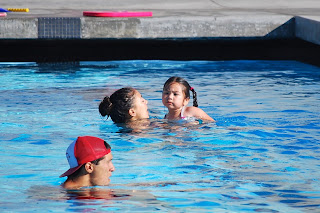 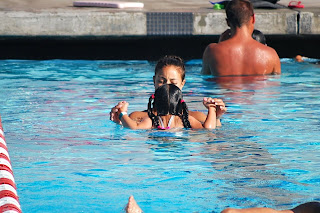 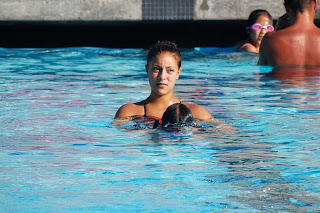 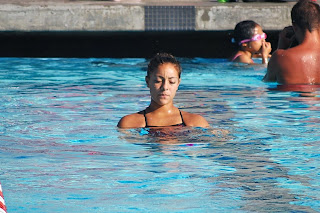 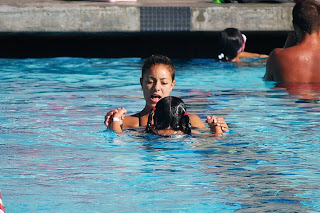 and i think she secretly really enjoys the jumping in part. 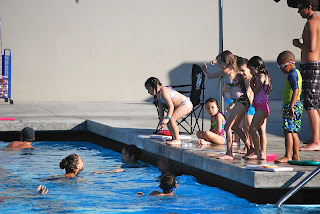 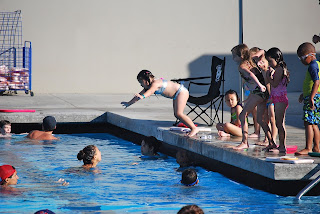 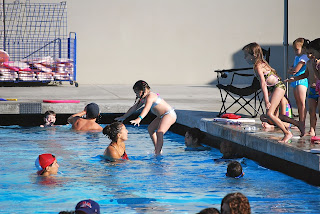 the only downside to these lessons?  this little boy.  i shit you not, that kid cries through every moment of class, every single day.  the teen and i are ready to shoot ourselves from listening to that low-pitched, never-ending wailing that echoes from across the pool. 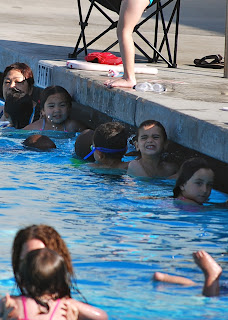 but we cackle evilly when the lifeguard inevitably picks his ass up and tosses him into the pool along with the rest of his class.  i know, we're mean.  whatever. 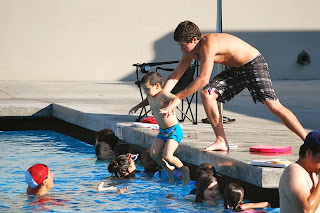 meanwhile, the bean is hard at work learning how to swim like a mermaid. 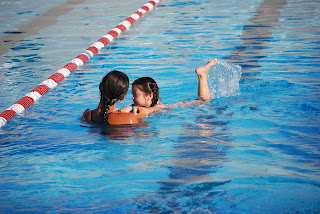 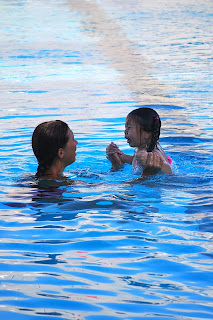 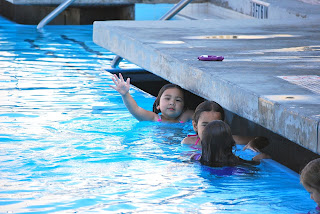 we're almost at the end of the first session, and it's time to re-enroll for the next two weeks.  i'm not gonna lie, it's kind of a bummer having these lessons hanging over our heads every single day.  but watching her get more comfortable in the water and voluntarily dunking herself in there is really fun.  since i'm not that great of a swimmer, i'm excited that she's going to be.

cross your fingers that she's able to swim without flotation devices by the end of summer.
at July 05, 2012