a visit from the toof fairy

one of the bean's bottom teeth has been loose for quite some time now.  she's been working on it and it's been reeeeeeeally wiggly, but it was definitely taking its sweet time coming out.  and then the other morning she came up to me and said "mommy, it feels like there's something sharp in my mouf."

yes, she still pronounces words that end in "th" like that.  it cracks me up.  i know i should correct her, but it's so cute and she'll grow out of it soon enough.  shut up.

so anyway, she opened wide and showed me what she was referring to inside her mouth.  and sure enough, new teeth were making their way out into the world.  i explained what was happening to her and encouraged her to work on wiggling that tooth out so that it could make way for her grown-up one.

i shit you not, it was maybe an hour later as we were just kicking back watching yet another episode of "my little pony" (kill me) when she sat up and exclaimed "MOMMY!  my toof just came out!"

immediately, i reached for a tissue with one hand and my phone with the other. 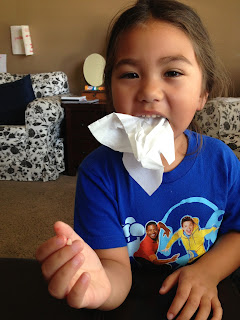 she was so incredibly proud and excited and triumphant and elated.  i can't tell you how many times she breathed "i can't believe i finally lost my first tooooooof" that afternoon and evening.  it was really cute. 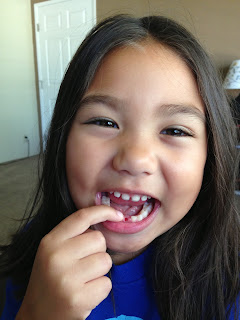 as the day went on, i came to the conclusion that she absolutely had to have a tooth fairy pillow.  you know, something with a little pocket to put the tooth in.  after all, that thing is tiny.  it'd take some serious stealth moves on the tooth fairy's part to find it under her pillow without waking her up.  ain't nobody got time for that.

a quick search on pinterest turned up all sorts of ideas, but one in particular caught my eye.  the bean and i only recently discovered the awesomeness of the minions from "despicable me," and although that pin led to an etsy store to purchase the premade pillow, i knew i could figure it out easily.

my fabric stash is crazy and out of control, but it really pays off in times like this.  i had about two hours until bedtime to get this thing done, and i got right to work.  google gave me the perfect tooth outline to use as a pattern, and because i seem to enjoy making things more complicated for myself, i decided that this minion needed to be wearing blue like his movie counterparts.

after a lot of cutting, sewing, sweating, and stuffing, i was pretty pleased with the results. 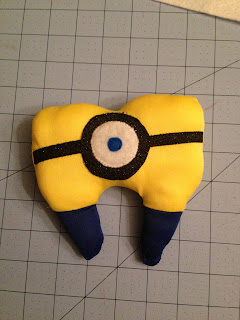 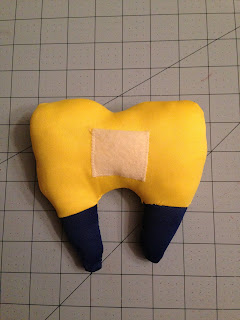 the bean thought it was great.  although she saw something i'd missed:  "mommy, where's his smile?"  bah! 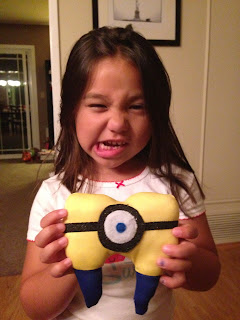 i sure as hell wasn't about to take it apart again to sew on a mouth (not to mention, i didn't really leave much room for one), so i busted out a sharpie and took care of business.  you can't see it too well here, but it worked well enough to pass the bean's inspection. 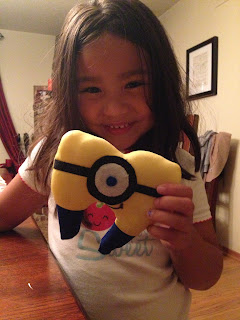 from my seemingly endless stockpile of...stuff, i found a little box to put the tooth in: 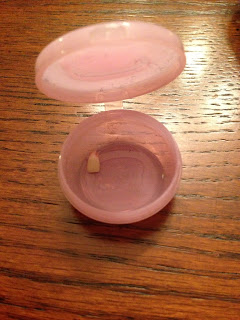 ...except that the little pocket i sewed on the back of the pillow was too small.  poop. 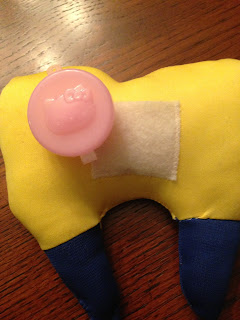 no worries.  this worked just fine: 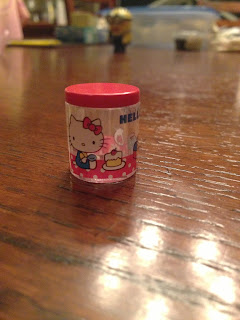 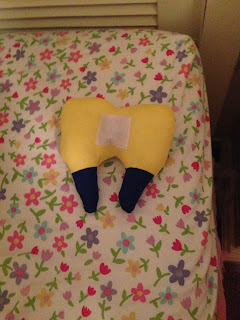 my friend nanette clued me in to another pinterest-y gimmick for times like this (thanks for that, yo). 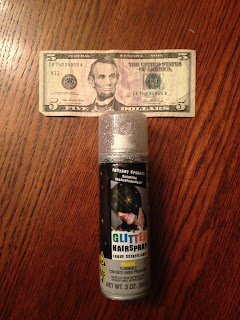 i mean, come ON.  it's the tooth fairy - she can't just leave any old plain boring money behind.  of COURSE it has to be sparkly. 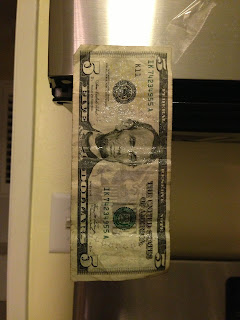 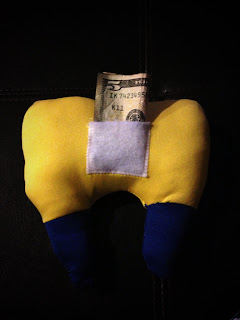 the next morning, i got up early for a quick run.  except that i underestimated my kid's excitement over seeing what the tooth fairy would leave her.  when i got back, she was already up and had found her surprises. 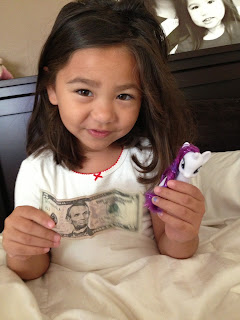 oh, and don't bother to cyber-smack me for the high price of that tooth.  i've already gotten twitter-bitchslapped quite a few times over.  but come on - it was the first one!  subsequent losses will be rewarded with sparkly $1s.