the bean spent all year telling me how she didn't want summer to come because she didn't want to go to swim lessons.  i'm guessing she was still traumatized from last year's memory of standing at the edge of the diving board, watching the lifeguard come towards her and knowing he was gonna pick her up and toss her little ass in.  heh.

of course, when it finally became time to head to the high school for those lessons, it was butt ass hot and she was more than ready to jump into the cool, refreshing water.  she hadn't managed to advance to the next level at the end of last year's season, so the beginning class was treated to this little ball o'sass. 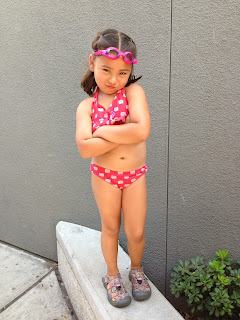 my ongoing concern with swim lessons is that with no pool at home, she doesn't get to practice her skills outside of that daily half-hour lesson.  and we'd missed the first couple of sessions, so she was only going to get to take four weeks' worth of classes this year.  better than nothing, i suppose.

and she totally proved herself wrong - she kicked ass during that two week period.  i'm thinking that all that confidence she gained during her year of transitional kindergarten also extended to things she'd been afraid of before.  plus, i noticed a lot of improvement in her gymnastics classes over the last year.  it's pretty amazing how far she's come since last summer.  in fact, at the end of the first session, she proudly brought home a certificate that showed that she'd mastered the skills at the beginner's level and was ready for the advanced class.  woohoo!

she had a great time with the new class, learning all sorts of skills and far surpassing her mother's swimming capabilities.  the last day of class was "friday fun day," during which they were allowed to bring a water toy and the parents were finally able to go in and sit on the bleachers instead of crowding around outside on folding chairs. 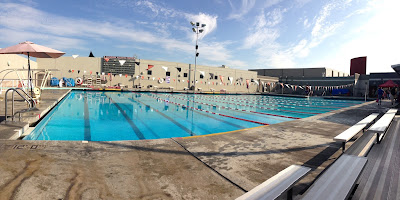 the kids are taken to the far end of the pool for this final class, tiptoeing to the end of the diving board and (hopefully) jumping off and surfacing next to their teacher.  i'd not been able to watch her do this at the end of the first session, so i was extra excited to see what she could do now. 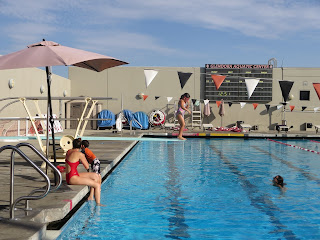 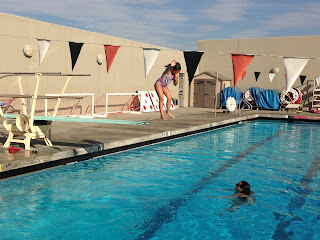 as if this weren't badass enough, when she came up to the surface she pushed off of her teacher and swam using overhand strokes to the end of the pool.  WUT. 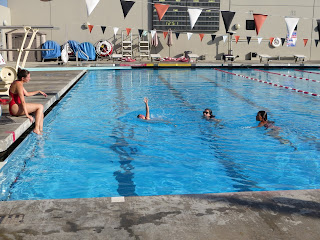 instead of sitting at the shallow end of the pool after that first dive, she went back again and again.  seriously, i thought i was going to explode with pride. 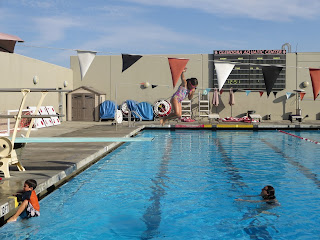 
she may not have passed the advanced level this time, but i have high hopes for next year. 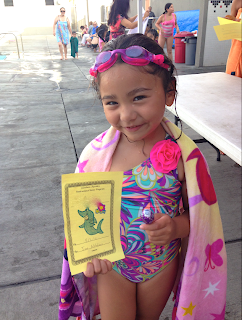