i was stupid excited when my friend diane emailed me out of the blue one day inviting me to a show taping that one of her friends was coordinating.  even better?  the show being taped was to be a performance piece for the upcoming labor day MDA telethon - by the backstreet boys.  and if that weren't enough, my beloved ryan seacrest was going to be there as well.

i about shit myself with excitement when i looked at my calendar and figured out that i would indeed be  able to attend.  after a few more emails, i managed to secure a seat for the teen too.  she's not necessarily a big BSB fan, but she digs going to show tapings as much as i do.

and wouldn't you know it - the night before the show, the bean got the sniffles.  i was super bummed, but knew she couldn't go to summer school and risk spreading any icky germs.  i decided to wait it out and see how she felt in the morning before i hit "send" on the email to back out.

as she usually does, she woke up feeling fine and dandy the next morning.  i still didn't want to send her to school just in case, and remembered that the first email about the taping had said that all ages were welcome.  so...yeah.

the studio was at a familiar location - CBS television city.  as for previous tapings we've attended, we parked at the grove and walked over.  the first thing we saw when we headed to the elevators was this: 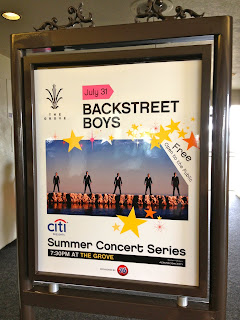 the boys were headlining the grove's final concert of the season that night.  i knew it would be packed beyond belief, so i'd had zero plans to go.  but as luck would have it, we walked right past the stage that was all set up - and stumbled across their soundcheck.  i actually didn't even realize what was going on until the teen nudged me and pointed.  "aren't those your guys right there on the stage?"  sure enough... 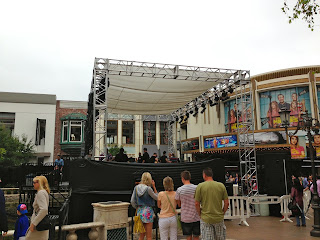 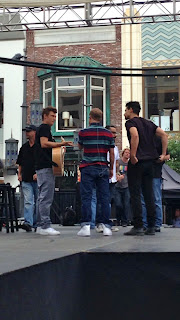 we took a short walk down the street and into this gate: 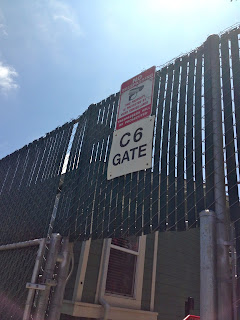 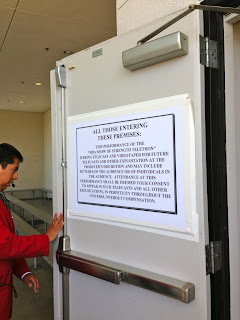 and we were seated off to the side, but in the front row for that section. 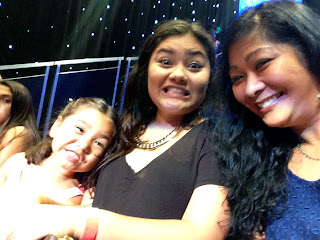 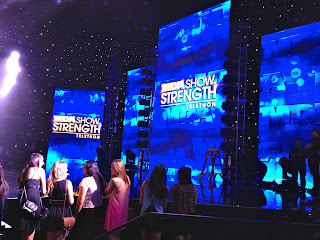 there was a lot of waiting around, but at least we were seated and didn't have to turn in our phones at the door.  the bean was less than impressed, though. 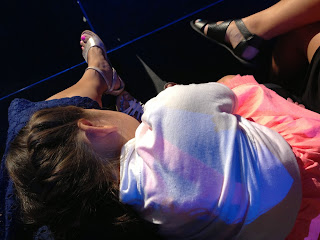 finally, the producer came over the loudspeaker and announced that the boys would be coming out to do a quick rehearsal.  they'd go back to change clothes, come out for the actual taping, and then we'd be done.  easy peasy, lemon squeezy.  and without any major fanfare, they strolled right out and did their thing. 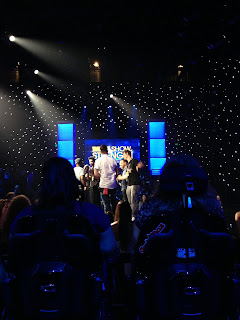 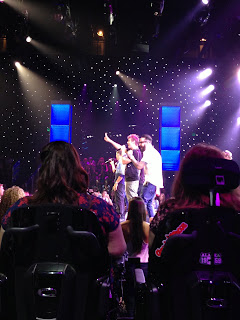 that nick carter, boy.  he sure loves to strut his stuff for the girls. 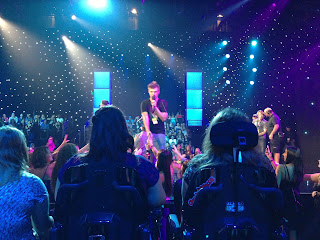 then they started to head backstage... 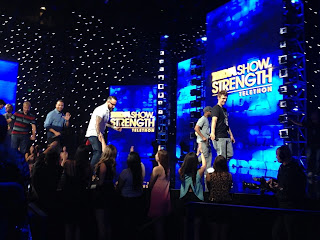 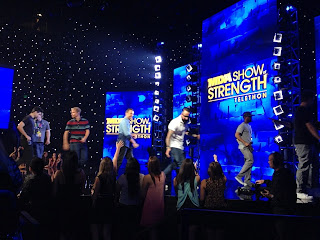 but turned back around to rehearse another piece for the show. 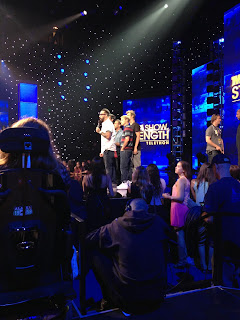 i was a little excited. 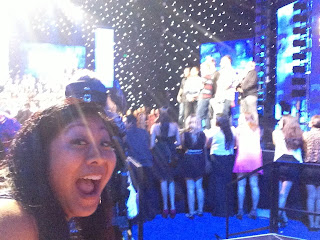 and then they left for that costume change. 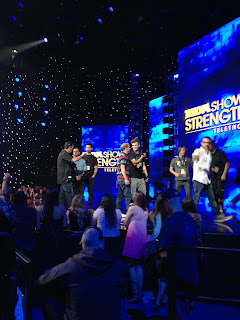 so right about now, you're wondering where the hell ryan seacrest was.  well, so was i.  and the teen watched my face fall to the damn ground when it was announced that he wouldn't be there after all.  sick, is what we were told.  BOO, YOU WHORE.

it seemed to take for-freaking-ever for the BSB to come out and do their thing for real.  the producer finally clued us in on the delay:  "one of their jackets isn't up to par and has to be steamed."  oy vey. 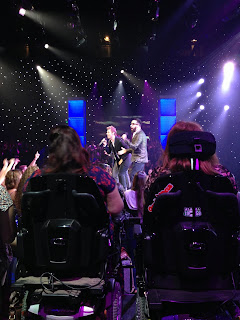 there goes that nick carter again.  the teen couldn't stop giggling at his antics - because "he's so ooooold now." 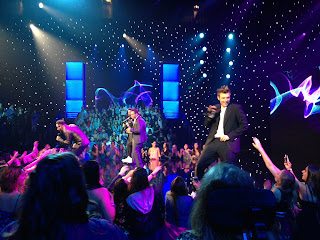 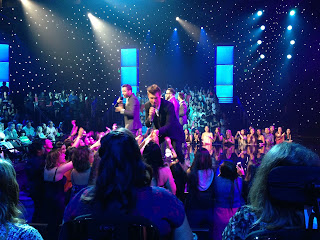 they did two songs - a single from their newest CD (yup, they're still putting out new music), "in a world like this," followed up by - what else?  "i want it that way."  after that was done, they taped their little piece begging for donations, and that was it. 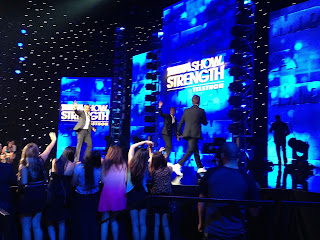 we exited the studio and trudged through the parking lot and around the corner to get back to the grove. 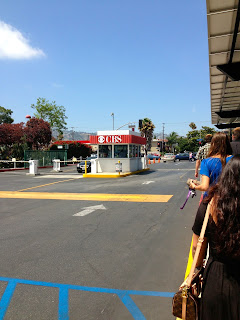 on our way to the farmers market for some lunch, we got another look at the stage and signage for that night's concert. 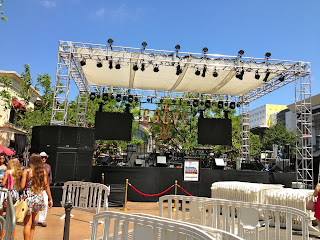 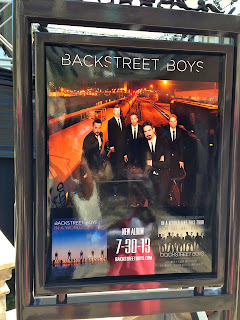 mind you, it was about 12:30 in the afternoon.  showtime wasn't until 7:30 that evening.  but as we peered down the street, we found that there was already quite a lineup of diehard BSB fans waiting in direct sunlight. 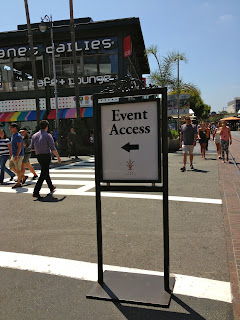 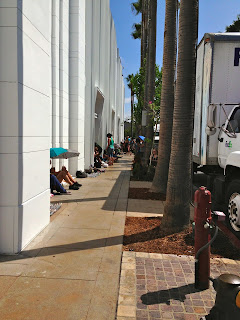 later that night, i was catching up on my twitter feed and read a ton of posts from disgruntled concertgoers who were complaining about the setup and how difficult it was to see or hear the show.  the teen and i were talking about it earlier - the stage was set up in a different area from previous events we'd attended there.  it didn't allow for any spectators on the lawn, but instead kept everyone standing out on the street that runs in the middle of the grove.  it looked like it was gonna suck, and apparently it did.

Email ThisBlogThis!Share to TwitterShare to FacebookShare to Pinterest
Labels: BSB, the grove