it's alright, 'cuz i'm saved by the bell

a few weeks ago, i was perusing the ol' twitter feed when something caught my eye.  mark-paul gosselaar - yup, zack morris himself - posted that he was going to be making an appearance at a charity driving event at a nearby racetrack.  "i'll be signing autographs before the race, come say hi," he said.  and then look at what happened: 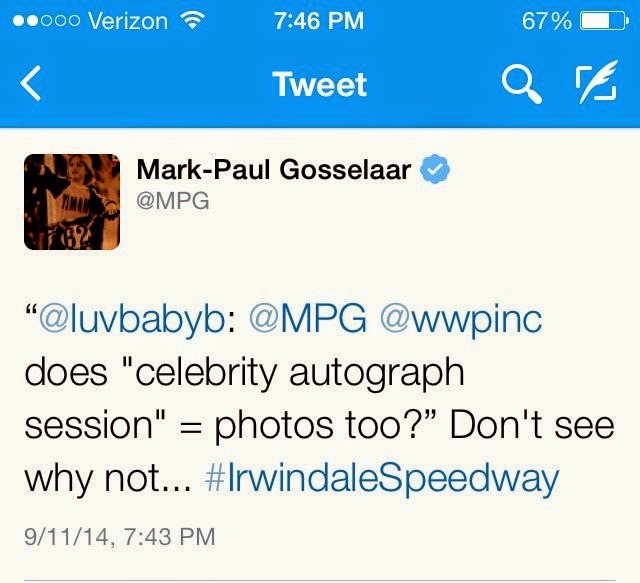 i know, i know, it's super dorky to get excited over something like that.  but you know me.  i mean, come on.  duh.  the only thing was that it was on the very same day as the ll cool j/salt & pepa concert that i was going to with lilcee, daily gluttony and kelley.  but with the autograph session starting at 5:30 and the concert not till 7:30, i figured we could do both.  the teen, who watches mpg's current show "franklin & bash" with me, was all for it.  she loves this kind of crap almost as much as i do.

i told the rest of the girls about the plan, and while kelley opted out, the other two were all in too.  we decided to all meet up at the racetrack and then the teen and the bean could head home from there while i caught a ride with lilcee and DG to the fairplex for our concert.  it promised to be a fun-filled evening, and we were all excited.  well, except for the bean, who had no idea what we were going to be dragging her to.  heh.

she was really confused when we arrived at the racetrack and started heading towards the entrance.  "but what are we doing here?  are we going to watch cars race?"  i just told her we were going to see some cool cars and stuff, and she seemed satisfied with the explanation. 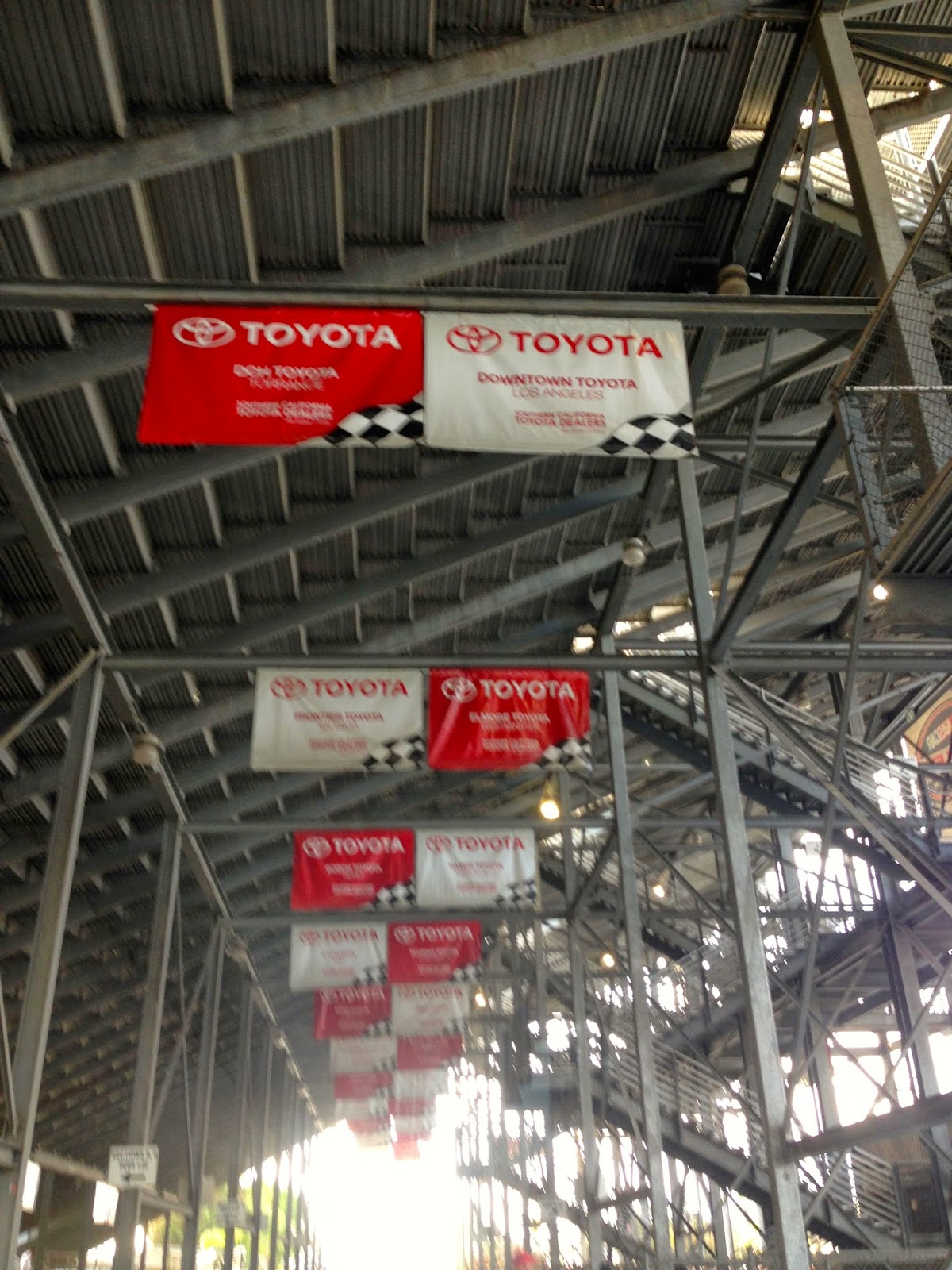 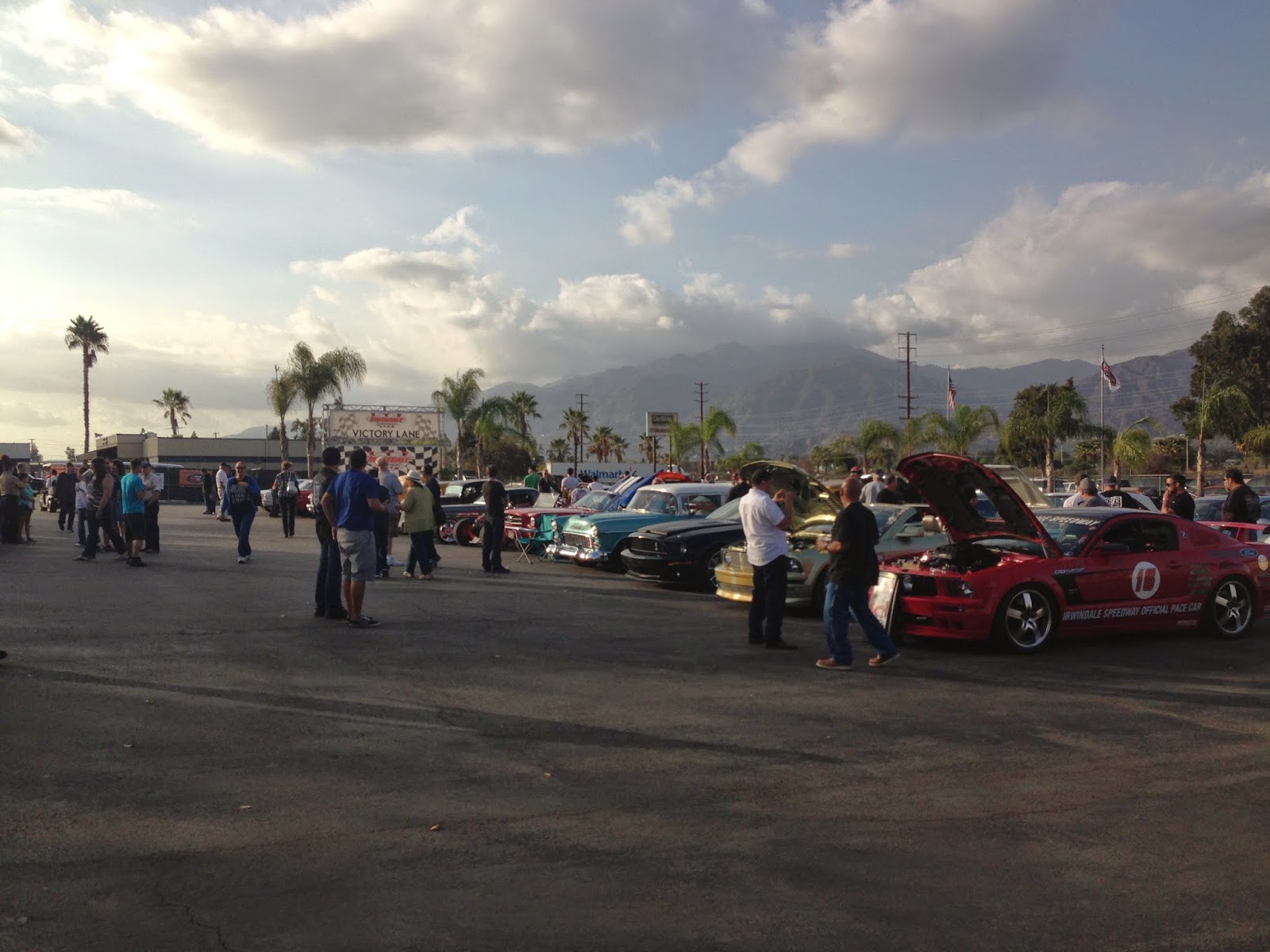 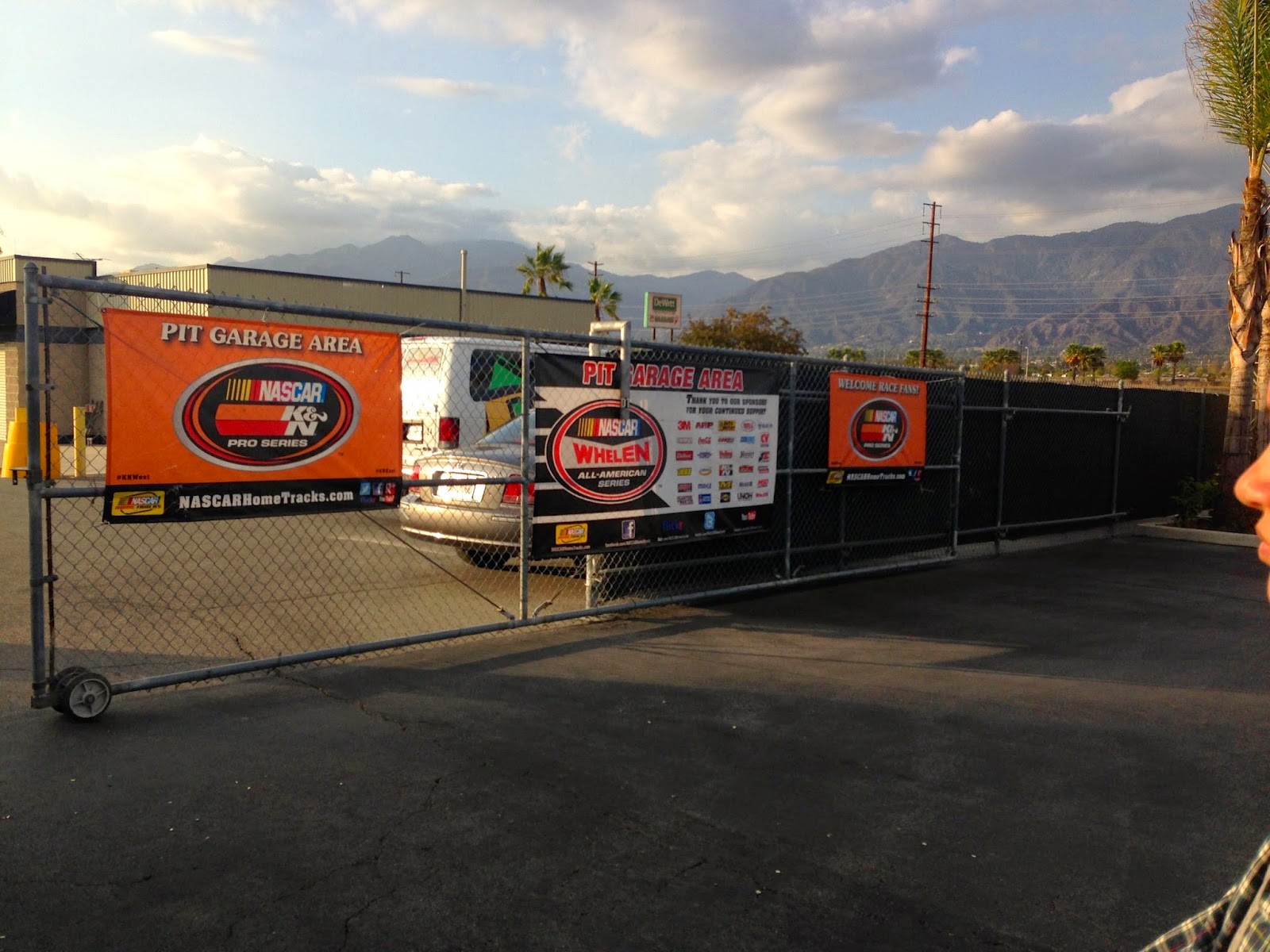 there was quite a line of people already waiting to get in, but i was happy to see that the gates were opened right on time.  we followed the crowd, which stayed in a relatively orderly line until we got inside, and then it was a crazy free-for-all. 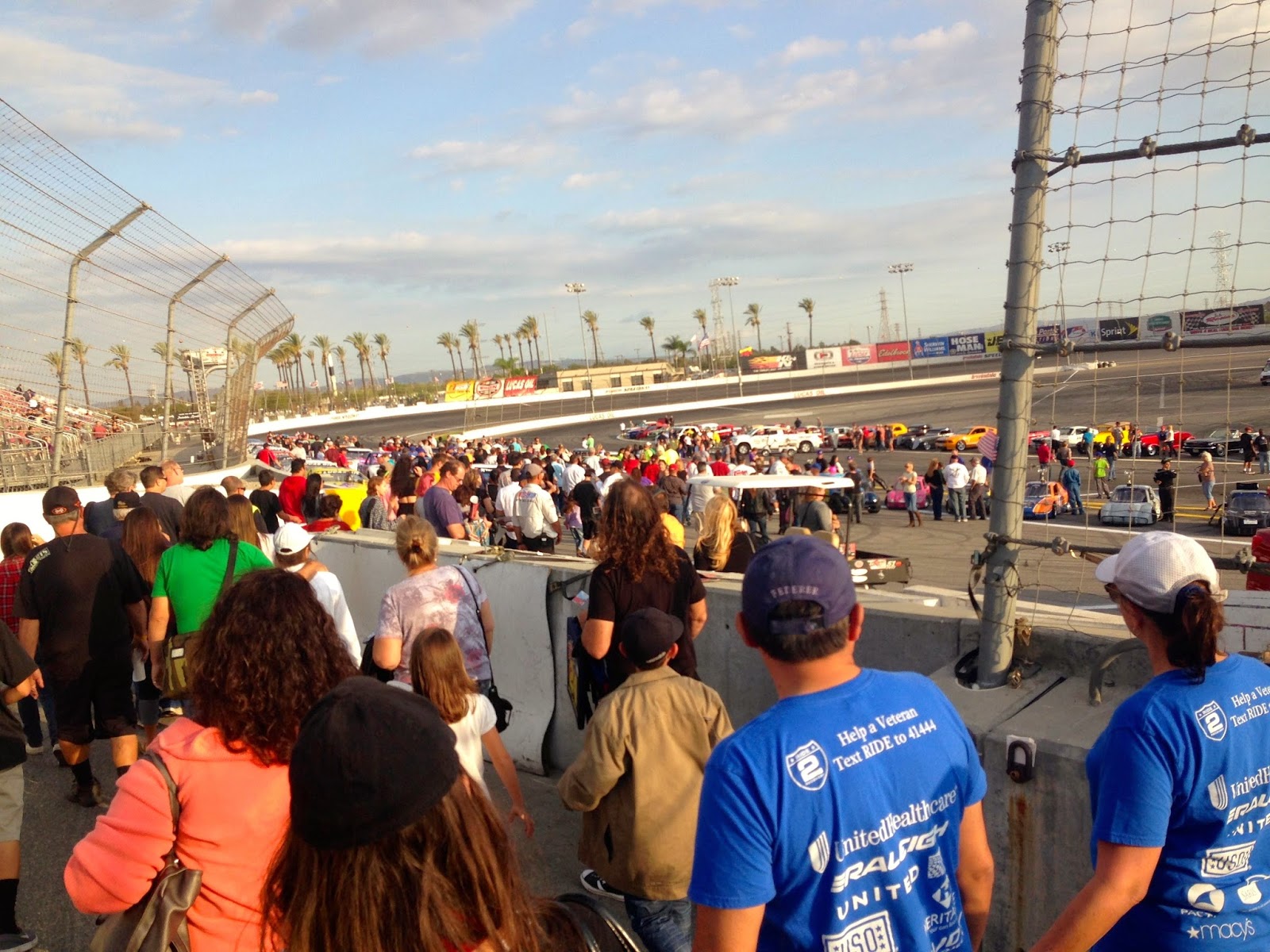 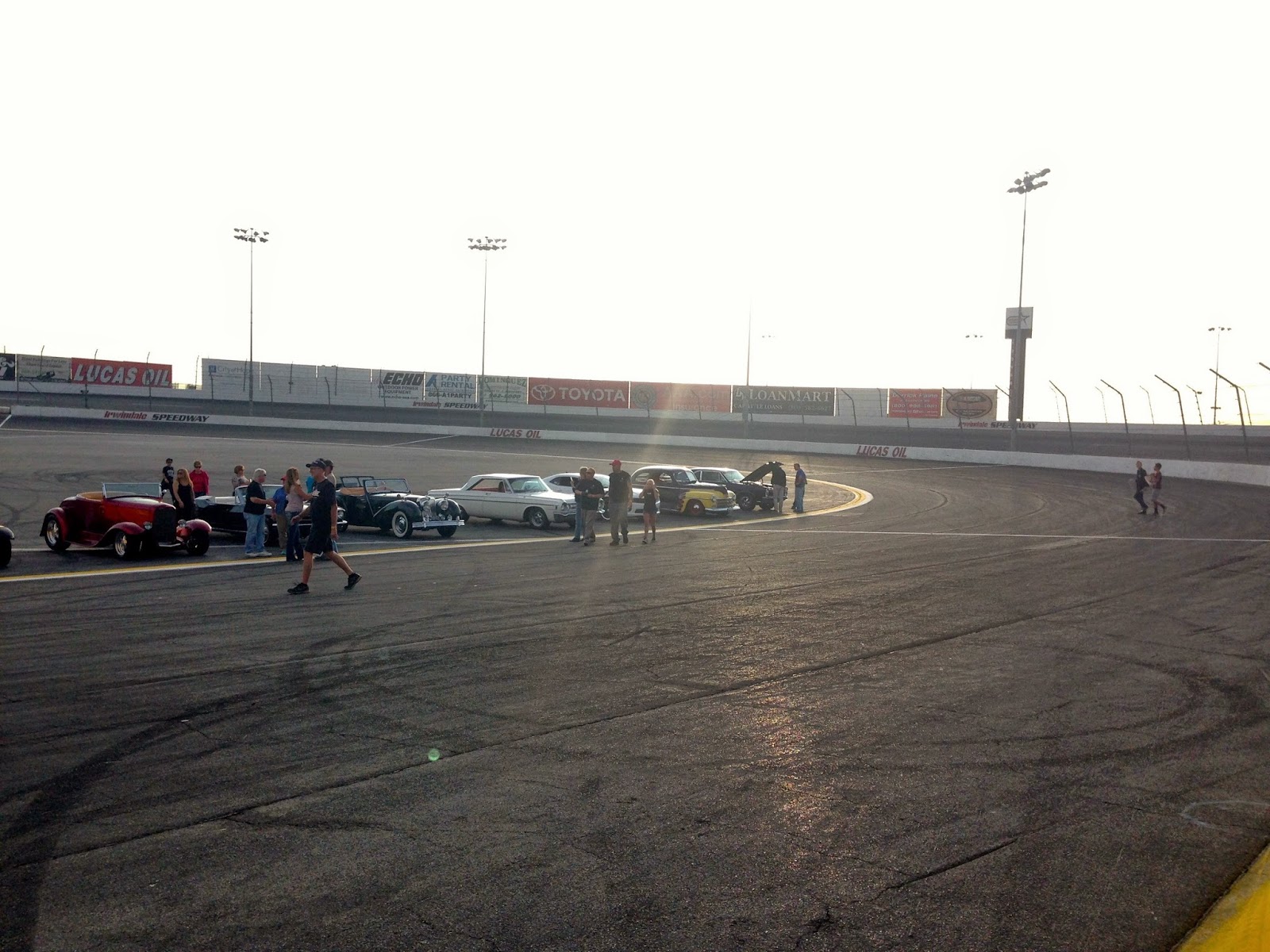 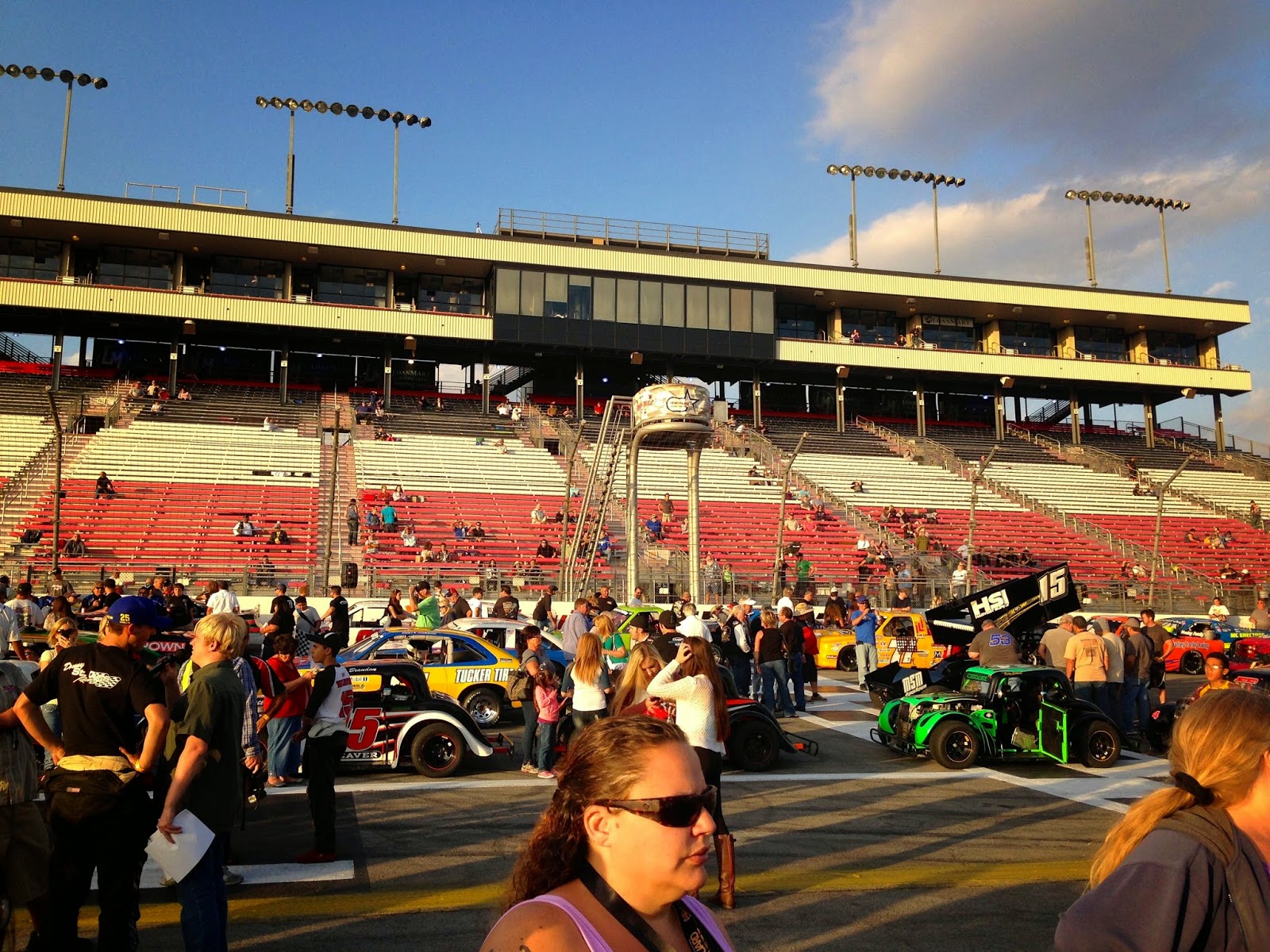 lilcee noticed the majority of people heading in a specific direction, so she steered us towards the crowds.  we joined the growing line and hoped that we were in the right place. 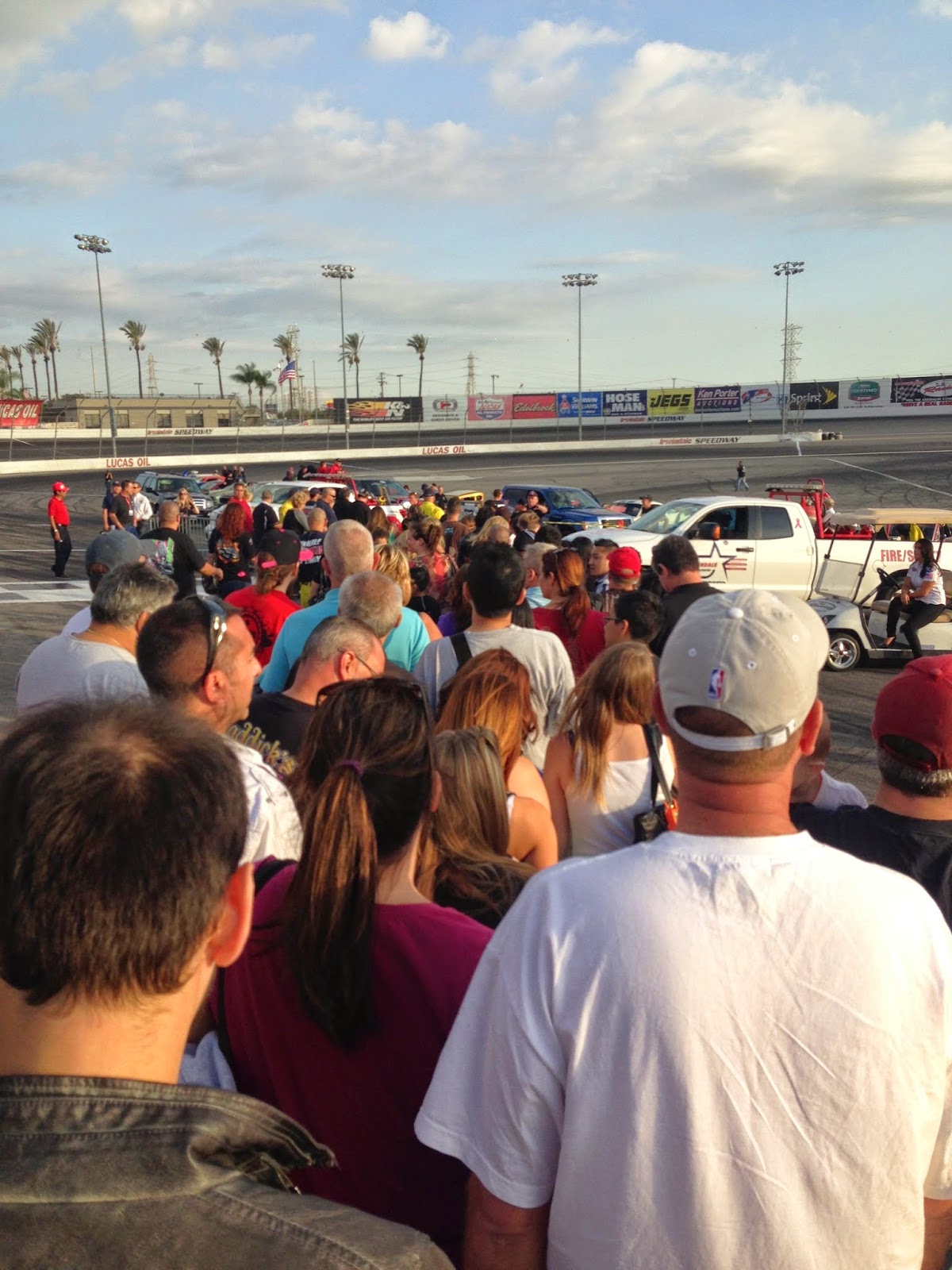 just in case, the bean and i left them in line and took a walk up towards the front to see what there was to see.  and sure enough...there he was, sitting at the very end of the table all decked out in his racing gear and sporting an uncharacteristically shaved head. 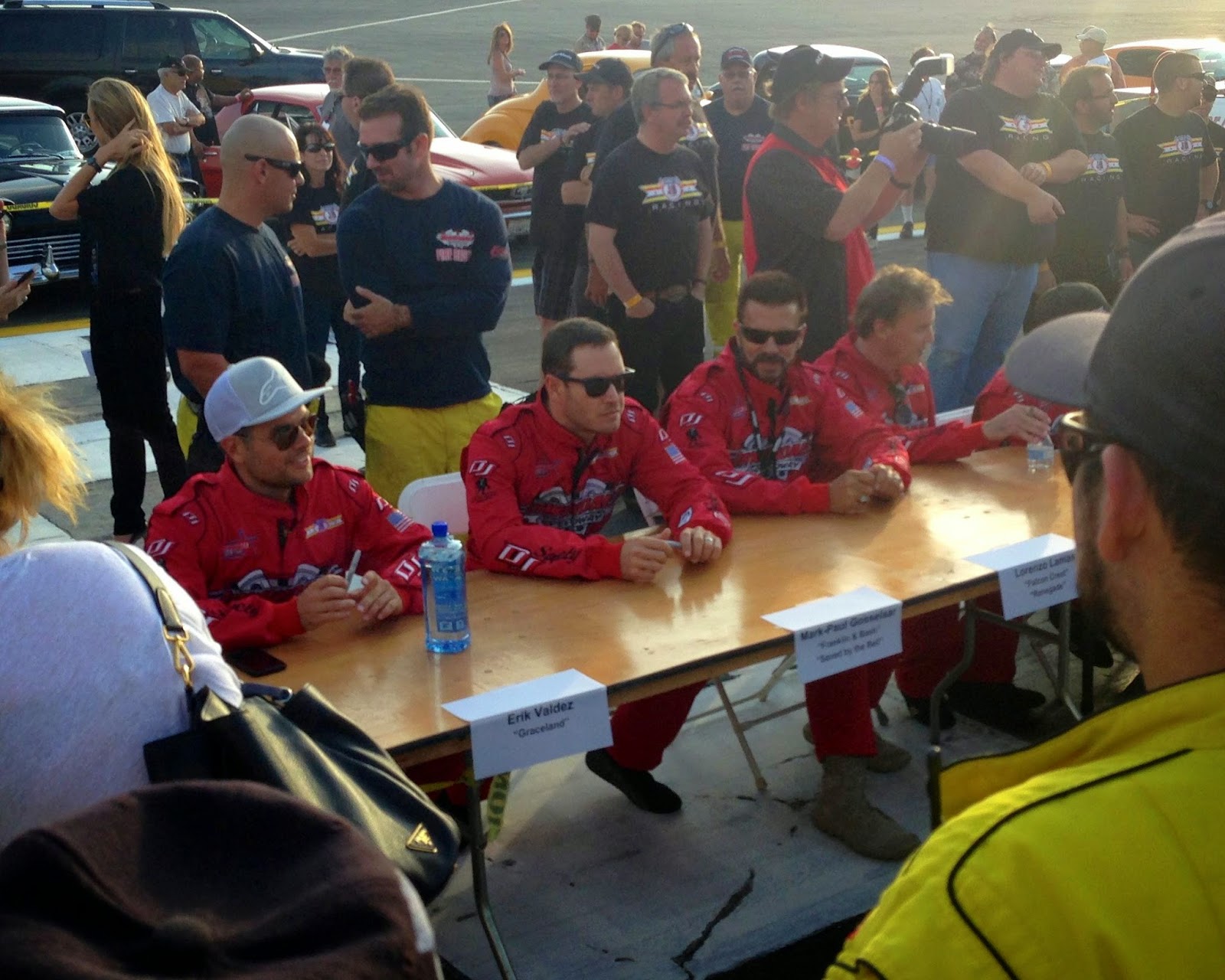 as we went back to rejoin our friends, we noticed that the line had gotten crazy long behind us. 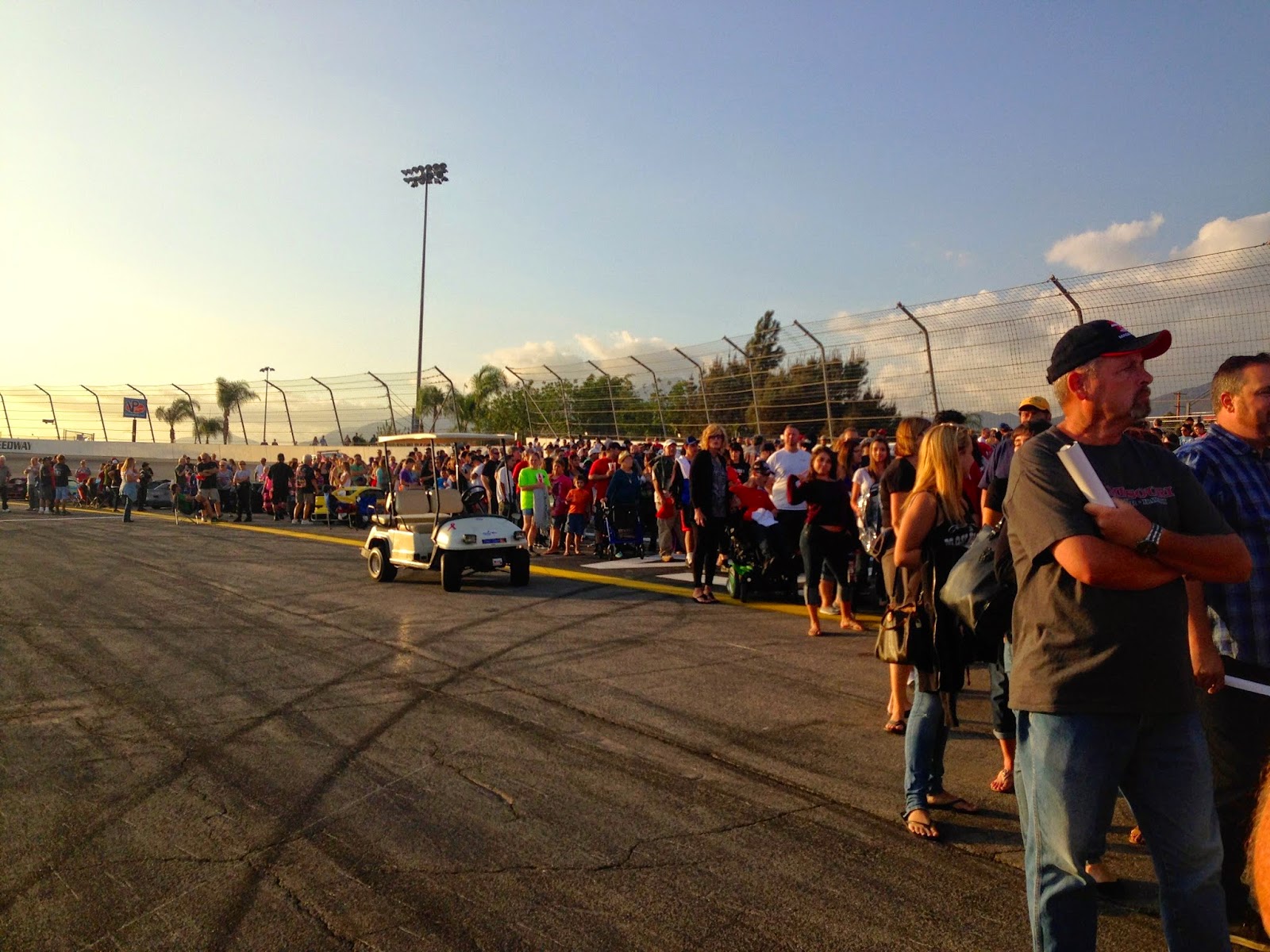 about half an hour later, we overheard the announcer who was droning on about this and that say something about how long the autograph line was and that there was a good chance that not everyone would make it up to the table.  after all, there was a race to prep for.  luckily, we were close enough that we knew we'd get our turn, but how much would that have sucked?  ooh, i'd have been heated.

as we got near the front of the line, we chatted up the guy who was controlling the flow of people.  while it's always fun to meet celebs, our main focus was meeting mark-paul.  and it would have been so awkward to just walk past the others who were sitting there greeting fans and whatnot.  like corbin bleu, formerly of "high school musical" and "dancing with the stars": 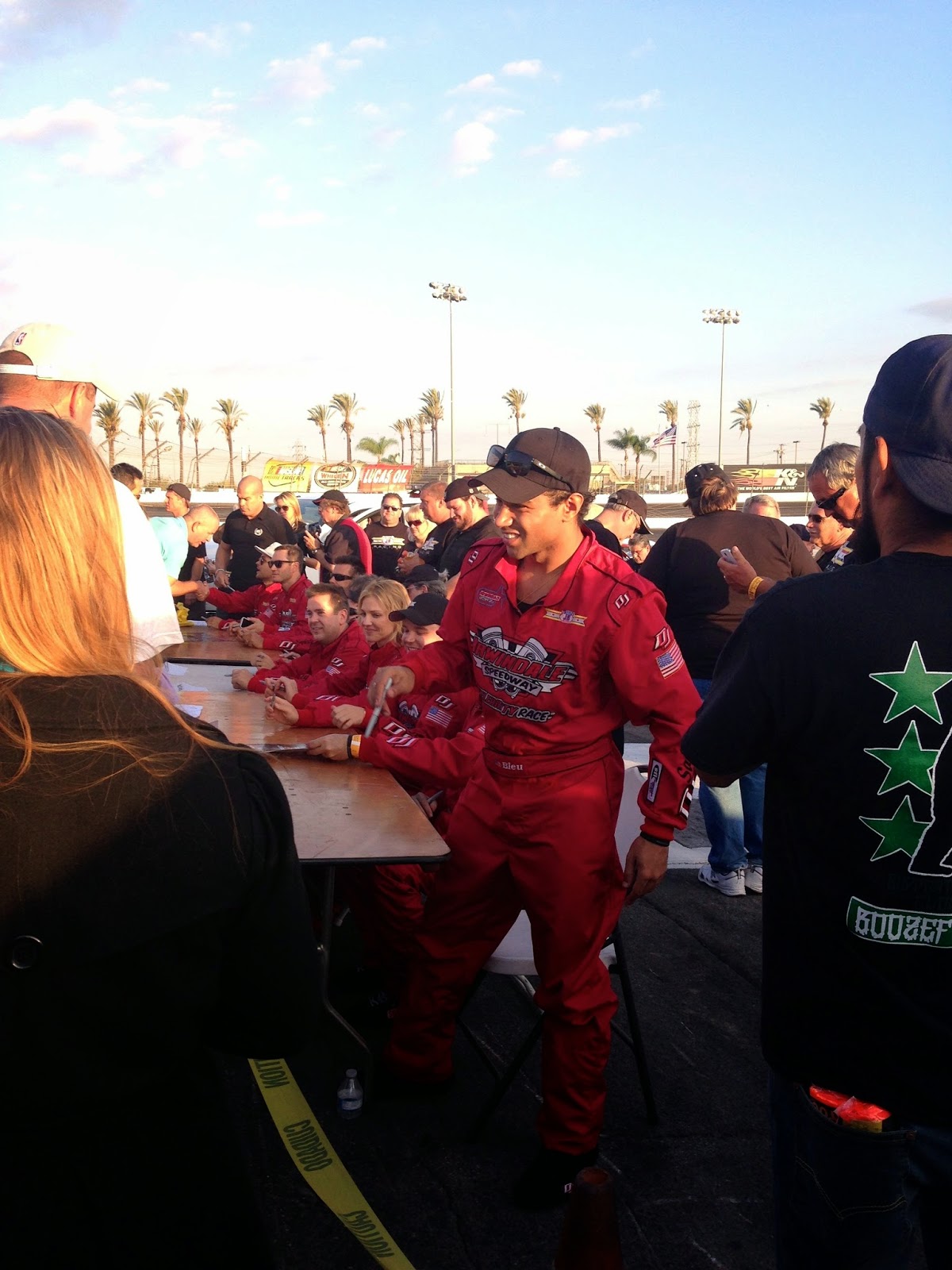 also, here's a really bad shot of nathan kress, formerly of "iCarly" and also the semi-recent film "into the storm."  i think i've mentioned that we used to go to the same church as him and his family - his dad and brothers were part of the group that traveled to zimbabwe with the hub so many years ago.  that was the same year that we hosted a thanksgiving dinner for the entire group, including nathan.  anyway, i tell that story because the teen and i joke to each other whenever we see him - "he sat on our toilet!" is pretty standard.  i'm sure he wouldn't remember it, but it always cracks us up. 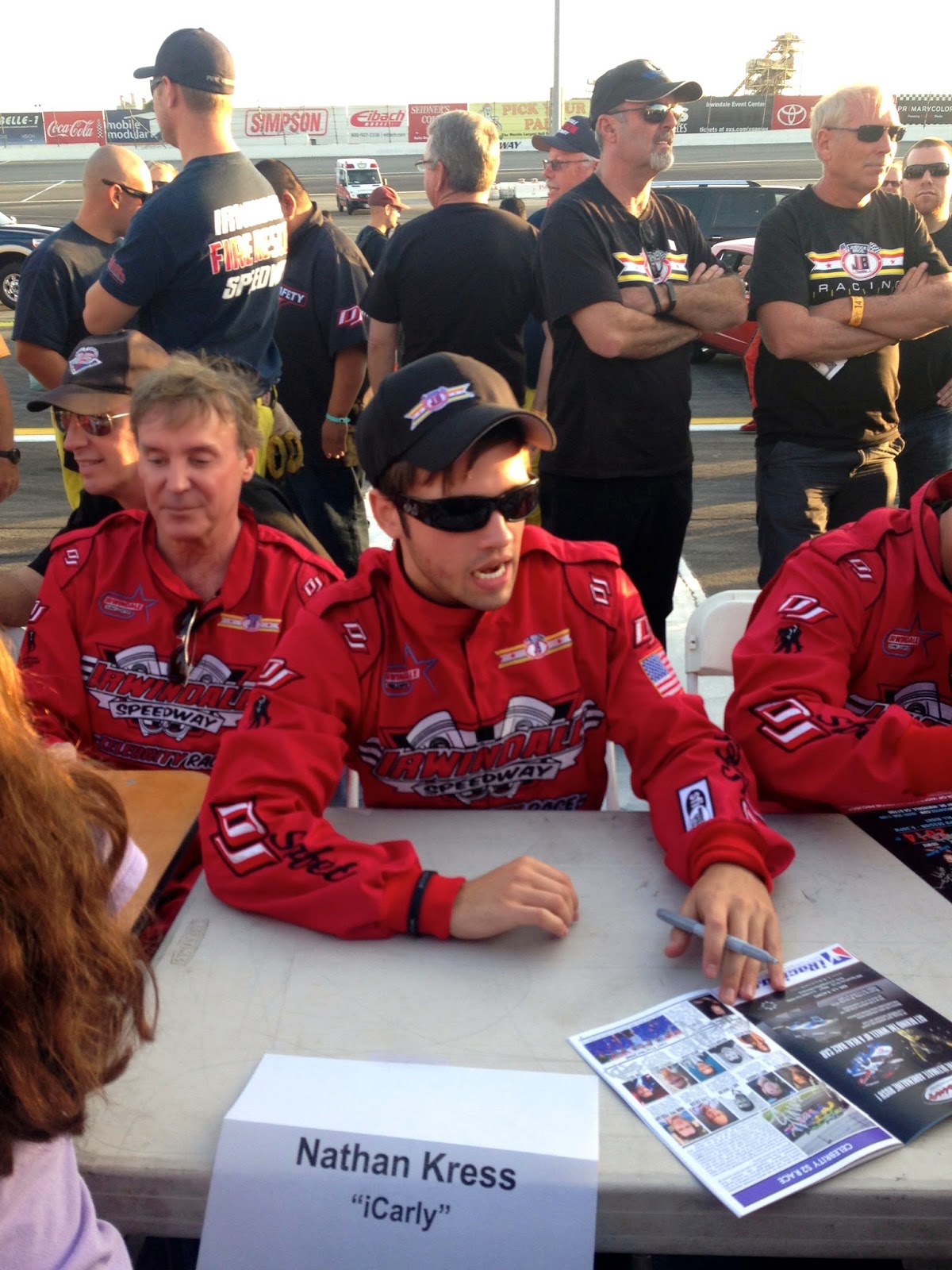 and sitting next to mpg was lorenzo lamas.  you may remember him from "grease" as sandy's brief fling, tom.  or from his role in that old nighttime soap, "falcon crest."  i personally always think of his douchey stint on a show called "are you hot?" where he and his fellow panel of d-list celebrity "judges" would literally judge poor suckers who walked across their stage based solely on their appearance.  he thought it was great fun to use a laser pointer to show people where their physical flaws were. it was gross and sexist and annoying.  also, it was the first time i ever heard about thigh gap - i had no idea it was considered unsexy when your thighs touched each other.  haha!  anyway, i gave him a quick glance before we moved on. 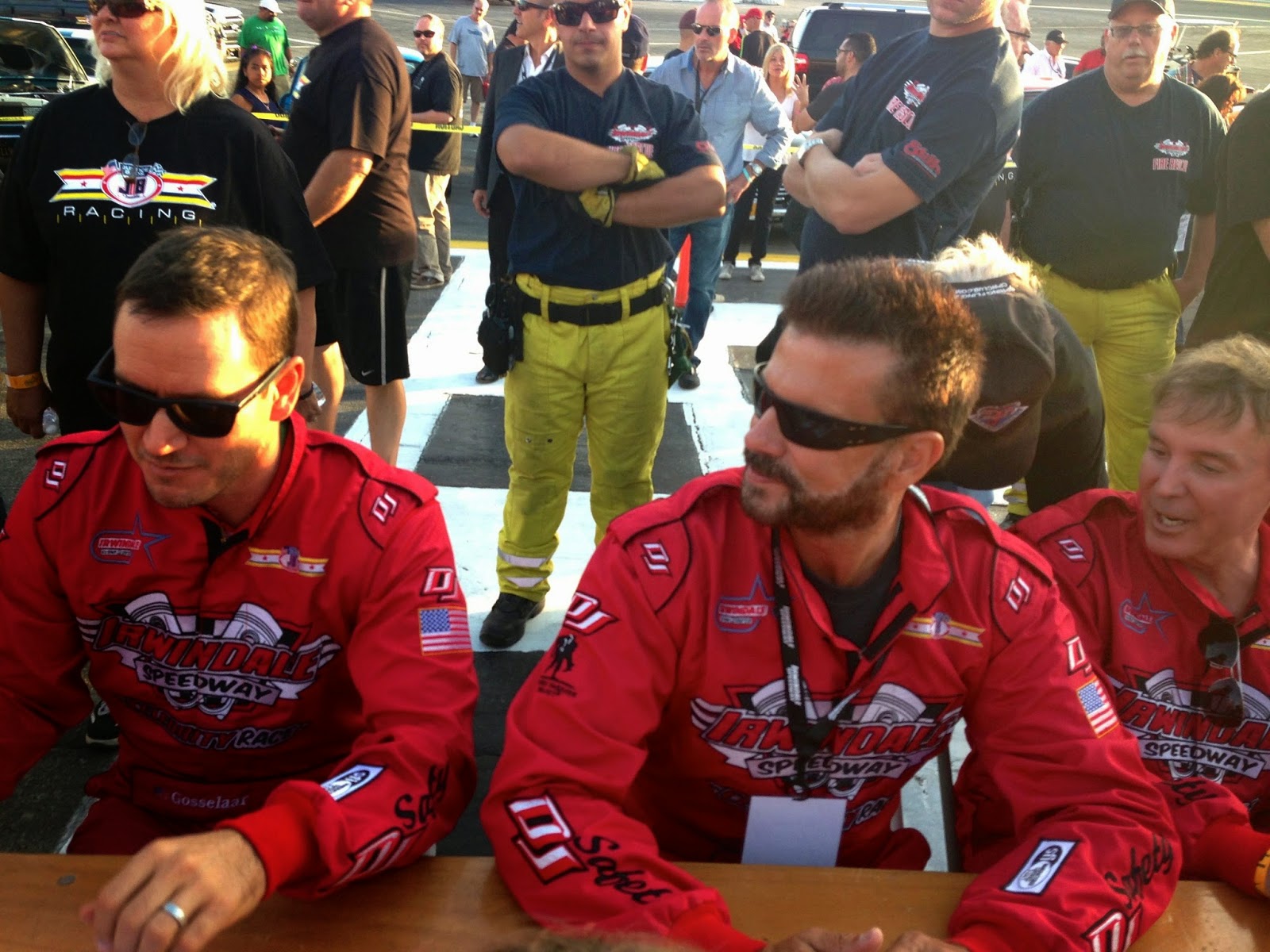 then the moment was upon me - and i tell you, it was all kind of a blur.  i remember introducing myself to him, and then i nonchalantly mentioned the oh-so-brief twitter exchange we'd had.  and because mine had been the only tweet he'd replied to, his eyes lit up in recognition and he said something like "oh yeah!  hey!  thanks so much for coming out, i really appreciate that you're here!"  and then i melted into a big ass puddle and beamed at him like a puppy who'd pissed in the right spot.  as we posed for a picture, he said "oh!  don't you have a concert to go to right after this, too?"

you guys.  i hadn't even mentioned the concert in that tweet that he'd replied to.  i posted about it in a separate tweet like DAYS later.  so you know what that means, right?  he totally read my twitter timeline.  squeeeeeeeeeeeeeee. 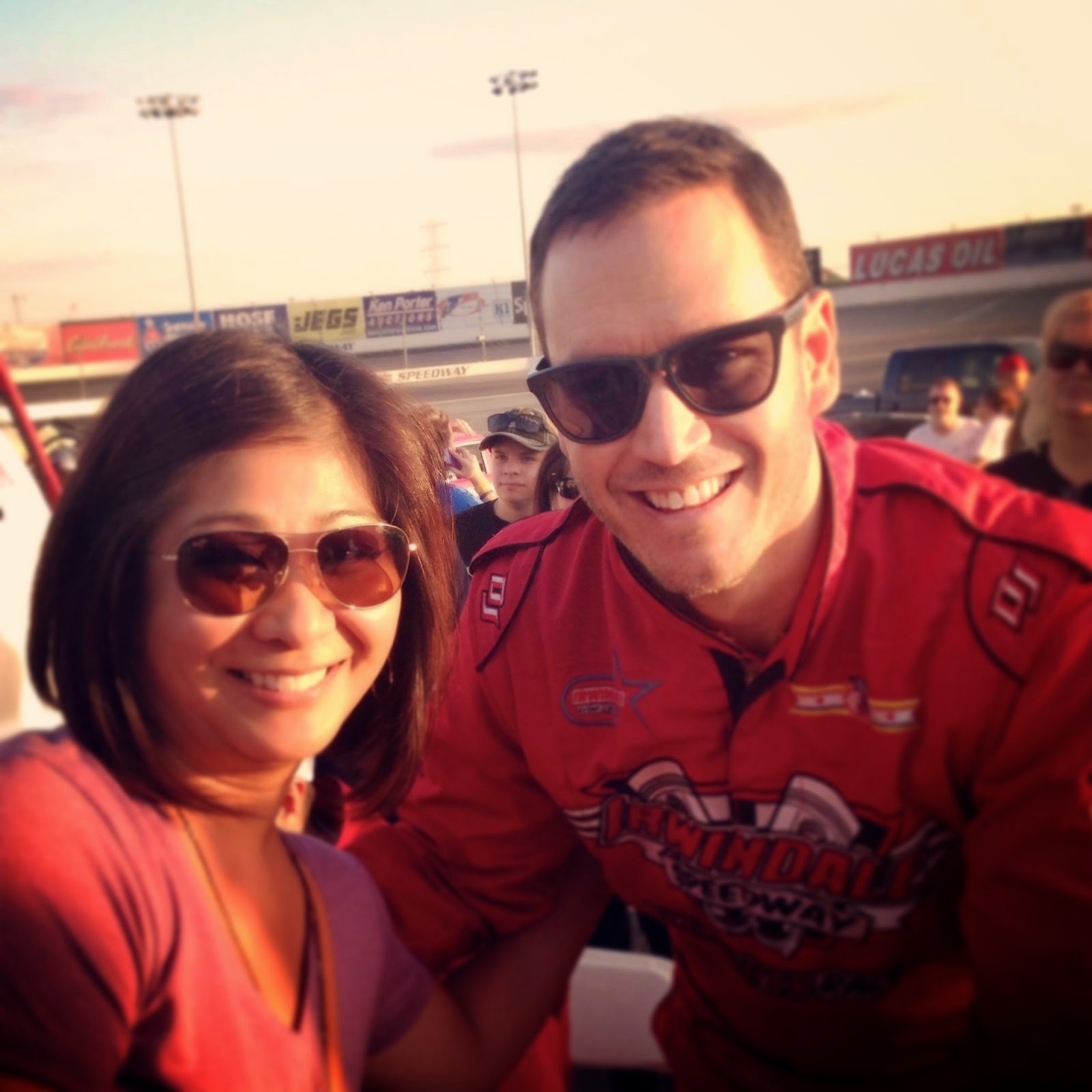 we all took turns taking pictures with him, even the girls. 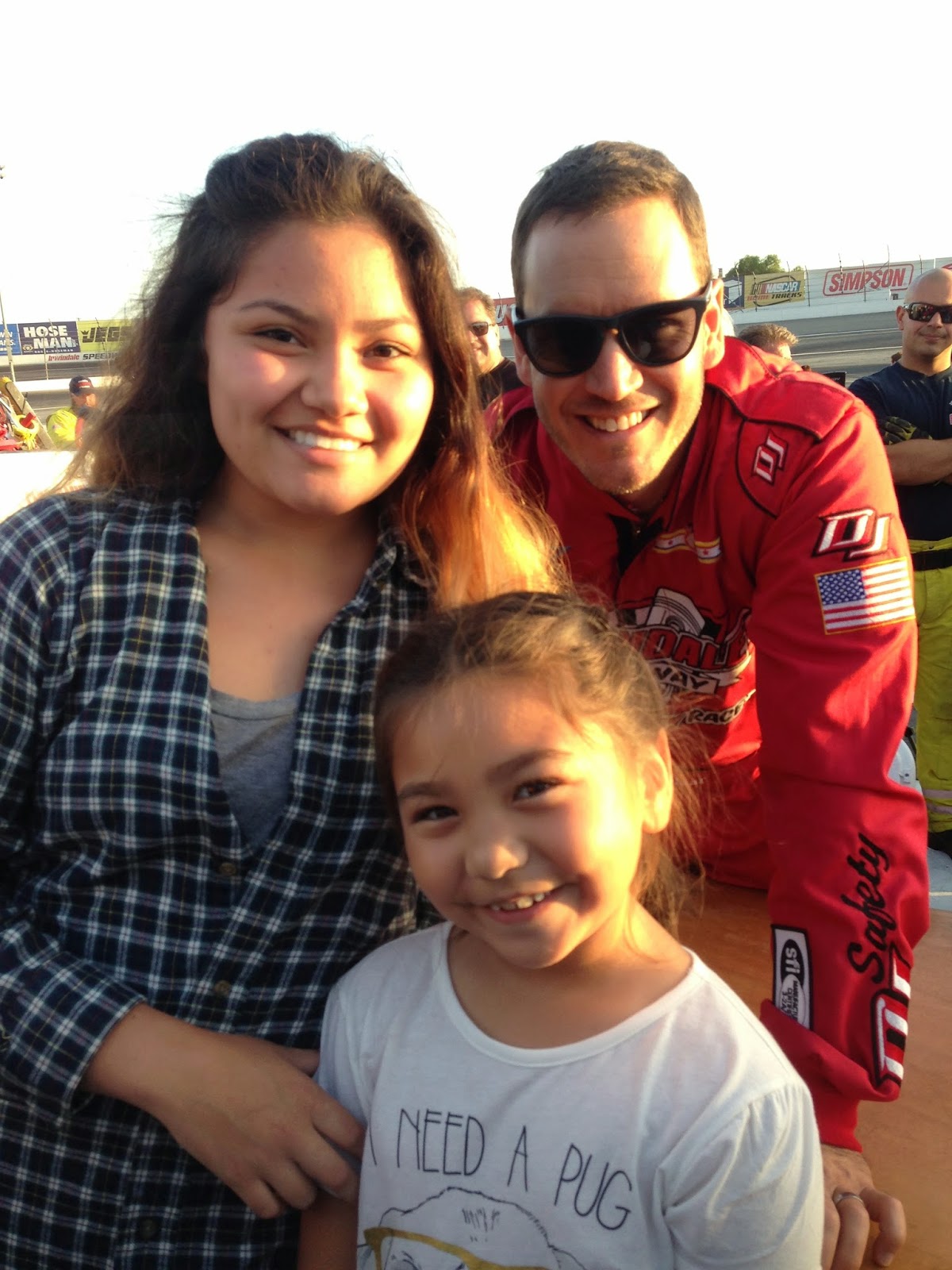 he thanked us one more time for coming out, and then that was it.  next to him, though, was erik valdez - he had a role on our beloved "general hospital" for awhile, and the teen and i had been trying to remember his storyline.  this, of course, gave me a great topic to ask him about, and he was really friendly and totally laughed as he realized that even he didn't remember the answer to the question we had. 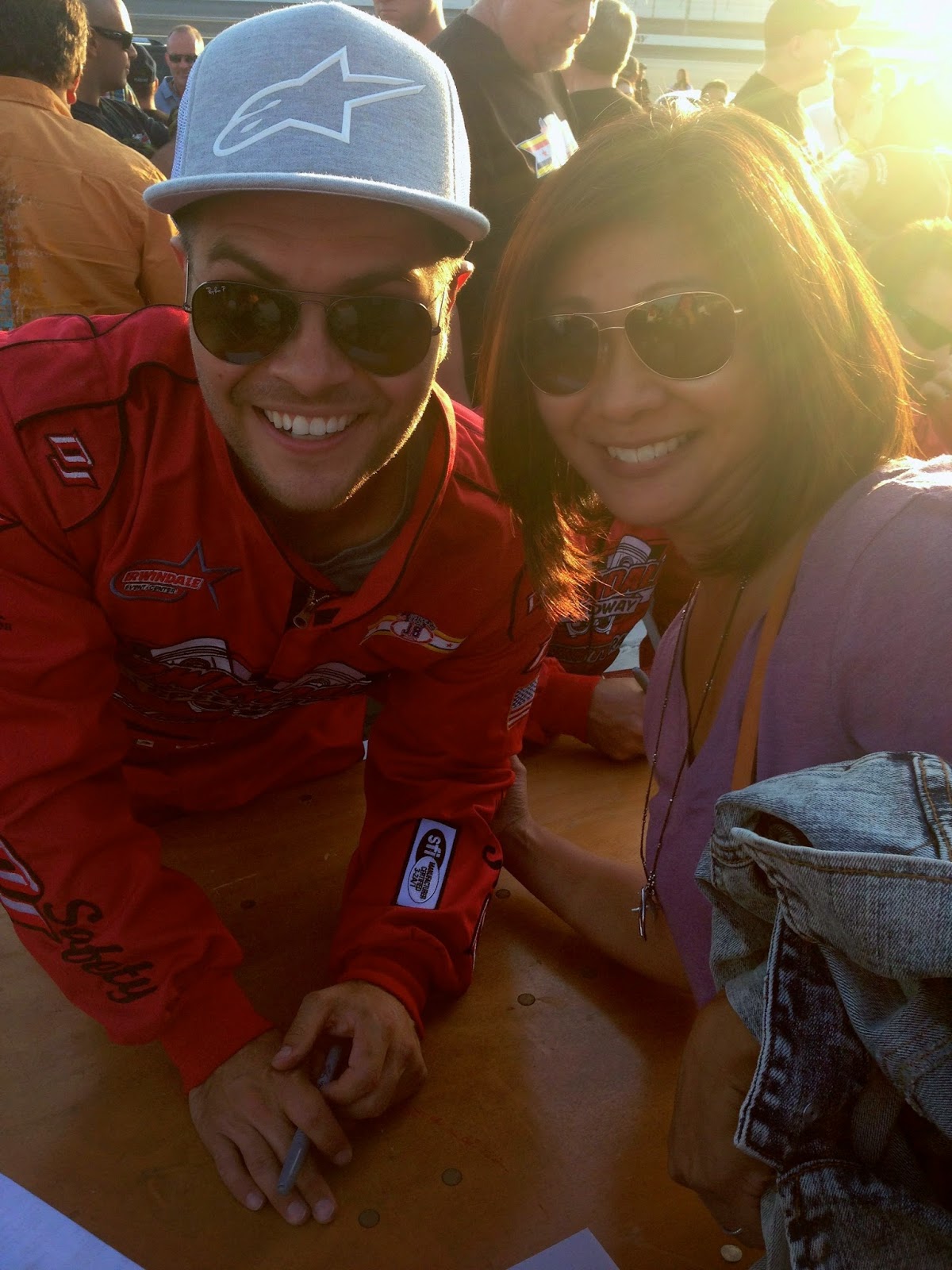 the bean melted into a giant puddle of her own at the sight of this adorable, extremely well-behaved pomeranian.  at first, we thought it was boo, "the world's cutest dog," but it turned out to be "jiff the dog," who apparently has appeared in katy perry videos and also holds the guinness record for fastest 10-meter run on hind legs and 5-meter on front paws.  i'm cracking up just typing that out. 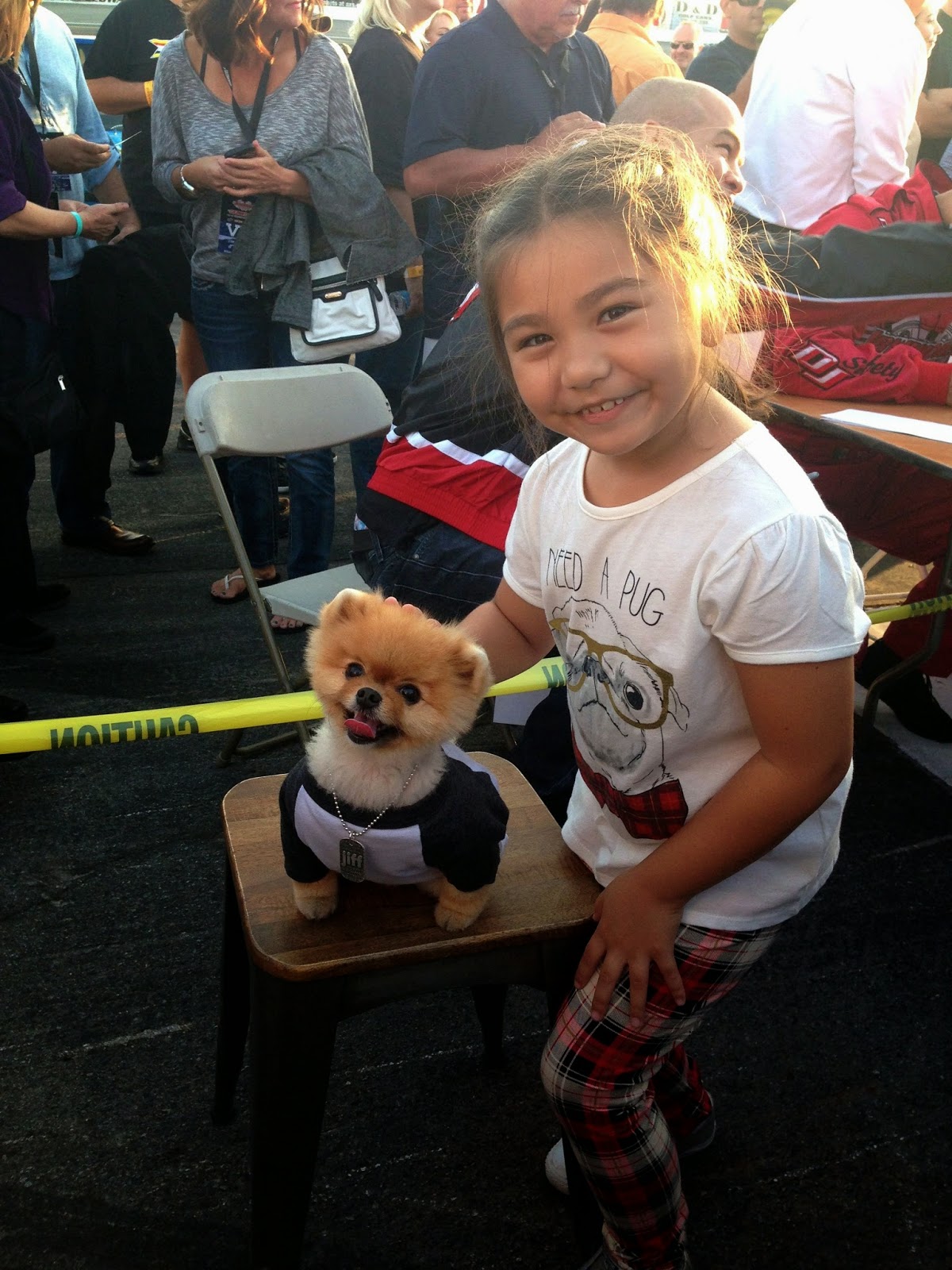 then it was time to head to pomona for this: 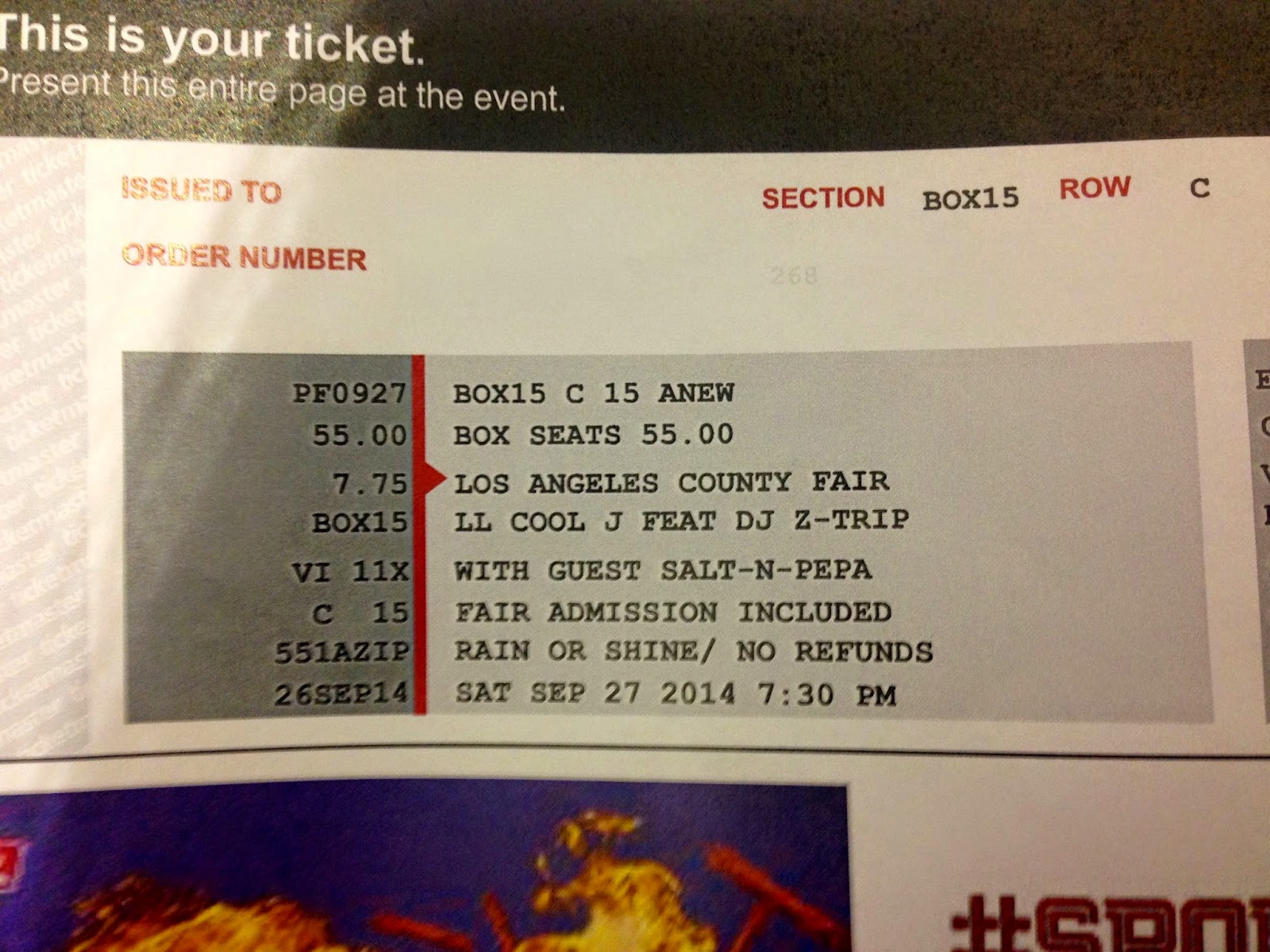 while our seats offered a more obstructed view than those the teen and i'd had for jason derulo, it was still pretty good. 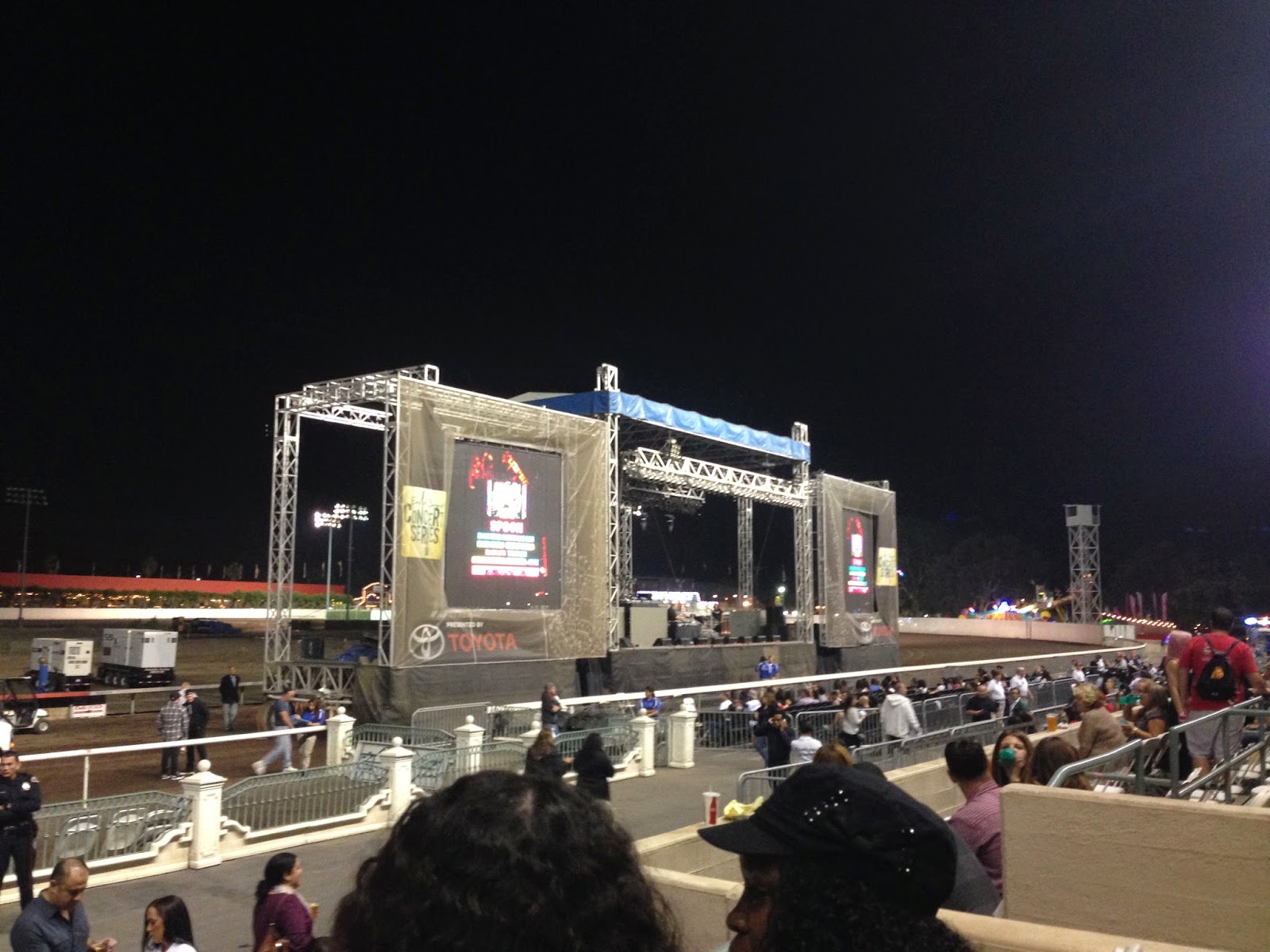 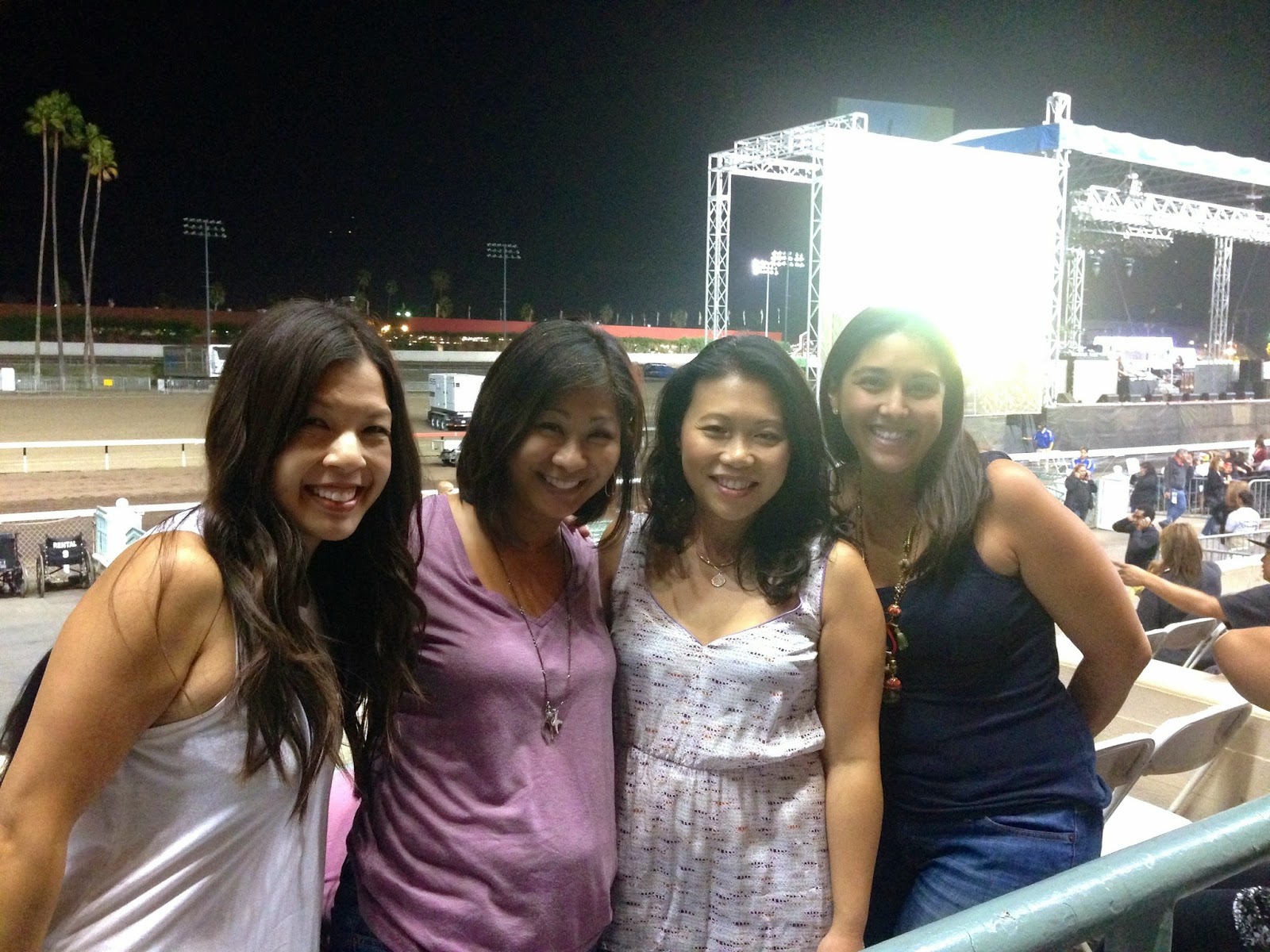 not long after we'd gotten settled, this RV rolled in, and the crowd went wild as salt & pepa and spinderella emerged from it, waving happily at us. 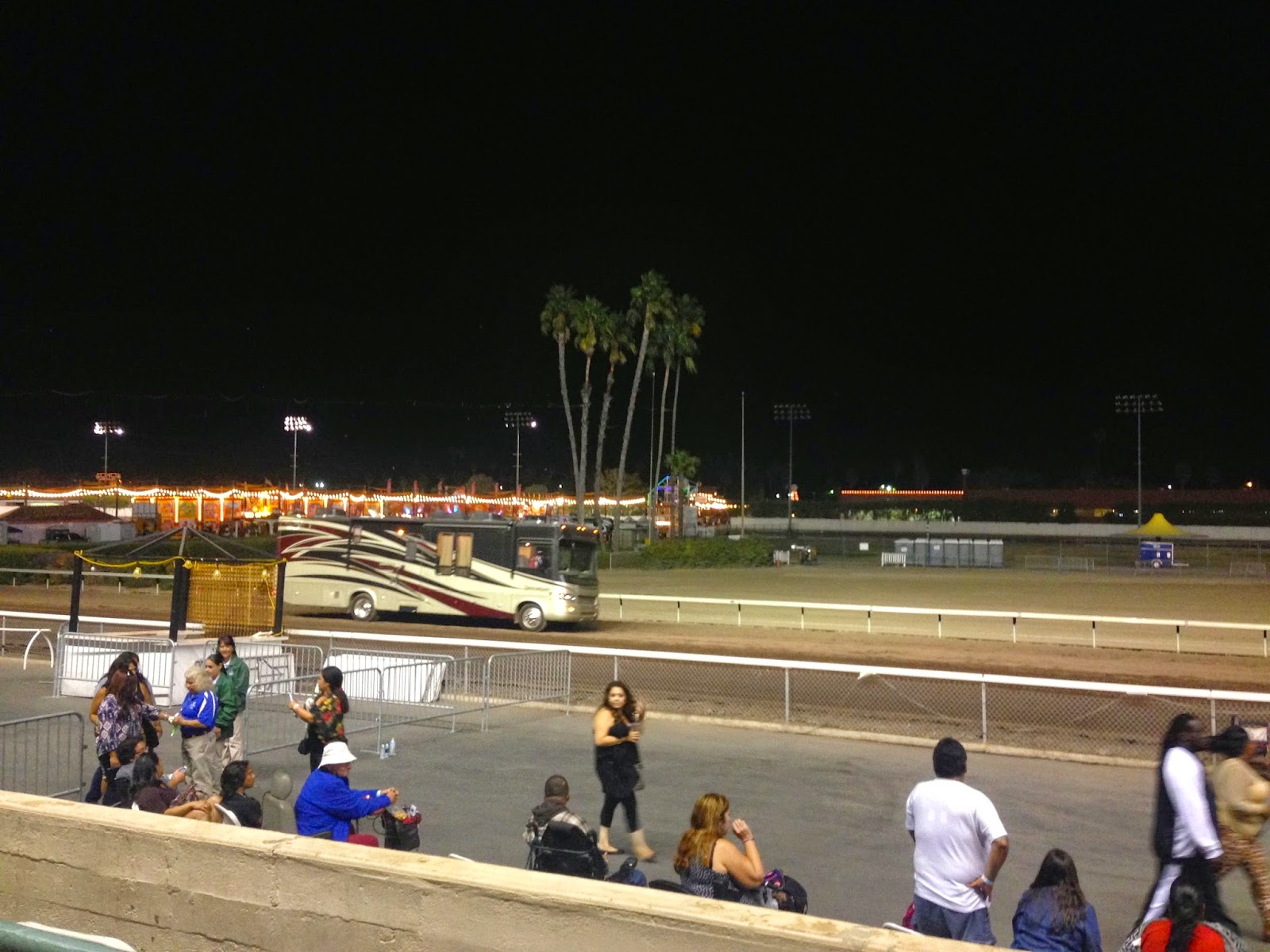 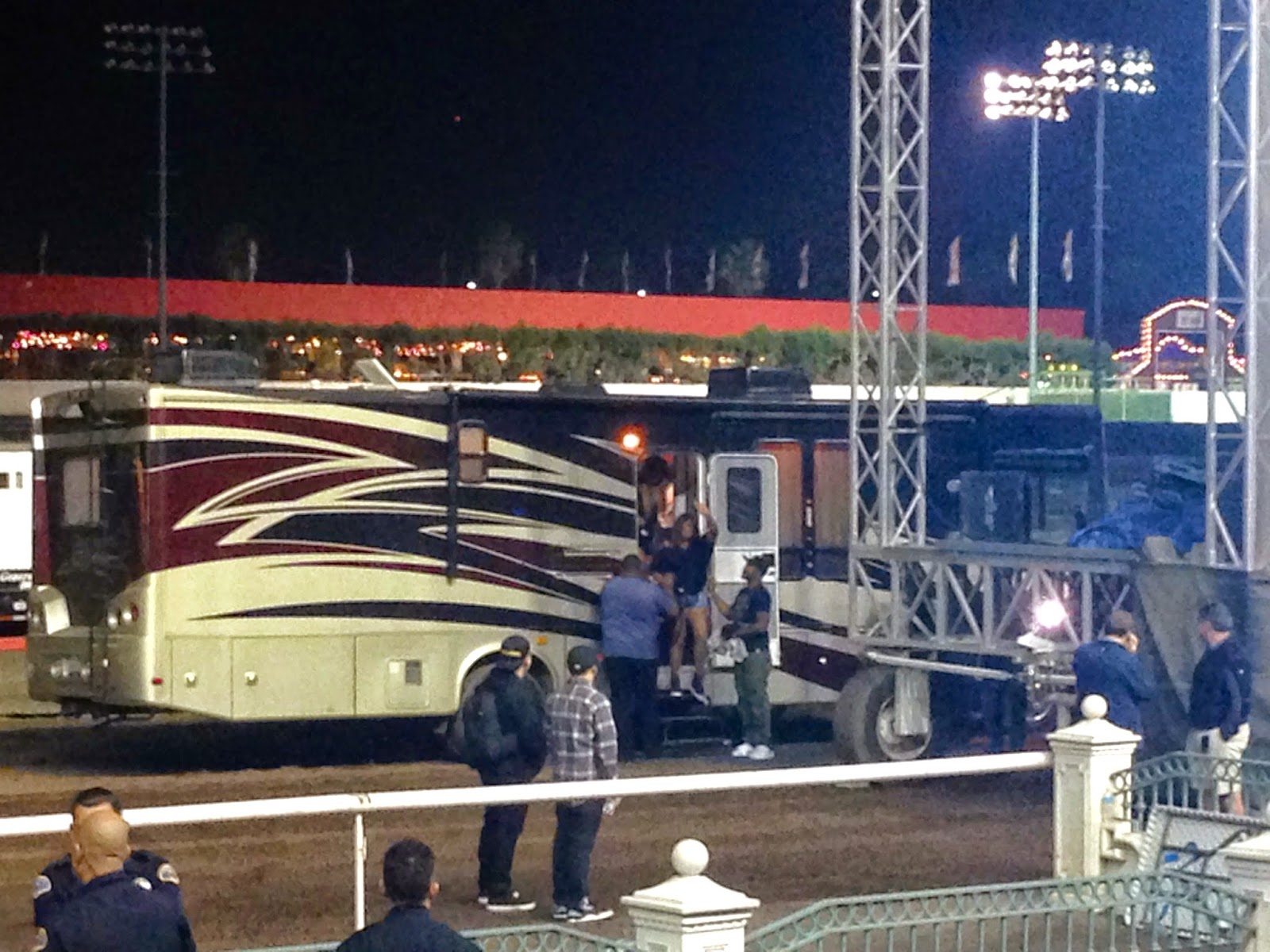 they put on a really, really fun show.  it was a fantastic 80s/90s dance party from beginning to end as we all sang along to their songs and the others from that era that they played for us.  they did a phenomenal job of getting us all warmed up and excited for the main event.  they wrapped it up with the very best song of 1987 - "push it." 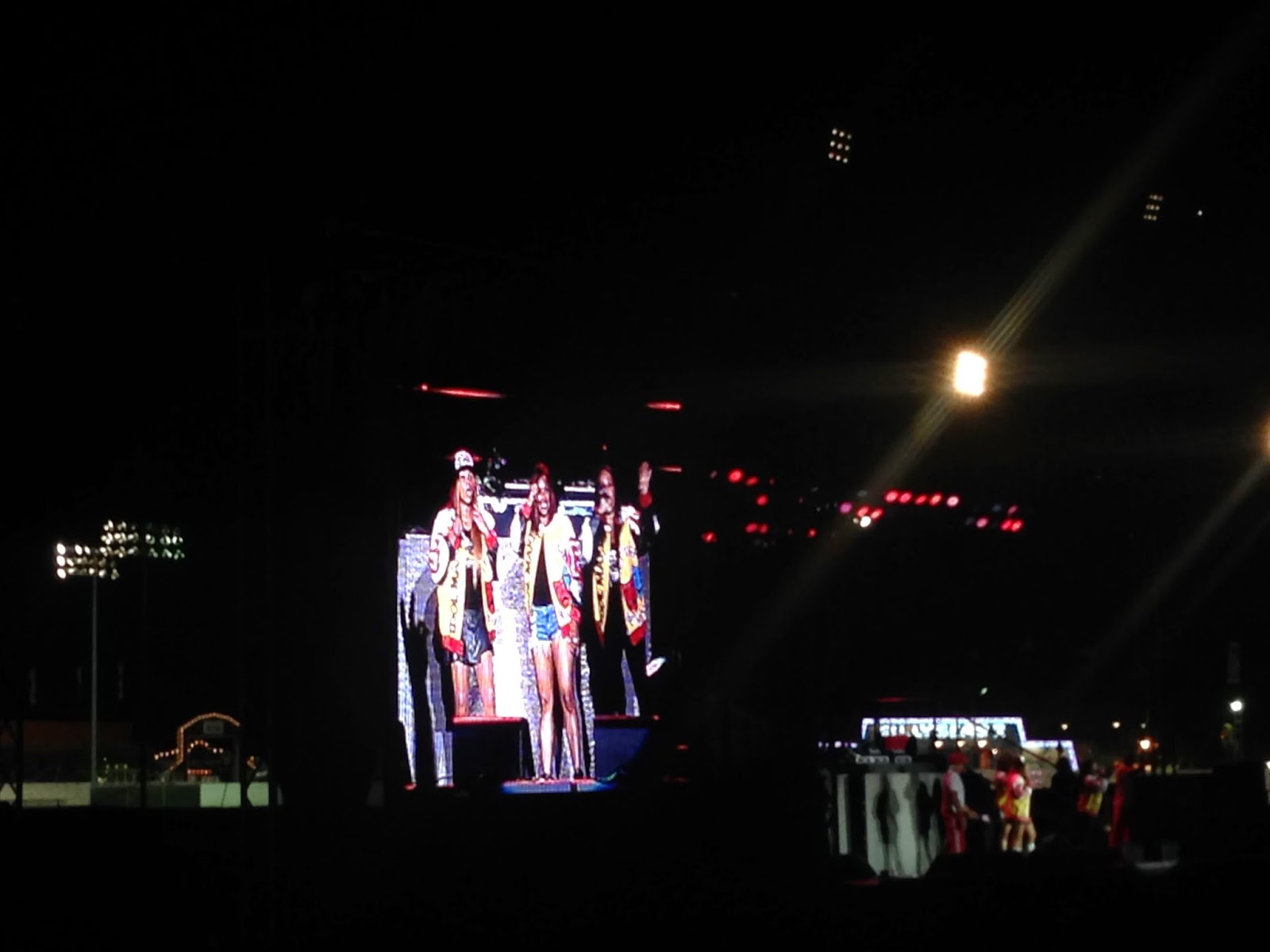 we all got a chance to catch our breath and sit down for a few minutes before ll made his entrance.  the crowd went absolutely freaking bonkers. 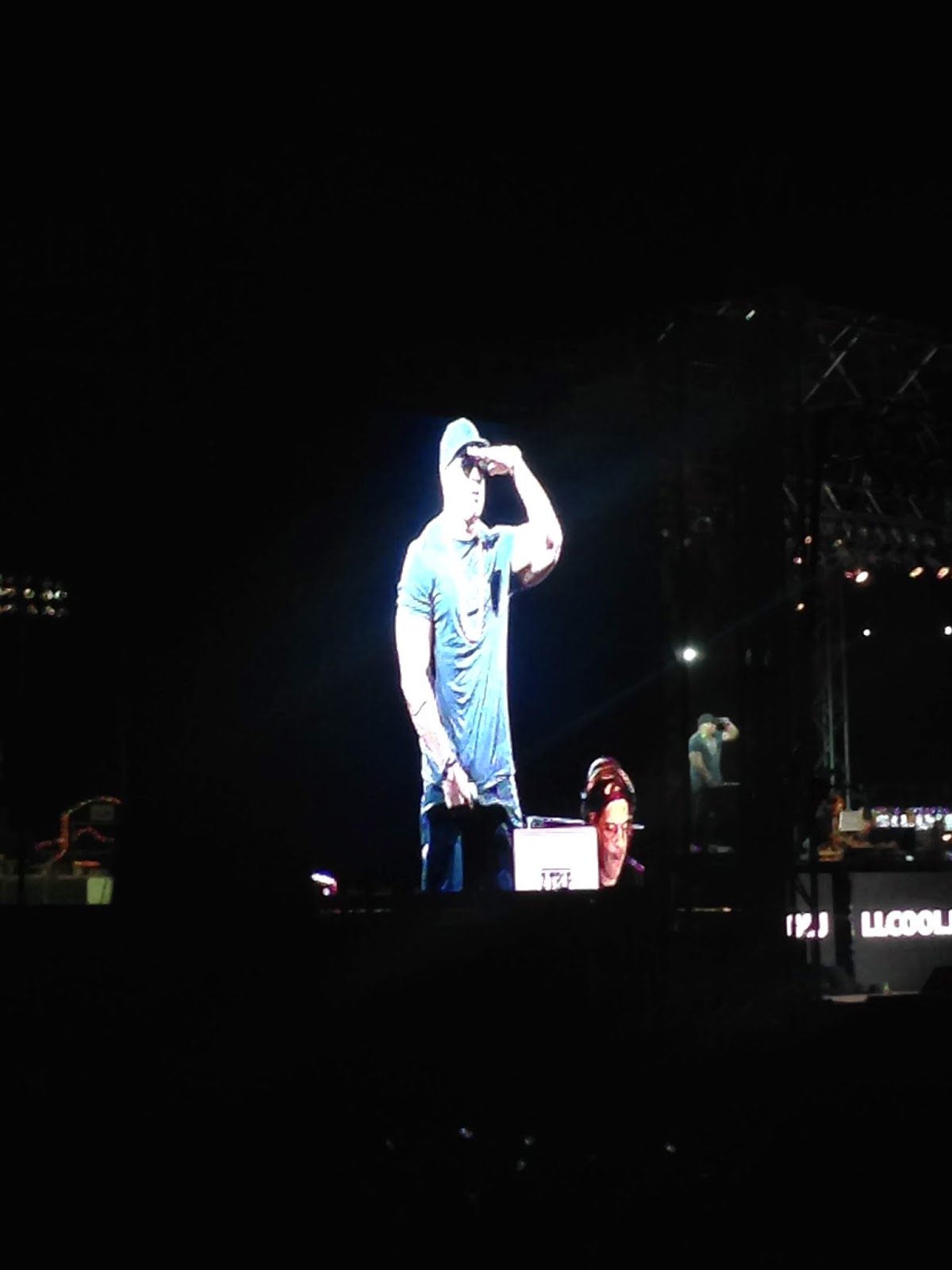 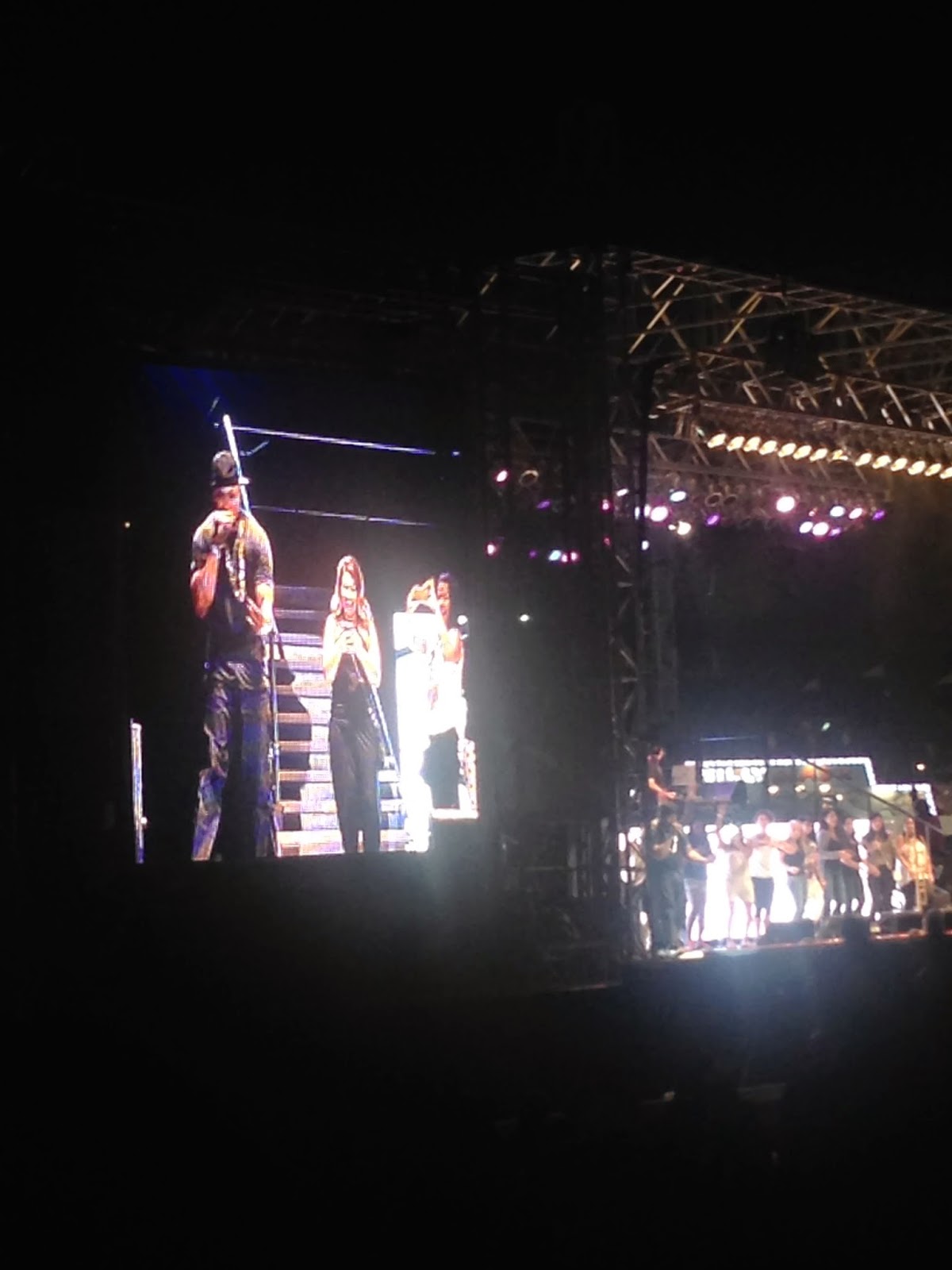 it's funny to watch him in rap mode again, after seeing him in various roles in movies and tv, even hosting awards shows here and there.  he's built such a great career in different areas of entertainment that sometimes you forget that he's basically a pioneer in the genre of rap.  talk about old school - he busted out songs like "round the way girl," "i need love," "goin' back to cali," and "rock the bells." 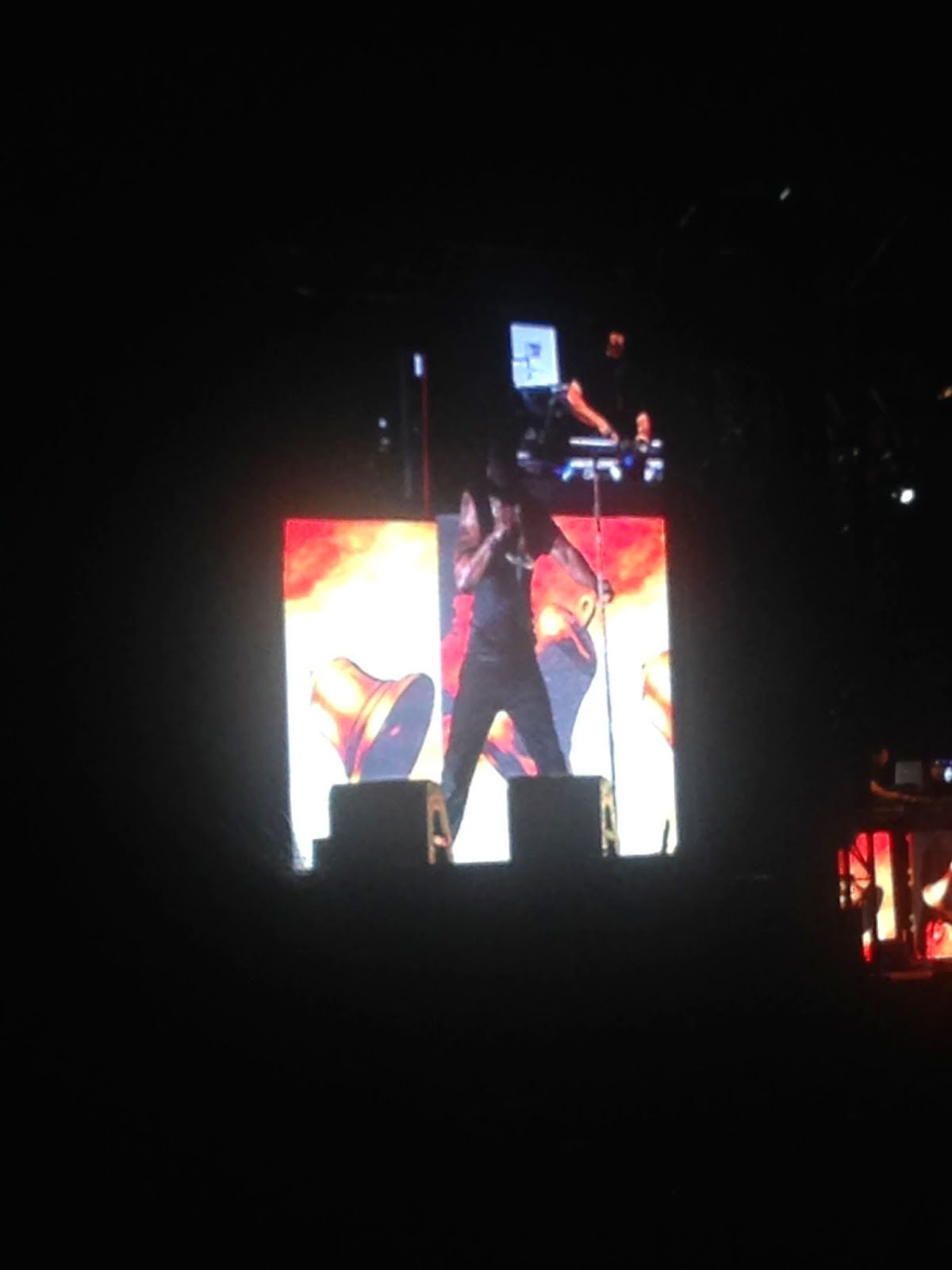 after we said goodbye to kelley, who went off to meet up with her family before heading back home to san diego, we decided to grab ramen burgers.  sure, i'd just had one a few days prior.  but i mean...it's that delicious.  lilcee and DG concurred. 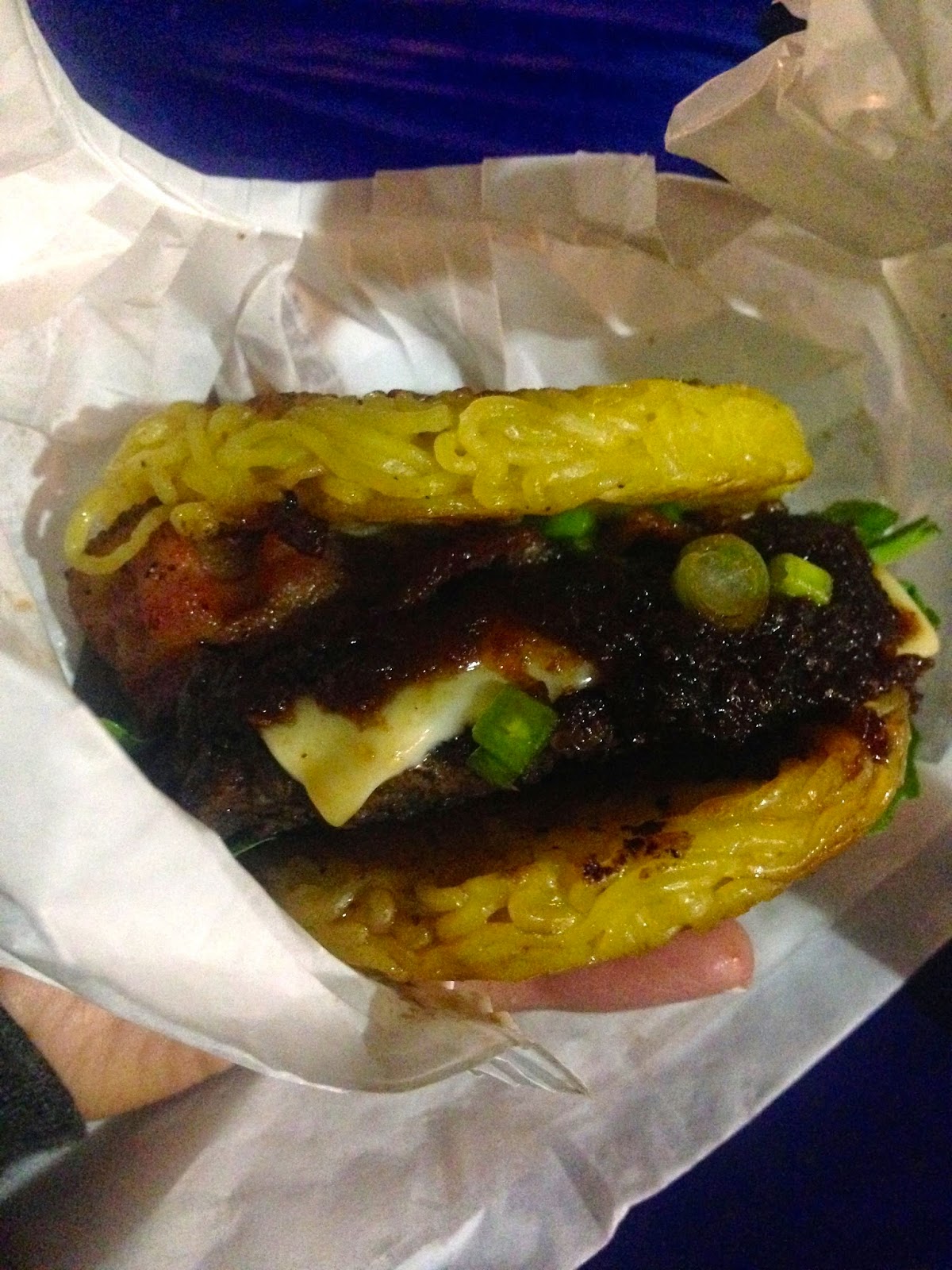 because we were right next to the shopping place - several buildings chock full of vendors hawking everything from jewelry to tv service to almost every as-seen-on-tv product you can imagine - we decided to go in and check it out.  i'd actually been eyeing a cool-looking mop system when i went with the teen, but the guy at the booth couldn't be bothered to even acknowledge me.  but this time, we were treated to a full demonstration of all the things the mop could do.

yes, i realize how lame this all sounds.  i mean, it's a mop.  for cleaning.  one of my least favorite things to do ever.  and yet i have to do it, and if there's something that's going to simplify my most hated chore of all - cleaning floors - i'm all over it.

the demo did its job.  very well.  and with a great deal thrown our way, all three of us fell for it.  hook, line, sinker. 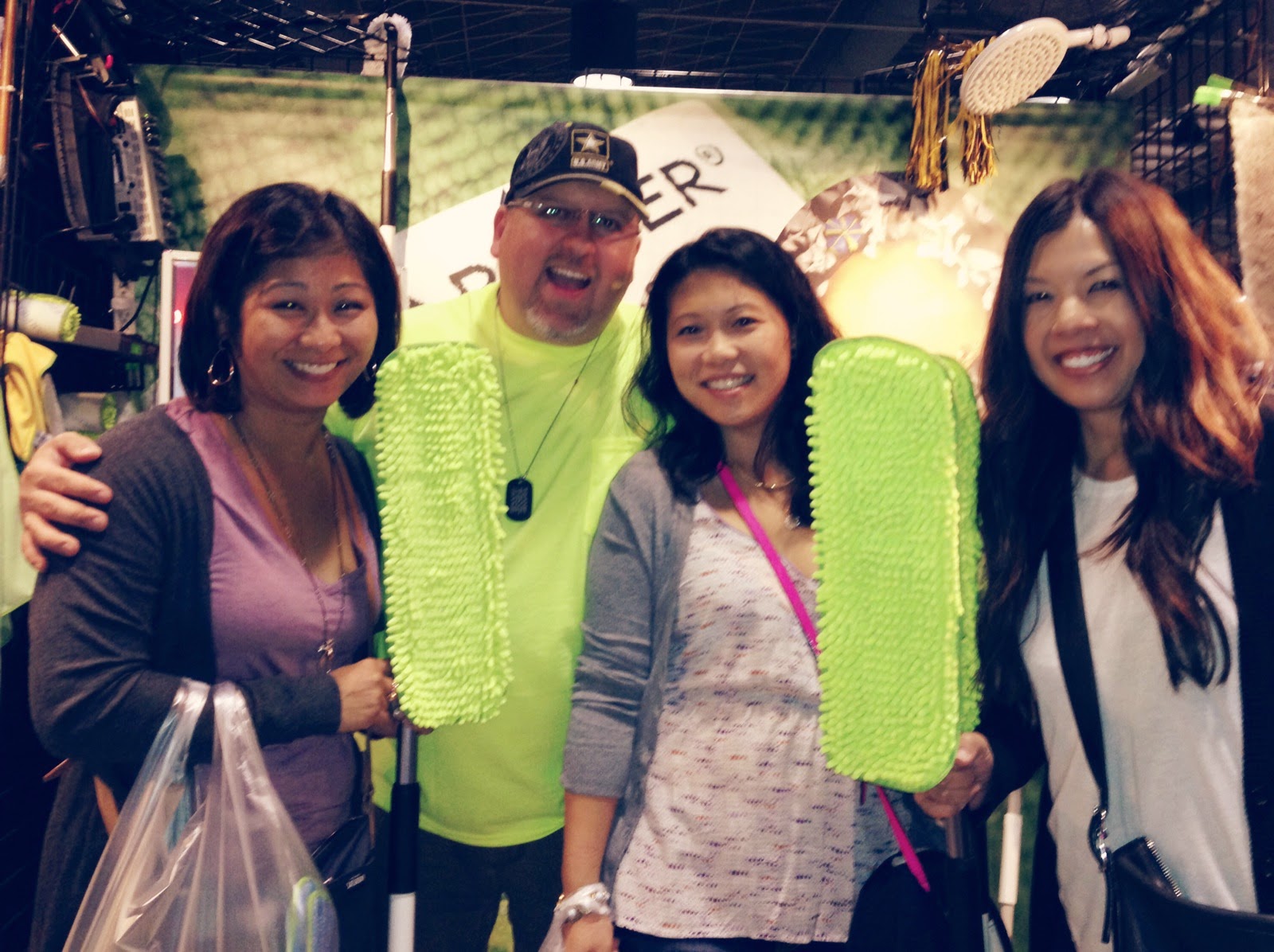 whew.  what an evening!  started off with zack morris, segued into salt & pepa, transitioned to ll cool j, and ended with...a mop.  only us, man.  it's always an adventure.

Email ThisBlogThis!Share to TwitterShare to FacebookShare to Pinterest
Labels: celebrity sightings, going to the fair