so when my co-leader and i sat down at the beginning of the girl scout year to map out what we wanted to accomplish with our girls, we decided that we'd have them do a fun gift exchange at christmastime.  the only rule?  the gifts had to be handmade - no store-bought presents.  too easy.  we're girl scouts!  we have to complicate shit.  heh.

when we had the girls draw names, we had them complete a short questionnaire that would help their secret santa figure out what to make as their gift.  you know - stuff like favorite color, favorite animal, favorite character, you get the picture.  when the bean drew her name, the questionnaire she got listed "mal" from disney's "descendants" as her favorite character.  and it took her about half a minute to decide that she wanted to make a doll as her gift.

google is her friend too.  when she searched for pictures to work with, she settled on this one: 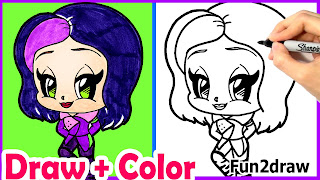 she made a list of materials that she would need, and off we went to joann's to pick it all up.  i had no idea how she was planning to create this doll, but she seemed to know exactly what to do, and spent a lot of time looking at that picture and figuring out how to accomplish her goal.  she ended up making the head first, drawing the face on it and filling it with a little bit of stuffing to make it puffy.  we tried using hot glue to assemble it the first time, but she didn't like how it felt when the glue dried.  and so she created a second head, this time using a felting technique that involved poking the felt over and over again until it was soft and plush.

then she started cutting out teeny-tiny pieces of felt in different colors to create the rest of the doll.  i just kind of sat back and watched her as she worked, and wondered how she wanted to put it all together.  she actually had this all cut out for the last few weeks, and then it sat on the table until it dawned on both of us that the party was mere days away and the project needed to be done.

in the meantime, i'd thrown out the idea of finding some themed fabric and using it to make a simple little drawstring backpack to add to her gift.  i told her that i'd teach her how to use the sewing machine, which she was super excited about.

and then of course, finding the fabric was pretty much impossible.  either it hasn't been made yet, or it sold out insanely fast, but either way...we came up with nothing.  we were ready to ditch the idea until i thought of a plan b - bedsheets.  i'd seen them at target right around the time the movie came out on the disney channel, and when i went online, sure enough - they were available for pick-up at a local store.  that, too, sat around for the last couple of weeks until we finally decided to get started on it.

since my fabric scissors aren't made for left-handed use (the bean is a lefty), i cut out all of the pieces that she needed to make the backpack.  we found an easy tutorial to use, and after a really brief overview on the parts of the sewing machine and how to backstitch at the beginning and end of every seam, we got started.  she was nervous about using the machine and worried that she would either screw up or hurt herself, but i assured her that i was right there and wouldn't let anything happen to her.  and i'm not gonna lie - it was kind of painful sitting there as she stepped gingerly on the pedal and sewed at a glacial pace. 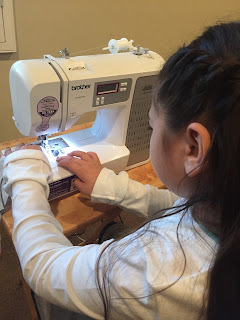 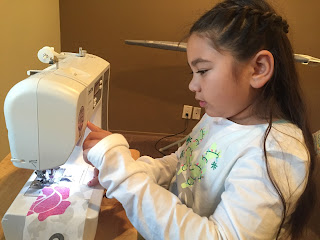 but her persistence and caution paid off as she finished her first seam and held it up proudly. 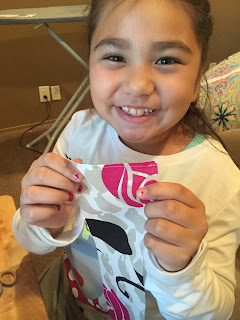 she even learned how to use an iron in the same session.  these are some pretty valuable skills that she'll be able to use for years to come. 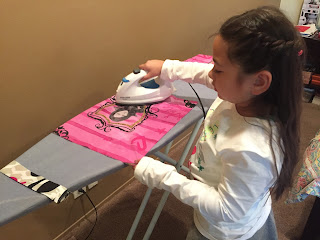 now, it took her about an hour and a half to get through sewing a project i would probably have finished in 20 minutes, but it was totally worth it.  i don't know who was prouder of this backpack, her or me. 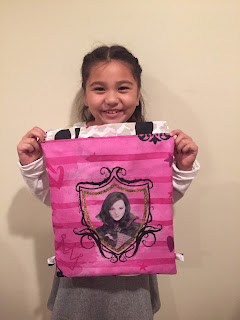 and check it out - it's even fully lined! 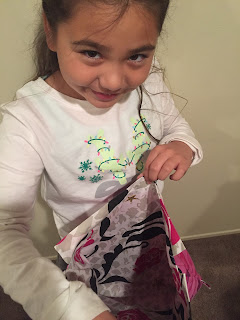 using some wide grosgrain ribbon, we got the straps in place and tied them together.  she gave them a tug, and voila: 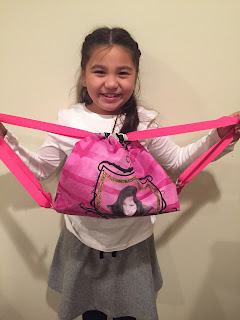 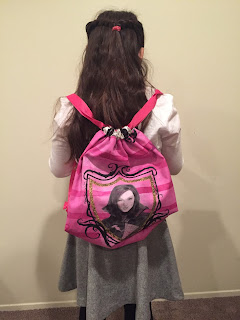 pretty sweet, right?  it's a really cute little backpack, and i hope the recipient loves it as much as my kid enjoyed making it.

now back to that doll.  she took out the pieces for the body and assembled it so that we could see what needed to be done: 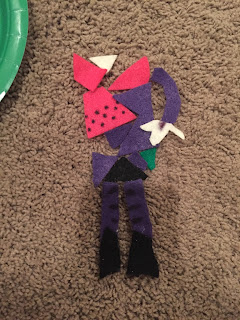 i told her that i would sew it together for her, but that she needed to show me exactly how each piece needed to be attached.  she handed me two pieces at a time, and i zigzagged it according to her precise directions.  it seemed to take forever, but we finally got it: 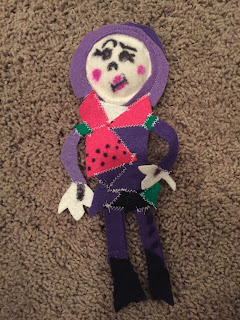 personally, i think that the visible zigzag stitches add to the overall look of the doll.  and she was really happy with how it turned out.

when i thought back on the whole process, i gotta say - yeah, she's my kid and of course i think she's brilliant.  but i think it goes beyond that - like, she's 8.  when i was 8, i could barely draw a basic picture.  but she really used her noggin and came up with a project that required a lot of thought to make it happen.  she figured out how to take a picture from the internet and use basic materials to bring her idea to life.  that's a lot of critical thinking that i would never have even imagined when i was her age.  does that make sense?  maybe i'm putting too much thought into this, but i'm really freaking impressed with her skills.

only makes me even more curious as to what she could be doing with her life in the next 10, 15, 20 years.  the possibilities are endless, and i can't wait to see what happens.

Email ThisBlogThis!Share to TwitterShare to FacebookShare to Pinterest
Labels: girl scouts, the bean can sew