squeezing one last trip in for the year

with the bean all done with school for 2015, we decided to take advantage of an extra bonus day of winter break by heading down to disneyland for the last time this year.  it was also the very last day that her pass was valid - we're now in the holiday blackout period and won't be able to go again until the first weekend of january.

we arrived bright and early and spied the new metal detectors at the security checkpoint.  rumor has it that they're randomly selecting people, and i've also heard that they're having every 7th guest go through.  this makes no sense to me, unless for some reason they have to pay per use or something.  if they feel the need to have the damn things, why not send everyone through?  anyone know the reasoning behind this?  because i don't get it. 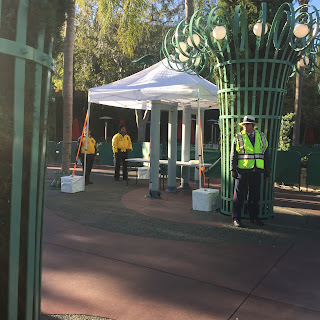 since we've gone to the disneyland side on our last few visits, we decided to head to california adventure for the day.  not to mention that i figured it would be a little less crowded over there, which would make for a really enjoyable day. 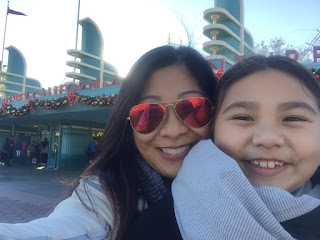 as we went through the gate, we were handed a couple of these, commemorating opening day of the new star wars movie. 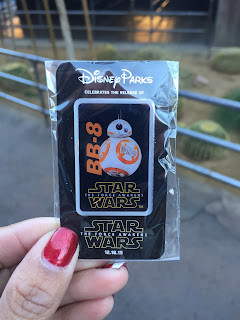 (too bad i managed to lose one of them somewhere along the way.  oh well.)

we made a beeline for cars land, hoping to get onto the radiator springs racers ride.  since the fastpass line was open (which is rare, since it's a super popular ride and passes "sell" out quickly), we stopped in and grabbed a couple to ensure that we'd get on the ride at least once.  the park had only been open for about 15 minutes and our return time was already at 10:35. 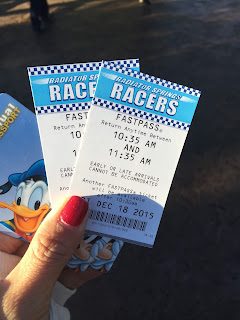 with zero line to say hello to mater, we stopped for a quick photo op. 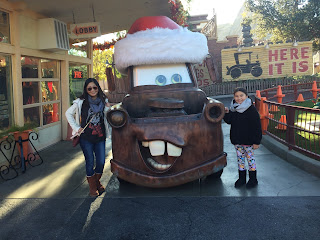 and then we headed over to the ride to see how long the wait was.  15 minutes?  another very rare sight for us. 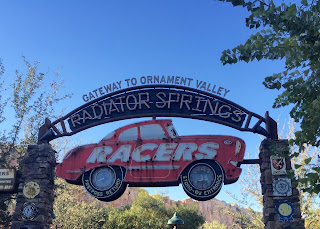 it was pretty accurate, and we were seated in practically no time at all. 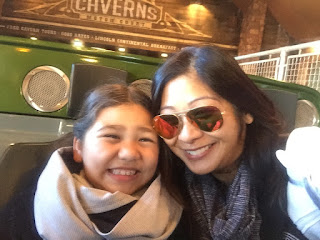 we could easily have gone back for another ride right away, but decided to head out and see what else we could do with little to no wait.  as we made our way out towards the pier, the bean said "i've always wanted to do this" and stopped here: 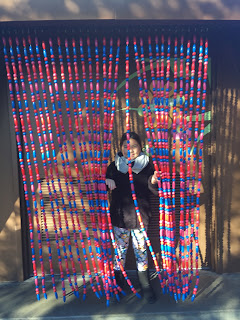 at the very back of the park, we scored yet again as the line for "toy story mania" was about as short as it ever gets. 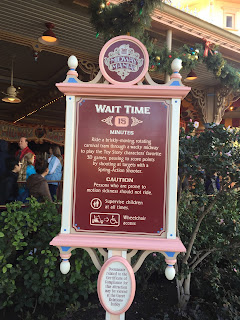 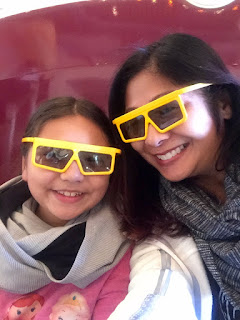 next up was a turn on mickey's fun wheel - the non-swinging gondola, of course.  the swinging ones make me really queasy. 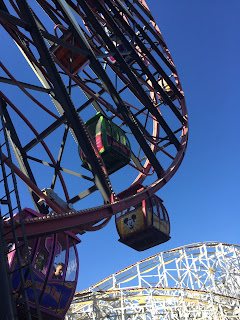 it was a beautiful day, and it was nice to take in the view from up high. 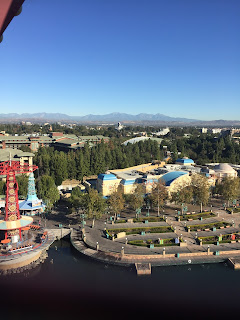 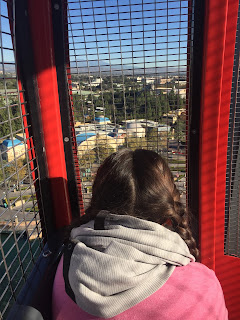 the silly symphony swings are a favorite of the bean's, but not for me.  i sat this one out and settled for watching her spin around with a look of pure joy. 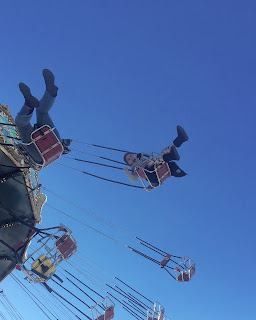 another favorite ride for both of us is goofy's sky school.  i always think of the old lady when we ride this - back when the park first opened, it was called "mulholland madness" and it used to freak her out like crazy (although she rode it every time). 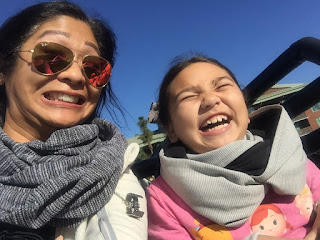 since we wanted to get in for one of the performances of the "aladdin" stage show, we took the short cut through a bug's land and stopped for another fun photo op. 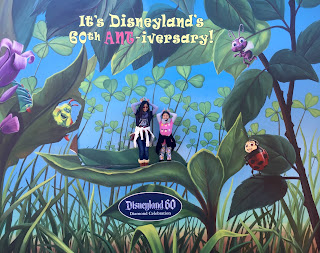 after a 13-year run, the show is coming to an end and being replaced with a "frozen"-themed production.  since that announcement, "aladdin" has been even more popular than before and they've had to use the fastpass system for seating.  without one, there's a good chance that your party will be split up or won't get in at all. 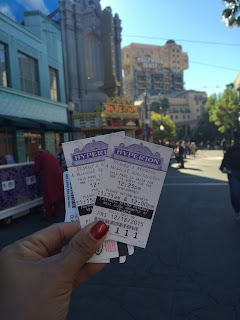 with our passes securely in my bag (which is also when i think i lost that pin, d-oh), we made another pitstop to say hello to another friend.  he looked about as happy to see us as we were to see him. 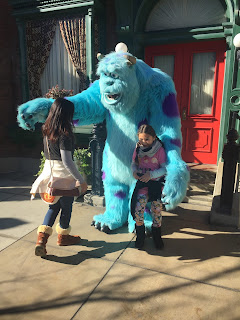 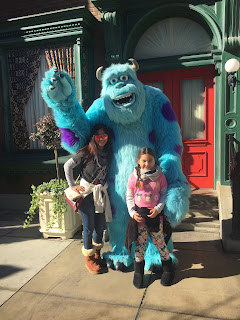 by that time, our fastpasses were valid for our second "racers" ride.  look at how long the standby wait was, just two hours later! 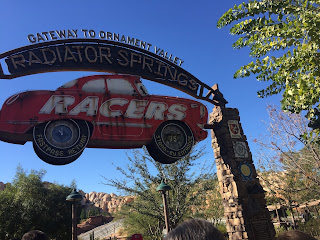 and this time, i got her to put her hands up for the picture. 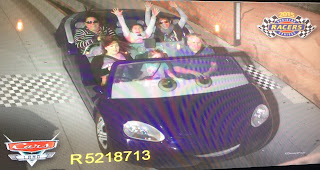 we had just enough time to grab a quick snack and head back to the hyperion theater to watch our show. 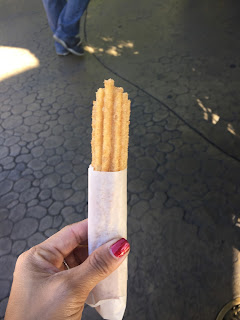 somehow, we managed to score seats in the orchestra section, right on the floor.  it was a nice way to relax and enjoy what was probably the very last time we'd ever see it. 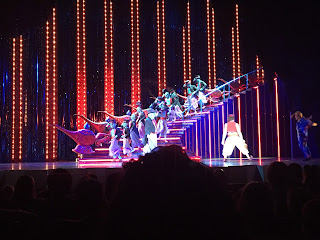 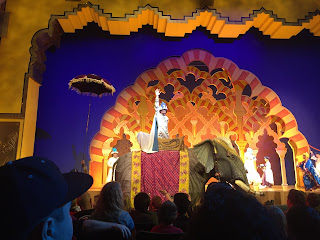 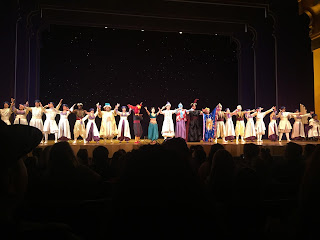 it really is a fantastic show, and i'm going to miss it a lot.  as popular as it still is, i wish they hadn't decided to shut it down.  we've seen it so many times over the years, but it's never exactly the same.  the genie always manages to throw in tons of jokes and current pop culture references, and it never disappoints.  so bummed.

from there, we stopped and grabbed some lunch - one of their giant smoked turkey legs that i swear is laced with some sort of crack, and supplemented it with a side of mac & cheese that the bean devoured.  then we headed over to another of her very favorite spots in the park, the animation academy.  we got to draw a few characters from "phineas and ferb," and then it was time to head out. one last tram selfie: 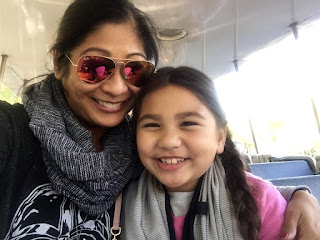 traffic was pretty gnarly, with our usual half hour drive home doubled.  and then it was a mad dash to get ready for the rest of our evening - we still had the usual friday hula class and girl scouts meeting.