she works hard for the money

i completely forgot to blog yesterday!  sheesh.  there is a reason for that, though, and it all stems from this photo: 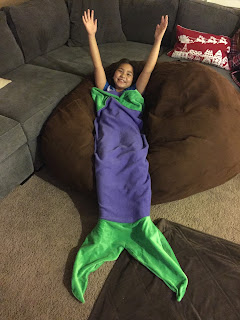 my co-leader and fellow sewing addict introduced me to a pattern for making those mermaid tail blankets.  they're actually more of a sleeping bag, since you crawl into it and snuggle up while doing your best ariel impression.  and the pattern comes in sizes that span from a size 1 all the way up to a full-grown adult.  i held off on it for awhile, but finally decided to hit up joann's and pick up some materials to give it a shot.  as you can tell from that photo, it was an instant hit.

but even more so once i posted it on facebook.  holy cow.  one friend immediately asked if i was interested in selling them, and - well, it would kind of be fun to be able to buy some christmas gifts on my own.  and also, i am a sucker.  once i said yes, i found myself with at least ten tails to make.  ha!  'tis the season, after all.

a trip to another local fabric store with my co-leader (who actually went all out and opened an etsy shop, racking up an impressive number of sales in the span of just one week) yielded enough material to cut out the first 8: 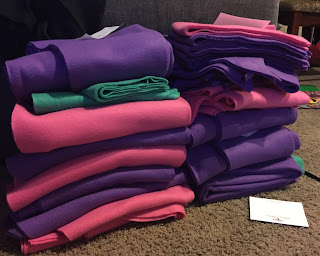 i spent my sunday sitting at my machines, cranking out one after another until i finally finished them all.  two broken needles, a lot of swear words and an assload of thread later, i had this: 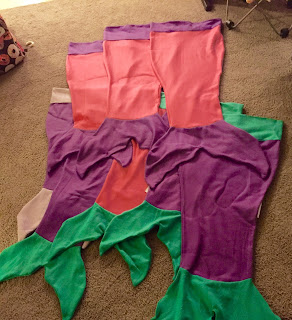 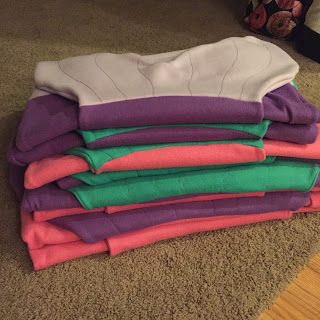 but it didn't stop there.  oh no.  because once i posted that picture of them folded and stacked, even more requests rolled in.  and so i headed back out to the fabric store and loaded up my cart till it could hold no more. 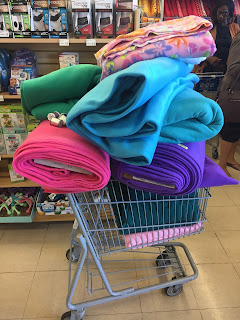 it took me an entire evening to cut out all of the pieces to make 15 more, and then laid them all out yesterday: 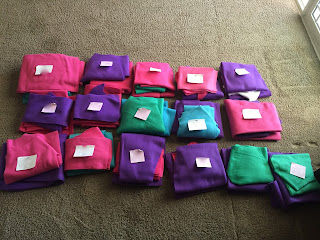 and even beyond those, i still have at least seven more to cut out.  i managed to eke out 7.5 of those by the end of the day, before my back gave out and i had to step away from the machines.  and thank goodness for all ten seasons of "friends" on netflix.  because while i'm totally occupied during the sewing process, it's nice to have something going on in the background that makes me laugh while not requiring my full attention.

i'm on a roll here, people.  my goal is to have all of these completely done by the end of the week, and if i can keep it up at this pace, i won't even be scrambling to finish two separate requests for cookies by saturday.

Email ThisBlogThis!Share to TwitterShare to FacebookShare to Pinterest
Labels: caught the sewing bug, everybody wants to be a mermaid