off-season is the best time of year

on the day after my birthday, the old lady and i had a date to head down to disneyland while the bean was at school.  i figured we could get in a bunch of rides and grab my annual birthday button, pick up a treat as a consolation prize for the bean and get back in time to pick her up from school.  easy peasy, right?

except that since now is disneyland's off season, the parks didn't open until 10am that day.  and then i remembered on the way to school that there was a room parent meeting right after drop-off that morning.  d-oh.  and i so wasn't dressed for a meeting with school people... 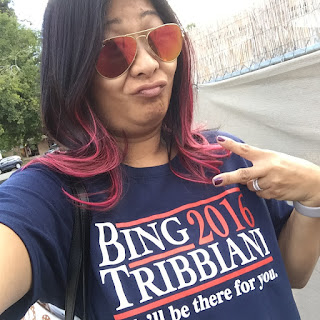 oh well.  i managed to get through the meeting, which went a lot faster than i'd expected, and headed home to get changed.  because of the random mid-morning hour, there was a lot less traffic than usual and we got down to anaheim fairly quickly.  even better, we scored a really sweet parking spot in the parking structure not too far from the escalators.

it was nice to be there and not have to fight through crowds to get around.  we headed right over to space mountain, which had recently been switched over from the star wars-themed "hyperspace mountain" to its halloween counterpart, "ghost galaxy."  on our way there, we passed a few storm troopers who were hanging out with the people in line for star tours. 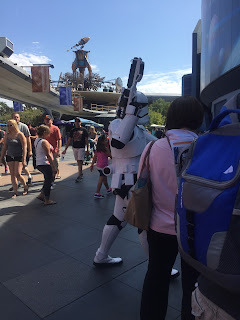 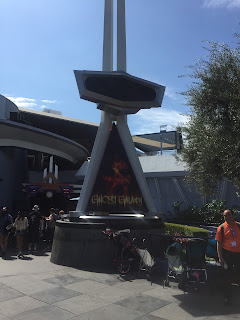 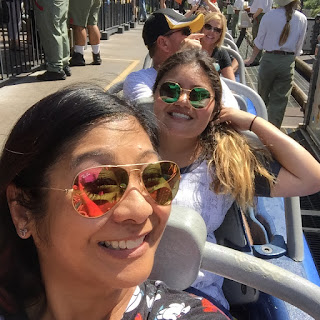 i got my birthday button, by the way, and snagged a fun castle photo without too much eye-rolling from my date. 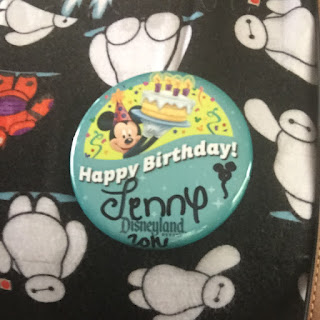 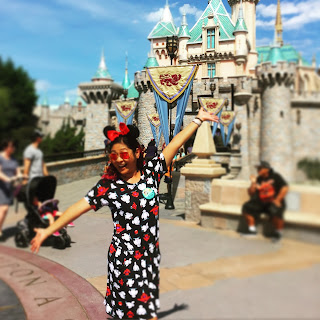 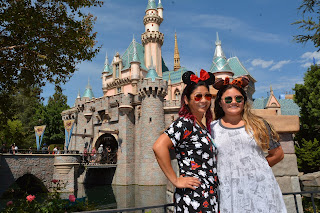 we headed over to check out the haunted mansion, all dressed up for halloween with the annual "nightmare before christmas" overlay. 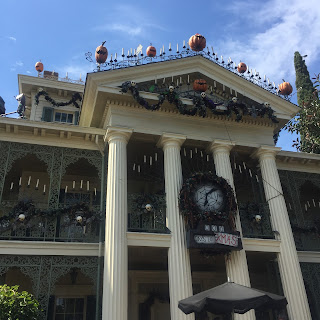 ghost galaxy is creepy.  the ride itself is the same as always, but the imagery and the sounds of the ghosts and zombies and stuff...ew.  i hate haunted houses, and this is as close as i get. 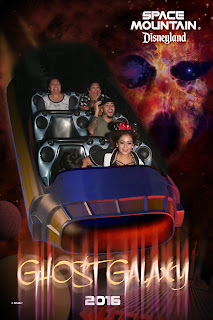 the bean hates splash mountain, and the old lady doesn't like getting wet on rides.  but it was an incredibly warm, humid, sticky day.  so we grabbed a fastpass and made it our last ride for the day on the disneyland side.  i ended up getting seated right in front, which i don't remember ever happening before, and i wasn't sure how i felt about that. 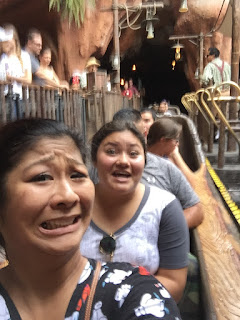 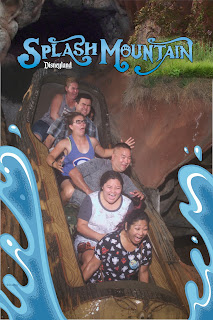 and of course...we both got drenched.  from head to toe.  the old lady was wearing jean shorts, which we all know is probably the very worst thing you can have on if you're going to walk around completely wet.  and so we made a beeline for main street to find her a new pair of shorts to wear for the rest of the day.  once she was changed, all was well.  she even consented to stopping for one last photo op: 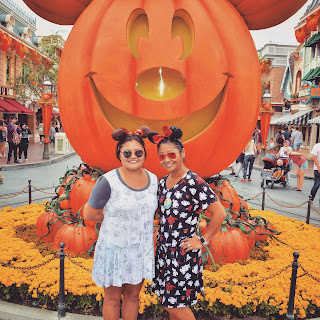 over at california adventure, we headed over to schmoozies to grab something to drink.  it's only open seasonally now, so we were a little surprised to see it ready for business.  i got the golden icicle lemonade, which is insanely sweet but so tasty...kind of like a liquid jolly rancher. 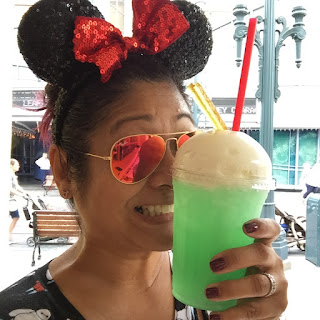 she opted for the seasonal drink, a caramel apple smoothie.  and she said it was good, but super duper extra sweet. 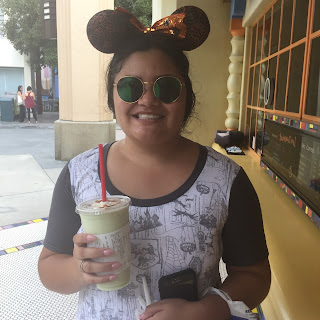 we only rode a few rides on that side, because it was getting late in the day and we needed to get home soon.  but we managed to do soarin', radiator springs racers, and of course - tower of terror.  we have to get in as much of that one as we can before they shut it down in january for the switchover to guardians of the galaxy. 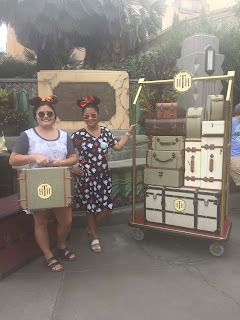 the hub happened to be home as we were fighting traffic to get back, and so he picked up the bean for us at school.  she was a little put out when she saw that we'd been to the 'land without her, but when we presented her with a delicious mickey-shaped, chocolate-covered rice krispy treat, she got over it.