today is the official start of the "17 classes in 30 days" challenge at xtend barre.  i like participating in these things because it makes me get my butt to class on the regular, which will help me with one of those 2017 goals i committed to.  and this past weekend, we gathered at the studio to do our official starting weigh-in.  this machine, brought in by a local fitness supplement store, is pretty intense. 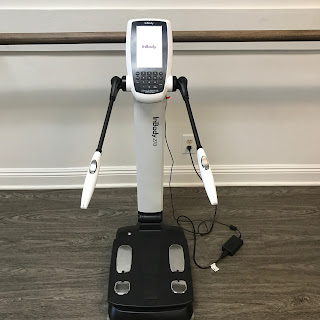 you wipe off your feet with a cleansing wipe and step onto the metal plates.  first it weighs you, and then you grab those white handles and place your thumb on those little metal plates.  you stand there with your arms at your sides for about a minute while it calculates and measures and all that fun stuff, and then when it beeps you step off and the results slide out of the printer.  it looks like this: 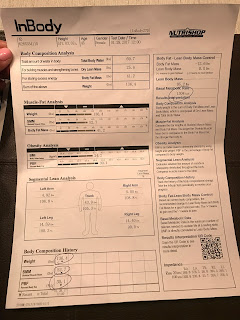 you get some pretty interesting data like your basal metabolic rate, which is the number of calories you would burn if you just laid around doing nothing for an entire day.  it also gives you how much of your weight is in muscle and in water and other fun stats like that.  bmi is covered too, but we all know that's bullshit anyway - some sort of calculation created back in the 50s that really doesn't apply to today's society.  i try really hard not to dwell on the actual numbers, but it's hard not to fixate on them.  whatever.  as long as my clothes fit i guess i should just be happy.

the old lady doesn't have time to do as many classes as the challenge requires, but she's going to get in there at least once a week with me.  and the owner of the supplements store invited us all to come in and have him create a meal plan and suggest supplements for us whenever we wanted to and asked us to commit to coming in at least once every two weeks to do another weigh-in and see our progress.  so she and i headed over there to do just that, and she got to step on the machine and get her own printout.  our meal plans look like this: 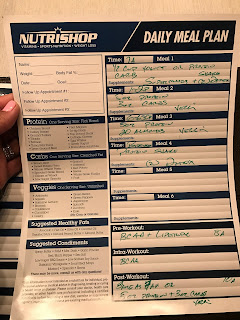 it's fairly strict, but it's doable, and we started it yesterday.  it started with a protein shake using almond milk, which was really good and pretty filling. 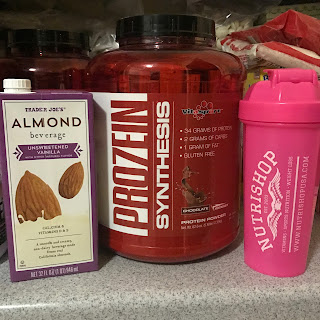 my next meal was 5 ounces of egg whites that i fried in a cast-iron pan using some ghee, which is something else i'd never had before.  i placed the crispy eggs on a bed of arugula that i'd dressed with some olive oil and sea salt and then added a slice of sprouted multi-grain bread with some crunchy almond butter. 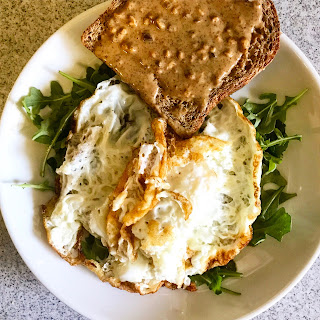 i had some baked chicken and quinoa for my third meal, which wasn't interesting enough to take a picture of.  but dinner was this - ground turkey topped with some homemade marinara sauce and more arugula.  this was really tasty and i can't wait to have it again. 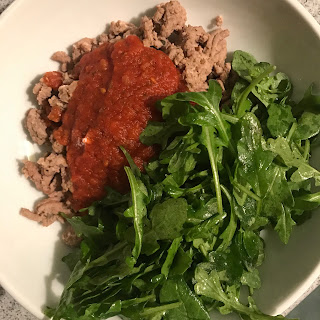 it's kind of weird to look forward to bedtime, so that i can have a protein shake and get in something sweet, but that's exactly how i was feeling yesterday.  i don't know how strict i'm going to be with this  part, because to be honest i didn't really set any particular goals other than to eat healthier.  and it helps to do it with a buddy, because what i'd like is for this to also affect how the bean and the hub eat at home.  less crap, more veggies, better food, everybody wins!
at February 01, 2017

Email ThisBlogThis!Share to TwitterShare to FacebookShare to Pinterest
Labels: 17 in 30 challenge, eating healthier