this weekend, the bean performed with her cheer squad in their second competition of the year.  while the makeup deal is still not her favorite thing in the world she was a lot more cooperative this time around, which made the morning a lot easier on everyone.  we had her dressed, ready, and at the team mom's house exactly at 8:30. 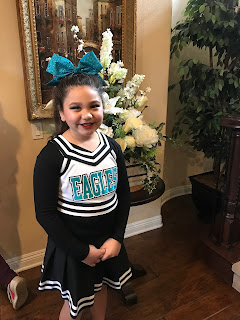 after ensuring that everyone had the right hair, makeup and bow on and turned in their waivers, we all piled into our cars and drove the short distance to azusa pacific university.  it was really nice not to have to travel too far again - as i stood in line to buy my entrance ticket i could hear chatter all around me that told me that not everyone was as lucky.  there were folks there from san diego, northern california, one squad from washington state and another from arizona.  and the insane rainstorm they'd had to drive through the night before couldn't have been fun.  at least the skies had cleared up somewhat by the time we were all waiting around outside. 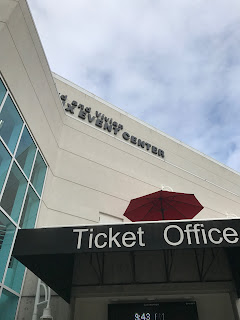 it was the same venue as the last competition, but it looked pretty different.  the other side was blocked off, and there was lighting and a fancy sound system and even a stage at one end where it looked like we'd be treated to some live music at some point. 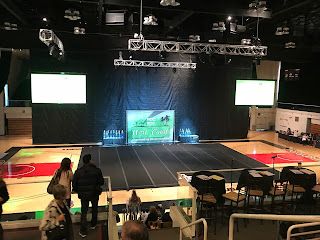 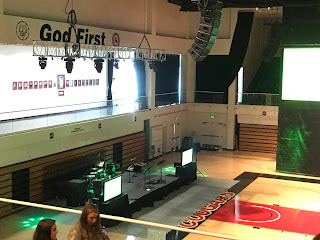 this competition was for christian schools and clubs, so there weren't as many teams this time.  they started things off with the teeny-tiny kids before jumping to middle schoolers and then it was our girls' turn.  the bean starts off on the far left and moves her way around throughout the routine, and then by the end she's at the front on the right side. 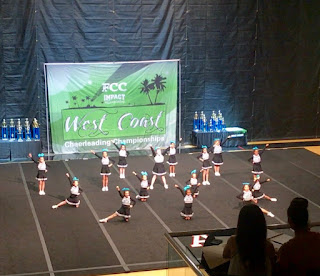 they looked good and seemed to get through their routine without any hitches, and i knew they had to be relieved to get it done.  when they finished, we headed outside to see them and break for lunch. 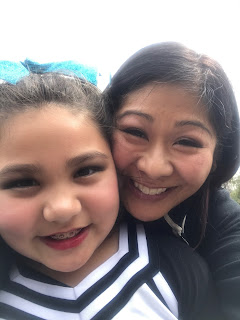 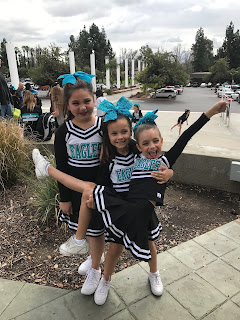 the APU acrobatics team was there working the event, and had brought in the in-n-out truck as a fundraiser.  by the time we went out there, the line was pretty long and i wasn't even hungry yet. 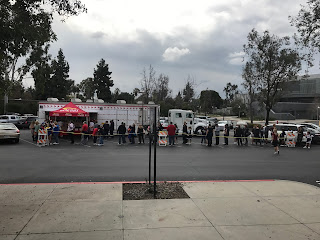 i'd brought a sandwich and some other snacks for the bean, along with a protein shake for myself.  but when one of our friends offered to head out for a mcdonald's run, i knew the bean wasn't going to want that sandwich.  oh well.

when break was over, the girls gathered together down on the floor, where we listened to APU's worship team sing a handful of songs and then a pastor came to offer some words of prayer before the awards were given out. 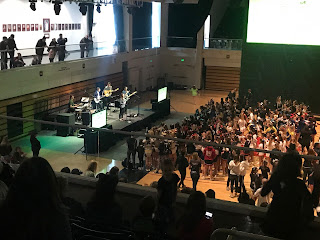 the school's varsity squad consists of a mere five girls this year.  they also happened to be part of what ended up being the biggest division of the day, where they were competing against squads that were three and more times their size.  but they'd worked their asses off and gave a flawless performance, which earned them not only first place but the grand nationals title.  pretty awesome.

the bean's JV squad was up against four other teams, and they managed to snag third place.  i knew the bean was bummed not to take first, but i reminded her that they'd done a great job with a brand new coach, had a few girls on the squad who were cheering this year for the first time, and they'd given it their all.  not to mention, it's always good to place in the top three!  they were all proud of themselves for their hard work, and rightfully so.

with the pressure off for the time being, they enjoyed their last few minutes together and blew off some steam with a fun jumpy picture.

and then they got to have some sugar, courtesy of one of the moms who'd brought some delicious-looking cupcakes.

we may have one more competition before we wrap up this year's cheer season, and the bean has already told me that she's definitely in for next year again.  it'll be her last year on the JV squad before she gets to try out for varsity when she hits the 5th grade.  not only that, but she's also decided to commit to a competition squad that one of her friends is in.  it's a more serious deal, with the twice-weekly practices starting just a couple of weeks after school lets out and runs through the end of next february.  they do a minimum of 5-6 competitions throughout the year, and i'm actually really excited to see her get back into tumbling classes and hopefully gain more confidence in her back walkovers and front roundoffs.