living the (one) dream

the bean is settling very nicely into the routine of practices with her new cheer team.  in addition to their twice-weekly regular sessions, they've also added the option of extra practices.  if any of the three teams within the squad have had numerous missing members during regular practice, the coaches expect those girls to come to those bonus meetings.  i was a little concerned about how she'd do with all of this - although it had been her decision to join this team, i wasn't all that sure that she fully understood the commitment she'd signed up for.

luckily, it only took a couple of sessions before she got in the car one day after practice one day and said "mom...i really like being in one dream."  phew.

i sat in on one of those bonus practices last week to see how things were going, and it was fun to see her and the rest of the girls in action.  they showed off a pyramid for us at the end: 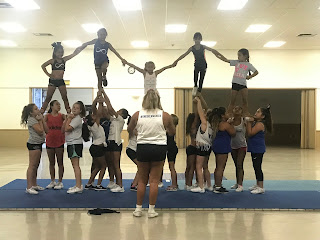 a portion of their team fees was earmarked for a professional choreographer to fly out and work with the girls on the routines they'll be performing numerous times during competition season.  those sessions took place this weekend, with two of the three teams signed up for four hours of choreography on both saturday and sunday.  i talked it up to the bean, giving her lots of encouragement while at the same time trying my best to impress upon her how important it was that she stay focused and pay close attention.  she's been cheering with her school squad for five years now (!!), but i had a feeling that this would be on a whole other level.  like comparing apples to oranges.  and yet i didn't want to scare her either, so i did what i could to walk that fine line.

although summer has been easy breezy for us, with no bedtimes and no set routine other than cheer practice, i had to get her to bed at a decent time so she'd be rested and ready.  she was awake even before i went into her room to wake her up as she'd requested, and mentioned that she was a little nervous for what the day had in store for her.  i assured her that she'd be just fine, and then distracted her by tasking her with mixing up the pancake batter for breakfast.

before long it was time to get ready, which meant putting on her official practice gear and slicking her hair up and back into a high cheer ponytail complete with gigantic bow. 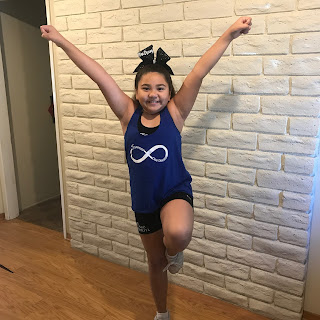 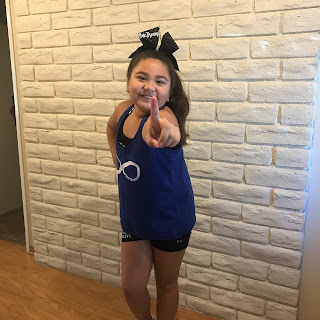 and how cute is her backpack?  i love how sparkly and pretty this thing is, and i kind of want one for myself. 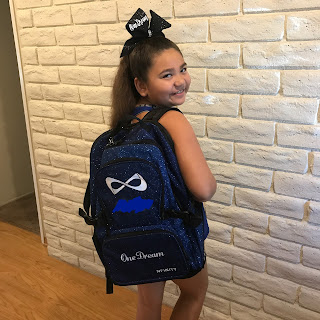 we arrived at the gym a few minutes early, and after a hug, a kiss and a quick selfie, she headed off to do her thing. 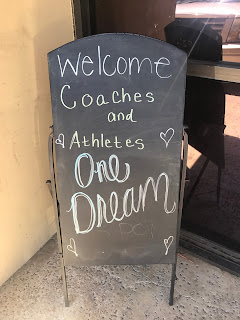 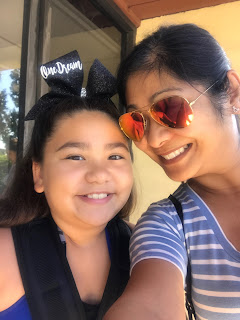 parents were not allowed to stay for these practices.  probably because we'd be too much of a distraction, and the girls and the coaches really needed to focus on soaking in every minute of the choreographer's time.  but thanks to facebook live, we got to see snippets of what their day was like.  i could catch glimpses of my girl here and there, and i could tell that the years of dance and cheer training were kicking in and she was picking it up easily.  i could also hear how the choreographer was speaking to the girls - tough and curt, and no kid gloves or mollycoddling happening there.  i just knew that would be the bean's biggest complaint.

and sure enough, when i picked her up she was quiet and visibly a little shell-shocked.  heh.  and all i could think of in my head was "welcome to competitive cheer, kid."

"he was SO strict, mom," she said.  and i just explained to her that he was being paid to do a job, which also meant he was going to be tough on them to get them to do their best.  she seemed to understand, and she was quiet for the rest of the drive.  we grabbed some lunch on the way home, and  as soon as she got some food in her belly and stretched out on the couch she passed out cold. 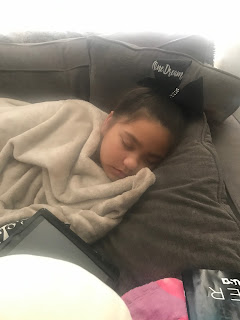 she had one request that evening, and that was for a slice of really good chocolate cake.  i offered to bust out a recipe i had for cupcakes for two, but that wasn't what she was looking for.  "i really want a SLICE, mom," she said.  and so we went to the one place i could think of that would fulfill that craving:  claim jumper.  because that's where you can get this gigantic thing called the chocolate motherlode: 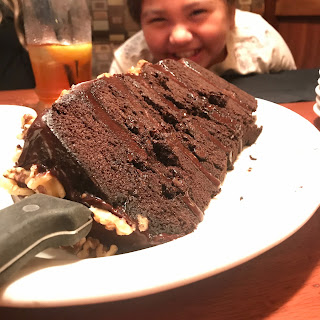 we split that huge slice between the five of us - the bean, the hub, the old lady and her special friend and me.  SO YUM.

gotta love getting to reap the benefits of my kid's calorie burning.  heh.
at August 01, 2017