the last hurrah before 4th grade

the bean's school always chooses to start on a tuesday.  i think it's weird, but whatever.  since it was the old lady's day off and we needed to get the bean good and worn out so she'd get to bed on time, we got up early and headed down to disneyland for rope drop.  we'd had pretty much zero bedtimes all summer long, which was pretty lovely for all of us, but now it was time to get back to business and fall back into the old routines.

because she hadn't been in awhile, it wasn't too hard to get her to get up and ready that morning so we could get to the gates by 8am.  we even had time to stop at starbucks for some breakfast before weaving through the morning rush hour traffic.  parking and boarding the tram was surprisingly easy, and when we arrived at the front gates and checked the disneyland app we realized why - the park didn't actually open until 9.  d-oh. 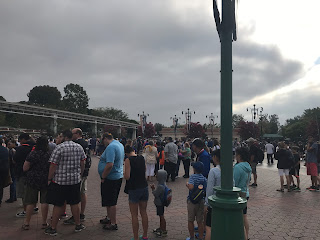 and across the way, there was already quite a large crowd for california adventure...and they weren't even scheduled to open until 10! 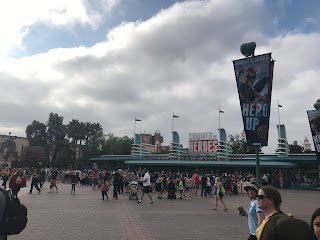 we decided to kill sometime and walked around the world of disney store for a bit.  disney recently released some rose gold sequined minnie ears that i really want, because rose gold is my jam, but they've predictably sold out resort-wide with no restocking in sight until at least october, according to cast members we asked.  boo.  and so after we wandered through the store we headed back to the gates to join the lines.  a little before 10, they started letting guests in to make their way into the parks and wait for the ropes that guarded the entrance to the various lands to drop.  as we usually do, we made a beeline for tomorrowland to get fastpasses for space mountain. 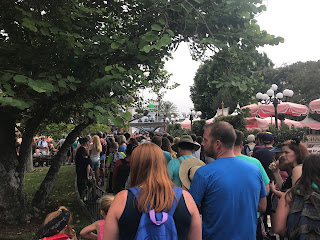 our first ride of the day was the matterhorn.  we hadn't been on it in awhile - they recently installed fastpasses for it and all it seems to have done is slowed the line down.  you used to be able to get in the standby line even when it was wrapped halfway around the mountain and still be on the ride in about half an hour.  but now, with fastpass guests given priority, the process is much slower and takes closer to 45 minutes.  oh well. 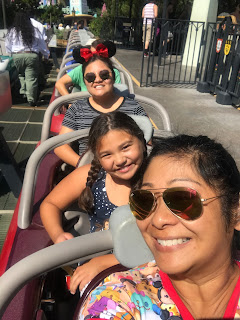 the disneyland railroad had also recently been reopened after an extensive, year-plus long redo.  the line to board the train at main street was crazy long, but we got on at the tomorrowland station with almost no wait and just one family ahead of us. 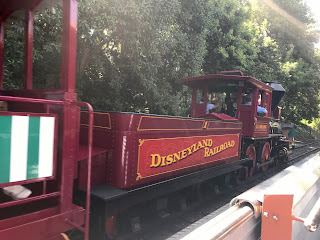 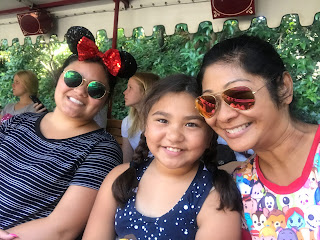 it was fun to see the changes they'd made along the route during the long overhaul.  of course, we still couldn't see into star wars land yet (which was the reason for the closure to begin with), but that's okay.  we were just glad to have the ride back. 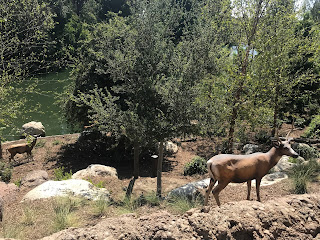 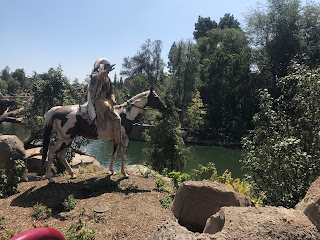 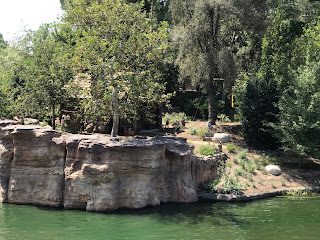 by then, we were ready for some grub.  having seen a post about their current seasonal "milk & hunny" funnel cake, we knew we wanted to head over to the hungry bear restaurant for lunch.  it's not a typical spot for us, so it was nice to try something different.  and along with our cheeseburgers and fries, we also picked up their seasonal offerings.  here's the funnel cake - it's drizzled with sweetened condensed milk and honey and topped with whipped cream (mickey-shaped, of course) and some sparkly golden sugar. 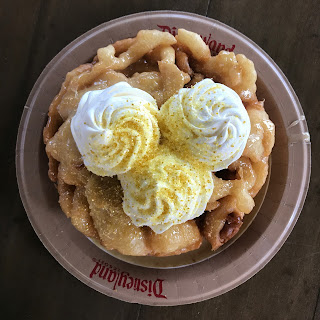 this was their lavender sparkler - lemonade with lavender and elderflower syrup.  i don't like food and drink with floral notes, but the old lady digs it and said this was really good. 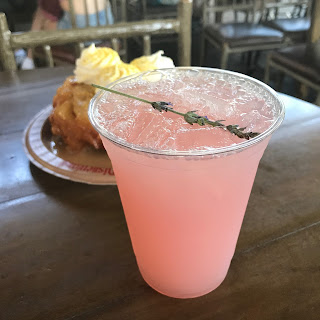 another ride recently reopened after a long time-out was this: 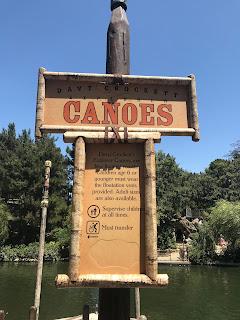 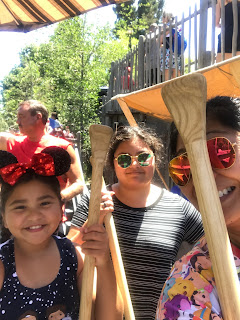 there's no track or anything for this ride.  you literally sit in the canoe two by two and use those oars to row your ass around the rivers of america.  and if you're stuck with people in front of you who either have no rhythm or just simply get bored or tired and decide they're not going to row anymore, you get quite a workout.  not that that happened to me or anything.  hmph.

space mountain was a blast as always.  it was the first time in forever that the bean had gotten to ride it without any special overlays, and she was surprised at how different it was when it was back to normal.  she's also the one who dictated our photo pose, which i'm sure you can tell. 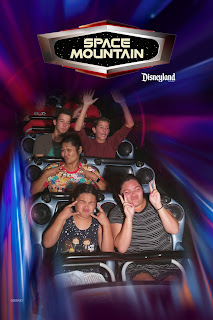 we stopped to look at snow white's grotto and let the bean check out the wishing well on one side of the castle before we left for the day. 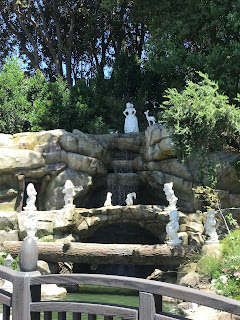 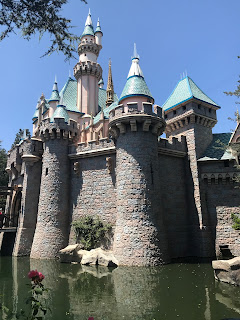 Email ThisBlogThis!Share to TwitterShare to FacebookShare to Pinterest
Labels: disneyland, summer vacation is over